Overcharged AC:  Everything You Need to Know 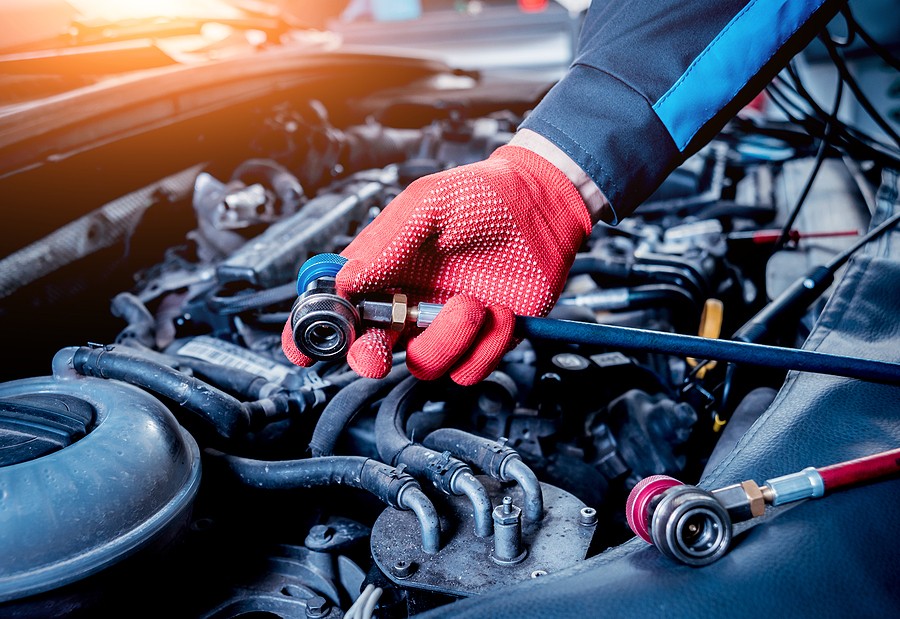 Air conditioning is one of those luxuries that really can make a long drive on a very hot day tolerable. Of course your car doesn’t need air conditioning to function, but it definitely makes it more enjoyable and you paid for it with the cost of your automobile so you want to make sure it's working the way it's supposed to. If you're finding that the air is blowing only slightly cold or not cool at all then you may be tempted to buy a can of refrigerant and top up the system so that you can enjoy a blast of cold air on a hot day. But, if you're not careful, it's entirely possible that the system could become overcharged which presents a whole new set of difficulties for you as a car owner. Let's take a look at what happens when your air conditioner gets overcharged, and what you can do to fix the problem.

What Happens if My Car AC is Overcharged?

Lack of Cooling:  The best sign you'll ever have that there's something wrong with your air conditioner is that it's not able to cool down the air in your car. If you turn on your AC and you're not getting any cold air even after several minutes of operation then there's definitely a problem with your air conditioning unit somewhere along the lines. If it's been overcharged that means the refrigerant is unable to expand in the system. The way it works is through a cycle of expansion and condensation, changing state from a gas to a liquid and back again. This chemical change is what creates the cooling action. However, if it's overcharged then it's going to remain in a liquid state the entire time because there's no room for it to expand into a gas. Without that change of state, the chemical reaction that reduces temperature won't happen. The result is that you'll just get air blowing at the ambient temperature.

Poor Engine Performance:  Because your air conditioner takes up quite a bit of power when it's running normally, when it's overcharged the situation can get worse. Because the air conditioner is going to struggle to push refrigerant through a very small nozzle that should be moving refrigerant in a gas form but it's now trying to force larger liquid molecules of refrigerant through the hole it's going to tax your engine. The compressor in your AC is working harder, that requires the drive belt connecting it to your engine to spin faster, which in turn means your engine has to work harder. Not only can this potentially destroy the belt itself, but it's also going to draw more power from your engine which will cause your engine to struggle to keep up with the rest of its duties. That translates as problems with acceleration, bad fuel economy, and less power over all anytime you're driving and trying to run your air conditioner at the same time.

Compressor Noises: The compressor in your air conditioner is going to have to work much harder to force the coolant through the lines when the system is overcharged. As we stated already the liquid in your air conditioner is supposed to change form into a gas and then return to a liquid state again. However, since there isn't enough room for this change of state to occur the compressor is being forced to exert even more pressure to force liquid through rather than forcing a gas through. The result of that is you're actually going to be able to hear the compressor struggling to get the job done.

It's possible, depending on the make and model of your car, that this will not actually occur because some newer air conditioners have emergency bypasses in them that will switch on when sensors indicate that the pressure is too high and your pump is in danger of being damaged as a result.

Broken Compressor: The noises that you hear are the first indication that your compressor is struggling with the overcharged air conditioning unit. However, if you allow this to go on for too long, then the compressor is simply going to break down because it's unable to handle the excess load of coolant that it's trying to force through the system. Within the compressor itself there Is going to be a failure of various valves and seals that will break because of the excess pressure. Your compressor will shut down and your air conditioner will no longer function. This could bring with it a fairly hefty repair bill. While a new compressor could cost between $200 and $500 from AutoZone, once you get a mechanic to install it the entire repair bill could be anywhere between $500 and $1,000. That's reason enough to make sure you are taking care of your air conditioner compressor and not allowing it to be overtaxed this badly.

No Air at All:  A lack of cool air may be one of the symptoms of an overcharged air conditioning unit, but another potential symptom is the lack of air at all. This is not true of every vehicle but on some makes and models if the system is badly overcharged the sensors in the air conditioner will be able to detect the problem with the pressure and, as a safety measure, will not allow the air conditioner to turn on at all. In an effort to prevent further damage from occurring and as a result when you try to turn the air conditioner on nothing will happen at all. Not only will you not be getting cool air, no air whatsoever will be blowing through it. As you can see, with the cost of repairing a broken compressor, the safety measure is actually a good thing. It is going to potentially save you a lot of money in the long run.

What is the Correct AC Pressure on a Car?

What is the Difference Between Freon and Refrigerant?

It's worth noting that people often refer to topping off your air conditioner as adding more Freon to the unit. Freon has become something of a stand-in term for refrigerant, in the way that you might say Kleenex instead of tissue, even though all Kleenex is tissue but not all tissue is Kleenex and all Freon is refrigerant but not all refrigerant is Freon. In fact, Freon isn't used any longer because it's been banned for many years.

Freon was created in the 1930s and is what is known as a chlorofluorocarbon or CFC. Since the year 2003 vehicles were no longer allowed to use Freon in the air conditioning systems because it's so dangerous. All Freon based systems were required to be replaced, and it's illegal to try to refill a Freon based air conditioner system any longer. As of the year 2020 you can't even manufacture a cooling system anywhere that uses Freon any longer. All of this is because Freon, as a CFC, causes extreme damage to the Earth's ozone layer.

Freon was eventually replaced with a chemical called Puron, and nowadays when you are looking for a refrigerant, you're probably going to be buying a canister of something called R134A. This stuff is fairly inexpensive, and you can buy a can on AutoZone for around $28.

If you mean to top up your own air conditioning unit you can buy a can and do it yourself with a fairly simple tool. However, removing it again is not so easy. R134A is much safer than Freon, but by no means does it make it something that you want to be exposed to. It's still dangerous, it's just far less dangerous for the environment than Freon was. Handling it requires caution and safety equipment, and because it is a refrigerant you definitely don't want to be exposed to it at all.  This can cause serious damage to your skin if you were to come in contact with it.

How to Bleed an Overcharged Car AC

Even though it's possible to top up the refrigerant in your air conditioner at home, unfortunately the reverse situation is not true. You absolutely cannot and should not try to bleed off the refrigerant on your own. As we said, the chemicals in your air conditioning unit are very dangerous. They're dangerous to get on your skin and they're dangerous to breathe in. Even though Freon has been banned, other coolants like R134a are still not safe.

Because of the danger of these chemicals it is actually illegal to simply try to remove them and get rid of them on your own. Discharging an AC system requires legal certification. You have to be fully trained and you also have to have a safe and secure way to dispose of the refrigerant once it's removed from the system. Because it's under pressure it needs to remain under pressure and be stored in a pressurized container once it's been removed. You can only get this done at a licensed business, such as a mechanic who's been trained to do this, in a way that is safe and secure.

A mechanic uses an airtight seal in a vacuum system to remove the excess coolant from your AC. The whole process is going to be secured and closed so that nothing will leak out and there is no risk of danger exposing yourself to the compressed chemicals in your AC system. It's probably going to cost somewhere between $150 and $250 to get this job done.

Even though it's possible to buy some refrigerant on your own and top up your car's air conditioning system when you feel like it's not working the way it's supposed to, it's probably best to get a professional to handle this job for you if you've never done it before. Once you’ve added too much refrigerant into the AC, there is no safe way for you to get it back out again and it could be very dangerous to even try. Since a professional is going to be needed to get it out, you may be better off getting a professional to put it in the first place to save yourself some hassle in the long run.

PrevPreviousSymptoms of a Bad Fuel Filter – What You Need To Know!
NextEngine Sludge Symptom – How Serious Is Engine Sludge? Next