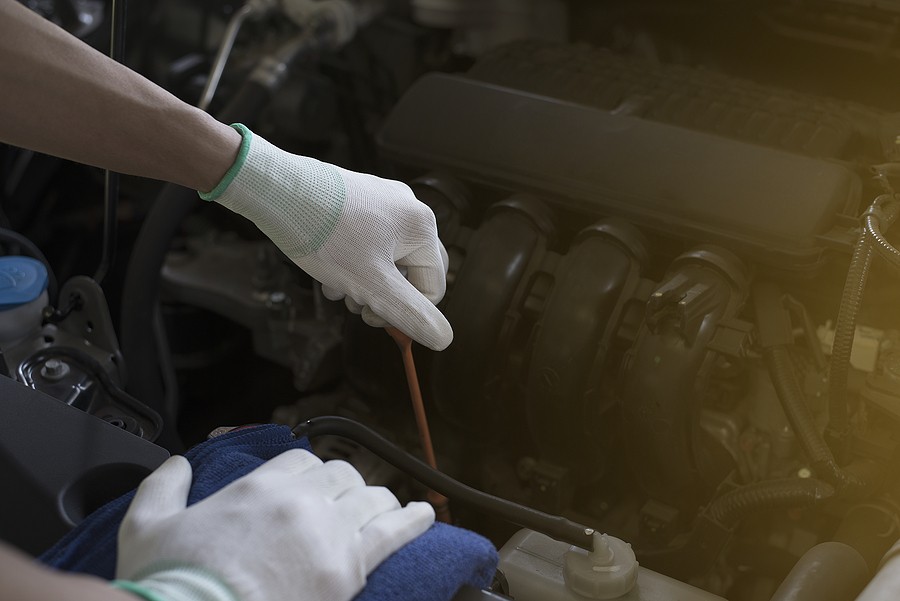 If the motor oil is not at the right level and has low engine oil, you will notice the engine overheating and the engine deteriorating much quicker than usual. Preventing low engine oil symptoms can protect the lifespan and lengthen the longevity of your engine. The only way to keep your engine running at a high level for an extended period is to have the right engine oil pressure in your car.

Having low engine oil in your vehicle can lead to an ever-growing problem. Keeping your oil at the correct level can prevent your car from breaking down, parts from getting worn out, and your car from having more severe replacements and repairs over time. Let’s see what the most common low engine oil symptoms are.

Possibly the most noticeable and the first symptom that most drivers and passengers notice in their car is that the oil warning light has flashed on their dashboard, indicating there is a problem you need to take care of immediately. This suggests that you have low oil pressure since there is not enough oil in your engine to run the car smoothly and adequately.

Inside your car, a sensor is in charge of detecting the engine oil level in your car. It is also in charge of analyzing the amount of oil pressure present in your vehicle. Low engine oil symptoms can trigger this sensor to realize there is a problem. As a result, the oil pressure warning light will come on due to the low oil pressure.

As a driver, you need to take this warning seriously and add more oil as soon as possible to alleviate the low engine oil symptoms.

Another noticeable sign of low engine oil symptoms is knocking noises and loud sounds coming from your car. Since these sounds will be audible to both the driver and passengers, this is a symptom that is easy to notice early on in the program. You will only see this symptom if you have had a reduced amount of engine oil for a while, so you need to get it fixed right away if you hear the sound.

When your engine and parts components lack lubrication and frequently rub against each other, causing excess friction and heat, the engine rods become looser and unable to function at the right level. Once this happens, you will immediately notice the low engine oil symptoms.

If you are not sure what the engine rods do in your cafe, the rods play an essential role in keeping the pistons secured and connected. If the rods become loose over time or due to damage, they will get thrown around and cause the loud knocking sounds in your car. In cases where you do not have low engine oil, you might just need to add an oil additive to remedy the low engine oil symptoms.

The third sign of low engine oil symptoms in your vehicle is the burning smell. Any smell in your car is not acceptable and usually indicates a problem, but a burning smell is a severe smell that generally signals a severe problem.

Your engine has many components and parts that work together to run the car smoothly and efficiently. Most of these internal parts and mechanisms are made of metal, and they frequently come in contact with other metal parts, leading to increased friction and heat. All of this metal rubbing against other metal pieces leads to a buildup of heat.

As we know, the oil is the lubricant that prevents heat from getting to the engine’s point of danger. If the oil is too low and notices the low engine oil symptoms, you will surely see that the engine is not cooling off during use. If the engine can’t cool off, you will notice a burning smell in your vehicle’s cabin.

If you need to know for sure that your car has low engine oil levels, then a dipstick test can help put your mind at ease and figure out if the low engine oil symptoms you have are directly related to the ensign and the oil or something more severe. Make sure that your engine is turned off and has cooled before you do this test.

If the dipstick shows that you have less engine oil than the minimum requirements, you need to add more oil to your car to keep it running safely and smoothly. Adding more oil to a low level can prevent any further low engine oil symptoms from happening in your car.

If you take care of your vehicle and notice the low engine oil symptoms before this point, you can save yourself a lot of trouble and heartache. However, if you continue to ignore the obvious warning signs, then your engine will eventually fail. This can lead to you purchasing an entirely new engine or a new car, which will cost you in the tens of thousands of dollars.

The lack of engine performance is due to the lack of fluid. If the engine does not have enough fluid to lubricate the engine’s parts, the engine will be under more stress and have to work harder. The harder the engine works, the lower your miles per gallon will be.

Along with symptoms of low engine oil pressure, you also need to know the root cause of this issue so you can prevent it from happening in the future.

Although this sounds like an obvious factor, low motor oil and low engine oil are key causes of low engine oil pressure. Sometimes, car owners may forget to do their periodic oil changes or skip routine maintenance altogether. They might have lost track of time or do not want to spend the extra money.

However, if they do this, they will soon notice low engine oil symptoms. Another reason why you might not have enough oil, and you have low engine oil symptoms is a leak in the supply lines. The leak can cause the lubricant not sufficiently to get to the parts, causing overheating and friction. The oil seals and plugs can become damaged over time, leading to a loss in pressure and an increase in burning oil at the wrong time.

Another reason why you might have low engine oil symptoms is that you are using the wrong kind of motor oil. Make sure you check with your mechanic or the manual to see the right type of viscosity of oil that needs to be used in your specific car. Low viscosity fluids produce less resistance and can reduce oil pressure.

One reason why you might have low engine oil pressure is the clog in the pickup pipe that connects the oil pan to the engine. This dirt and contamination can cause a lack of lubrication and an increase in heat. Dirt and contamination are definitely the cause if you have carried out the proper oil changes at the right schedule, and use the correct viscosity.

The oil pump is in charge of getting the lubricant from the oil pan and filtering it through a strainer before it gets to the engine. Over time, the dirt, contaminants, and debris can accumulate in this engine system, leading to low engine oil symptoms.

The low engine oil pressure can also drop due to the pump damage. If the pump is not working as it should, the oil pump must move the motor lubricant through the engine system. If the engine oil pump stops working, then the oil will not move around the system at the right capacity.

When the oil pump is not working well, the pressure within the tubes and the engine will drop. This decline in engine oil pressure can lead to low engine oil symptoms. The low pressure can be due to the incorrect installation of the oil pump, poor maintenance of the pump, and oil contamination and debris within the pump.

Some common causes of the internal oil leaks and the low engine oil symptoms are broken piston rings and damaged valve seals. If the excess space in the valve guides is present, this can reduce the oil pressure.

How To Fix Low Oil Pressure

To fix this pressure issue, one fix is to use a higher viscosity oil. The change in the oil viscosity can compensate for the higher bearing clearance and increase the pressure.

A broken part can lead to low engine oil symptoms that are detrimental to your vehicle. A broken oil pump or broken oil pump drive belt can be harder to identify than other problems, so this might require some disassembly from the mechanic.