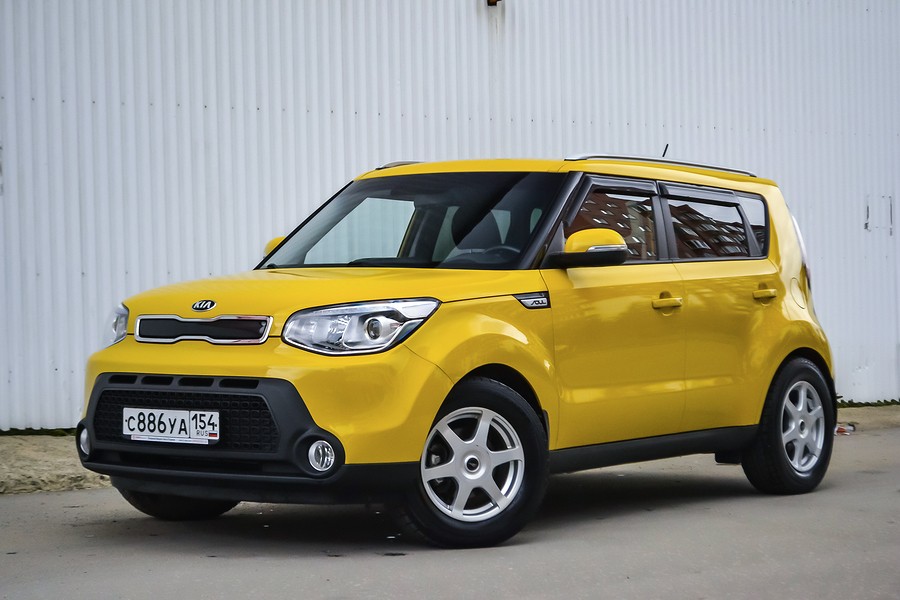 The Kia Soul is a crossover SUV that is marketed and created by Kia Motors, a South Korean car company that originates from Seoul. Hence the name, Soul – right? The Soul was designed at the company’s center in California, and debuted in the 2008 Paris Motor Show. Since 2014, Kia has created other Soul models that have been sold in both North America and Europe.

Despite Kia Motors being the second-biggest car corporation in South Korea, there are still ample problems that have arisen with the Kia Soul. After some complaints of a plastic-feeling interior and a tough ride during the first year, Kia updated and upgraded those aspects in the first generation of the car which debuted in 2009. The 2009 model was only sold in Asia, while the 2010 was the first model to debut in other locations.

Once the Kia Soul was marketed and sold to locations worldwide, numerous people and technicians began to realize the problems attributed to the Soul. The 2014 Kia Soul had the most overall complaints, but the 2015 Kia Soul had the worst rating due to the factors of high repair cost and increased problems at a lower mileage amount. The worst problem category for the Kia Soul is the engine problems.

Kia Soul Problems Through The Years

Unfortunately for Kia, the problems with the Kia Soul have been around since its inception. Here are the most common problems for each year of the Kia Soul.

The 2010 Kia Soul was the first generation, which featured two bucket seats, flat-folding bench seat, six-speaker stereo, and additional features that could be added for an upgrade, like steering-wheel audio and Bluetooth. Despite some technological advancements in this model, there were numerous problems attributed to the first year. The Main issues dealt with engine problems, electrical issues, and concerns about the brakes.

The Kia Soul engine problems were characterized by the check engine light being on, engine failure, vehicle speed control issues, and the engine losing power. The cylinder gasket failure can cause a complete engine failure. There are reports of warning signs illuminating while driving at low speeds, the transmission being unable to shift gears, and the melting of the connector, causing the engine to cool.

The check engine light being on in the Kia Soul is a problem which could be due to either the code issued, the gas tank, or issues with the oxygen sensor in the tank. The problem with this is that the solution is hard to come by, since there are reports of this issue not being pro;perly diagnosed and controlled in time to save the car’s engine.

The electrical problems in the 2010 Kia Soul is frequented by reports of a popping sound while the radio is playing, the speakers going in and out when the car hits a bump in the road, the electrical harness failing prematurely, and the high beam lights turning on automatically. The average mileage that these problems occurred was at 60,000 miles, and caused at least 5 fires in passengers’ cars, creating a very unsafe and dangerous situation for 2015 Kia Soul owners.

The concerns about the brakes on the Kia Soul comes from users stating the brakes make a grinding noise while using, the gear shifting without meaning to, unintended acceleration while driving, and wheels locking while driving. These occurrences have resulted in two crashes, two fires, and three injuries for 2010 Kia Soul owners, and typically happen at around 80,000 miles.

The main issues with the 2011 Kia Soul are even more pronounced and higher than the previous year’s model, with more complaints about the electrical system, brake problems, seat belts and air bag problems, and engine issues. Dealing with issues in four categories when referencing the 2011 Kia Soul shows that Kia didn’t address or fix any of the issues from the 2010 Kia Soul, and the problems still remain.

The main problems with the Kia Soul’s electric system in the 2011 model is reports of the horn not working, driver side door having issues with opening after being unlocked, battery light coming on due to a faulty alternator, and horn malfunctioning repeatedly. The horn isn’t a super-intense issue that would need to be immediately fixed, but it can help other drivers’ awareness on the road and alert anyone if you’re coming – especially if other components in your car aren’t working properly, i.e. brakes.

The issues with the Soul’s brakes mainly has to do with the electronic stability control. There are numerous reports of the ECS coming on at various times while driving or while idling at a stoplight or stop sign. Pushing the ECS switch doesn’t affect the light at all, and doesn’t turn it off/on. The problem with this is that the light problem occured when the recall was issued for the brake switch in this car, meaning it has hard to find a solution. This problem tended to arise at around 18,000 miles in the 2011 Kia Soul.

The problems with the seat belts and airbags in the 2011 Kia Soul are mainly related to the airbags not deploying when needed. This is a serious safety issue which would need immediate repair or recalling your Kia to the shop. There are numerous reports of the air bags not inflating or deploying during a collision. This has caused at least 19 crashes, twenty-two injuries, one death, and typically occurs at around an average of 50,000 miles. The seat-belt issues deal with the shoulder harness fitting improperly, causing the strap to cross over the passenger’s neck, which can cause harm and not work properly to put pressure in the right spot. This has occurred in at least four crashes, caused six injuries, and happens at around 28,000 miles.

The engine issues in the 2011 Kia Soul mainly are characterized by the engine cooling malfunctioning, the vehicle speed control not working correctly, and the engine making the car unable to accelerate and the head gaskets failing. This typically requires a replacement of the engine, which can cost oer $1,400.

The 2012 Kia Soul, unfortunately, did not get any better for Kia, but got substantially worse. There were numerous reports of issues with the steering, accompanied by 94 NHTSA complaints. The second highest category was the engine issues, which also had 82 complaints from the NHTSA.

The steering problems in the 2012 Kia Soul were mainly due to a clunking sound while turning, a bad steering coupler, and the steering locking while using. There were many reports of the Soul making a clicking or popping noise while turning the steering wheel either direction. This has typically been due to the steering coupler, and there is a recall on this coupler in the other Kia models. This problem has caused at least three reported crashes, six injuries, two deaths, and commonly happens at just below 55,000 miles. The severity rating of this problem is extremely high, at the maximum of 10.

The engine problems in the 2012 model were typically characterized by the car starting to smoke, the check engine light flashing, the car losing power, and an inability to accelerate. The problems range from a catalytic converter failure (which has had to be recalled), engine failure, and abnormal engine combustion. This usually results in the engine needing to be replaced. An engine can cost $4,000-$5,000 to replace a 4-cylinder engine.

The 2013 Kia Soul continued with the trend of steering and engine problems, with engine problems being the most dominant and steering coming in a close second. The engine problems featured a ticking noise while using, engine failure, and a rough-feeling while idling.

The engine problems typically dealt with engine failure, which requires the engine to be replaced in the Kia models. The tapping sound would progressively get worse, until the engine eventually died, since there was no specific code for the engine repair. The complete failure would typically happen at around 80,000 miles, and had a severity rating of 10.

The steering issues led to numerous reports from owners saying there was a clunking noise while driving, developing too much play and give in the steering, and a clicking noise while the vehicle is not moving. This problem caused at least one crash and one injury, and occurred at around 53,000 miles. This problem had a severity rating of 10, since not being able to direct your car is a huge Kia Soul problem which has to be fixed in order to drive safely.

The two main categories in the 2014 Kia Soul which had problems are the engine and lights sections. The steering issues lessened, which is good for safety ratings, but the engine issues have progressed, with a total of 186 NHTSA complaints.

The engine problems are categorized by the drivers burning oil and not being able to drive without leaking oil everywhere, usually resulting in an engine replacement due to engine failure. If you don’t fix your problem of your car burning oil, this can cause expensive repairs, usually leading to engine failure and replacement. This typically happens at around 86,000 miles and has a severity rating of 10.

The issues with the lights in the 2014 Soul is mainly about the vehicle headlights flickering in and out, and the beam lights burning out. This usually happens at just below 60,000 miles, and can be fixed without permanent damage to your car. The severity rating of this issue is only 2.5, since it can easily be remedied and is a minor issue.

The 2015 Kia Soul was the worst-rated year out of the 2010-2018 models, due to the early onset of all of the problems, and the high amount of engine-related complaints – NHTSA issued 144 complaints in the engine category.

The abnormally high amount of reports of engine failure make this an unsuitable model to buy for any reason. The possibilities of the engine to fail and stop working at any point make this car unsafe to drive. The replacement cost of a 2015 Kia Soul engine is very expensive, coming in at over $5,000 for the labor and parts. Overall, the 2015 Kia Soul is the worst model to purchase out of all of the years.

The 2016 Kia Soul doesn’t have the best ratings in terms of safeness of cars, but the dangerous side effects slightly diminished since the previous year. There are still numerous concerns about the engine, with 72 complaints by the NHTSA, accompanied by complaints about the electrical system within the car.

The 2017 Kia Soul saw a drastic reduction in the amount of complaints and user reports of engine failure when compared to the previous years. The 2017 Kia Soul had relatively few issues, with the two highest being the engine and electrical categories, with much lower percentage and prevalence from the 2016 model. The 2017 also underwent some changes in the minor body trim, and replaced the old 2.0-liter engine with a newer 1.6-liter engine.

The 2018 Kia Soul saw a lower number of reports than all of the previous years up until this point, with the most NHTSA complaints being in the drivetrain and engine categories. Despite much lower numbers, there were a large number of fires linked to the Kia Soul in the United States.

What If I Don’t Want To Keep My Kia Soul Due To The Safety and Engine Problems?

If you don’t want to spend money on the engine replacement necessary with many of the Kia models, you can choose to turn your car into a reputable company that will provide you with a fair quote. Remove all non-metal components, sell them for some quick cash, and bring your vehicle to CashCarsBuyer to make some money to put aside for a new and safe vehicle.