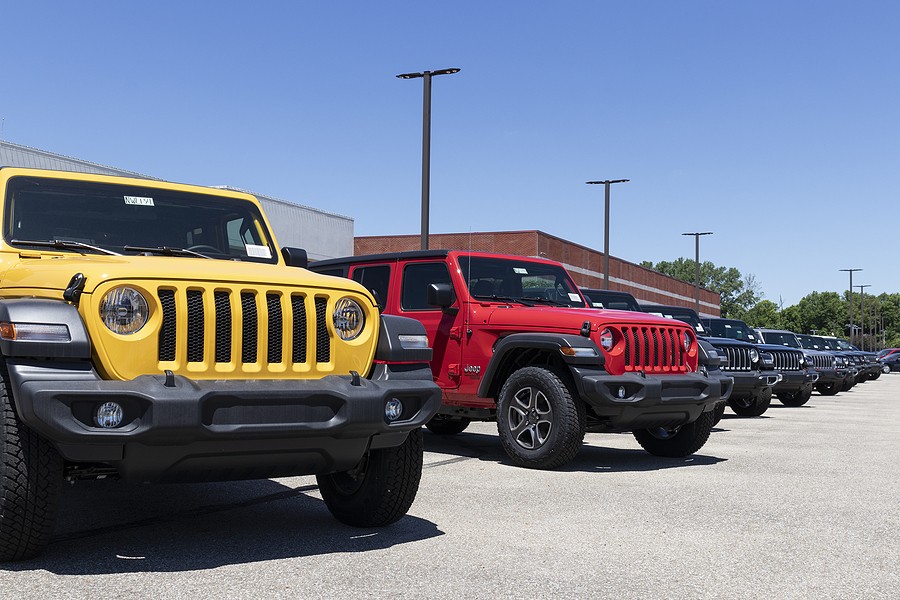 The Chrysler 4.7L V8 PowerTech engine offers drivers an eight-cylinder gasoline engine that arrived back in 1999. The engine was then used as the engine for the Jeep Grand Cherokee. It was then used in the Cherokee for models between 2000-2002. The 4.7 was also the engine in such Dodge vehicles such as the Dakota, Durango and Ram.

The 4.7L V8 was the first of its kind within the PowerTech family and was manufactured as a replacement for the 4.0L inline-six engine. That engine was manufactured by AMC and 316 V8s of Chrysler's LA family.

The 4.7L PowerTech offers a cast-iron cylinder block alongside a 4.09-inch (104 mm) bore spacing, accompanied by a 9.09-inch (231 mm) deck height, with a 90-degree angle. The engine block for this engine was created from scratch with all dimensions being new. Back in 2002, Chrysler introduced a version of the 4.7L PowerTech engine with a “High-Output” version. This version was utilized in various Jeep Grand Cherokee Limited vehicles as well as for standard Overland models. The 4.7L V8 High Output engine also offers a 9.7:1 compression ratio, two knock sensors, brand-new camshafts, high-compression domed pistons, and tuned intake. With an additional 30 horsepower and 35 lb-ft of torque over a standard engine- this high output version was then replaced by a 5.7L V8 Hemi engine. While in 2005, standard version received two knock sensors, there were also some other additional yet minor changes. Back in 2008, the 4.7L PowerTech engine underwent a huge transformation.

During that 2008 model year, the 4.7L V8 PowerTech engine was built with all-new cylinder heads that featured two spark plugs per cylinder. The bottom of the engine was outfitted with a brand-new and lightweight piston and forged steel combination. Additionally, the compression ratio was multiplied from 9.0:1 to 9.8:1.

How Much Horsepower Does A 4.7 Liter V8 Engine Have?

What Specific Problems Does the 4.7 Engine Have?

The 4.7-liter PowerTech V-8 engine has received both good and bad reviews from owners since its debut back in 1999. With most of its quality issues centering around the lack of scheduled maintenance- just this alone is certain to be the death of any engine. Additional problems with the engine have been noted:

Just like any and all automakers, Chrysler LLC, adheres to the policy warranty of anything that is constructed; the 4.7 engine is no exception. While engine failure is reportedly a recurring issue with various Dodge Dakotas and Durango vehicle, this has centered around the lack of maintenance. Even though an owner may show evidence of regularly scheduled maintenance on the vehicle, that owner can still have issues. If there is signals of metal shavings, oil sludge, or even the failure to replace parts at scheduled intervals, all of this and even more- could void the engine’s warranty.

With the 4.7 engine, there could be engine failure that can occur after 70,000 miles, because of poor or lack of maintenance. Additionally, engine failure has also been noted in various 4.7-liter engines with abnormally thin engine block walls. While those thin walls cause excessive heat, as time progresses, the oil can become thick as well a “gummy”. Additionally, the heads will begin to crack.

With the 4.7-liter having more than 70,000 miles on it, there is the danger of cracking a head if the driver decides to drive it when the engine is running more than 200 degrees while driving on flat surfaces. There is also danger with the engine running over 250 degrees while driving over unstable and uneven terrain. A mechanic who performs a diagnostic of the thermostat, radiator, water pump and gauge should be able to locate the problem.

Another issue that seems to be a common issue with the 4.7 engine, is oil sludge. It has been documented that oil builds up, regardless of the weight of the motor oil. Oil sludge is generally due to a faulty positive crankcase ventilation. It can also happen to a faulty PCV, valve. Changing the PCV and utilizing high-mileage oil may prove to be a viable solution for the oil sludge issue.

Yet another with the 4.7 engine is oil foam. This is generally evident on the oil dipstick. It can also be seen inside the oil cap, due to a faulty PCV valve. While a properly working PCV valve vents out excess build op of condensation- the 4.7-liter V-8s seems to be prone to oil foam. Because of this issue, this may require an oil change at every 3,000-miles, instead of every 6,000-miles.

Check out what Jeep owners-who have a 4.7 engine have to say-regarding the issues they have faced!

“I have kept this Jeep in excellent condition. I'm always keep the service up and I keep in garaged. It looks new from the insides and outside, but it's a 2002 Jeep Grand Cherokee Limited, it has low mileage at 74,000 original miles.  Just recently drove it and it worked great. Stop for a quick errand trip to the store. Came back out and try to start it. Misfired and did start and ran rough so, turn the engine off and towed in to the mechanic. Fault error po302. The mechanic changes all the plugs as it was getting fire. Still missed terrible and went to check compression and it was -zero compression- in cylinder. After three tows to different mechanics, the final prognosis after diagnostics, it was not a value train problem, or rocker arm, or lifter, not rings, piston went up and down just fine. It was something else. These mechanics all stated needed a new engine and these were different garages and they don't know each other. They could not explain it, it was cost too much to tear the engine down to see exactly what happened. I guess I could and then repair that one issue. Then other problems could arise. But with micro-camera it was not on the top end of the engine. So, it has to be in the lower end. So, I opted to buy a brand-new engine with all the updates and upgrades and have trusted AAA qualified and referred heavy engine shop R&R it. Engine cost $4200 and then over $2300 labor and supplies to get it running again. Yes, I would like to know what the hell happened. One minute it was running great then the next total non-operational.”

“I am the [third] owner of this Jeep. I bought it as a last resort because I needed transportation. It LOOKS fantastic. It runs like crap. Among all of the problems I have had with it since I purchased it used in April, 2013, the main problem is that it has a rough idle. I didn't get any misfire codes the first time we replaced the engine in 2015. The valve fell into the cylinder and burnt a hole in the cylinder. This is the HIGH OUTPUT engine. This engine has a horrible design flaw. No wonder Jeep only used it for 2 years.”

“I will never own another Jeep. I will never own anything that has the word Jeep on it. we bought it used but we expected it to last longer than the 3 years after we bought it. When I was looking for a car, it was recommended that I get a Jeep because they were such “good and reliable cars”. we have had nothing but problems out of this thing. I hate it. I would never advise someone to buy one. I never took it off road, never went very far in it, never hauled anything with it. Only drove to work and took the kids to dance. I never punished this car in any way. I never even drove it in the snow. Who expects the engine to just go out? Needs a new engine and who has the money to do that? I was told it was a problem with this year model. I was told they tried something new this year. Great!!! Now I'm stuck with a piece of crap lawn ornament. I will never get the money back on what I have put into this thing. This isn’t the only problem we had, there were multiple before this, this was just the major one. NEVER trust a Jeep.

“Chrysler, Dodge and Jeep all have this 4.7 V8 in their cars. They have had a problem with these motors filling up the oil return holes with sludge since 1999. There is no recall that I can find. When the oil gets pumped up to the heads and cannot run back down to the oil pan then the bottom end of the motor gets starved for oil and bang goes the engine.  I bought this car for my grandson for [$4,000] 2 weeks ago. He had problems with it dying at stop signs and not restarting. The check engine light would come on. I had it towed to a local shop and they ran codes on it. It came back with cam, crank and knock sensor codes. They put a new starter in, pulled the oil pressure sending unit and checked the oil pressure with a gauge. It came up to 4 lbs. at idle. They told me that as scary as that sounds that it was with in specs for this engine. There was no mention made of the sludge problem. They reset the codes and drove the car. They said it was good to go since none of the codes came back.  My grandson drove it about 10 miles to a friend's house and on the way back it began knocking. He never made it home. It throws a rod and now needs a re-manufactured engine. Remind me, why did we bail out the auto industry? Why is not some of that bail out money used to take care of making it right for those of us who have been damaged by the auto industry.”

Sick of Those Jeep 4.7 Engine Problems? Sell That Car!

Are you tired of that Jeep with the terrible 4.7 engine? Have you been told that you cannot do anything about the vehicle? You can! And we are here to help!  Sell that Jeep with the 4.7 engine problems to Cash Cars Buyer! We buy all makes and models, for fair market value! You can get a FREE online quote in a matter of minutes by just clicking here!

Junk a Jeep Now! How it Works

Tell us all about your Jeep

Just take a few moments to tell us all about your Jeep. Once you do, you can obtain a FREE online instant offer on it. Once you love what you see, you can call us!

Accept your offer on your Jeep

When you call us, one of our friendly agents will ask you a few questions about your Jeep. This will help us to formulate the best guaranteed cash offer in a matter of minutes. When you accept your offer, we will make plans to come to your home or location, so that we can appraise your Jeep in person and then pay you on the spot!

Get payment in a flash!

When we arrive to inspect your Jeep, we will not only get to work fast, but we will also handle all paperwork as well as processing. When all is well, we will put money in your hands, FAST!

When you sell your Jeep to us, you never have to pay us anything! Our Jeep junk car buying services are completely “FEE-FREE” to you! Forget paying for paperwork, processing or towing! We handle it all!

You deserve an SUV that runs and the only way you can get one, is to sell that jalopy Jeep! So, get your FREE online instant offer here, and then call Cash Cars Buyer! We turn jalopy Jeeps into joyous cash, FAST!