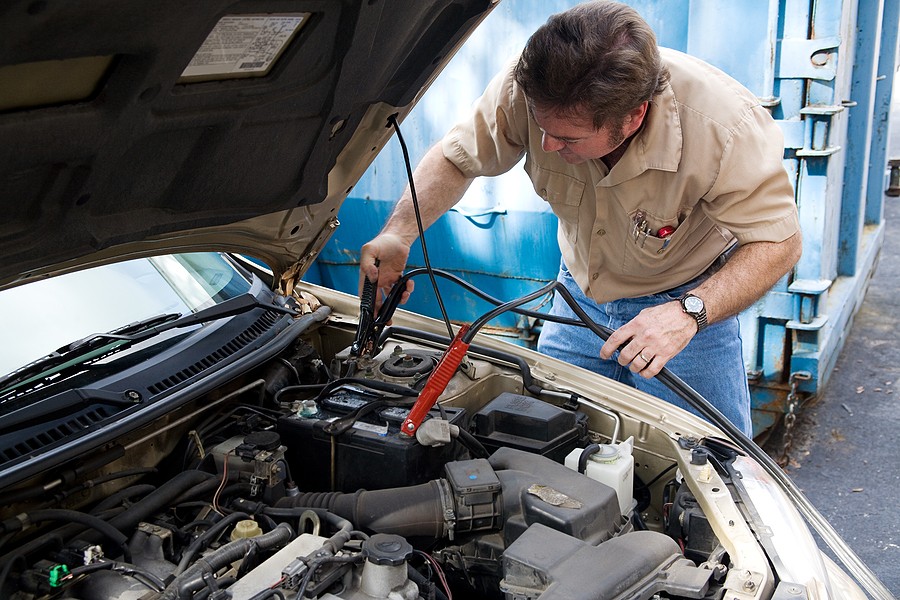 The average car needs two things to keep it running all the time: fuel and a battery. Thanks to the emergence of electric cars, fuel isn’t even necessarily all the time anymore. But a battery definitely is, and when your car battery is completely dead, you could be left stranded.

A typical car battery can last you three to five years. However, there are a number of things that can drain your battery or cause it to perform worse than you would like it to. When that happens, you’re going to need either a jump-start from a portable starter or a friendly Samaritan, or a new battery all together.

Let’s take a look at some signs and symptoms that your car battery is completely dead, what might have caused it in the first place, and finally what you can do to get your car moving again.

What Caused My Car Battery to Die?

If you get into your car in the morning and find that the battery is dead, it’s going to be pretty frustrating. If this is the first time it’s happened, there may be a simple explanation of what’s going on. However, if this is happening regularly, then something more serious is going on.

Leaving your headlights on is the most common thing that you can accidentally leave on to drain your battery. However, it’s possible that some other electronic devices in your car such as a phone plugged in, or some aftermarket sound systems can continue to drain the battery even after you’ve turned the car off.

It’s also a possibility that the terminals in your battery could have a buildup of corrosion. This is usually a flaky white or grey substance around the terminals themselves. Your battery will be unable to transmit the correct amount of power through this corrosion, which can make it impossible to maintain the power needs of your vehicle.

Parasitic power drains come from electronic components that were supposed to turn off but didn’t for some reason. Things like your interior lights, which come on when you open a door. If the door doesn’t close properly, the lights may stay on and drain the battery.

If you only drive your car for extremely short trips, you could be limiting your alternator’s ability to keep your battery charged. This will get worse as your battery gets older.

If you live in a cold enough climate, you probably noticed that your car struggles a bit to get started on very cold days. This is the reason why, because your battery is having difficulty in the low temperatures. If it gets cold enough, and your battery is already a little older, you may not be able to start it all until it warms up.

If your alternator dies, then it becomes the sole job of your battery to maintain the electrical systems in your vehicle. A car battery only has the ability to run a car on its own without the aid of an alternator for about a half hour at the most, but probably closer to 10 minutes.

A properly charged car battery will have about 12.6 volts registering on a multimeter if you check it. 12.4 volts to 12.5 volts is perfectly feasible to keep your car running. When it drops down to 12.3 it’s going to be dangerously close to not being able to maintain your power needs.

A 75% charge in your battery will read as 12.4 volts. If your car battery drops down to 12 volts, it means you only have a 25% charge left. At 11.9 volts, your battery is completely discharged.

Signs and Symptoms of a Bad Battery

If your battery didn’t die because you accidentally drained it overnight, there are typically some signs you can be on the lookout for to let you know you have a problem. Any of these should give you some time to repair by charging your battery or replacing it with a new one.

Before your alternator has a chance to take over, your battery is running the electronics in your car. So, when you first try to start your vehicle, the headlights are running on battery power alone. If they get brighter when the engine is going that means the alternator has taken over and is providing adequate power for them.

Most cases of battery corrosion aren’t too bad, but sometimes it can get extremely out of hand and the corrosive substance can spread across the top of the battery. If it gets bad enough, then you simply can’t draw any power at all for the battery.

Luckily, cleaning corrosion off a battery is fairly easy and all you really need to do is remove the negative terminal first followed by the positive terminal, then use a stiff brush and a paste made from baking soda and water to scrub away all the corrosion until they look good again.

If your car needs to have the battery replaced is going to set you back somewhere between $50 and $200 depending on the type of battery you buy and whether you need a mechanic to install it for you.

Like we’ve said, a new battery is not something you should need unless your old battery has been around for about three to five years already. If it dies earlier than that or you find that your battery needs more frequent jump-starts even though it’s still pretty new, you may need to look elsewhere for problems.

It’s possible you have some kind of parasitic draw on your battery, or your alternator is failing, and your battery is struggling to make up the difference for it.