Infiniti G35 Problems – Watch Out For The Electrical Problems! 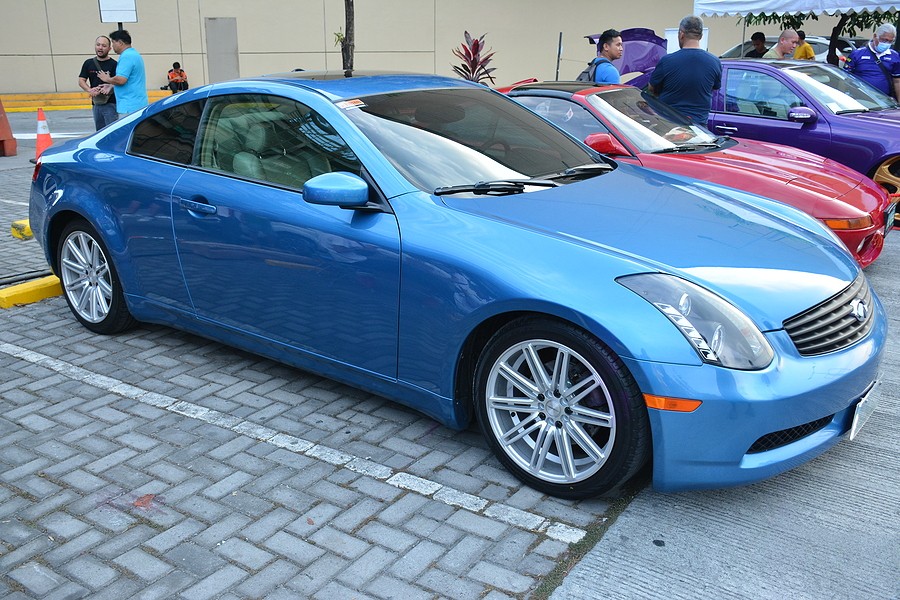 The third generation of the Infiniti rebranded the entire line to include the V35, while the fourth generation rebranded to the V36, featuring a hardtop coupe convertible. Although the early generations had some Infiniti G35 problems, the later models worked to fix the issues mentioned earlier.

The third generation of the Infiniti G35 was unveiled in 2001 and continued the same construction and materials as the Infiniti M and J30. The G35 was based on the Nissan FM platform and a base shared with the Nissan 350Z and the Infiniti FX crossover. The FM platform evenly distributes weight and earned favorable rankings from car review companies and the public alike.

The Infiniti G35 uses a front-midship engine, rear-wheel-drive layout, and contains either a 5-speed automatic engine or a 6-speed manual transmission engine. If you are looking to purchase the automatic, it is only available for the all-wheel-drive sedan option of the Infiniti G35.

The all-wheel-drive model of the Infiniti G35 is the G35x, with the car using 100% rear-wheel drive at a steady speed and sending nearly half of the vehicle’s torque to the front wheels during use.

The Infiniti G35 was also home to the VQ35DE engine, a V6 piston engine that displays between 2.0-liters and 4.0-liters and fitted with a multi-point fuel injection system. The Infiniti G35 also uses a front-midship engine drive layout to create efficient power transfer.

The top concern regarding the interior accessories focuses on the interior electrical controls not working anymore in the vehicle. The most common solution for this issue is to replace or repair your car radio at an average of around 85,000 miles and for a price of nearly $200 for the repair cost.

Owners state that the radio malfunctions and the car does not have climate control, with the driver not having any method to control the vehicle’s temperature or fan speed.

The second concern regarding the Infiniti G35 problems in the interior accessories category is the CD player not working. The average mileage of occurrence is around 39,000 miles, with owners stating that the CD player cannot read any CDs and there is no heat, no air, no gas tank reading, and no radio in the car.

The third and final concern regarding the Infiniti G35 problems in the interior accessories category is the doors not locking when they should. The most common solution is to replace the door lock actuator at around 87,000 miles.

The engine control unit’s parts, the actuators, and the internal combustion engine are crucial to the functioning of the powertrain control module. The actuators are components of a machine that are responsible for the moving of the mechanics within the system.

The internal combustion engine uses fuel combustion within a combustion chamber to aid in the fluid fit. The expansion of high-temperature and high-pressure gasses fuel the vehicle and aid in the working powertrain control module.

Electrical Problems in the Infiniti G35

Another concern focused on the Infiniti G35 problems over the years is the electoral system in this vehicle.

The electrical system’s top concern is the steering wheel controls not working any longer in the vehicle. The most common solution is to replace the clockspring or replace the spiral cable at around 121,500 miles and costing the driver nearly $120 to complete the replacement.

Owners state this issue has a 6 out of 10 on the severity scale, and they report that the steering wheel controls no longer work and cruise control does not function in the car.

Cause of Malfunctioning Controls

Once a tie rod is loose, damaged, or worn down, the steering wheel will make loud and noticeable creaking sounds that can be audible to the driver and the passengers. If you notice damaged tie rod ends, this can cause the steering wheel controls to malfunction.

Another issue regarding the electrical problems and the steering system in the Infiniti G35 problems category involves the cruise control malfunctioning. The most common solution is to replace the steering wheel’s clock spring for around $60 and occur at nearly 99,000 miles on average.

Engine Problems in the Infiniti G35

The third category of concern in the Infiniti G35 problems is the engine category causing issues for this type of vehicle.

The engine category’s top complaint about the Infiniti G35 problems is excessive oil consumption in the vehicle. The most common solution for this problem is to get a new motor at around 72,500 miles.

When excessive oil consumption occurs in your Infiniti G35, this can cause low engine oil symptoms that can wreak havoc on your engine and transmission system in your car.

Oil warning Light – Possibly the most noticeable low engine oil symptom that most drivers and passengers notice is the oil warning light flashing on their dashboard, indicating a problem you need to take care of immediately. The flashing light suggests that you have low engine oil since there is not enough oil in your engine to run the car and power the vehicle to drive on the road.

Knocking – Another noticeable sign of low engine oil symptoms is knocking noises and loud sounds from your engine. Since these sounds will be very noticeable to everyone in the cabin, this is a symptom that is easy to recognize before the problem gets any worse. You will only see this low engine oil symptom if there is no correct oil level in your car, so you need to get it fixed right away.

Burning Smell – Your engine has many components and parts that work together to run the car smoothly and efficiently. Most of these internal parts and mechanisms are made of metal, and they frequently come in contact with other metals, leading to increased friction and overheating. The oil is a lubricant that prevents heat from getting too high within the engine. If the oil is too low and causes the onset of low engine oil symptoms, you will see that the engine is not cooling off during use.

Wrong Oil Viscosity – You might have low engine oil symptoms because you are using the wrong kind of motor oil. Make sure you read your vehicle’s manual or bring your car to a local mechanic to determine the right type of oil viscosity that needs to be used in your specific car. Low viscosity fluids produce less resistance and reduce oil pressure, keeping your engine healthy and running at a high-performing level.

Faulty Oil Pump – Low engine oil pressure can also drop due to fuel pump damage. If the fuel pump is not working correctly, the oil pump must move the motor lubricant through the engine system. If the engine oil pump becomes damaged, the oil will not move around the system at the right capacity and speed, leading to low engine oil symptoms.

Internal Oil Leak – A leak within the tubes and the engine system can lead to low engine oil symptoms. Instead of the oil moving through these tubes at the right capacity and speed, the oil will leak through the engine’s cracks or holes, causing a drop in pressure and fluid levels.

The second and final issue when it comes to engine concerns in the Infiniti G35 problems is the timing chain breaking and is not durable enough to withstand constant use. The most common solution is to replace the engine for nearly $5,000 at around 123,000 miles, with owners stating that the timing chain breaks very low mileage and requires a costly fix.

The reliability of the Infiniti G35 earned a 4.5 out of 5 stars in terms of JD Power rankings, with the car only having one safety recall from the NHTSA. The recall for the Infiniti G35 focused on the electrical system’s software. The passenger vehicles that had the occupant classification system control units possibly being manufactured incorrectly, leading to a faulty airbag control unit.

The airbag control unit issues caused some of the more severe Infiniti G35 problems, with the airbag issues resulting in the airbag being suppressed and not providing enough protection in the event of a crash.

According to Cars.com, the Infiniti G35 earned a favorable 4.7 out of 5 stars from 84 reviews and car owners who have owned, or currently own, this vehicle. Despite the listed Infiniti G35 problems and concerns that owners may have, 95% of drivers recommend buying this car. The car in question was the 2005 model of the Infiniti G35, which was later than the 2003 and 2004 models that caused the highest number of necessary repairs and replacements.

Noticing the most common and most severe Infiniti G35 problems can help you determine if this car is right for you. Taking note of the interior accessories concerns, engine issues, and electrical issues in this vehicle can help you prevent any of these problems from getting worse over time.

Be especially aware of any steering wheel and cruise control concerns, excessive oil consumption, timing chain durability issues, and the audio not playing sound in your vehicle as clues to some of the more severe Infiniti G35 problems.