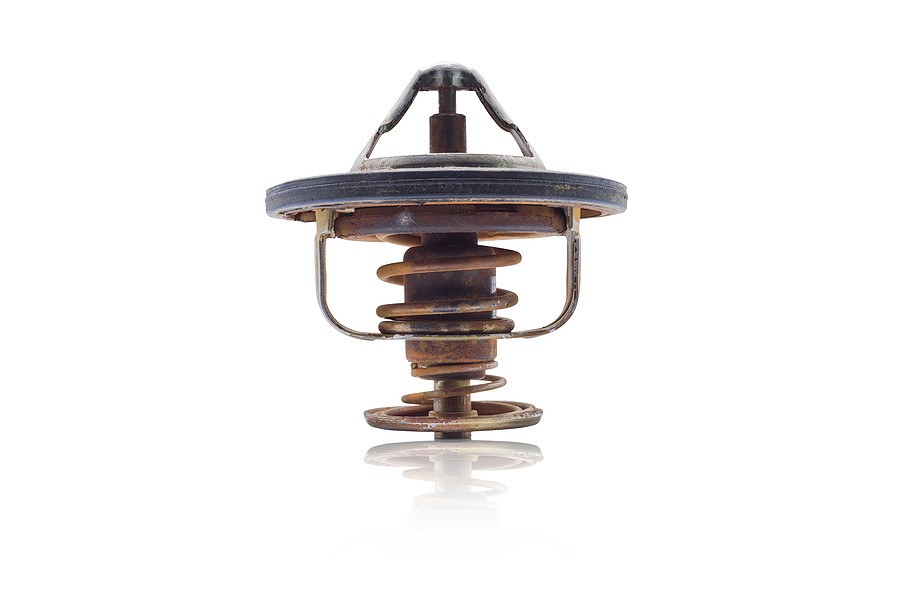 As you probably know, your car’s engine tends to get very hot when it’s running for longer than just a few minutes. Once your engine warms up, its temperature skyrockets, and it’s important for it not to get too hot. There is a thermostat located underneath your car that is designed to take your car’s temperature and to prevent it from overheating. It’s very important for this part to be working properly at all times, which is why you need to keep a close eye on it. You also need to know the answer to the question, “How much is a thermostat for a car?”, just in case you ever need to replace it. Find out more about how a car’s thermostat works before learning how much it’ll cost to replace it below.

What Does the Thermostat in a Car Do?

It’s hard to explain what some of the different parts in your car do. But it’s not hard at all to talk about the role your car’s thermostat plays. The thermostat is a valve that is strategically positioned in your cooling system, and it keeps tabs on your car’s temperature and releases coolant accordingly when it gets to be too warm. As long as your thermostat is doing its job and you have enough coolant in your car, you shouldn’t ever have to worry about your engine overheating. Your car will continue to push coolant from your radiator to your engine and then back again to keep everything at the right temperature.

What Can Go Wrong With a Car’s Thermostat?

In a perfect world, your car’s thermostat would work properly at all times and would keep the coolant flowing through your system so that your car doesn’t ever overheat. But of course, this isn’t always going to be the case. Over time, your thermostat can start to malfunction, and when it does, it’ll make life difficult on you and your car by occasionally causing it to overheat.

There are two main things that can go wrong with your car’s thermostat. It can either get stuck in the open position for an extended period of time or stay closed and refuse to open back up again. In both cases, it’ll have a negative impact on your car. If the thermostat stays open, your engine is going to get too cold and drag down your car’s performance. If it stays closed, it’s going to lead to your engine overheating on you. Either way, you’re going to be forced to tackle potentially expensive auto repairs if you don’t pick up on the problem with your thermostat quickly and do something about it.

How Long Does a Car’s Thermostat Last?

Now that you know some of the things that could go wrong with your thermostat, you should know just how important it is for you to have it replaced every so often. But how long should you wait in between thermostat replacements? That is a tricky question since it tends to vary from one vehicle to the next.

The thermostat in your car isn’t going to wear down on you like a lot of the other parts in your car. There isn’t always a set amount of miles that you’re going to be able to go before asking, “How much is a thermostat for a car?” But generally speaking, most mechanics will tell you that it’s smart to have a thermostat replaced anytime that you have your car’s cooling system serviced. It’ll make your cooling system way more efficient than it would be otherwise and ensure your car’s thermostat doesn’t cause problems in the near future.

Other than that, your best bet when it comes to figuring out when to replace your car’s thermostat is going to be to look out for the signs that will suggest it could be on its way out. It’ll be at those moments when you’ll want to wonder, “How much is a thermostat for a car?”, and seriously consider having it replaced.

What Are the Symptoms of a Bad Thermostat in a Car?

So, what are some of the signs that you should keep a lookout for as far as a bad thermostat is concerned? That’s a great question, because as we just touched on, it’s going to be important for you to be proactive with your thermostat. It’s not uncommon at all for a thermostat to give out without warning and take a serious toll on your car if you’re not careful.

If your car’s thermostat is stuck in an open position, these are going to be some of the signs that will show you that you need to do something about it:

Meanwhile, if your car’s thermostat is stuck in a closed position, these are going to be some of the signs that will show you that you need to do something about it:

Bottom line: It’s almost impossible to miss the signs associated with a bad thermostat in a car. You would almost have to go out of your way to ignore them completely. You should start asking, “How much is a thermostat for a car?”, right away when you spot any of them.

Can You Drive a Car With a Bad Thermostat?

There are quite a few car problems that you can continue to drive around with without running into any major issues. If, for example, you have a squeaky belt or a minor alignment issue, you don’t necessarily need to pull off the road immediately to address those kinds of problems. But you will, without a shadow of a doubt, have to stop driving your car—pretty much right away—if you have a thermostat that goes bad.

You might be able to get away with driving in a car with a thermostat that is stuck open. In the event that that happens, the worst things you’ll have to deal with are poor gas mileage and a heater that doesn’t work well. But if your thermostat is stuck in a closed position, it’s not going to be long at all before your engine begins to overheat. And once that occurs, there is a chance that your entire car could go up in flames in minutes if you don’t pull over and turn it off.

You shouldn’t worry about asking yourself, “How much is a thermostat for a car?”, if your thermostat is stuck closed. Instead, you should worry about pulling over and turning your car off before disaster strikes.

What Should You Do to Fix a Bad Thermostat?

As soon as you realize that you have a bad thermostat in your car, you should take it off the road, put it into park, and shut it off. That might mean leaving it on the side of a highway or in a parking lot with no one else around. Whatever you do, don’t continue to drive your car with a bad thermostat.

From there, you should get in touch with your mechanic and then have your car towed to their shop so that it can be serviced. They can answer the question, “How much is a thermostat for a car?”, for you and handle putting a new thermostat into place for you. They can also check out other elements of your cooling system to make sure there isn’t a more serious issue going on.

Although you might be tempted to try and replace the thermostat in your car on your own, that’s not going to be the best idea in the world. Replacing a thermostat can be a complicated job for someone who doesn’t have any experience. It could also cause further problems if you don’t install the thermostat correctly. It’s best to leave the job up to a professional.

How Much Is a Thermostat for a Car?

In the grand scheme of things, that makes installing a new thermostat in your car one of the least expensive auto repair jobs around. When you think about what an important role that it plays in your vehicle, you’ll be thrilled to pay such a small amount of money to ensure that it’s working and doing its job.

How Long Does It Take to Change a Thermostat in a Car?

Another great thing about having the thermostat in your car replaced by an experienced mechanic is that you’re not going to have to hand over the keys to your car for hours or even days at a time. Replacing the thermostat in a car is one of the simplest jobs around for a mechanic. Oftentimes, they’ll be able to get the job done in under half an hour as long as everything goes according to play.

We should point out that some vehicles have more complicated designs than others. If your car’s thermostat happens to be in a spot that’s difficult for a mechanic to get to, it could take several hours for them to replace it. It could also drive up the price of thermostat replacement and give you a much different answer to the question, “How much is a thermostat for a car?”

But in most cases, you can get your car’s thermostat replaced and have your car back out on the road within just an hour. It’s yet another reason why you shouldn’t even think to put this kind of job off for any longer than you have to.

Is It Worth Paying the Price to Replace a Thermostat in a Car?

If you have an older car, you should ask more than just, “How much is a thermostat for a car?”, prior to taking on the task of replacing a thermostat. You should also ask if it’s worth it. It’s a question you should ask yourself before making any repairs to an older car. You don’t want to spend a bunch of money on a car that’s going to break down on you in other ways in the months to come.

In the case of thermostat replacement, the answer to, “Is it worth it?”, is almost always a resounding “yes!” Even if your car is on its last legs, paying a couple hundred dollars to replace the thermostat is typically a good idea. It’ll extend the life of your car without putting it into harm’s way.

The only time you should put off having a new thermostat installed in your vehicle is if you know you’re going to be selling it within just a month or two. You would be better off selling it sooner and collecting cash for it as opposed to pouring any more money into it.

Can You Sell a Car If It Has a Bad Thermostat?

If you decide that you’re not going to pay to have a new thermostat installed in your vehicle in place of your old one, you might wonder whether or not selling it will even be an option. Who is going to want to purchase a car with a bad thermostat in it? Won’t they wonder, “How much is a thermostat for a car?”, and then put off paying you a single cent for your damaged goods?

Some might. But the best junk car buyers in the business will happily overlook your bad thermostat and take your vehicle off your hands. They’ll give you top dollar in exchange for your car and help you steer clear of having to replace the thermostat in it. Cash Cars Buyers is an example of a company that will pay you cash for your old car even though your thermostat has gone bad.

Want to get an offer from us for your vehicle? Contact us now to see what it could be worth even in its present condition.