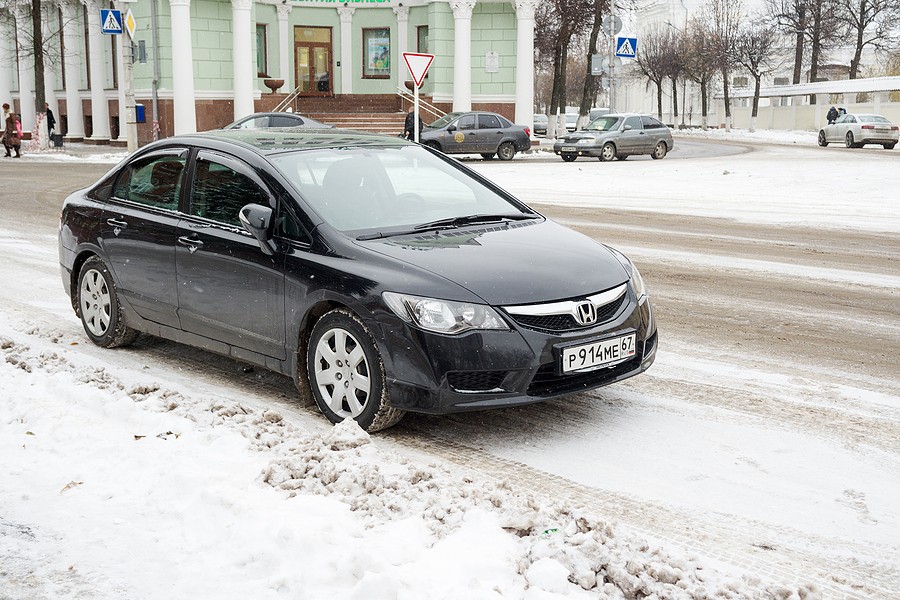 The Honda Civic Hybrid is a hybrid electric powertrain version of the Honda Civic. It has the Integrated Motor Assist technology that is powered by Honda Civic hybrid battery. The Civic Hybrid was released in Japan in December 2001. Due to dwindling sales, lower gas prices, and the debut of the 10th generation Civic line in 2016, it was discontinued after the 2015 model year.

The Honda Civic Hybrid was the first hybrid vehicle to be approved as an Advanced Technology Partial Zero-Emissions Vehicle (AT-PZEV) by the California Air Resources Board (CARB) in the United States.The Civic Hybrid features a hybrid technology comparable to the Honda Insight's Integrated Motor Assist.

The Honda Civic Hybrid was a highly recommended hybrid vehicle for many years from 2000-2009 until the batteries in some of the newer models started dying prematurely. Specifically, the 2009 and 2010 models were handicapped by an infamous short Honda Civic hybrid battery life.

A hybrid battery typically lasts six to ten years, and by law, the batteries are covered by an eight-year/100,000-mile warranty. Unfortunately, many drivers experienced battery failure after only three or four years.

Consumer Reports discovered a significant rate of battery failure in 2009-2010 models in February 2014, with over 30% of respondents stating that they had needed a battery replacement in the previous 12 months, and that majority were likely replaced under warranty.

Honda acknowledged issues with the 2006-2008 vehicles that could lead to battery deterioration and failure. In response to the problem, Honda released software upgrades to extend the Honda Civic hybrid battery life.

Honda's high-tech batteries for these hybrids have been losing their ability to hold a charge years before the warranty expires, but Honda's strategy is to wait until the batteries are fully dead before replacing them. So instead of replacing the old batteries, Honda, as mentioned, began deploying software updates that were supposed to extend the battery's life and “enhance performance,” but environmentally concerned boards had started to express their concern.

Because the software protects the battery by limiting its role in running the 20-horsepower electric motor while increasing the role of the Civic hybrid's 93-horsepower, four-cylinder gasoline engine, the California Air Resources Board is concerned about the potential emissions these updated Civic hybrids may emit.

Environmentally conscious boards aren't the only ones experiencing difficulties with software updates. The National Highway Traffic Safety Administration is currently monitoring and discussing complaints from Honda Civic 2007 hybrid drivers, emphasizing that hazards such as unexpected loss of power are safety concerns with this vehicle's battery.

Almost a third of complaints about the 2007 Civic hybrid revolve around Honda Civic hybrid battery issues, with potential concerns including loss of power while passing someone or on a motorway onramp.

Honda issued a warning letter to nearly 100,000 Honda Civic hybrid customers in 2006, 2007 and 2008, informing them that their car batteries “may deteriorate and finally fail” far sooner than originally projected, and advising them to consider a software upgrade.

A Honda official, Chris Martin, stated that it was clearly not a financial decision as it does not only  help to extend the battery's life, but it also helps to increase performance. Some Honda Civic hybrid owners agree with Martin's viewpoint, claiming that software updates have improved their vehicle's mileage and acceleration.

Martin remained tight-lipped on Honda's meetings with regulators, the nationwide failure rates for these batteries, and the expense of replacing them under warranty. He did say that these batteries cost $2,100 at retail, not including delivery and installation.

Because individual batteries cannot be monitored or charged, the 132 NiMH cell pack is unbalanced. At the 12-cell sub-pack level, monitoring is available, but charging is not. The cells become imbalanced after years/miles of use because they charge/discharge at slightly different rates. Strong cells eventually limit the pack's upper capacity, while weak cells limit the pack's lower capacity, diminishing the pack's useful capacity. Honda increased the IMA battery warranty on all 2009-2011 Civic Hybrids to ten years and 150,000 miles in 2015.

According to the Los Angeles Times, over 4% of hybrid batteries in California Civics have had to be replaced due to different causes, a statistic that many officials believe is far too high to be acceptable.

Honda was quick to respond to the Honda Civic hybrid battery problems. In addition to the software update, Honda issued a Technical Service Bulletin in 2012 that extended the warranty on the Honda Civic hybrid IMA battery to 11 years or 137,000 miles. Customers who had already replaced their batteries on their own were given an additional three-year or 36,000-mile limited warranty.

While many faithful Honda customers were disappointed by the shorter Honda Civic hybrid battery life, extensive warranty coverage helped many owners cover the costs. In addition, the cost of new hybrid batteries has decreased in recent years, and hybrid drivers should have a strategy in place to replace their battery at some point.

Because you rely on your hybrid battery to give you a more fuel-efficient ride, there are a few things to consider when determining whether it's time to replace it. In general, how often and how far you drive, as well as whether you travel in the suburbs, around the city, or frequently drive on the open road, will all play a role in how long a hybrid battery will last.

The temperature in which you drive your vehicle on a regular basis, as well as the mileage you put on it, will all play a role. Finally, as new hybrid and electric technology advances each year, the age or year of your vehicle will determine how long your hybrid car battery will last.

Undercharging has been the major cause of premature battery failure in Honda Civic hybrid IMA batteries. The problem, according to Honda, is caused by “frequent stop-and-go city driving with the A/C on, especially during hot weather.” The hybrid battery may become discharged as a result of this type of driving. This can lead to battery degeneration and failure over time.

The hybrid battery must be kept at 50 to 60% of its full charge for best service life. This requires frequent driving in order to keep the battery charged (at least once every month). If the car is left unattended for more than a month (especially in hot weather), the battery may deplete to the point where it never fully recovers and eventually fails.

A battery that has been totally discharged and not recharged within 90 days may not accept a normal charge and fail prematurely. The battery might potentially be harmed by extreme heat. Curing paint in a bake oven that reaches 150 degrees F may damage a car's battery if it has been damaged and repainted. When working on a Honda Civic Hybrid, body shops are advised not to allow the oven temperature to become too high.

If your Honda Civic Hybrid battery fails, it can be VERY costly to replace, especially if it is out of warranty. According to reports, Honda dealers are asking anything from $3000 to $4000 to repair these batteries. The price of the battery is determined on the type of battery you purchase.

Batteries that have been refurbished aftermarket are also available from a variety of sources. Depending on the source, most of these batteries are currently retailing for $1700 to $2200. (plus other fees).

Because the Honda Civic Hybrid has its own starter, it does not require the hybrid battery to start. However, contrary to popular belief, you cannot just ignore a dead battery. Because dead batteries still try to receive a charge, the motor generator will be constantly trying to charge the battery, consuming more gasoline than if the battery hadn't been there in the first place.

It recharges the battery while coasting and braking. The extra horsepower is roughly 13, but at low gas engine RPMs, it might be nearly twice what gas alone could deliver. At the very least, you should have the battery disconnected when it dies.

If you remove it fully, you'll save some weight, but I'm not sure how heavy this battery is or if it's worth the labor, so at the very least disconnect it. The terminals must be insulated and protected when the battery is disconnected, otherwise they will short out, causing further issues. It's not as simple as unplugging the cords.

The IMA, or Integrated Motor Assist, is a secondary combustion engine. There are three sorts of hybrid cars, according to Honda. The hybrid battery delivers some or all of the power required in each case. If you're wondering if it's safe to drive my hybrid car with the IMA light on, the answer is most likely but there will be risks.

The hybrid battery is most likely in need of maintenance, according to your IMA light. Your automobile will most likely continue to run without inflicting long-term harm as long as your 12V battery light is not on. Some people can go months without experiencing a serious accident. However, it is not recommended to drive your car with the IMA light on because it might be dangerous.

The first disadvantage of driving with the IMA light on is that your car's performance may suffer. Your vehicle will seem sluggish and accelerate more slowly than usual. This occurs when your IMA isn't aiding your engine adequately. Because the extra power from the hybrid battery is not there, the combustion engine is put under more stress, resulting in reduced power.

The second disadvantage you can encounter is poor gas mileage. Because your engine can no longer rely on the electric motor for acceleration, regenerative braking, or idle stop, you'll have to use more fuel to keep it running.

What you should be concerned about is the possibility that your vehicle will have difficulty accessing highways. In high-traffic circumstances, without the regular acceleration you're used to, this can be rather dangerous.

Your car is unsafe to drive if the 12v battery light is illuminated. You're likely to come into problems with your vehicle not starting. In the worst-case scenario, your car may completely die while you are driving it. You want to stay as far away from these situations as possible. If you see the 12v battery light, you should pull over.

What to Do When Your IMA Light is On

When your IMA light is on and you want to know what is happening then check the error codes. It will provide you the useful information you need regarding the status of your IMA. Error code P1447 of 1st generation Insight 2000 -2004, for example, lets you know that the battery is at 10% or even less. So you can still get away with driving the car if in an emergency situation.

Error Code P1449, however, means your battery is about to fail and you will need to get to a mechanic ASAP. By adding a code reader to the car, DIYers can verify error codes. Alternatively, depending on your region, you can typically read your error codes at any chain auto-parts store.

Visiting a professional, on the other hand, is the safest option. The procedure of replacing your battery can be intricate, and if you hire a professional to perform it, you'll have a lower possibility of damaging the integrity of your car. When your IMA light illuminates, it's most likely time to replace your hybrid battery.