Head Gasket Leak Symptoms – What You Need To Know 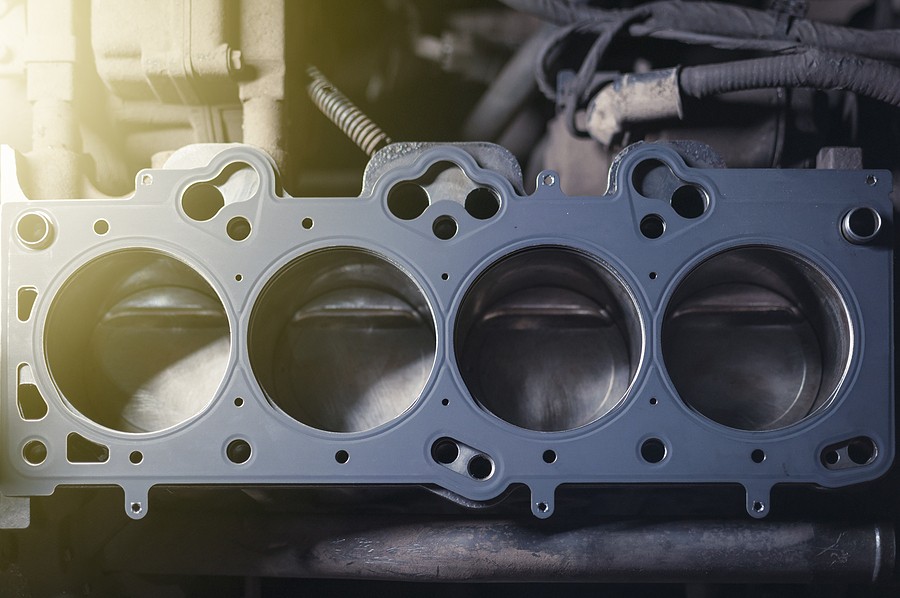 If your engine is suffering from a head gasket leak you may not be able to figure out exactly what is going on at first. Diagnosing a head gasket leak is harder than you might think, and certainly more difficult than many other common engine problems. Because of the size and location of your head gasket it's not always easy to identify it as the exact culprit. Fortunately there are a handful of symptoms that you can be on the lookout for that will let you know you do have a leak from your head gasket and there are some solutions that can help you get it fixed that may not be as costly as a full head gasket repair.

Let's take a look at what a head gasket is and what it does in your vehicle, how you can tell there's something wrong with yours, and what you can do to get it working again properly.

The head gasket in your engine is located right between the cylinder heads and the engine block. Like any gasket it is meant to create a seal that prevents leaks. That includes both liquid and gas.

A head gasket it's a very thin gasket that is full of holes to go around the cylinders. It actually looks more like something is missing from it then a piece of technology you might need to make your car run properly. Old versions of head gaskets were made of things like asbestos or graphite which are good at handling high temperatures but aren't the most robust materials in terms of standing up to years of wear and tear as well as dirt, debris, coolant and oil.

Modern head gaskets are made of a material called elastomer as well as very thin sheets of steel. That can make them extremely durable and well-suited to handling heat, but they're still susceptible to standard wear and tear and if they're forced to endure extreme conditions such as high heat or coolant with altered pH levels then it will wear down sooner.

How Do You Know if a Head Gasket is Leaking?

There are several signs that you can be on the lookout for to let you know your head gasket is failing on you or has sprung a leak. Typically, that's called having a blown head gasket. Let's take a look at some common symptoms.

Contaminated Oil: When your head gasket starts leaking then oil and coolant are going to mix together inside the cylinder and circulate through your entire engine. When you go to check your oil, the result will be a milkshake-like consistency and colour, a little closer to coffee-colored than vanilla but definitely rather creamy looking. This is a result of the coolant getting into the oil and contaminating it. You'll need to have your oil changed if you want it to keep working properly. It won't be able to lubricate and cool your engine otherwise.

If your coolant has become contaminated with oil, you'll need to do a coolant flush to clean out the entire system and then replace it with clean fluid.

Power Loss: Aside from sealing out oil and coolant from your engine compartment, the head gasket also maintains the pressure required for your combustion reaction to take place properly. When the head gasket blows, you're going to lose engine compression and the result will be a notable lack of power in terms of how your car is able to run. You'll have lower fuel efficiency as a result and your engine may sputter and struggle as well.

Can You Drive with a Blown Head Gasket?

When your head gasket blows out on you you're losing pressure in your engine. The lack of pressure in your combustion chamber means that the force that keeps your pistons rising and falling in the cylinders is going to be significantly reduced. That, in turn, means you will suffer a loss of power in general in your car. You'll struggle to get up to speed and maintain speed. Trying to tow anything or go up hills will also be much harder. By the same token you're going to be burning a lot more fuel and your car will be performing much worse.

This lack of pressure is also what leads to the oil and coolant leaking into your engine where it doesn't belong. Without the pressure to keep it out, you'll be burning these substances as well. That leads to engine overheating and poor lubrication. That can cause extreme damage for your cylinders, pistons, bearings, and more. If it goes long enough you can cause some serious and expensive engine damage as a result. An engine rebuild is a kind of repair that can cost you many thousands of dollars, so definitely this is not something you want to be driving around with.

The best thing you can do is repair your head gasket the moment you realize something is wrong with it before a bad situation gets any worse.

If you suffered a blown head gasket then taking your car into a mechanic is likely the best option you have is soon as you are aware of this problem. You don't want your engine overheating to the point where it fails on you completely and you cause serious damage requiring a rebuild.

A head gasket on its own is not a very expensive item. You can head to AutoZone and typically find them for somewhere between $20 and $50. Depending on the make and model of your vehicle there are some that may be a little more expensive, but that's a good ballpark figure that you can expect to pay.

Unfortunately, replacing the head gasket is not nearly the same as buying a new head gasket. The repair job when you take it to a mechanic will probably cost you anywhere between $1,000 and $2,000. That remarkable increase in price is due to the intense labour that's required to access the head gasket and put a new one in. The mechanic essentially has to take your engine block apart to get in there and the job is going to take many hours to get done. Even for a skilled mechanic, this is not a job that is just going to take an hour or two.

A $1,000 or $2,000 price tag for a head gasket repair does sound intimidating, but you may be able to avoid such a high price. It's possible that you can use a head gasket leak sealer to fix the problem and save yourself quite a bit of money as a result. Head gasket leak sealers are compounds that you can buy from auto supply stores, even places like Walmart and amazon.com. It's a bottle of liquid that you will pour into your radiator. The substance will circulate through your cooling system and when it reaches your engine the chemical compound will fill in the cracks and holes that have developed in your head gasket. As you drive your vehicle the heat causes it to solidify and seal the cracks, repairing your head gasket in the process.

Always make sure you follow the exact directions on the package for the leak sealer you bought just to make sure you're using it correctly. Most of them work in a similar fashion, but they may have different rules for how long you need to run your engine before it works exactly the way it needs to.

Most of the head gasket sealers on the market are not meant to be permanent solutions to head gasket problems. That said, some brands do typically work better than others. Your best bet is to research what's going to work best for your vehicle. If you have a big V8 engine, for instance, you're going to need a sealant capable of handling an engine of that size. Also make sure you are getting one that doesn't react with antifreeze because some cheaper ones will.

Just remember, because these are not permanent solutions to a busted head gasket, it's likely to fail on you again in the near future especially if you haven't addressed the underlying issue that caused your head gasket to blow in the first place. If your head gasket blew because your engine is overheating or because the pH is off in your coolant due to it being badly contaminated, you need to address those issues, or the same thing is going to happen all over again with the head gasket you just repaired.

Also, if your head gasket blows out badly enough and the damage is too severe then a head gasket sealant will not be able to fix the damage and you're still going to have to head into a mechanic to get the job done. Still, considering how much money you can save, it's definitely worth a try to see if you can get your head gasket working properly again with a bottle of leak sealer rather than the alternative if you can avoid it.

A leaking head gasket can be a big headache for any driver. Not only is it going to cause some serious inconvenience it can lead to a lot of damage if you let it go for too long. Worse, when you do get it repaired it could end up costing you quite a lot of money at the mechanic if something like a leak sealer is not able to fix the problem for you. Unfortunately, it absolutely has to be repaired because not fixing a head gasket is going to be much worse for you in the long run.

PrevPreviousThe Best Car Speakers in 2021 Upgrade Your Car’s Speakers For Better Musical Experience!
NextTips for Thinking Less like a Buyer and More like a Seller When you are Selling Your Used CarNext