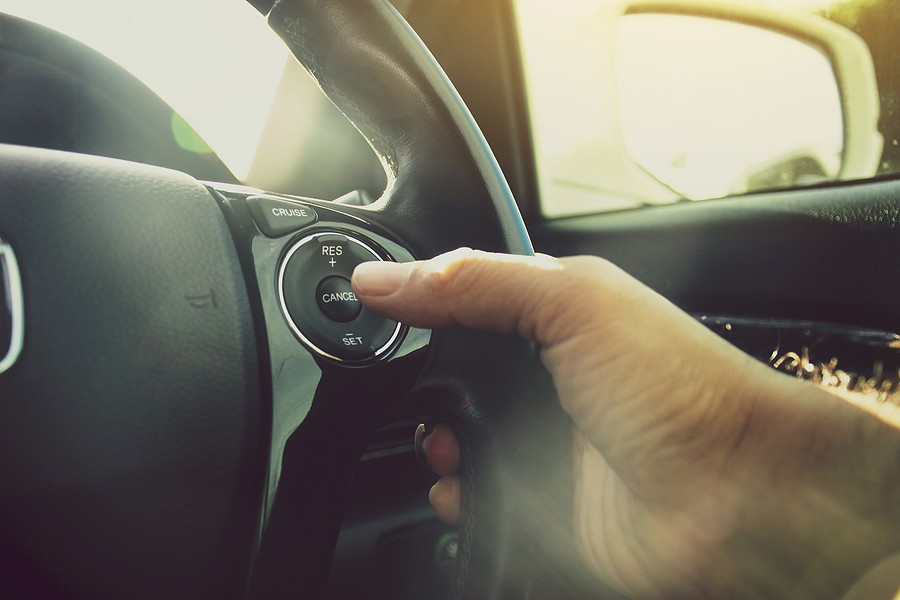 Cruise control is one of those convenient features on your car that can make driving just a little bit easier for you. Also called speed control, it allows you to set the speed of your vehicle so that if you're on a long drive, you can maintain a certain pace without keeping your foot on the gas. Once you've got up to speed, typically above 25 miles per hour, you can set the cruise control to maintain that speed so you don't have to keep your foot on the gas the entire time. It's the sort of thing you want to use on the highway when you have a long stretch of road ahead of you and you want to take it easy. But, as with any system in your vehicle, cruise control can stop working on you from time to time.

How Does Cruise Control Work?

Before trying to figure out why your cruise control isn't working it's good to know how it's supposed to work in the first place. Cruise control manages the speed of your vehicle in pretty much the same way you do when you have your foot on the gas. It adjusts the throttle position to maintain a speed while you're driving. The cruise control is able to control the throttle valve by a cable that's connected to the actuator rather than having to press the pedal like you do with your foot. The throttle valve is what controls the speed and power of your engine.

When you turn on your cruise control the actuator moves the cable that's connected to a pivot and that in turn adjusts your throttle. It also pulls on the cable that's attached to your gas pedal as well. If you’ve ever taken the time to look while you're driving with the cruise control engaged you'll see that your gas pedal still moves as though you're pressing it even though you don't need to control it yourself anymore. That's the reason why, it's being controlled by your cruise control at this point.

Depending on the kind of cruise control you have, the actuator is powered by a vacuum system. If the vacuum were to be damaged in some way, the cruise control would not function properly any longer. However, there are a number of newer cruise control systems available that may not operate the same way. It really depends on the make and model of your vehicle and how the manufacturer designed the system.

Signs and Symptoms of a Bad Cruise Control

When your cruise control isn't working correctly there can be a number of reasons for it to happen and also a number of signs you can be on the lookout for it to let you know that you have a problem. If you're experiencing any of these then you may want to take your car to a mechanic to get it checked out so that you can have the system fixed again.

Bad Brake Pedal Switch: When you put your foot on the brakes other drivers are aware that you're going to be slowing down because the lights at the rear of your vehicle turn on. The brake pedal switch is what allows the brake lights to come on when you put your foot on the brake. As a safety feature, cruise control is designed to turn off when you put your foot on the brake. Obviously, it would be extremely unsafe if your car just kept going no matter what you did to try to stop it. That said, if your brake pedal switch isn't working the way it's supposed to then it may send faulty signals to the cruise control as a result. When that happens, your cruise control will be thinking you're trying to brake even though you're not so you either won't be able to engage at all, or you'll find that it turns off frequently when you're driving because of the bad signals coming from the brake pedal switch.

Bad Spiral Cable: The cruise control in many vehicles is activated by a switch that is found on your steering wheel. There's a spiral cable that is inside the steering wheel that connects to the switch itself. If there's a problem with the cable, it's frayed or broken, then you may have an open circuit and you will be unable to engage the cruise control when you try to turn it on as a result.

Bad Fuse: Because the cruise control in your vehicle is one of the many electronic components in your car, its operation relies on a fuse. Just like the fuses in your house, if this fuse burns out then the cruise control will not be able to work properly any longer because it's not getting the electrical power it needs to keep operating.

If your cruise control system has shorted out, then the cruise control will no longer work. You'll need to locate the fuse that controls it and swap it out for a new one. Depending on the make and model of your vehicle you may have to either look in your owner's manual or check out online to find out where the fuse that controls your cruise control is located. Typically, a new fuse for your car is only going to cost you a couple of dollars, so if this is the problem you can potentially fix it yourself for very little money.

Bad Vacuum Actuator: Depending on how old your vehicle is, your cruise control may rely on a vacuum actuator and associated cables that connect it to the throttle in order to keep it working. If either the cables or the vacuum actuator itself fail, then the cruise control will no longer be able to work. You'll need to replace the actuator, the cable, or the damaged hoses in order to get it working again.

Bad Switch: Your cruise control is going to be activated by use of a button or switch, typically found on your steering wheel. If the internal contacts in that switch have broken or worn out somehow then when you press the button it's not going to be able to send any signals to the cruise control module to let it know that you're actually trying to engage the system. That will in turn disable your cruise control and prevent it from working.

Bad Vacuum Bleed Switch:  The vacuum bleed switch is on the base of your brake pedal and this is what deactivates your cruise control when you put your foot on the brake. If there's a problem with the switch, when you put your foot on the brake you may be unable to actually deactivate your cruise control as a result. As you can imagine this could be a serious problem because even though you're trying to stop your car, the cruise control is still engaged and it is trying to maintain the same speed that you set it at. If you're experiencing this problem you definitely want to get the switch fixed as soon as possible, because you are potentially going to get into an accident as a result if you're unable to slow your vehicle.

Hissing Noises: It's possible that if you have a problem with your cruise control vacuum bleed switch, you'll notice a hissing sound coming from somewhere inside of your dashboard. This isn't true of every vehicle, but in some the vacuum goes through to the switch on your pedal underneath your dashboard. If you have a problem with the vacuum hose, then you'll hear the hissing sounds which are caused by the leak in the system.

Check Engine Light: Depending on the make and model of your vehicle, and this is typically true only of newer vehicles, but if you have a check engine light pop up on the dashboard that can prevent you from being able to engage your cruise control until such time as you get the check engine light sorted out.

Electrical Issues: Beyond a problem with a fuse that may be causing your cruise control to malfunction, there are a number of other potential electrical issues that could be occurring which will prevent your cruise control from working as well. In addition to the fuse you could be looking at anything from a wiring harness to various connectors to ensure that everything is secure and not frayed or broken.

Depending on the nature of the reason that your cruise control failed, there should be a range of prices associated with getting repaired again. If the problem you're facing is with your cruise control switch, then you're looking at probably between $150 and $350 to get it repaired including the cost of parts and labour. Again, this very much depends on the make and model of your car. For instance, a Kia Sorento may cost you around $200 while Chevy Express 2500 will be closer to $300.

If the issue is as simple as replacing a fuse, you could literally buy one for under $5 and if you replace it yourself that would be the only cost associated with getting your cruise control working again.

On the other hand, if the problem with your cruise control is related to the actuator then repair cost could get quite a bit steeper. Replacing a cruise control actuator may end up costing you over $700.

If you are someone who likes to go on a lot of long road trips or has to drive frequently on the highway for work then cruise control is definitely something that you want to keep in good working order all the time. It can relieve a lot of strain when you're driving and ensure that you don't have to worry about any problems with your foot getting too heavy and going over the speed limit. It's just one of the many convenient tools that a car can offer you to make the driving experience a little more relaxing and a little more stress free. But if it's not working, then it can have the exact opposite effect.

If you're noticing that your cruise control keeps disengaging, or it stays on when you don't want to then you're going to want to get to a mechanic as soon as you can to have it looked at. Especially if you're not able to disengage the cruise control because that is the prime condition for an accident down the road.