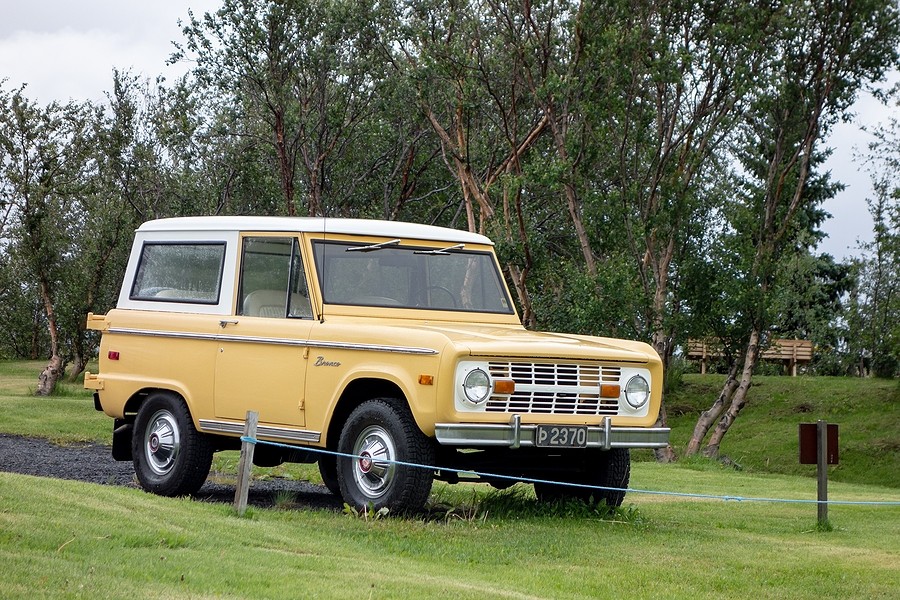 Way back then SUVs were more popular for how cool they look, more than just their practicality. You can check the simple yet very capable first generation 1966-77 Ford Bronco. The Bronco wasn’t the pioneer among its class, but it was the first to hint that the segment had a lot of potential. When it debuted in 1966, it looked pretty rudimentary and it’s $2,400 base “roadster” model didn't have doors or a roof. Despite this, it is an apparent break from the kind of work trucks that Ford and its major rivals commonly built. The Bronco’s 92-inch wheelbase was perfect for both around-town maneuvering and off-road rock crawling.

The classic Ford Bronco is one of the most complicated yet simple vehicles ever made. It’s definitely a drivable classic! No wonder it is becoming one of the most sought after collectible vehicles on the market. But what makes a classic Bronco? Basically, those that belonged to the first-generation Ford Bronco are considered a classic. They were produced between 1966 and 1977. What makes them more special than other rivals is that they are considered one the first SUVs ever built. So yes, the 1977 Bronco is considered a classic.

The specifications and features of the 1977 Ford Bronco make it particularly a desirable vehicle collection. The 1966 first-generation Bronco is Ford’s answer to the Jeep. Ford wasn’t the only one that had the idea, and soon each automaker had a small but competent off-roader vehicle. Rivals such as the Chevy Blazer, provided convenience and comfort options at launch. By 1977, the Chevy Blazer outsold the Ford Bronco at a 5:1 ratio.

In response, Ford adapted and the 1977 Bronco now came with comfort features such as power brakes and power steering. However, these features were a little too late to save the first-generation Bronco. Over the years, these additional options are the reason the 1977 Bronco is so well-liked. This was the year the Bronco was able to find its stride. Ford had fully reinvented the Bronco for the next generations. The lackluster sales performance of the 1997 Bronco was partly due to a lack of options.

Ford wasn’t able to make automatic transmission available for the Bronco until 1973. The engine options

in 1974 with 25,824 units sold. The expanded options were most likely reasons for the Bronco’s rising success. However, in 1975 Ford decreased their engine options to one. Not having a V6 automatic option, less people were interested. So the 1975 Bronco became the worst year in terms of sales. That year only 13,125 Broncos were sold. Ford’s decision not to expand their engine selections sealed the fate of the first-generation Bronco.

The 1977 Bronco had a 302 CID V8. It was 100 percent tried, tested and worth it. However, a very limited number of vehicles with one engine option are able to do well in the market.

The main features that set the 1977 Bronco apart is related to fuel storage. The 1977 model is the only first-generation that has a gas door instead of a cap. With a tank that can hold 14.4 gallons, it has the largest fuel tank. Others only have 12 gallons fuel tank capacity.

The 1977 Ford Bronco has a Dana 44 front axle and a Ford 9” rear axle. It is particularly sought after and it’s durable. The heavy-duty 9” rear axle housing was a nice addition.

In 1977, power brakes were offered as an option. The standard model comes with disc brakes. The 1976 and 1977 models also got improved rear brakes.

The taillights also needed minor restyling because a gas door replaced the gas cap. Despite being the last of the first generation Bronco, there were still many color changes. Hatteras Green Metallic, Medium Green Glow, Glen Green, Ginger Glow, Mecca Gold and Cayan Red were discontinued. They were replaced with Cinnamon Glow, Light Blue, Light Jade, Medium Copper, Orange, Jade Glow, Silver Metallic and Medium Emerald. The color selection’s theme was a mix of fun and inspired by nature which was exactly what Ford wanted to create with the Bronco. This is reflected through all the color palette offered on the earlier models. For more personalization, they offer a variety of appearance packages.

The Special Decor Group is another option for those who want to enhance the exterior of the Bronco but is not so much into chrome. This is less flashy. It featured a black grille and a body stripe on the hood. One of the most interesting things about this package was that it could be mixed with the Ranger or Sport Package. But it would add all of the Sport’s chrome.

This package came in 1972 which means it had a longer availability than an automatic transmission. The Ranger package offered everything that came with the Sport and more. The opulent interior was fully carpeted in color-keyed hues. It has cloth and vinyl seats. The cloth has a houndstooth pattern. The exterior has all the features you could find in the Sport package. On top of that, the swing-away spare tire carrier got a vinyl cover that screams Bronco Ranger.

Just like other first gen Bronco, the 1977 Bronco has the “92-inch wheelbase” model.

The Bronco may have been created to be an off-roader, but it is not of the same level as modern ORVs. To make it more understandable, one thing you should know is that before the extreme 1990s, people’s idea of off-roading was camping or driving on dirt roads.

Off-roaders these days have significantly better off-roading specs. The JL Rubicon Wrangler got a 44 degree-approach angle, compared to Bronco’s 39.3.

You can improve the Bronco’s off-road angle through lifting it and getting new and larger tires. However, its capacity will remain 2,000 pounds. To add some perspective, a Prius’ towing capacity is 1,500 pounds and a 2019 Ranger has a towing capacity of 3,500 pounds. But if you’re only going to go camping or fishing with the family then the Bronco is going to be more than enough. And if that isn’t enough, you will also look sharp on the way. For serious off-roading, it is not a wise choice to use a classic Bronco.

A well-restored 1977 Bronco is definitely a collector’s item, and for this reason modifications for 1977 Broncos are more on restoration. To keep your engine in good working condition, you should replace air filters, oil filters and necessary gaskets. If you do maintenance regularly, you can have your Bronco running for years to come.

If the Bronco you’ve got is in project condition, then you should prioritize replacing any broken or rusty parts since rust spreads fast. Usually the only thing you could do to prevent rust from damaging your Bronco is the replacement of the metal sheet where it first appears. Make sure to have pitted chrome parts fixed before they become damaged then reapply a clear coat to maintain its shine. Since interior parts wear and tear, replacement is needed so your Bronco remains comfy and presentable.

This Bronco is a great pick if you want to have a first gen Bronco which is already feature-equipped. However, the 1977 Bronco’s combo of features and scarcity make it hard to find. Some companies have even started manufacturing new “1977” Broncos.

Things to Consider When Buying a Classic Ford Bronco

So you’ve decided to buy yourself a classic Ford Bronco. To make sure you are satisfied with what you’ll buy here are some things to consider: