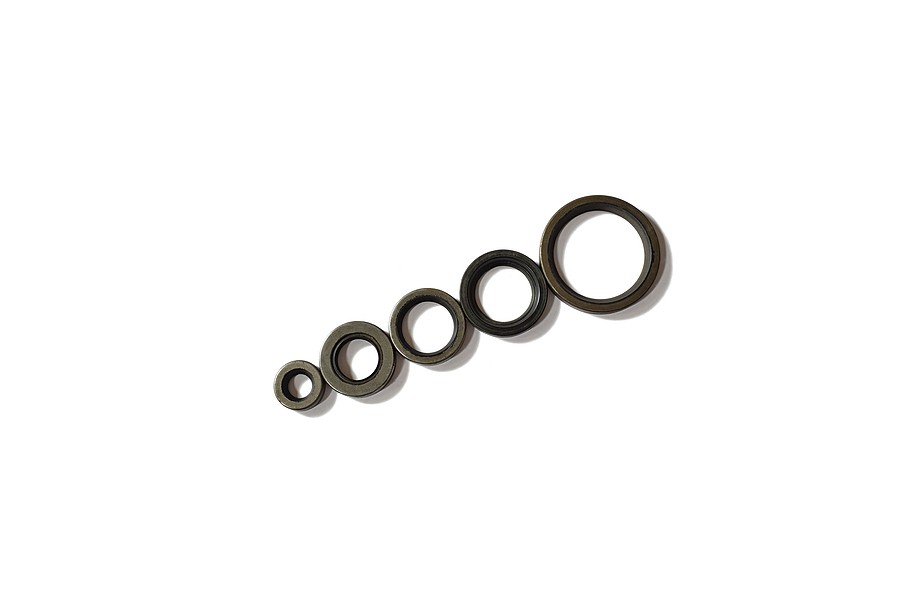 Camshaft seal replacement cost ranges from $363 and $456. The price can jump significantly and reach about $1000 depending on your vehicle's manufacturer. The part itself is very cheap, and it's usually between $22 and $27; However, labor cost is the major component in replacing any camshaft seal.

The camshaft seal is responsible for preventing any oil leaks from the camshaft to the surrounding engine components.

For the camshaft to work properly, it requires a certain oil level to prevent any contact with metal components that could lead to friction which could damage your engine due to overheating.

If the seal gets damaged, it is very easy for that oil to escape from around the camshaft and make its way towards the cylinder. Once this oil reaches the cylinder, you will notice smoke smells or smoke trails.

It is very important to make sure that you will always have a working camshaft seal. Otherwise, you might deal with significant damages to your engine's components.

This article provides it with all the necessary details we need to understand, and we focus on how much it will cost you to replace the camshaft seal, the symptoms of a bad camshaft seal, and the main role of this camshaft seal in your combustion system.

At the end of this article, we will provide you with a step-by-step on how to replace your camshaft seal so you can save on labor costs.

What is the camshaft seal, and what does it do?

Before we discuss the details about the camshaft seal, Let's make sure that we're on the same page on how the camshaft works.

The camshaft is one of the most important components of your combustion system. It is located on top of the cylinders and its primary job is to control the opening and closing of the intake and exhaust valves.

As the camshaft rotates, both intake and exhaust valves open or closed depending on your engine's needs.

Between the camshaft itself and the cylinder wall, there is what we call the camshaft seal. Is responsible for making sure that air or fuel does not escape from the engine. Thus, your cylinder will always be under the optimum pressure to generate the power.

The seal is also responsible for making sure that the camshaft is always lubricated, and as it's moving, there is no metal touching each other which means there is no friction that could result in too high heats. High heats are the worst enemy to your engine, and it can't simply cause engine destruction.

Over time of use, it is not surprising to deal with a broken or damaged camshaft seal. Imagine this part is always exposed to high heat's which makes it very susceptible to getting damaged.

If the seal gets damaged, the oil will leak from around the camshaft. Thus, the camshaft will not receive the proper lubrication. As a result, you might face significant engine overheating that could damage not only the engine but also contaminates the entire engine's components.

Usually, the seal is strong enough to stand the lifespan of your camshaft. Thus, you will not need to replace the camshaft seal unless you replaced the camshaft itself.

Symptoms of a bad camshaft seal

In the automobile world, there are always symptoms of bad or faulty components. First, as a driver, you need to educate yourself on the main symptoms of major damages.

For example, when the camshaft seal starts to go bad, it will tell you before it even does. There are very clear symptoms of a bad camshaft seal which includes:

Since the seal is responsible for preventing any oil from leaking outside of the camshaft, the first most obvious sign of a bad camshaft is an oil leak.

This oil leak will not be to the bottom of your vehicle, and it's not something you will notice like a puddle of oil under the car. It will most likely be some drops of oil around your engine's rear part right close to the valves.

If the leak is severe, you might even start seeing some oil dripping around the corners of the engine itself.

Imagine if oil makes its way to the exhaust system; what will happen? Another obvious symptom of a bad camshaft seal is the smoke smell or smoke trails coming out of the engine component.

This oil can quickly get burnt to produce some smoke smell or smoke streaks. Depending on the severity of the leak and the damage to your camshaft seal, the degree and intensity of smoke might differ significantly.

If you have noticed any of the mentioned symptoms of a bad camshaft seal, you must take immediate action and have your vehicle inspected and repaired by a professional mechanic. Otherwise, you might scarify one of the most important components in your car, which is your engine.

How much does it cost to replace the camshaft seal?

To give you a closer look at how different the camshaft seal replacement cost is between different types of cars, let's take a look at the table below:

As you might notice, the price range is significantly high, and we are only listing relatively older vehicles. We did not introduce any of the brand-new vehicles of this year or the year before.

One might argue why can't I replace my camshaft seal and save a ton on repair cost? Well, that is true, and it makes a lot of sense. However, replacing the camshaft seal requires a very long time of experienced mechanics. Imagine how much time will take you if you don't have any previous mechanical skills in replacing such part?

Plus, it is very important to keep in mind that any DIY does not work the first time. Therefore, you don't want to test the first DIY on your vehicle engine because you might introduce significant damages to the entire engine.

How long do the camshaft seal last?

According to automotive experts, the camshaft seal should last up to 80,000 miles. However, this number can be much lower depending on your vehicle's own circumstances.

The camshaft seal is designed of a mixture of metal and rubber. The rubber component ensures that heat does not reach their metal component, and therefore, the camshaft seal should last and withstand the high heat coming from the engine.

How to replace a camshaft seal?

As you already noticed, labor cost is the biggest component in the camshaft seal replacement costs. Thus, many drivers tend to learn how to replace their camshaft seal instead of wasting all this money on labor costs.

As we mentioned earlier, it is very important to make sure that you are comfortable replacing this component. Otherwise, you might introduce significant damages to your entire engine block.

If you still would like to get an idea about how this part is replaced, here is a summary of step-by-step guidance on how to replace a camshaft seal:

Before you dig into the details about replacing the camshaft, the first step is to make sure that the problem is coming from the camshaft seal.

To do so, you can reach out to a professional mechanic who can use certain toolsets to help him inspect your car and confirm that the problem is coming from your camshaft seal.

The last thing you would want to do is start any repair shop without having all the same materials. For this certain job, you will need a relatively long list of materials which includes the following:

You will most likely be working under the car; Therefore, it is time to raise your vehicle using a Jack and Jack stand. Make sure to chock the wheels, so the vehicle doesn't slip as you're working to prevent causing any injuries to yourself.

Once the vehicle is raised, use the drain pan and drain all the engine oil out. By now, you should be ready to replace the camshaft seal.

Take out the timing belt and all associated components around it. You also need to remove the camshaft sprockets.

Using a simple screwdriver or any oil seal puller, take out the old damaged camshaft seal. When you're doing so, ensure that you don't damage the camshaft itself by scratching it.

Once the old camshaft seal is removed, clean out all the area before installing the new seal. It is also recommended that you apply a stuff gasket maker and put some grease to help install the new camshaft seal properly.

Place the new camshaft seal in the right place by driving it slowly without causing any damage is to the camshaft itself.

Once the camshaft seal is installed, you can now go ahead and reinstall the sprockets, the timing belt, and all its associated components.

That's it! All it needs to do now is to lower your vehicle slowly and test drive the car to ensure no symptoms of a bad camshaft seal.

The camshaft seal is one of the most crucial components in your vehicle's combustion system, although it is very small. It prevents any oil from leaking from the camshaft towards the inside of your cylinders.

It is very important to release the camshaft seal whenever it gets damaged. Otherwise, you might introduce significant damages to your engine.

Replacement costs can be very high, especially on the labor costs part of it.

If you feel that replacement costs are getting close to 75% or more from your vehicle's value, it is recommended that you sell this car instead and use the payment towards a better vehicle.

If you're looking for someone to buy your car with a damaged camshaft seal or even a completely damaged engine, we will always help you!

Cash Cars Buyer would love to buy your car, and all that it takes you is a quick conversation with our team.