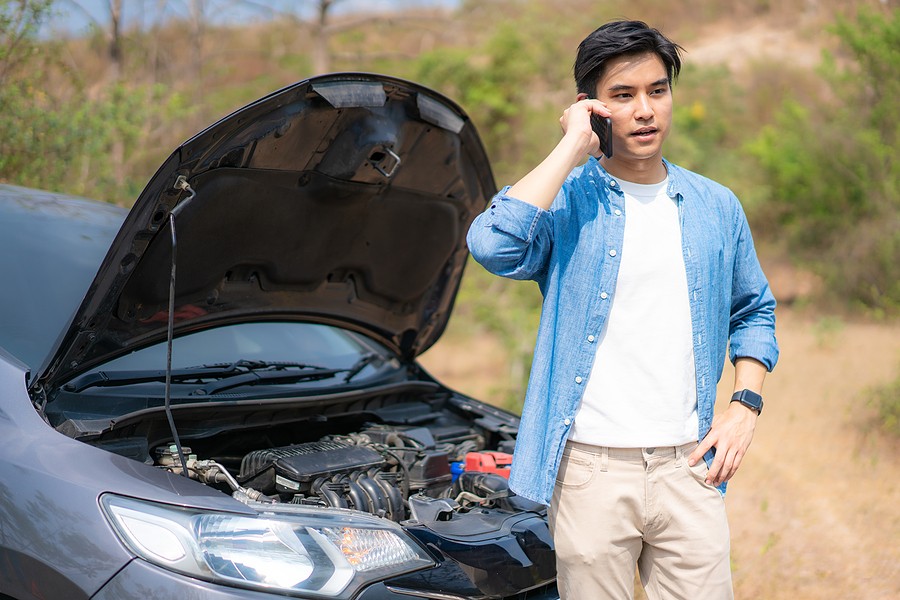 With over 30,000 parts in the average car there are seemingly countless ways that it could potentially break down on you. But if you're having trouble even getting your car started, then it's certainly possible you have a problem with a bad starter in your vehicle. You need to narrow down the symptoms of a bad starter to help you figure out exactly what kind of problem you're dealing with because there are a number of other potential reasons your car might not start on you that are unrelated to the starter itself.

The starter in your car is essentially a small motor that is used to give your actual engine a push to get going when you first put your key in the ignition. The starter is powered by your battery and a starter relay is what transmits the power from the battery to the starter motor itself. If your starter fails to work, then your car simply will not start at all. With that in mind, let's take a look at some of the most common symptoms of a bad starter.

Most Common Symptoms of a Bad Starter

Engine Won't Crank: It's a good sign that you have a problem with your starter when you either turn the key in the ignition or press the button to start your vehicle and nothing happens at all. If your starter motor has burned out, it will be unable to get your engine started in the first place so nothing will happen when you try to start your vehicle. It's worth remembering that this is not the only reason that this could happen to your car. A dead battery can present itself in the same way as well.

Noises: Another very common symptom of a bad starter is a grinding noise that your car may produce when you try to get your vehicle started. This is caused by gears inside your starter that are connected to the flywheel in your engine wearing out. There's also gears inside of the starter itself that can start grinding audibly.

Arguably the most common symptom of a problem with your starter is the clicking noise that it will make. This noise is hard to mistake for anything else and it is actually fairly low-key. However, if you do you hear it then it's pretty unmistakable and almost guarantees that the problem you're dealing with is related to your starter and not some other part of your engine

Smoke: It's possible that your starter motor will overheat on you as you try to start your vehicle. The starter is powered by your battery and it's supposed to turn off after you have started your car. However, issues with the wiring can lead to your starter not shutting down properly which can lead to it overheating. The starter itself can be damaged when this happens, and you'll likely end up having to deal with some smoke as well as a burning smell permeating the cabin of your vehicle.

Remember, anytime you see smoke coming from your vehicle you should be pulling over as soon as it is safe for you to do so. Regardless of whether it's the starter or some other part of your engine, smoke can often lead to fire and serious danger.

Lights but Nothing Else: If you turn your key in the ignition and the lights on your dashboard display pop-up but your vehicle can't start, then that's a pretty good sign that you have an issue with your starter. Your display lights wouldn't be able to turn on if it was a battery issue, so the starter is the most likely culprit for this case.

Jump starting a car with a bad starter is not a fix to the problem. The starter and the battery do demonstrate similar symptoms when there's something wrong with them, but the fixes are not the same at all. A jump-start is only going to get your battery working again for you. It will have no effect at all on your starter.

It's worth noting that if you have a car that features manual transmission instead of automatic, then you may still be Able to start your vehicle even if the starter itself doesn't work. In manual transmission Vehicles you can actually push start the car in a way that allows the engine to essentially sidestep the starter.

The process of push starting a manual transmission car with a bad starter is not all that complicated. Basically, all you need to do is put the car in second gear. This will work best if you're on a bit of a decline so you can gain some momentum as you roll down hill. Then, switch your ignition on and depress the clutch. Ideally you need a friend or two to push your car until you're coasting at about 5 miles to 10 miles per hour. The faster the better for this kind of job. Once you're up to speed, you can release the clutch and then depress it and you will hopefully have got your car started.

One thing you need to remember about this method of getting your car going is that you can't really stall your car. And if you stop your vehicle, you may not get it started again unless you perform this whole process a second time. So if your starter motor is bad and the only way you can get your manual transmission car going is by a push start, you should use this opportunity to drive to mechanics to get the problem fixed, otherwise you'll be push starting your car every time you need to go somewhere.

The last thing you need to remember about push starting a vehicle with a bad starter motor is that it really does have to be a manual transmission vehicle. This could cause some serious damage if you tried it in a car with automatic transmission.

How Do You Tell if it's Your Starter or Your Battery?

If you're having trouble getting your car started it can often be the fault of either the starter, the battery, or the alternator. You can be a little Troublesome figuring out which one is to blame because there are some common problems that they may share. But there are also some differences, so if you know what to be on the lookout for, you'll be able to tell which one has caused the problems with your vehicle.

if the battery is to blame for your car not starting properly then you will probably hear a kind of whining sound when you turn the key in the ignition. Also, a jumpstart will get your car working fine again if the battery was to blame. This is especially true if you notice that when you first try to start your car, or the lights are rather dim but then they brighten up again once the engine gets started.

If the alternator is to blame for your vehicle not starting then you may notice that your lights start out fairly break and actually dim or begin to flicker. It's also possible that when you get a jump start your car will get going right away and then die shortly thereafter.

In the case of the starter, you need to keep your ears open for that telltale clicking sound that happens when you turn the key. The engine will not engage but you will hear that click. Also, when your starter is to blame for your car not working properly, you'll notice that the dashboard display lights come on, but the engine won't start at all.

What Causes Your Starter to Fail? – Bad Starter Symptoms

Starters can fail for any number of reasons, although there are a handful of more common problems that may be to blame.

Oil Leaks: If you have oil leaking from the rear of your engine it can actually end up leaking all over your starter. If this is allowed to continue for a long enough period of time, your starter will actually we're down and fail on you.

Bad Connections:  Your starter gets its power from the battery. If the wires connecting your starter to the battery are corroded or damaged in some way, that's going to affect its ability to transmit power. That in turn can stop your starter from working the way it needs to. Likewise, if you have some loose wires that you may end up dealing with power surges which can cause excessive wear on your starter, causing it to fail much sooner than it should.

Corroded Battery: Much like the way bad wiring can affect how power is transmitted from the battery to the starter, if the problem is at the source itself in your battery terminals are corroded then you can't expect that you're going to get consistent and reliable power from the battery.

Cost of Fixing a Bad Starter

The cost depends on more than just the make and model of your vehicle as well. Depending on how the starter motor failed, it could have caused some collateral damage when things were going wrong. For instance, if you're here you're grinding sounds then that could have caused problems both in your starter as well as other parts located very close by.

When you get that telltale grind out of your starter motor it's probably something like the flywheel is being damaged or the ring gear that attaches to the flywheel. Regardless of the source of the sound, you're going to have to pay a significant amount if you want to get it fixed properly.

Is it Worth it to Replace Your Starter? – Bad Starter Symptoms

At the end of the day this is a bit of a trick question. If you want a car that runs, then it absolutely is worth it to replace your starter because your car is not going to work without it. As we said, you have about one option when it comes to getting your car started without fixing the starter and that requires you to have a manual transmission vehicle that you can push start. If that's not the case, then your car is not going to start because of your badly damaged starter.

Never sit on this problem for too long as it's going to simply snowball and get worse overtime. your best bet is to make an appointment with your mechanic as soon as you notice a problem so that you can get it taken care of before it goes from a bad situation to a worse one

Without a properly functioning starter your car is essentially useless at that point. For that reason, you need to make sure you are keeping an eye on any potential symptoms that could indicate to you that you have a problem with your starter, as we indicated. The big problem with things like your Starter going bad is that many of the symptoms mimic a whole host of other problems in your vehicle. That's why you'll need to keep your eyes and ears open in case you're experiencing two or more of these symptoms.

Your best bet is always to take your car to a licensed mechanic whenever you have the earliest opportunity. Anytime you leave something damaged on your car for too long, the situation will inevitably get worse.