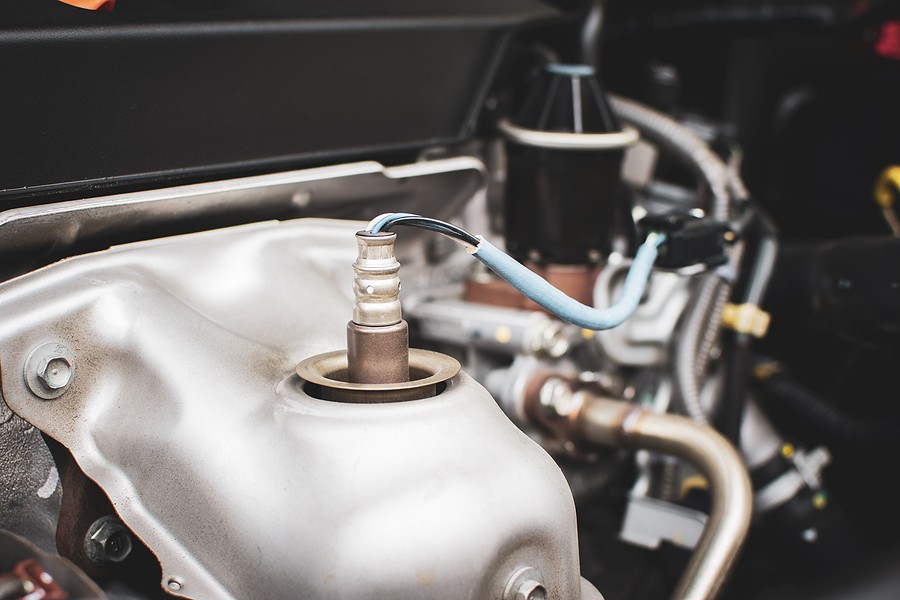 What Is an O2 Sensor?

An O2 sensor, which is also commonly called an oxygen sensor, is a device that is installed in the exhaust system in your car. It’s in charge of monitoring how much oxygen is in the gases that leave your engine and make their way out of your car. It communicates directly with your engine’s computer and lets it know how much fuel to use based on what it’s able to learn from the gases that are leaving your engine. There are typically anywhere from two to give O2 sensors in a car positioned both before and after a car’s catalytic converter.

It’s very important for you not to drive around with a single bad O2 sensor in your vehicle because it can throw off how much fuel your engine uses. You might not be able to get the kind of fuel economy that you would expect out of your car if it has a bad O2 sensor in it. It’s why you should keep a close eye out for any bad O2 sensor symptoms and do something about them right away. You could put your engine into harm’s way and spend more than you want to on fuel for your car by driving around in a vehicle with a bad O2 sensor in it for an extended period of time.

How Does an O2 Sensor Work?

Now that you’re slightly more familiar with what an O2 sensor is, we want to dive into how one works to keep your car’s engine humming along like it should. It’s a pretty complicated process, but we’re going to break it down into the simplest terms possible so that you can see first-hand why you don’t want to spend any time driving around in a car with a bad O2 sensor in it.

Your car’s engine produces gases that it sends through your exhaust system so that they can be carried out of your car and let out the back. As these gases pass through your exhaust system, the O2 sensors in it keep tabs on how much oxygen is in them. While it does, it “talks” to your engine’s computer and lets it know as the oxygen level in the gases rise and fall. By doing this, it provides the computer with the information that it needs to adjust how much fuel your engine uses accordingly.

In the event that an O2 sensor stops working like it’s supposed to, your engine’s computer won’t know how much fuel that it needs to use. This could result in it burning through more fuel that it really needs in an effort to get the right readings from your O2 sensors. But of course, a bad O2 sensor won’t allow for this to happen, which will result in your engine burning through even more fuel in the future. You need to replace a bad O2 sensor to stop this from happening.

How Often Should O2 Sensors Be Replaced?

The O2 sensors that were found in many older cars weren’t designed to last all that long. It’s a big part of the reason why you’ll find so many older cars that don’t get great gas mileage. But about 25 years ago, auto manufacturers started to produce higher-quality O2 sensors that could stand the test of time. As a result, it’s now not all that uncommon for O2 sensors to stick around for 100,000 miles or long in most cases.

That being said, you might have O2 sensors in your vehicle that are going to break down on you before then. So you need to be prepared to monitor your car for any signs of a bad O2 sensor. Your O2 sensors can conk out on you at any time and stop working completely. Replacing them will be the only option that you have when you get to this point.

What Are the Most Common Symptoms of a Bad O2 Sensor?

Check out several of the other common symptoms of a bad O2 sensor below:

Some people also find out that they have a bad O2 sensor in their car when they fail an emissions test during an inspection. If this turns out to be the case, you’ll have to replace your bad O2 sensor before you’re able to pass your test. You won’t have any other choice but to put a new O2 sensor into place.

Can You Continue Driving a Car With a Bad O2 Sensor?

How Should You Go About Replacing a Bad O2 Sensor?

Fortunately for you, replacing a bad O2 sensor is not all that complicated of a job. You can have it done by taking your car to almost any auto repair shop with ASE-certified mechanics working at it. They can figure out if you do, in fact, have a bad O2 sensor in your car and then get down to business by replacing it. They will have to replace it rather than repairing it since it’s not a part that you can bring back to life.

One thing that you should keep in mind when it comes to your car’s bad O2 sensor, though, is that it could indicate other issues within your exhaust system or within your car as a whole. There are times when an O2 sensor will go bad due to an oil or coolant leak in your car. If this turns out to be the case, you’re going to be looking at a slightly more complicated—and expensive—repair job. Your mechanic will be able to let you know if you need to worry about this once they’ve had an opportunity to check out your car.

Should You Ever Attempt to Replace a Bad O2 Sensor Yourself?

If you have a little bit of experience with working on cars, replacing a bad O2 sensor is one of the jobs that you might be able to take on yourself. It’s actually a fairly simple job when you get right down to it, as all you’ll have to do is identify the bad O2 sensor in your car and use the right tools to replace it. You might want to try tackling this job in an effort to save a few bucks.

You should not, however, attempt to replace a bad O2 sensor if you don’t have the slightest clue as far as what you’re doing. You could end up removing and/or installing an O2 sensor and do your car more harm than good. If this happens, your new O2 sensor might not do the job that it’s designed to do and could continue to wreak havoc on your engine. You should consider hiring a professional to help you with O2 sensor replacement if you don’t feel comfortable in your ability to do it yourself.

How Much Does O2 Sensor Replacement Cost?

When you look at an O2 sensor up close, it doesn’t look like a part that would be all that expensive to replace. But it’s actually a lot more costly than many people realize. You’re going to have to be ready to pay for a relatively expensive repair if you ever have a bad O2 sensor in your vehicle.

And remember: Replacing a bad O2 sensor might not be all that needs to be done by your mechanic. There could be other issues with your car that are at the heart of your O2 sensor troubles. They could potentially drive the cost of O2 sensor replacement up and make it a very expensive repair job in the end.

Is the O2 Sensor Replacement Cost Worth It?

If you ever find yourself with a bad O2 sensor in your car, it’s going to be up to you to decide whether or not O2 sensor replacement cost is worth it. If you’ve got a newer car that you’re going to plan to drive for at least a couple more years, then replacing your bad O2 sensor will be a no-brainer. You’re not going to be able to maintain good gas mileage and pass emissions tests without it. You’ll have to plan to shell out money to have your O2 sensor replaced.

But if you don’t think you’re going to be keeping your car much longer, then paying upwards of $400 for O2 sensor replacement isn’t going to be the best idea. You should think about getting rid of your car in this case and upgrading to something that doesn’t have exhaust system problems. It’ll be a much better option than starting to pay hundreds of dollars to fix issues like bad O2 sensors.

Can You Sell a Car With a Bad O2 Sensor in It?

If you decide that replacing a bad O2 sensor isn’t in the cards for you, you should know that you’ll still have the option to sell your vehicle. You might not get much from private buyers because of your car’s condition. But junk car buyers will pay top dollar for your car, in spite of the bad O2 sensor in it.

Want to see what your car could be worth, bad O2 sensor and all? Cash Cars Buyer can make you an offer today and tell you how much cash you can collect for your old car. You might be surprised to see what it’s worth even in its current condition. Contact us now to start the process of selling your old car to junk car buyers.