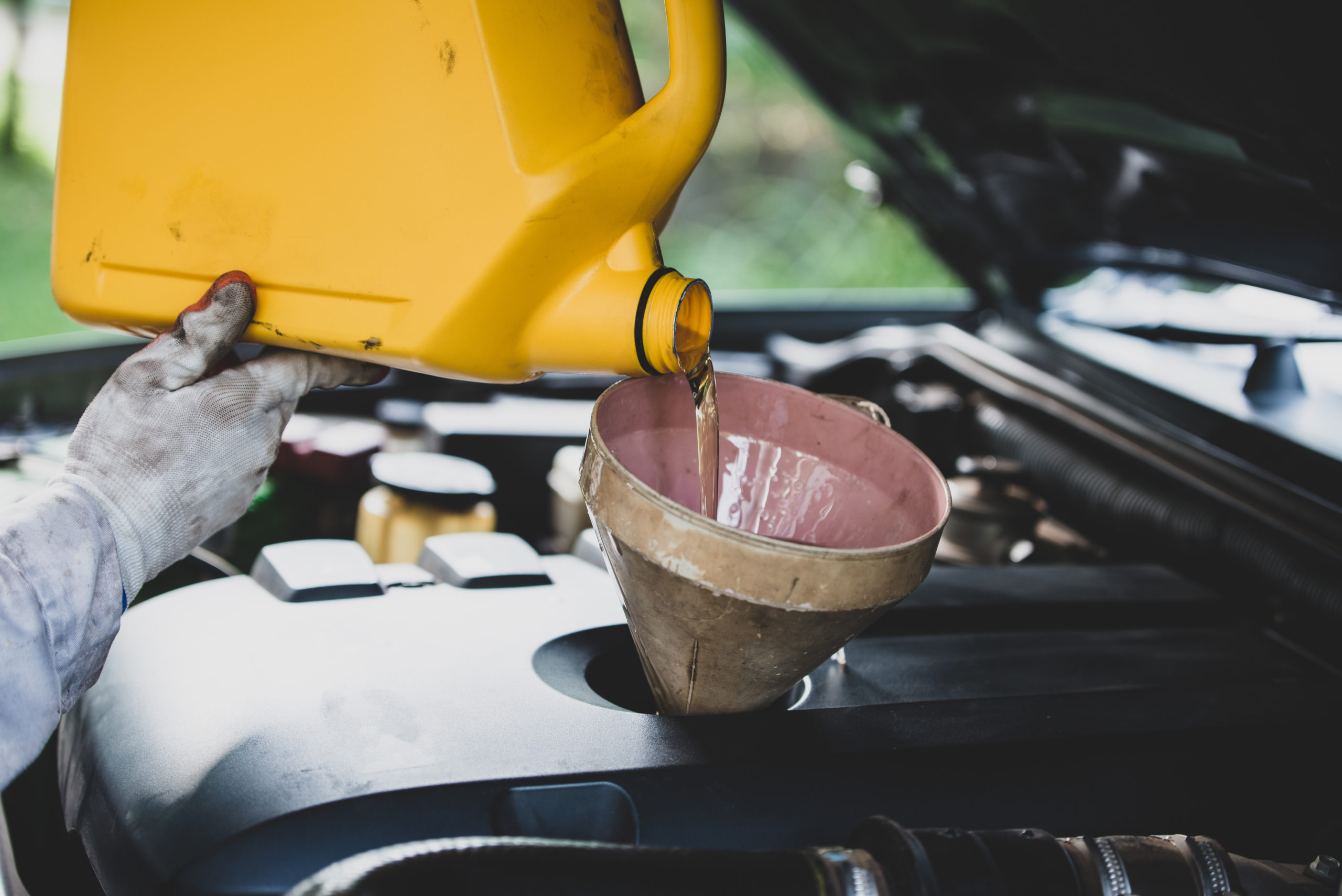 Antifreeze in oil means there is an internal leak. It could be a sign of a blown gasket or it could also be a sign or a cause for an engine to fail.  When antifreeze is mixed with oil, it depletes the oil's lubricating characteristics and can cause engine failure. Antifreeze thickens the oil, making it more difficult to flow through the oil galleries and lubricate the engine. Antifreeze in oil also affects the engine by creating an acidic environment within the oil. Organic acids will develop, putting bearings and other frictional surfaces in jeopardy.

The corrosion will pit the clad surfaces of the bearings' lead/tin covering. As a result, cupric metals such as bronze and brass will rust and discolor. Over time, even a tiny coolant leak can severely damage steel of the engine and copper surfaces. So if you see antifreeze in the oil on the dipstick, there's a problem that needs to be addressed.

How can you tell if there is antifreeze in your oil?

Finding out if there’s an antifreeze in oil can be done easily and cheaply by doing dipstick analysis. Coolant (water and antifreeze) has seeped into your engine if you detect brown bubbles or a dried crusty-brown deposit above the oil level line on the dipstick. It's possible that the oil on the dipstick resembles chocolate milk. Never use motor oil as an antifreeze test.

White exhaust smoke with a pleasant odor is another telltale sign of a coolant leak. The dipstick oil level may even rise in this instance, suggesting that a large amount of coolant has spilled into the crankcase.

To check a coolant leak, turn off the engine, wait an hour or two, then unthread the drain plug and capture the liquid in a clear glass or plastic bottle. Water and antifreeze are both heavier than oil, therefore they will pool at the bottom of the oil pan. Retighten the drain after collecting a couple of ounces of liquids.

Check for glycol and water in the fluid. Depending on how long the coolant has been in the crankcase, the mixture of glycol and water can resemble a thick mayonnaise-like paste. A delicious antifreeze odor may also be detected.

Coolant smells almost sickeningly sweet, whereas oil smells earthy and musky. Pull the engine oil dipstick and take a smell if coolant loss is noticeable but no leaks are visible. If even the tiniest whiff of sugar reaches the olfactory sense, the cooling system is most likely mixing fluid with engine oil. If antifreeze in oil is detected in your engine, it should be serviced right away.

If you have oil in your coolant or coolant in your oil, it usually signifies one or more of your engine's gaskets or seals have failed. Your engine is set up such that one system controls engine oil to keep your car lubricated and another controls coolant to keep it from overheating. The cylinder head gasket (sometimes known as a “head gasket”) is the component of your engine that keeps coolant and oil from seeping into one another. You can expect your oil and coolant to mix if your head gasket is broken or damaged.

How do you fix coolant in the oil?

When it comes to your car, one of the issues you want to prevent is having coolant or antifreeze in oil. It's bad for your car's health if your coolant and oil are combined. In simple terms, the engine oil in your automobile is designed to lubricate the internal components of your car so that they don't grind against each other due to heat and friction.

Your coolant also serves another purpose: it prevents your car from overheating. If you try to drive around with coolant leaking into oil or oil in the coolant reservoir, the results should be obvious but in case they aren't, the answer is that you may expect overheating and/or severe engine damage.

So how do you fix coolant in the oil? You will notice a thick, milky or gravy-like substance in the reservoir if there is oil combined with coolant. This is a tell-tale sign that you have this problem. The reservoir should be properly cleaned, and the radiator should be flushed with water. Similarly, check your oil dipstick to determine if an oil-coolant mixture is present in your oil tank. If that's the case, you'll need to change your oil as well.

Use high-quality oil and coolant that seals piston rings and valve guides, preventing or reducing leaking problems. Oil and coolant changes provide more protection, improve fuel economy and performance, and extend the life of your oil. If you're adding antifreeze to your system, be sure it matches what's currently there. You don't want to mix them, even though you can safely flush the system and use the old standby green antifreeze. Finally, for engine corrosion protection, a 50/50 ratio of whatever you use is essential.

If your engine is damaged in an accident, proper car maintenance will provide little protection. However, employing high-quality chemicals and additives in your engine can help prevent issues such as oil and coolant mixing.

While the life of these remedies varies depending on the severity of the leak, the most important thing is to get it fixed as soon as possible. If you have a burst head gasket, a broken cylinder head, or a damaged engine block, and the leak is significant, you should have a professional technician examine it over.

Engine overheating is a common cause of head gasket failure. Because of a coolant leak, a faulty thermostat, or a malfunctioning electric cooling fan. Thermal expansion can crush and damage sections of the head gasket when the engine overheats. It's possible that the damaged area will begin to leak combustion pressure and coolant.

But hopefully, the problem will be minor, and a simple stop leak/chemical solution will be sufficient. If, however, your car overheats quickly after your repair, turn it off and bring it in right away for repairs. If you keep driving the vehicle as it is, your engine may already be severely damaged, and if it isn't, it will be soon.

How much will it cost to fix antifreeze in my oil?

The initial remedy will only cost the cost of replacement fluids and leak stoppers, which is actually fairly reasonable. However, the cost of repairing whichever gasket or component is causing the leak in the long run could be significantly higher. The worst-case scenario, which you hopefully won't have to confront, is that your engine block has a crack. If this is the case, the only option is to replace the engine, which normally costs between $4,000 and $8,000. This is, once again, the worst-case situation.

It should not cost you more than $400 or $500 to replace the radiator and repair the transmission. However, if your head gasket is entirely ruined and needs to be replaced, the total cost, including parts and labor, may be several thousand dollars.

Can you drive a car with oil in the coolant?

We already know what can happen with antifreeze in oil so how about oil in the coolant? Antifreeze and coolant should never be mixed, thus driving a car with oil in the coolant is not recommended, since it could create major engine difficulties. This may cause damage to your engine, necessitating the purchase of pricey engine components or the replacement of the complete engine.

What happens if you combine coolant with oil? As mentioned if coolant and oil mix, the engine will not be able to adequately cool or lubricate itself. This might cause overheating and wear on the engine. Keep an eye on your thermometer and avoid driving if it rises too hot.

A blown head gasket is usually indicated by oil getting into the radiator. Oil is leaking into the water jacket and making its way into the radiator via the cooling system. Unfortunately, repairing a hard part may be your only option. Oil will not enter the cooling system as a result of the water pumps. The coolant will mix with the oil as a result of this. When the engine's head gasket blows, oil might mingle with the coolant in a third method. The engine, on the other hand, may overheat and lose power if the head gasket is blown.

What causes the oil in the radiator to mix with the water? A defective oil cooler could be one of the causes. Most current cars are equipped with an oil cooler. Overuse or aging might cause the oil cooler to break. Oil will begin to flow into the coolant when a fracture appears. When an engine overheats, the head gasket ruptures, allowing oil to flow into the cooling system.

The engine cannot be adequately cooled if the coolant level becomes too low, too unclean, or too polluted. Today's vehicles' engines are unable to handle excessive heat. If the engine overheats, it can cause serious damage and be very expensive to fix.

How do I know if my headgasket is blown?

The head gasket is one of the most important gaskets in your engine because it seals the cylinders' firing pressure and prevents coolant and engine oil from escaping into the cylinders and out to the outside. While sealing in cylinder pressure, coolant, and engine oil flowing via casting ports, the head gasket must withstand the pressures of the two surfaces expanding, contracting, warping, and rubbing.

The engine in your car works in extremely hot circumstances. If the temperature rises above usual, your engine may overheat, resulting in a blown head gasket. The excess heat causes the cylinder head and engine block to expand too much, causing the head gasket to fail. Detonation damages the armors or fire rings, allowing cylinder pressure to flow past the armors, resulting in head gasket failure.

A ruptured cylinder head gasket will allow coolant to enter the cylinders because it seals coolant passageways. White smoke from the exhaust, bubbling in the radiator and coolant reservoir, inexplicable coolant loss without leaks, milky white coloration in the oil, and engine overheating are all symptoms of coolant in the cylinders.

You can either have a mechanic assist you in removing the head gasket and replacing it as well as any other internal damages, or you can try putting a steel sealant in the radiator and letting it do the job for you.

If you don't have enough money to remove and replace the head gasket, you might choose the second alternative because, depending on your vehicle model, repairing a head gasket leak can be quite costly. The second choice, on the other hand, would only be a band-aid.