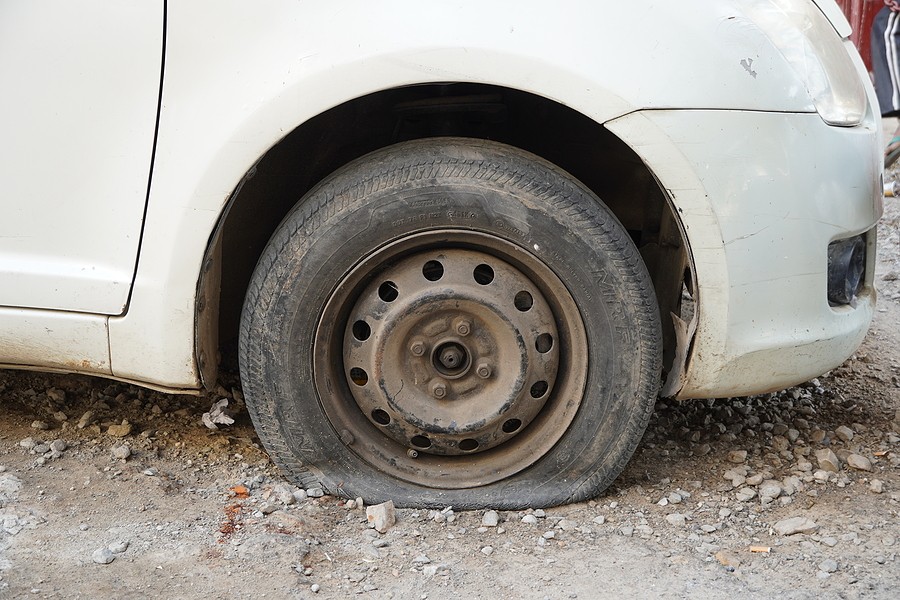 Airless car tires have been long introduced by Michelin in 2005. The Tweel (derived from tire and wheel) airless radial tire concept is a combination of tire and wheel that can replace the current tire, wheel, and valve assembly. It was a true revolutionary discovery set to do away with problems with flat tires, increasing CO2 emissions, and other problems with conventional tires.

Airless tires were invented by Dr. Tim Rhyne, a senior research fellow with Michelin Americas Research and Development Corporation, who was duly recognized for his contribution to this revolutionary tire development.

It was in the late 1990s, over lunch with his fellow Michelin engineer and co-inventor of the airless radial tire, Steve Cron, that they came up with the idea of a challenging pneumatic tire technology.

They started to explore new and revolutionary concepts for this essential component of the mobility of a radial tire that wouldn't require any air. Dr Rhyne described it as a eureka moment. The Michelin airless car tires consist of a rigid hub that is connected to a shear band by a flexible and deformable polyurethane spokes and a tread band. They all function as a single unit. The Michelin X-TWEEL SSL was then commercially launched for skid steers in the year 2012, of October.

Michelin “Tweel” has shock-absorbing, load carrying as well as handling capacities that compare favorably to the conventional pneumatic tires but they claim that the tire will have a lot of vibration when driven over 80 km/h (50 mph). So the airless car tires are only for ATV’s, golf carts, and skid steer vehicles. Michelin and GM, however, announced they’re aiming to make a new airless tire for passenger vehicles available in 2024.

In 1938, J. V. Martin of New York invented a safety tire with hoops of hickory encased in rubber and fitted with criss-cross spokes of ribbed rubber with an ability to drive over 100 mm (4 inches) blocks when tested in a springless test car. It was said to have undergone successful testing but it never saw any success. But still, it is a clear predecessor to the Tweel. Their execution is nearly made the same fashion, but with different materials technology.

When you speak of first, the very first use of the non-pneumatic tire was actually in the 1970s for NASA sported by the Apollo Lunar Roving Vehicle. The wheels were made with a spun aluminum hub and revolutionary airless tires consisted of woven steel strands that are coated with zinc.

But the traction needed on the moon was obviously greater given the atmosphere and terrain, so the contact area was partly coated with titanium chevrons. This kind of technology, obviously, is unnecessary and too expensive (more expensive than the whole vehicle) for earthbound applications.

Crocodile Tyres, a Queensland Australia-based company, focuses on the development and commercialization of airless Off The Road (OTR) tire technologies designed especially for heavy-duty industrial, agricultural, construction, and Mining Machinery.

Big Tyre, also of Australia, is also developing non-pneumatic and non-solid wheels aiming to be puncture-proof (airless) and are safe wheels suitable for tough environments like that in the military and in mining.  Resilient Technologies with the University of Wisconsin–Madison's Polymer Engineering Center are also creating around polymeric honeycomb-wrapped non-pneumatic tire with a thick, black tread. Their airless tires have been tested and are used by the U.S. Army.

Bridgestone also announced that they will develop an “airless” or non-pneumatic tire for the passenger vehicle market and it sparked the interest of many drivers. Bridgestone’s airless tire technology offers a unique spoke structure made to support the weight of a vehicle, as it effectively eliminates the need to periodically air refill the tires.

Bridgestone revealed its second-generation air-free concept non-pneumatic tire in 2013. It features improved driving performance, load-bearing capabilities, and environmental design. There are, however, developments and enhancements that need to be made before the airless tires can be made available for consumers.

They still need to find a way to avoid debris being trapped within the spokes, as well as develop the best way to evenly distribute weight and consistently transmit loads.

A drawback to airless car tires is cost. A Tweel runs from $239 for a zero turn mower up to $750 for a UTV. At $750 per tweel the tires certainly won’t be cheap. And unless you think this is a sign of things to come for your real vehicle, these airless car wheels are only rated at 38 mph, and Michelin has no plans for a full-size model yet.

Are airless tires a good idea?

In theory, an airless tire is not only a good idea but a great one. Airless car tires equate to no flat tires, no need for spare tires, savings for heavy vehicle industries, reduced CO2 emissions, and use of sustainable materials.

With airless car tires, you don’t have to worry about leaking tires because there will be no air to leak. When you happen to run over a sharp object in the road, you won’t have to worry about puncturing your tires and getting it flat because solid tires without the need of air simply can’t go flat. You will never have to change a tire especially on the highway, which is always a nuisance.

The airless car tires are also called the “Uptis” which means Unique Puncture-proof Tire System, which Michelin is testing on Chevrolet Bolt EVs. As an airless tire, the Uptis won’t require regular maintenance and these types of tires, as Michelin claimed, won’t ever need to be rotated.

Again, since you will not need to change or repair a flat tire, you also do not need to carry a spare tire. That also means more savings plus you could free up your trunk space. No spare tire to be carried with you everywhere also means you are carrying less weight on your vehicle and that means better fuel economy as well.

Around 12 percent of tires are reported to go to waste annually due to blowout issues, as Michelin reported. Another 8 percent are also lost due to inflation issues that produce irregular wear. The airless car tires eliminate the need for a spare tire and they weigh about the same as a regular tire.

The airless car tires industry is working on designs that will enhance performance and eventually cut back CO2 emissions. The design enhancements also aim for low-rolling-resistance tires that will reduce fuel expenditure and emissions. Even just a 10 percent improvement in rolling efficiency can already reduce consumer fuel expenditures by 1 to 2 percent. The reduction in emissions with that improvement is already equivalent to taking 2 million to 4 million cars off the road per year, as reported by the Transportation Research Board, part of the National Academies’ Division on Engineering and Physical Sciences.

In the US alone 250 million tires go to waste each year, and these tires do not break down in landfills. The airless car tires industry is now working on innovations to address these eco devastating problems, while also advancing a circular economy.

This will be done by creating a sustainable natural rubber to do away with deforestation by developing technologies that have opened beneficial uses for wasted tires. The wasted tires will be used for infrastructure and in making new tires. The materials to be used in the tire are recyclable, so it will also contribute to the efficient use of resources.

In addition, there will be no part of a non-pneumatic tire that will go to waste. Bridgestone aims to create a “cradle-to-cradle” system in which all the tires are first recycled and then they will be factory-refashioned into new tires. Airless car tires will be among the first that will be processed this way. The airless car tires, which are a hundred percent sustainable, sit on an aluminum wheel.

Airless car tires also will be able to offer specific advantages for trucks in farming, mining, and construction application as tire failure can cause productivity and efficiency loss. Tires that never leak or puncture should be a very welcome advancement.

Despite this list of advantages the airless car tires industry still has a lot to improve on to translate these advantages into reality. Bridgestone as mentioned earlier is still having issues with debris getting caught in the spokes. As mud, sand, and snow can clog up the spokes it can knock off the balance of the tire, and that is if the spoke has managed not to get damaged. Airless tires can also get hotter than conventional tires posing a danger as it leads to blowouts.

Early reports also noted noise and vibration issues in Michelin-developed Tweels at high speeds. That is evident in its present limited use on skid steers, golf carts, and riding lawnmowers.

Are airless tires available for cars?

As mentioned, the wheels Michelin is selling are only rated to 38 mph, and they are not yet selling for a full-size model. The Tweel is available for various four-bolt central steel hubs fitted for UTVs from several manufacturers like Kawasaki, Polaris, Honda, Kubota, John Deere, etc.

Bridgestone has also introduced their own airless tire designs but are only aiming to supply it to smaller forms of transportation like bicycles. So, it will still be a while before airless car tires are available.

However, an airless passenger-car tire, known as Uptis (for Unique Puncture-Proof Tire System), that was made by Michelin has already been exhibited at the 3rd China International Import Expo in Shanghai. They are projected to be on sale as soon as 2024 after its road test.

How long do airless tires last?

The airless car tires or any airless tires are expected to last longer than conventional tires. They also need low maintenance and not only because of their puncture-proof technology, but also because of its resistance from wear and tear caused by under or overinflation. Since there's no air involved with the tires they are always at the correct pressure.

These more sustainable car tires than the traditional tires will significantly reduce the number of tires that will need to be scrapped before the end of their estimated life cycles. And since it will reduce the number of raw materials, energy, and emissions linked to tire production the benefits of the long-lasting tires are more felt.

Why don't we use airless tires?

Since tires with something in them will obviously weigh more than empty tires with only air. They will also no doubt provide less suspension as it is the air in tires that absorb impact in traditional tires, the absence of it will surely take away that suspension. Bad suspension leads to a rougher ride if not accidents.

Airless car tires will also trap heat as anything that rubs against the pavement while going at a high speed will get hot. It is the air in the tire that allows the heat to dissipate to keep your tire running safe but without air, your tire will go burning hot. There’s just no way for the heat to disperse leading to blowouts and accidents.