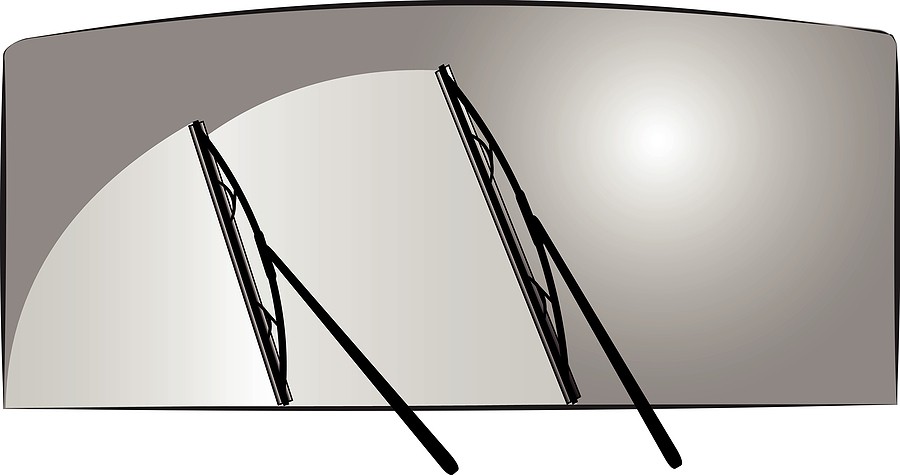 If you're unable to turn off your windshield wipers it's definitely going to be a frustration to try to drive this way. Let's take a look at what could be going on in your vehicle that would prevent you from turning your wipers off, and what you can do to get them working properly again.

How Come My Windshield Wipers Won't Turn Off?

Although it seems like it might not be a big deal that your windshield wipers won't turn off when you don't need them, it can lead to some damage to your wiper system to let them keep operating when you don't need them. When there's no water to keep the blades lubricated, you're creating extra fiction. That in turn is going to wear down both the wipers themselves and the motor that keeps them operating.

Your windshield wipers are an electrical component of your vehicle. That means they are wired to a power source; in this case your alternator and your battery which keeps them running. There will be a fuse in the system that regulates the power, a linkage assembly and a small motor that the arms are connected to that allow them to move back and forth across the windshield.

Bad Wiring:  If you have a short in your wiring somewhere that after you turn your wipers on it's possible that the wipers will no longer be properly connected to receive the signal that you're trying to turn them off.

Bad Relay: The internal electric switch mechanism inside of your windshield wiper assembly is called a relay. This is basically just a little box that's plugged in under the hood of your car along with all the other electrical relays that operate the various electrical components. When the relay isn't working properly it's either going to shut your wipers down completely or disable them such that once you turn them on you're not going to be able to turn them off again. On the bright side a bad relay can be replaced for probably around $15 to $20.

Broken Controls: Your windshield wipers are usually controlled by the stalk on the side of your steering wheel. You press the stalk up to turn the wipers on and you likely have a couple of speeds available. if the switch itself were to break inside of the stalk then your wipers will not be getting the signal that you're trying to turn them off again.

Bad Park Switch: The motor that controls your windshield wipers has something inside of it called a park switch. This is what governs the flow of electricity and controls whether your wipers are powered on or off. When it fails then the current is no longer governed by anything so the wipers will act as though you constantly have them turned on. In fact, you can even stop your vehicle and turn it off and the wipers will continue to run because they're going to draw power from your battery.

When the park switch in your wiper motor fails you may need to replace the entire motor itself to get it working again.

How Do I Fix Windshield Wipers That Won't Turn Off?

Figuring out how to fix wipers that won't turn off of course depends on figuring out why they won't turn off in the first place.  Fortunately, as we've seen there are usually just a handful of reasons why your wipers won't turn off, so you only have a few potential things to look at in terms of getting the problem fixed.

If the problem you need to have fixed is a windshield wiper switch replacement then you're probably looking at a repair job that’s going to cost you anywhere from $200 to about $250.

If you have a problem with the wiring in your windshield wipers and need to replace the linkage you could end up paying anywhere between about $100 and $250 to get this repaired.

Finally, if the problem is related to the motor itself then you can buy a windshield wiper replacement motor for as cheap as $25 for an aftermarket replacement to as much as about $400.

Can You Turn Off Rain Sensing Wipers?

Some vehicles have rain sensing wipers or the option to turn on a rain sensing feature that will cause your wipers to operate when it's raining without you having to manually activate them. However, this technology doesn't always work the way you want it to. In some vehicles these wipers will not turn on even when it is raining, and at others they may be activated when it's not raining at all. Both can be inconvenient, and it could be potentially dangerous to have to deal with wipers that aren't working when you need them to.

Fortunately, for the most part if your vehicle is still in good working order then pushing down on the stalk to the off position should completely turn off rain sensing wipers. When you need them all again you can simply just push the stalk up into the on position the way you would with any kind of normal wipers.

If attempting to turn the rain sensing wipers off doesn't work this way, then you may have a short somewhere in the wiring.  It would be very unusual for your wipers to continue working even though you have pushed the stalk control down to the off position unless, as we already covered, the park switch had failed.

Why Won't My Windshield Wipers Work?

Bad Blades:  If this is the nature of your problem then it's likely your wipers will turn on and off without any issues, but they still won't be able to get the job done properly. The edge of your wiper blade is typically very soft. The rubber edges work like squeegees to push the water away from your field of view. If the edge of the blade becomes torn overtime it's not going to make it direct contact with the glass of your windshield any longer. The bigger the tears or gaps, the bigger the problem you're going to have when you try to wipe your windshield off and discover that the blade simply can't do the job.

Even worse, if you have a hole in the blade of your windshield wiper it could pick up some debris that will actually scratch your windshield and make the situation even worse.

Bad Motor: While a faulty park switch can cause your blades to continue working even when you turn them off, the motor itself can fail in a way that prevents the blades from turning on. Just like any small electrical motor its subject to wearing out over time or shorting out for any number of reasons. As we listed earlier, getting a replacement windshield wiper motor may not be very expensive, however.

Frozen Blades: If you live in the Northern climate you've definitely experienced this problem before. In the winter, your windshield wipers can freeze to the hood of your car as snow and ice build-up around them. After a heavy snowfall or some freezing rain when you're scraping the ice and snow off of your windshield you need to remember to clean the blades as well and then lift them and give them a good tap to make sure they're free and clear from any ice that may be holding them down. If you try to turn on your wipers when they're frozen in place you can cause damage to the motor or the linkage assembly.

Bad Pivot: The arms that your windshield wiper blades are attached to connect to the windshield wiper assembly by way of something called a pivot nut. The nut tightens on to a pivot stub and that holds the wiper arm on to the pivot securely. These nuts can come loose over time and your wiper motor will start turning the pivot itself, but the arm won't move because they're not securely connected to one another anymore. It's possible that when you try to turn your wipers on, you'll see some twitching in the wiper arm itself but little else. If that's the case, it probably is this pivot nut you're having an issue with. You'll need to tighten them in place again to make sure everything is working. It's also possible that one wiper will work and the other one won't when this is the case.

Bad Fuse: We mentioned earlier that there is a fuse that's going to be associated with your windshield wipers. If this fuse burns out, then your wipers will not be able to receive the power they need to operate properly. Replacing a fuse should not cost you very much money, you may be able to get a new fuse for under $5. Just remember that the fuse probably burned out as part of its job protecting the motor itself from shorting out for some reason. Give the motor a good inspection to see if there's some kind of short or other problem associated with it before putting that new fuse in so you can prevent the problem from happening a second time.

Windshield wipers are pretty cheap, you can pick them up for just a few dollars at your local Walmart or any other store that sells auto supplies and even gas stations. For that reason we don't tend to give them a lot of respect because they're so easy to find, and most of us can replace them on our own without having to go to a mechanic to get assistance putting them in place.

Despite how cheap and easy to use windshield wipers are we can't forget how important they are to ensuring a safe drive during bad weather conditions. Driving without reliable windshield wipers in bad weather is just as dangerous is trying to drive without brakes. Your visibility will suffer greatly when your wipers are not working properly and the potential for having an accident is extremely high.

For these reasons if you're noticing that there's a problem with your windshield wipers, even something that seems like it wouldn't be a big deal such as your wipers not turning off properly when you want them to, you need to get this problem checked out by a mechanic as soon as you can. Remember it's not just your own safety that you need to worry about on the road it's the safety of everyone else as well and you can't be putting yourself and others at risk for the sake of such a small, easy to fix problem as an issue with your wiper blades not responding the way you want them to.