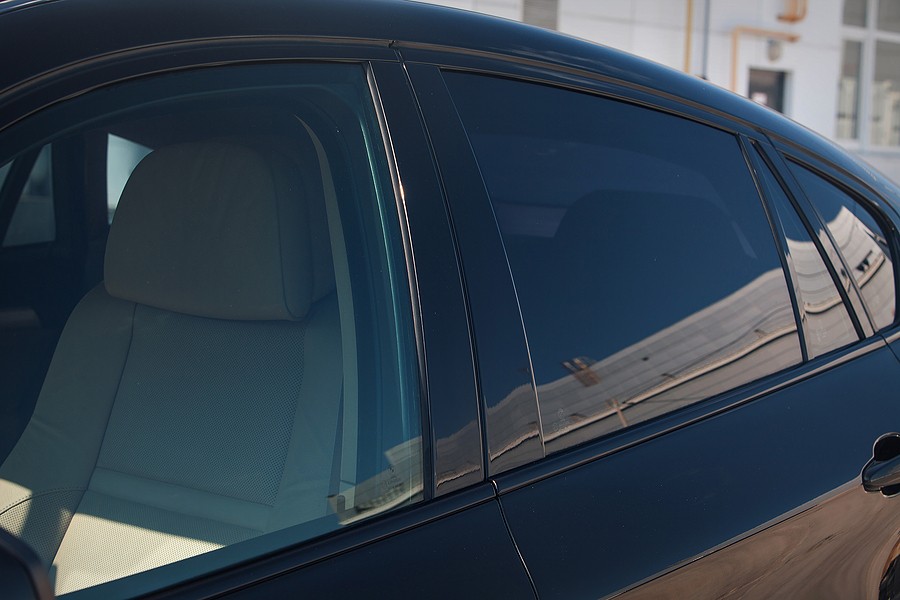 Window tinting has become a needed upgrade for vehicles not only in the United States but also all over the world.  Window tint is a special polyester material that is used to treat modern car windows. It is intended not only to protect passengers from UV (UltraViolet) rays of the sun, but also to protect the interior of the vehicle. Others also have their windows tinted for privacy and aesthetic reasons. However, because the level of tint darkness and color can affect safety and security, there are window tint laws that must be followed. In California, for example, you can only use green, gray, or neutral smoke tint. Your tint must also have a luminous transmittance of at least 70% and not increase reflectivity for either the front and back windows.

For safety and security reasons, most states prohibit window tinting. Tinting reduces the amount of light that enters the car but can make it difficult to see the road. Accidents on the road are more likely when one has poor vision. Another reason tinting may be illegal is for public safety, particularly for police and other federal agencies.

They obstruct the view from the outside, making it difficult for authorities to identify violators of the law prohibiting the use of communication devices and other gadgets while the vehicle is in motion, as well as the law requiring the use of seatbelts. Heavy tinting also makes identifying criminals, suspects, and victims more difficult, most especially for a moving car.

Extremely dark tinting can impede investigations and be dangerous during traffic stops and other incidents. Heavy tints also make the job of cops and rescuers much more difficult.

Window tinting laws vary by state, but all specify a maximum percentage for tinting.

Before we dig further into window law tints, let’s look into the basics surrounding tints and restrictions on tinting for vehicles or window tinting laws.

Though state laws differ, the focus of the regulations is on the level of visibility that the glass provides for the driver to see through it and drive safely. Lawmakers want to ensure that drivers' lines of sight or vision are not restricted while driving. They also consider the amount of light that can pass through the glass.

States, for example, base their laws on the amount of visible light transmission considered fit for safety. If your state requires a 70 percent VLT rating, your car tints should allow for at least that much visibility.

Before getting mirrored car tints, it's critical to understand why these state laws exist for car window tints and to be aware of the guidelines. Otherwise, you may find yourself having to undo the work and being out of pocket for the cost of installation – as well as potentially additional fines. The amount of tint that drivers can legally apply to their vehicles varies by state. So if you frequently drive between states with different laws on this subject, the laws can become complicated.

Tinting the windows of your car means you are covering them with film or tint on the surface of your car window. These window tints come in various types you can choose from, each with their own materials with benefits that fit your needs.

Factory Tint  – The factory tint is applied through the dye and retains relatively high levels of visible light transmission (VLT). This means that 74-85 percent of the sun will still shine through your windows, and the dye will only help to reduce about 15 percent of it.

Film Tint – This can have a visible light transmission of up to 90% and can go as low as 2.5%. This does not have the traditional look of tint and is more hidden. It can help shield you and the other people in your car while also keeping the interior of your car looking newer for a longer period of time. A licensed mechanic must install the tinted film.

Original Equipment Manufacturer Tinted Glass (OEM) – Typically, what someone considers when purchasing a car. The glass is installed during the manufacturing process, and the level of VLT is determined by state regulations. This can be more expensive because insurance companies may refuse to pay unless the car is less than one or two model years old.

Visible Light Transmission (VLT) – the measure that determines the amount of light that can pass through the car window or tint. The lower the VLT, the darker the tint and the more difficult it is for light to pass through. A VLT of 70%, for example, indicates that 70% of light passes through a window. It's not completely dark, but it's darker than clear glass, such as a factory window. A VLT of 30%, on the other hand, means that it blocks up to 70% of the light. Tinting materials with a VLT of 30% are significantly darker than those with only 70%.

Front-side window tint level – the amount of tint that can be applied to your driver's and front passenger's windows. If you drive a vehicle with heavily tinted windows in the front, you run the risk of being prosecuted by the police. The front windscreen and the two windows on either side of the driver must have the proper amount of tint.

Rear-side window tint level – the maximum level permitted on back windows. This is determined by the type of vehicle, whether it is smaller or larger and can accommodate more passengers.

Rear window tint level – the tint level permitted on your vehicle's rear window. Depending on the state, this may be more restrictive than the other windows in the backseat of the car.

Windshield – No state allows the tinting of a car's windshield. You can place a sticker on the top of your windshield, near the sun shield.

Color – there are some states with color tint restrictions.

Reflectiveness –  some states like Illinois regulate how reflective your window tints can be. The front and back side windows should be non-reflective. This is put into consideration as certain window tinting films have reflective metallic bits.

Front and back side windows must always be non-reflective. The laws aren't specific about what this means, but keep in mind that certain window tinting films can include reflective metallic bits.

AS-1 Line –  is visible on the windshield and runs parallel to the roof. It is the clearest type of glass and has no tint.

There are states with less restrictive window tint laws, and others with more strict requirements that can include the color of the tint or go into greater detail. We'll also go over the easiest, middle-ground, and most stringent state tint regulations. Because of the laxity of the states' car tint laws, they have low VLT percentages, usually around 30%. This category includes the vast majority of the 50 states.

The stricter states have incredibly strict tint laws. These necessitate 70 percent VLT on either the front or back side windows, or both. California, Delaware, Rhode Island, New York, Michigan, Vermont, New Hampshire, Washington, DC, and New Jersey are among these states. The most stringent car tint regulations are found in Illinois and Texas.

The VLT requirements in the middle-ground states range between 30 and 70 percent. Alabama, Hawaii, Kansas, Virginia, Wisconsin, Alaska, Iowa, North Dakota, Louisiana, Utah, Pennsylvania, Ohio, and Minnesota are among these states.

You can see a spreadsheet that breaks down each state's tint requirements for the front, rear, and windshield.

There are medical exceptions when it comes to window tint laws, such as if you are more light-sensitive than the average, and most laws have taken this into consideration. You may require a doctor's note, but you should be able to obtain the types of window tint that you require for your condition.

The condition of people with albinism, who must always be protected from the sun, is a perfect example of light sensitivity. People may be affected by other diseases, such as psoriasis. While sunlight can help some people with psoriasis, some people react negatively to UV radiation.

Rosacea patients may also be eligible for a medical exemption. Rosacea can cause increased sensitivity (especially to the sun) and facial inflammation. If you have any of these conditions, ask your doctor for a medical letter. It should be kept in the car for law enforcement and police.

Lupus patients are exempt from Florida's window tinting laws. Medical exemptions are also available for dermatomyositis and vitiligo (facial or total). The same is true for people suffering from DeSanctis-Cacchione syndrome (Xeroderma Pigmentosum). Exemptions are also available for any other autoimmune disease that necessitates limited light exposure. Scleroderma is one of these, affecting an estimated 300,000 people in the United States. Because this autoimmune disorder can cause photosensitivity, it is essential to limit your exposure to light.

The regulations regarding window tint laws on your vehicle, like all laws, are in place for your safety and the safety of those around you. Before applying window tint, always check your state's laws. If you are looking for window film tint for your car, make sure you work with a company that understands these window tinting rules or tint percentages and how they affect the window tint on your vehicle.

What is the darkest legal tint?

The darkest tint usable is 5%, and you cannot see through 5% tinted car windows at all. A 5% tint is illegal in the majority of states. It's most commonly seen on the back windows of luxury cars and limousines.

If you don't want complete darkness, a 50 percent tint is a great option. It only blocks half of the light that enters your vehicle, but it still keeps UV rays and heat out. Furthermore, it will reduce eye strain and glare, making for safer driving.

But if you insist on getting darker, a tint of 35% will give you more darkness, but it will still be easy to see through. This tint is popular among drivers because of its stylish and sleek appearance. If you want to tint for privacy, a 20 percent tint is an excellent choice. If you get close enough, you can see through windows with a 20% tint, but it's still difficult. However, it is usually enough to deter snoopers. When a vehicle comes with a factory tint, it is usually between 15% and 20%.

A car with a 30% tint will appear darker but will still allow you to see through it, making it one of the most popular tint shades. It is considered a medium shade because it falls between 5%, which is the darkest, and 50%, which is a very light tint and is considered clear by most.

One of the most popular tint shades is 30%, and you can definitely see through it at night. In many states, 30 percent is legal, and it would not be legal if you couldn't see through it at night. However, because everyone is different, some drivers find it difficult to see through compared to clear glass. If it's legal in your state, 30 percent tint is a great option for side or back windows. However, putting 30% on your front windshield is never recommended and is illegal in most, if not all, states.

You're now ready to take your vehicle to a window tinting shop, have the cost estimated and have your windows tinted to the extent permitted by law in your state now that you've learned the ins and outs of car tinting.