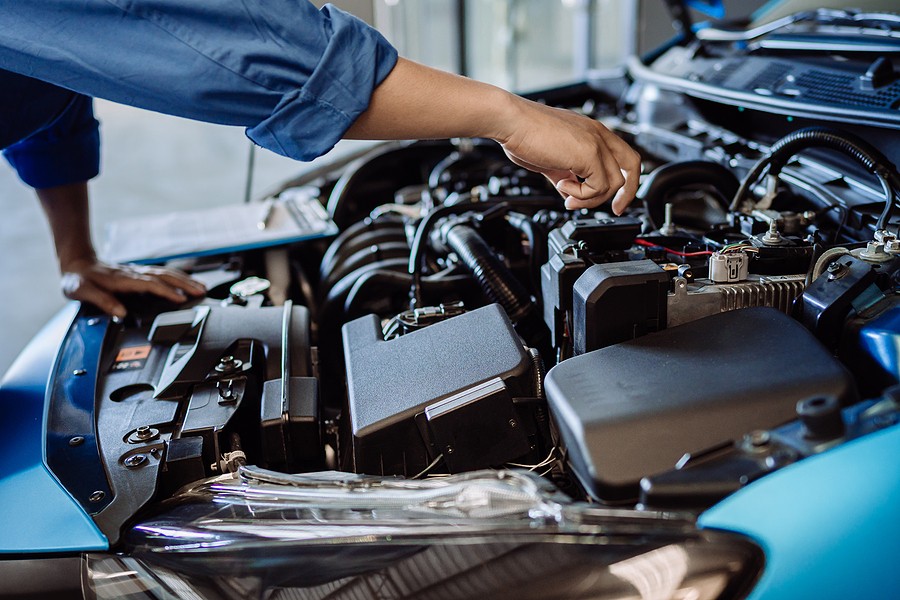 Worn out or damaged spark plugs, burned or leaking exhaust valves, and other components that are damaged can let unburnt fuel into the exhaust system, where it burns within the catalytic converter and melts the internal portions of hte converter itself. In addition, a poor ignition system can also lead to the same issue. This problem can cause the bad catalytic converter to ruin your engine.

Furthermore, catalytic converter problems can lead to something more serious, or be the aftermath of a more serious issue, like worn piston rings or a broken timing chain. These problems within the engine system of your car can lead to air or fuel getting into the wrong parts of your car, with a head gasket leak causing oil in coolant, turning on the check engine light.

How to diagnose a failed catalytic converter

To prevent your bad catalytic converter from ruining your engine, you should take note of a few signs and symptoms that can clue you in to the problems occurring in your vehicle.e if you smell the strong “rotten eggs” smell coming from your vehicle, this is the easiest way to diagnose the car. Fuel contains a small amount of sulfur, which is usually burned so that it is odorless. However, if the catalytic converter has undergone intense internal damage, the replacement will mean the mechanism is not working properly and the odor can be smelled by the driver and passengers.

In some cases, you can also hear the rattle from the catalytic converter. If you hear this, the element inside of the converter has become loose and disengaged, and can move around during use. If you remove the entire unit, try hitting it with a hard tool to see if you can hear the clatter from inside of hte converter.

To cross check and ensure that you do not have a bad oxygen sensor when you do not see the check engine light, use a vacuum gauge and connect the gauge to the intake manifold vacuum line. Then, start the engine and let it idle, while you temporarily check the reading on the gauge.

What is a catalytic converter?

A catalytic converter in your vehicle is an exhaust emission control mechanism that is in charge of reducing the toxic gases and pollutants that are produced in the exhaust gas from the internal combustion engine in most modern cars. Catalytic converters are usually used in tandem with the internal combustion engines that are given power by either gasoline or diesel, depending on the specific make, model, and year of the car.

The catalytic converter has to convert three harmful compounds in the car exhaust into compounds that will not destroy your car or the environment. These harmful compounds include hydrocarbons, which are released with the unburned gasoline, carbon monoxide, which is formed by the combustion of gasoline in your vehicle, and nitrogen oxides, which are created when the heat in the engine makes the nitrogen in the air combine with the oxygen.

A catalyst is the substance that accelerates a chemical reaction, and within the catalytic converter itself, are two types of catalysts. The first is a reduction catalyst, which uses platinum and rhodium to reduce the nitrous oxide emissions. Nitrous oxide is produced by nitrogen oxide and nitrogen dioxide within the exhaust gasses from your internal combustion engine. Without getting rid of these gasses, your bad catalytic converter can ruin your engine.

The second catalyst type in your catalytic converter is the oxidation catalyst, using platinum and palladium to complete the job of the catalytic converter. These catalysts burn the carbon monoxide and hydrocarbons that are still located in the incoming gas, helping to get rid of the smog produced by the unburnt fuel. This helps the economy and your car’s lifespan. Without this step, the bad catalytic converter can ruin your engine.

Signs of a bad catalytic converter

A check engine light can also come on for other reasons, like these possible alternatives when compared to your catalytic converter. Your oxygen sensor could be failing, which monitors the amount of unburnt oxygen in the car’s exhaust system and sends data to the vehicle’s electronic control module. The second reason could be a loose fuel cap, which can happen from not tightening the fuel cap all the way after getting gas in your fuel tank.

The  additional reason are spark plug and ignition coil issues, which harms the system that generates the electricity the spark plugs required to ignite the fuel and air mixture within the cylinders. In addition toeh spark plug issues, the bad spark plug wires can cause the check engine light to come on since the fuel and air mixture cannot ignite. Any of these reasons can mean that the catalytic converter can ruin your engine and turn on your check engine light.

If your converter is clogged, exhaust has the possibility to build up in your vehicle and reduce the performance, lowering the overall speed, acceleration rate, and the engine ability to give more power to your vehicle. A car with a clogged catalytic converter can feel as if the acceleration is no longer there, even if the car’s gas pedal is working correctly and is not soft or spongy.

Well, this number that you will be looking for depends on a multitude of factors, like your vehicle’s make and model, the quality of the replacement unit you are reinstalling into your vehicle, labor costs at the specific hsop you givist, the diagnosis and repair of other problems, and the current market cost of the catalytic converter replacement.

The vehicle’s make and model can mean that an older car is going to cost less for a total catalytic converter replacement than a newer vehicle like a 1994 Toyota Camry vs. a newer 2010 Chevrolet Silverado. In addition, the quality of the replacement unit can affect the overall price and cost. Not all catalytic converters are these aem quality or created equal, with some available for under $100, while others can run upwards of $1000.

Furthermore, the labor costs will vary depending on the mechanic shop you visit. Some mechanics will charge you around $70 per hour for their labor costs, while others can go upwards of nearly $130 for an hour of this kind of work. Also, the time to replace it depends on the kind of car you have, with some jobs taking one hour, and others taking two hours, which will increase the labor cost.