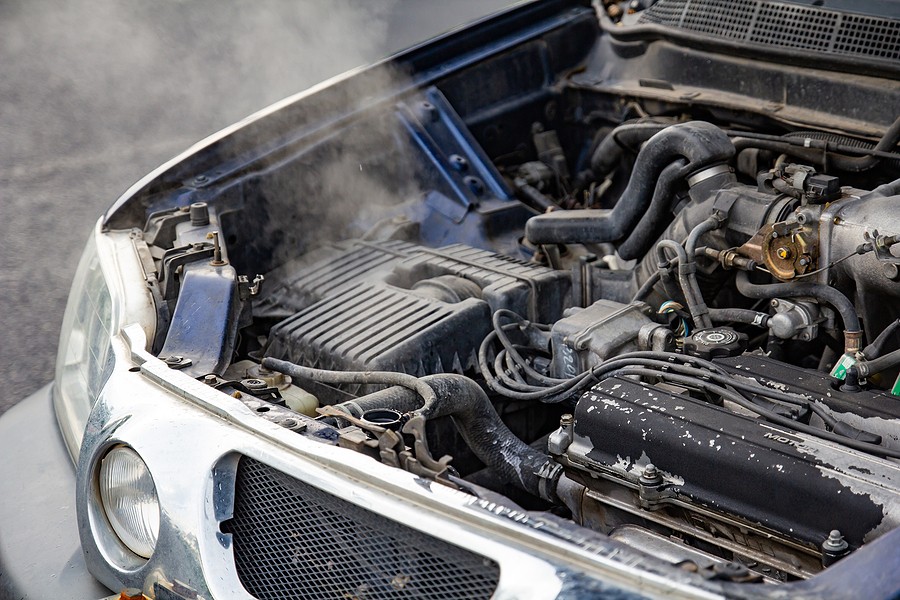 If you're asking yourself, “why does my car get hot in stop-and-go traffic?” Here are the main causes:

Engine overheating is one of the most dangerous problems that could face your vehicle. When the engine temperature exceeds the operating range, the internal components might grind against each other until they break down.

Intermittent engine overheating is even more critical because you don't know exactly what's causing the issue, and sometimes it can be challenging to replicate the problem at the mechanic shop. One of the very common situations that many drivers suffer from is when the car gets hot in stop-and-go traffic.

The good news is that automotive experts put together a list of potential reasons for the weird engine overheating behavior during traffic time. This article walks you through the list of what experts think are the main causes of intermittent traffic engine overheating.

Why does my car get hot in stop-and-go traffic?

A bad radiator fan is one of the most common problems for vehicles getting hot in stop-and-go traffic. In modern vehicles, the radiators are equipped with a certain fan that helps cool the temperature down when it gets hot. However, when you're driving at higher speeds, there's a lot of air flowing around the radiator, and the fan is unnecessary.

However, as you get in situations where you deal with stop-and-go traffic, there won't be enough wind to cool the coolant down, and therefore, the bad fans' effect will kick on. Thus, the solution for your problem is to get your vehicle inspected and replace the bad fan immediately to prevent major engine damage that could cost you thousands of dollars.

If you're driving an older vehicle, this vehicle will most likely be equipped with and mechanical fan that relies on the engine's power to move. Unfortunately, it gets a little challenging to inspect this fan unless you're driving the vehicle, which means that the only way to check this fat is by visiting the mechanic shop.

On the other hand, modern vehicles are equipped with other fans that you can inspect immediately without running the vehicle. In other words, you can do a visual inspection and confirm that the fan is running when the vehicle is parked.

Despite your vehicle type, about fan needs to be replaced immediately.

The engine requires a certain amount of coolant to cool down when the temperature exceeds the optimum threshold. However, if there is an internal or external leak, the coolant level will drop below what's needed. Therefore, you'll notice that your engine will start overheating.

Therefore, the first step when dealing with your car getting hot in stop-and-go traffic is to check the coolant level. To do so, you can easily open the hood and look underneath the radiator cap. Keep in mind that it's never recommended to open the cap when the engine is hot. The coolant is continuously under pressure, and when you open it by accident, a large amount of steam can gush out, causing severe burns.

Another common reason behind vehicles getting hot in stop-and-go traffic is a stuck open thermostat. The thermostat allows the coolant to run around the engine when the engine temperature exceeds a certain threshold.

Sometimes the thermostat might get stuck closed, which means that the whole it will never run around the engine at any time. Thus, you will immediately notice that your vehicle is overheating. You can notice that by monitoring the reading on the temperature gauge on your vehicle's dashboard.

Overtime reviews, the radiator might get clogged with several foreign objects from the road, like litter and debris. When that happens, the radiator will not do its job, and it will not be able to drop the coolant temperature as it gets hot. As a result, the coolant temperature will continuously be high. Also, as it runs around the engine, the engine temperature will not drop down because it is not receiving the right amount of cooling.

How much does it cost to fix engine overheating during stop-and-go traffic?

If your vehicle has an engine overheating during stop-and-go traffic, you must resolve the problem by figuring out the faulty component.

1.    How much does it cost to replace a radiator fan?

As we indicated earlier, the most common cause for engine overheating during stop-and-go traffic is a bad radiator fan. Therefore, you must replace the fan, and to replace the fan, expect to pay between $596 and $634. However, keep in mind that labor cost is a different story, and it should cost you somewhere between $130 and $164.

On the other hand, if the problem has to do with a low coolant level, you have to top off the coolant by adding the premixed antifreeze and water. This should not cost you a lot except the costs of the antifreeze itself. Simply because topping off the corn is not a complicated job, and it's something you can buy yourself without needing a mechanic.

3.    How much does it cost to replace the thermostat?

4.    How much does it cost to replace the radiator?

Finally, if are intermittent overheating problem has to do with a bad radiator, you might replace the radiator itself. Generally speaking, but the error of listing cost is between $677 and $839. Labor cost is a little more expensive than other replacements because replacing their dealer is a labor-intensive task. In general, labor costs would be somewhere between $224 and $282.

5.    How much does it cost to flush the radiator?

Sometimes the overheating problem does not necessarily need to replace the radiator. You might be good to go by just flushing the coolant and replacing it with a new fresh one. To flush the coolant, expect to pay between $100 and $150.

Since the most common cause for intermittent overheating during stop-and-go traffic is about the cooling fan, it is worth investigating and learning more about this fan. So let's take a closer look below at some of these facts about the radiator cooling fan:

1.    What is the radiator cooling fan, and what does it do?

The radiator cooling fan is one of the important parts of your cooling system. It is connected directly to the radiator and is responsible for drawing any hot air when engaged. Depending on your vehicle's type, you might have a mechanical radiator fan, which is most likely in older vehicles, or probably an electric cooling fan if you are driving a modern vehicle.

When the radiator's fan goes bad, it might damage the blades, and therefore, your mechanic must replace it immediately. Otherwise, you will deal with common problems, including intermittent overheating during stop-and-go traffic.

2.    What are the common symptoms of a bad cooling fan?

Learning about the common symptoms of a bad cooling fan helps you prevent dealing with situations where your engine overheats to a point where it gets completely damaged. Some drivers might not notice that the intermittent engine overheating is a big deal, and they might ignore it just because it's not continuous.

Typically, when the cooling fan is bad, you'll notice one of the following symptoms:

3.    How to replace a radiator cooling fan?

When did the cooling fan radiator goes bad, it must be replaced. The good news is that replacing the radiator cooling fan is not a complicated job, and it's one of those mechanical repairs that you can do by yourself to save on labor costs. To replace a cooling fan, you need to follow these steps:

Dealing with engine overheating can be a little frustrating because we know exactly what will happen at the end of the day. Unfortunately, if you ignored resolving overheating problems, the situation can lead to unpleasant outcomes resulting in replacing the entire engine.

When dealing with intermittent engine overheating, the situation gets a little more challenging because it can be hard for the driver to tell whether it's an ongoing problem or not. However, if you notice that your car gets hot in stop-and-go traffic, your problem is likely related to a bad radiator fan.

When you drive at highway speeds, the radiator can be cooled down by the surrounding wind around the vehicle. However, as you stop the vehicle during traffic, there won't be enough wind, and therefore, your vehicle will wait on the fan to do its job. Thus, you'll notice that the engine overheats.

If your vehicle suffers from other major problems, it might not even be worth the time and money to replace the radiator fan. Instead, you might want to consider selling your vehicle and using the money towards a better car with no major problems.

The good news is that Cash Cars Buyer is one of the limited companies that guarantee to remove your vehicle within one to three days only while paying the top dollars your vehicle deserves!