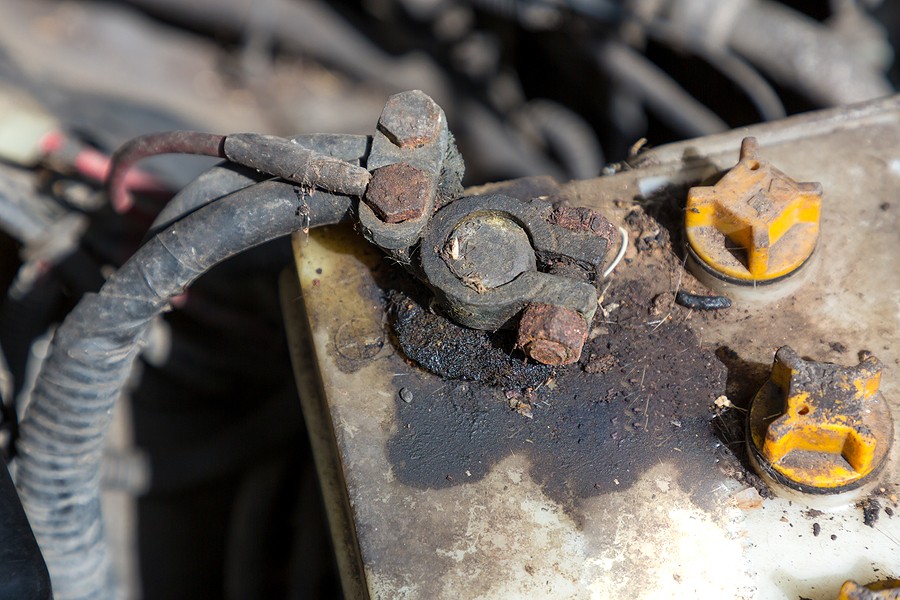 Any car owner knows that a car battery is a necessity to run and operate a car. So, when there is corrosion on your battery, you have to get to the bottom of it. Why do battery terminals corrode? We have the answer as well as related information that will help you now!

What is Battery Terminal Corrosion?

What are Some Additional Causes of Battery Terminal Corrosion?

There are a few different reasons why you may see battery terminal corrosion. Check out some of the most common causes.

Once there is an electric current, the battery turns acid into electric current. Additionally, there are instances in which the hydrogen gas in the battery will not only leak, but leak, but find its way into our environment. This leakage will react to other chemicals and substances- thus creating the perfect breeding ground for battery terminal corrosion. Depending on the side of the battery where the corrosion is located, you may be able to diagnose several battery issues. If the corrosion is on negative terminal of the battery, then this is a sign of undercharging. If you see the corrosion on the positive terminal, then this is a symptom of overcharging. Many car batteries do succumb to undercharging and this is the reason that battery terminal corrosion is far more common on the negative side.

The Battery has Been Overcharged and Overfilled

If you fill your battery with water, resulting in overfill of your car battery, then this may cause the electrolyte to seep through the vents, leading to corrosion of the battery terminals. So, make sure that you put the correct amount of water in your battery.

The Copper Clamps are Corroded

Age Of The Car Battery

Regardless of the maintenance of your vehicle, of you have a battery that has racked up years, then you should not be surprised to see some corrosion on your battery terminals. Just like we do, batteries get old. Generally, a battery has a five-year lifespan. If you are able to go beyond that five years, then consider yourself very blessed or lucky! But plan on buying a new battery every five years. Of course, there are different factors that can play a role in the battery’s health. But after five years, it’s time to pay attention to your battery and replace it once you see corrosion or other signs of deterioration.

What Are Some Of The Problems Caused By Automotive Battery Corrosion?

While there are lots of issues that will evolve from corroded battery terminals, the most noticeable issue with a battery that’s corroded, is your vehicle failing to start, when you desire that start. Think about you driving to work, singing to a tune on the radio. Sure, you noticed some powdery “stuff” around your battery last week, after you lifted the hood to put windshield wiper fluid in your car. You ignored it and decided to continue driving your car. You get to a stop light- with the red light turning green. You’re ready to go, but your car has stalled. WTF? Well, you decided to ignore the battery terminal corrosion that you saw, when you filled up your windshield wiper fluid container.  As you know, a car stalling can happen at any time, on any given day.

Not only is it an embarrassing situation, but it can make you late for an appointment, work or just cause general discord with your day’s tasks. It’s also worth mentioning that your vehicle’s on-board computer can develop problems as well. If you have a leaking car battery, or the corrosion on the terminals has eaten away far into the terminals, then you need to get that battery replaced ASAP!

Can A Corroded Battery Terminal Be Fixed?

Once corrosion happens on the battery terminals, it is not going to away with the snap of a finger, or a magic wand. The good news is, you can clean the terminals, but you have to “roll up your sleeves” and put in some work as well as “elbow grease” to clean them.

So How Do I Clean My Battery Terminals?

We’re glad you asked! Check out some ways you can clean corroded battery terminals. First, you want a steel brush as well as some cloths that you will not mind getting dirty and soiled. Each of these methods will require you to use your steel brush and cloths.

Fist take a box of baking soda and water. Next, to remove the copper sulfate that has already formed and accumulated on the terminals- you will use this combination to remove it. MAKE SURE YOU’RE YOUR CAR IS OFF AND NOT RUNNING.  Get a cup and make a baking soda and water mixture. You want the mixture to be in between a paste and a liquid. Then, take your mixture and pour it directly on the corrosion. Check out how it bubbles and begins to dissolve the copper sulfate. Then, take your steel brush and brush the terminals. Depending upon how much corrosion you have, you may have to do this a few times. After your terminals are clean, do a good flush with clean water- free of baking soda. Wipe the terminals and then place the battery clamps back in their correct positions. Many people opt for this solution, as it is seen as eco-friendly.

Have you heard of taking a can of cola soda pop to remove corrosion off of your battery terminals? Pouring cola on corroded terminals is highly effective in removing corrosion from battery terminals. Follow the steps we outlined above for the use of baking soda and water.

What About Heavy Corrosion?

If you have heavy corrosion, you want to avoid using tremendous force, should that corrosion on your battery terminals be hard to remove. For that difficult corrosion that doesn’t want to go anywhere, take your baking soda and water or soda pop and pour the mixture in a cup. Then, take your clamps and soak the clamps in the cup with your mixture in it. You may also want to pour your corrosion removal mixture onto your cloth or soft towel and then place that towel over the battery terminal. Allow the towel to sit on the terminals for about 30 minutes then evaluate the terminals for any corrosion removal and improvement.

How Can I Prevent Corrosion On My Battery Terminals?

There are a few ways that you can prevent corrosion of a battery terminal. Check out some preventive methods below!

There are lots of anti-corrosive sprays that you can purchase and highly effective in preventing terminal corrosion. But if you find that these are too costly, you may opt for grease or even Vaseline or grease most car care experts recommend the Vaseline over the grease, due to its ability to withstand heat better.

Maintenance Of Your Battery

The bottom line in preventing battery terminal corrosion is getting your battery evaluated by a professional. From corrosive sprays, to oils and greases, there is nothing better than having a mechanic look at your battery and see if there are “red flags” that may signify trouble ahead. And for the signs that your car gives you, don’t ignore them- as they can lead to some unfavorable circumstances down the road… literally!

PrevPreviousChevy 350 Crate Engine – What Year Is The Best Chevy 350 Engine?
NextLug Nut Size: Everything You Need to KnowNext