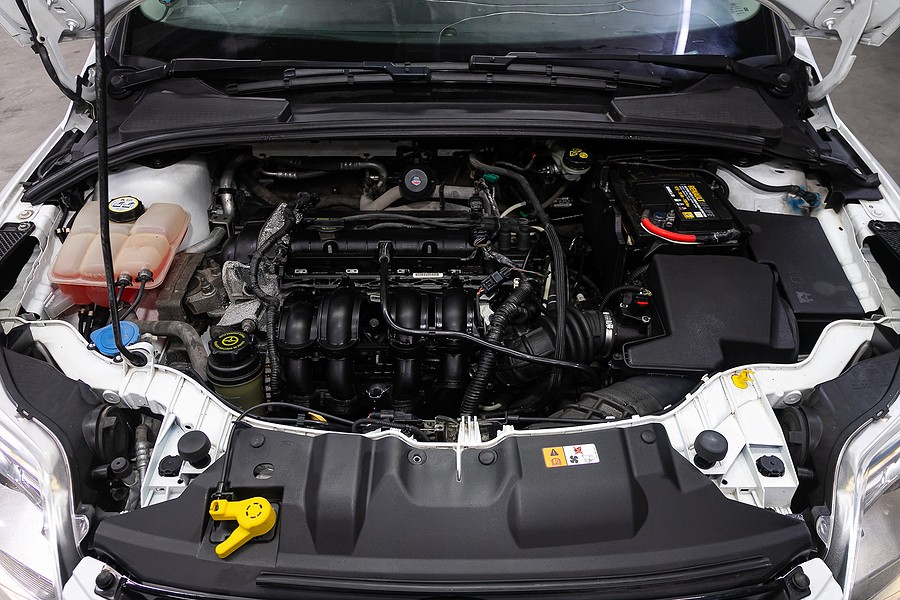 When it comes to hauling and towing, Ford has always been a leader in the industry, with at least half a dozen engine options like the V6 EcoBoost and the Power Stroke Turbo Diesel, across five truck models from the Ranger to the F-450, it is a hard decision which truck would work best for you, The F-150 alone is offered with six engine options. Choosing the right ford truck for you comes down to knowing what you need and what engine can give you what you need. Ford engines are generally categorized between two engine families, the turbocharged, gasoline EcoBoost, the diesel-powered Power Stroke, and the Twin Independent Variable Camshaft Timing or Ti-VCT, which Ford has been producing since 2009, 2010 and 2011 respectively.

The turbocharged, direct-injection gasoline EcoBoost engines have been produced by Ford since 2009, rival engines with more massive displacements in terms of power and torque but still having 30% better fuel efficiency and 15% fewer greenhouse emissions. Ford believes that developing the EcoBoost technology far outweighs the development of hybrid or diesel engines because of lesser cost and its versatility, with it being able to be used across most of Ford's vehicle lineup, from the Focus, to the Ranger and even the Ford GT.

Most Ford trucks are equipped with a V6 EcoBoost engine, here are some of its variants.

Introduced with the 2018 Ford F-F150, together with a year older 10-speed automatic transmission, the second-generation Nano can give you 25 lb-ft or 34 N-m more torque than its predecessor. It uses the same lightweight, high strength compacted graphite iron (CGI) material as the first generation but has quite a number of changes from it. Most upgrades were derived from the second generation 3.5 L EcoBoost from the previous year, most notable is that besides still retaining the direct injection system, the 2nd gen Nano has been added with a port fuel injection system. To improve fuel economy but also boost power, the friction inside the cylinders have been reduced, plus thanks to the new exhaust gas recirculation (EGR) system, which recirculates some of the engine's exhaust back into the cylinders which then dilutes the oxygen from the intakes which in turn helps reduce engine temperatures and improve emission further.

Two 3.0 liter twin-turbos were derived from the 2.7 L Nano EcoBoost by increasing cylinder bore by 2.3 mm, from 83.0 mm to 85.3 mm, and by lengthening the stroke of the piston from 83.0 mm to 86.0 mm effectively increasing the horsepower to 400. The 3.0 L Aluminum, as the name implies, uses aluminum instead of the traditional compact graphite iron material used on the main block by the previous Nano engines.

Before it was used in Ford Trucks, the first generation 3.5 L EcoBoost first came out with the 2007 concept car Lincoln MKR and was dubbed TwinForce back then. Designed to match the output of a regular V8 with almost twice its displacement, the TwinForce produced 415 hp (308kW) of power and 400lb-ft (542 N-m) of torque. This effectively increased fuel efficiency by at least 15% while simultaneously reducing greenhouse emissions. The engine reappeared again in another Lincoln concept car, the MKT, at the 2008 North American International Auto Show and was dubbed the EcoBoost. Ford officially started producing the EcoBoost on May 19 the following year.

Replacing the old 5.4 L supercharged modular V8 for the previous generation Ford GT, the second generation 3.5 L EcoBoost V6, the D35, was introduced with the 2017 Ford GT at the 2015 Detroit Auto Show. The engine, coupled with a seven-speed semi-auto transmission, can produce a maximum power of 647 hp (482kW).

Across the 2017 F-150 lineup, the second generation 3.5 L EcoBoost will replace the first-generation engine. Coupled with the new engine is the equally new 10R80, a ten-speed automatic transmission.

Since 1994, Ford has been using a co-produced diesel engine with Navistar International and rebranding them as Power Stroke, but in 2010, Ford started developing and producing their original diesel engines starting with the 6.7 L Power Stroke V8. The Power Stroke has since been a direct competition of big-block V8 and even the gasoline engines V10 like the Duramax V8 of General Motors and the Dodge Cummins B-Series.

Below are some of the notable variants of the Ford Power Stroke:

The 7.3 Liter Power Stroke is the first-ever engine Ford has rebranded. It is their own Navistar T444E turbo-diesel V8 version. It replaced the 7.3 L IDI V8 in 1994. Despite being a totally new engine, the 7.3 L Power Stroke shares the same stroke and bore dimensions with the 7.3 L IDI which why both engines have a 444 cu (hence the Navistar name), or 7.3-liter displacement and were standard on the same 3-quarter ton and larger models of their very own F-Series and Econoline Trucks and Vans.

Replacing the 7.3 Liter Power Stroke after almost a decade in service, the 6.0 Liter Power Stroke was first used only for about a year on Ford F-Series Trucks but lasted on the Ford Econoline Vans until 2009. With variable-geometry turbocharger and intercooler, a split-shot HEUI (hydraulic electronic unit injectors) fuel injection system, and OHV 4-valve per cylinder valve train, this engine outputs a maximum power of 242 kW or 325 hp and 773 N-m or 570 lb-ft of torque. Sadly though, what makes the 6.0 notable is that it is not the most reliable of the Power Stroke engines.

Known as the Slug, the 6.4 L Power Stroke was introduced in 2008 as the model for that year for Ford F-Series trucks, and it was considered as the first Power Stroke engine used on light trucks that uses OEM (original equipment manufacturer) turbochargers. It was also the first to integrate a DPF or diesel particulate filter, which removes soot or diesel particulate matter from the diesel engine's exhaust gas. Unfortunately, together with the active regeneration system, DPF greatly reduced the fuel economy of the engine even if it proved to be relatively strong and somehow reliable. In 2010, it was retired in favor of the 6.7 L Power Stroke, which Ford has developed in-house.

The 6.7 L Power Stroke is equipped with a compound variable-geometry turbo system where the air first enters the larger LP turbo where it gets compressed and also pre-spools the seconder before it is fed to it, the secondary smaller HP turbo then directs it to either the intercooler or the engine. This system, which reduces turbo lag as is set in a way to provide an upgraded throttle response, helps the engine produce a maximum horsepower of 350 (261 kW) and a torque of 650 lb-ft (881 N-m) despite having to meet emission regulations.

Originally the 6.7 L Power Stroke was supposed to output only 390 hp (291 kW) and 735 lb-ft (997 N-m) to comply with emission regulations, but Ford updated the engine control unit software and successfully boosted the power and torque to 440 hp (328 kW) and 925 lb-ft (1,254 N-m) respectively without the need to change anything physically to the engine and achieving way better fuel economy.

Ford engines have the ability to independently manipulate both of the intake and exhaust camshaft advancing and retarding. As opposed to the older version of the Variable Camshaft Timing, this improves fuel economy and reduces greenhouse emissions while still providing improved power and torque, especially at low rev ranges.

Engines with Twin Independent Variable Camshaft Timing equipped on for trucks are listed below:

Also dubbed the Duratec 35 is double overhead cam (DOHC) naturally aspirated gasoline V6 engine produced 285 hp (213 kW) of power and 253 lb-ft (343 N-m) of twist thanks to its Twin Independent Variable Camshaft Timing system. With these ratings, and the ingenious design of relocating the water pump behind the timing cover, making it fit in any engine bay that would fit the smaller 3.0L Duratec, and the port-fuel and direct-injection (PFDI) system which utilized two fuel injectors per cylinder effectively improve power and fuel efficiency, even more, it replaced the smaller engine in some of the models from previous years.

Based off of the 4.6 L and 5.4 L Modular V8s' design, the Coyote 5.0 L V8 was initially designed for the Mustang GT that would be a direct competition with the Chevrolet Camaro's GM 6.2 L LS3 and the Dodge Charger's Chrysler 6.4 L HEMI ESF. In order to utilize the Modular production line tooling that already exists, the Coyote 5.0 L had to have a physical size that is close to the popular 4.6 L it was replacing, it also needs to have the same bell housing bolt pattern, deck height, and bore spacing among other specifications. The resulting engine, though significantly smaller, could match the output of its competitors, and for a small engine to handle all that power, Ford had to use webbing extensively in the casting for reinforcement to strengthen the block instead of increasing the thickness of the walls which would defeat the purpose.

Featuring an all-new four valve double overhead cam (DOHC) and a cam-torque-actuated Twin Independent Variable Cam Timing (CTA Ti-VCT) which was the first ever to be implemented by Ford on a V8, which greatly increases power and fuel efficiency while decreasing greenhouse emissions, the Coyote can produce a maximum of 395 hp (295 kW) of power and 400 lb-ft (542 N⋅m) of torque.

As mentioned above, the right engine for the right truck will greatly depend on your needs. For light hauling or for a truck that you mostly would use as your everyday commute, the Second Generation 2.7 L EcoBoost would be perfect for you, it's got enough power and torque at 325 hp and 400 lb.ft respectively you'll have all the power you need, and then some for the light towing jobs when you decide to go traveling on the weekends. But if your truck needs to do that light towing every day or maybe the occasional heavy loads, you'd be better off with the Ford Coyote 5.0 L Ti-VCT V8 with of 395 hp (295 kW) of power and 400 lb.ft (542 N⋅m) of torque you'll have no worries that your truck will keep on chugging all week long, plus with the added bonus of this engine being modular, parts won't be hard to come by which is convenient especially for a workhorse truck. Now if heavy hauling and towing are what you need, there's no question that what you need is the 440 hp (328 kW) and 925 lb-ft (1,254 N-m) 6.7 L Power Stroke, equipped in Super Heavy Duty trucks like the F-450, this engine will not let you down especially when it comes to long hauls and heavy and large towing needs.