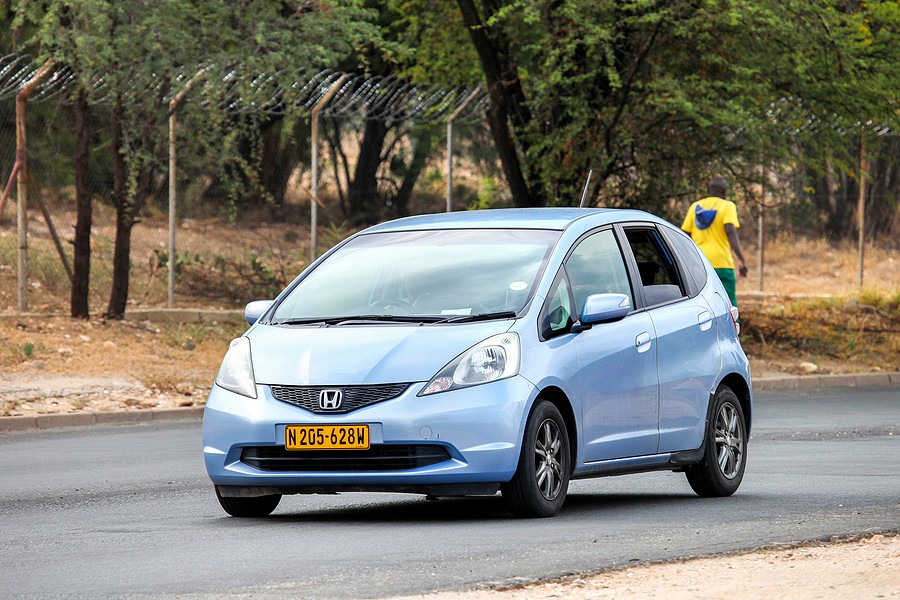 Honda has always been synonymous with reliability, luxury, and affordability. Like the Civic, Accord, and Odyssey, their models have always been crowd favorites, and even pre-own units have always been best sellers. Hondas have always been tough cars, and age just makes them better, and in this article, we will list some of the best used Honda cars for you to consider.

Since it was introduced to the western market in 2008, the Fit has become one of the best compact cars in the market, thanks to its sporty styling and fun-to-drive demeanor. With the Fit you don't have to drive a conservative and dull car; coolness doesn't have to be the price you have to pay to get an excellent fuel efficiency, amazing cargo space, and practicality. And now on its third generation, the Fit just got a whole lot better, still carrying its distinctive sporty look that has seemed to have matured. Though it's overall body length has shrunk, the new Fit is no longer the baby of the Honda family, with awesome 16-inch wheels, LED tail lights, and all-new grille design.

The US version of the Fit was introduced at the 2014 North American International Auto Show and now upgraded with a DOHC i-VTEC engine replacing the previous SOHC engine. Though the engine is still a 1.5 L Inline 4, it now has direct injection technology giving it better fuel efficiency despite having more power than the previous engine. The upgraded engine is coupled to either a six-speed manual transmission, replacing the previous model's 5-speed manual or a continuously variable automatic transmission or CVT, replacing the old model's five-speed auto. The third generation can have a rating of up to 36 miles per gallon combined.

Standard features on the base trim of the 2015 Fit, the XL, include a multi-angle rearview and back up camera, adjustable driver seat, automatic headlights, all power accessories, and an infotainment system with Bluetooth connectivity, CD player, a 5-inch display, iPod and USB interface, and an auxiliary jack all connected to a four-speaker sound system.

The top-tier trim the EX-L gets you leather upholstery, heated front seats, HD and satellite radio, and a voice command navigation system.

Look for the EX trim in the used car market; with it, you get a decent enough set of upgrades without shelling out that much.

Arguably the best Honda Civic of all time will always be the 2000 Honda Civic, but let's face it, though it is still awesome, 2000 is pretty old for a car, thankfully a more recent model that is up to par with the 2000 model is available, and that's the 2016 Honda Civic. This Civic may be small, especially compared to other cars on the same market range, yet it packs a lot of power thanks to its 2.0 L inline-four engine that produces 158 hp and 138 lb-ft of torque. If that's not enough power for you, a turbocharged 1.5 L inline-four engine that can produce 162 lb-ft of torque and 174 hp is also available for top trims. Both engines can be mated to a continuously variable transmission or a six-speed manual transmission. If you want a sportier feel and drive, look for the coupe with a Touring trim when you check out the used car market.

The top-tier Touring trim comes standard with Honda Sensing features that use a radar system together with cameras around the car for a 360-degree surround-view and monitoring for assisting the driver for a safer drive. It also comes with remote engine start, LED headlights, heated front, and rear seats, adjustable driver's seat, a power moonroof, and an infotainment system that includes Android Auto, Apple CarPLay, GPS satellite navigations system, a 7-inch touchscreen, and a 450-watt premium audio system. If you've got the cash to spare, you are getting the best value for your money with this trim, not to mention it's the coolest trim.

The other four trims of the 2016 Civic are the LX cruise control, rearview camera, and a standard infotainment system with a 5-inch display, Bluetooth connectivity, and a four-speaker audio system. With the EX you get Honda LaneWatch, remote start, proximity keyless entry, a moonroof, and the infotainment system gets upgraded with a 7-inch touch screen, Android Auto and Apple CarPlay. The EX-L and EX-T trims get the more powerful turbocharged engine cooler larger alloy wheels (which might have been charged for an aftermarket set, it is a Civic after all), heated seats, satellite radio and leather seats for the latter.

Since it has been introduced to the US market in the late 70s, the Honda Accord has been one of the best sedans in the market. A lot of previous Accord models have received a lot of complaints, mostly with regards to reliability, but the 2018 models have great improvements that answer these issues. The 2018 model is more spacious and definitely more comfortable thanks to Honda reworking the interior making one of the most luxurious in its class. It is also rated with great safety scores by the National Highway Traffic Safety Administration thanks to the wide array of safety features it is equipped with.

Inside and out the 2018 Accord is top of the class with luxury and styling, from fastback classy by still sporty profile to the faux-leather door inserts, leather upholstery, and even the carbon fiber accents on the Sport Trim. The infotainment has been upgraded too from the previous model's laggy touchscreen-only interface, this one has an all-new touchscreen, with Android Auto and Apple CarPlay, and to make navigating it easier, physical buttons and knobs are laid out with user-friendliness in mind. It is also equipped with adaptive cruise control with forward-collision warning and automatic emergency braking system, plus lane monitoring and keeping with lane departure warning.

The 2018 Honda Accord comes in trims, and the base LX trim comes with driver drowsiness monitoring, forward collision monitoring system with automatic emergency braking, lane-keeping, and lane departure monitoring, sign recognition, dual-zone climate control, push-button start and an infotainment system that comes with a 7-inch display, a USB port, Bluetooth connectivity, and four-speaker audio system. The Sport trim adds a sleek leather-wrapped steering wheel, a power-adjustable driver's seat, fog lights, and upgrades the infotainment system with an 8-inch touchscreen, Android Auto, Apply Play and an eight-speaker audio system. This trim can also be upgraded with the 1.5 L turbocharged engine. This trim is also the best version you should look for out in the market

Top tier trims start with the EX, which adds heated front seats and side mirrors, a blind-spot monitoring system that has rear cross-traffic alert, and a moonroof. The EX-L adds a power-adjustable passenger seat and upgrades the infotainment system with a 10-speaker audio system. The highest trim, the Touring, adds heating and ventilation to the front seats, a head-up display, parking sensors up front and at the back, satellite navigation with voice control, a WiFi hotspot, and a wireless phone charger.

Based on reviews, the best Honda CR-V in the used car market is the 2006 models, but like the 2000 model Civic, it is on the old side, and of the more recent models, the 2016 CR-V has the most positive review. The CR-V is not the sportiest crossover out there, but that was never what Honda was going after from the start. This mid-size SUV is an all-rounder vehicle geared towards usability and everyday use. It's got great handling, a good view of the road, thanks to its ample ground clearance, fuel-efficient engine options that can give you enough power when needed.

The interior of the 2016 CR-V is spacious and doesn't lack in luxury. Getting in and out is easy and convenient thanks to wide-opening doors, seating is also comfortable even in the back seats, head and legroom are more than enough, greatly thanks to the lack of a transmission tunnel that would have protruded along the center of the back rows of seats. Behind the rear seats is a 37.2 cubic feet cargo space, easily the largest of its class, but if that's still not enough for you, folding up those rear seats is pretty easy, doubling up that cargo space.

The minivan has a reputation of being a seriously dull vehicle that lacks styling and character, but when it comes to the 2017 Honda Odyssey, that is totally false—equipped with a powerful V6 engine that gives you a lot of power and amazing fuel efficiency, a leader in its class. The Odyssey's inside is plenty spacious, as minivans should be, the third-row seats can seat two adults comfortably, getting in is as easy as folding the second-row seat with a pull of a lever, and speaking of the second rows seats, these can be moved forward so passengers upfront can tend to the kids seated there. And even packed with passengers, the 2017 Odyssey still has spacious cargo space behind the third-row seats, at 38.4 cubic feet packing luggage for the whole family won't be a problem.

The 2017 Honda Odyssey is powered by a 3.5 L V6 engine that produces 250 lb-ft of torque and 248 hp and is offered in six trim levels. The base LX trim comes standard with 17-inch steel wheels, dual-zone climate control system, power front seats, a 60/40 rear folding seats, rear privacy glass, a rearview camera, and an infotainment system with 8-inch display, Bluetooth connectivity and a seven-speaker audio system. The EX is equipped with 17-inch alloy wheels, keyless entry and start-up, power sliding doors, tri-zone climate control, HondaLink smartphone connectivity app, and an additional 7-inch touch screen. Safety features include automatic headlights, LaneWatch blind-spot camera system, and heated mirrors. The SE trim comes with a 115-volt power outlet, a built-in vacuum cleaner, handy when your kids love snacks during trips, and a rear-seat entertainment system with satellite radio. The EX-L trims build on the EX trim but include the SE trim's radio satellite; it adds a sunroof, a chilled storage box, heated front seats, leather seating, and a power liftgate. If you prefer this trim, look for ones with the following options equipped.

The top two trims Touring and Touring Elite get everything from the lower trims but replaces the 16-inch or 17-inch wheels with 18-inch alloy wheels, driver-seat memory settings, third-row retractable sunshades and foldable armrest for the seats and foglights. The Touring Elite further ups the premium feel by adding xenon headlights and an upgraded rear entertainment system with a widescreen monitor, HDMI input, HD radio, and a premium 12-speaker surround-sound audio system.

The trim we suggest you should focus on looking for is the EX-L, it has enough of the standard equipment to give you a comfortable and tech-filled minivan perfect for the kids without paying too much of a premium. Most EX-Ls would also most likely be upgraded with some of the best optional features.