What Makes the 2021 Ford Bronco different from Bronco Sport 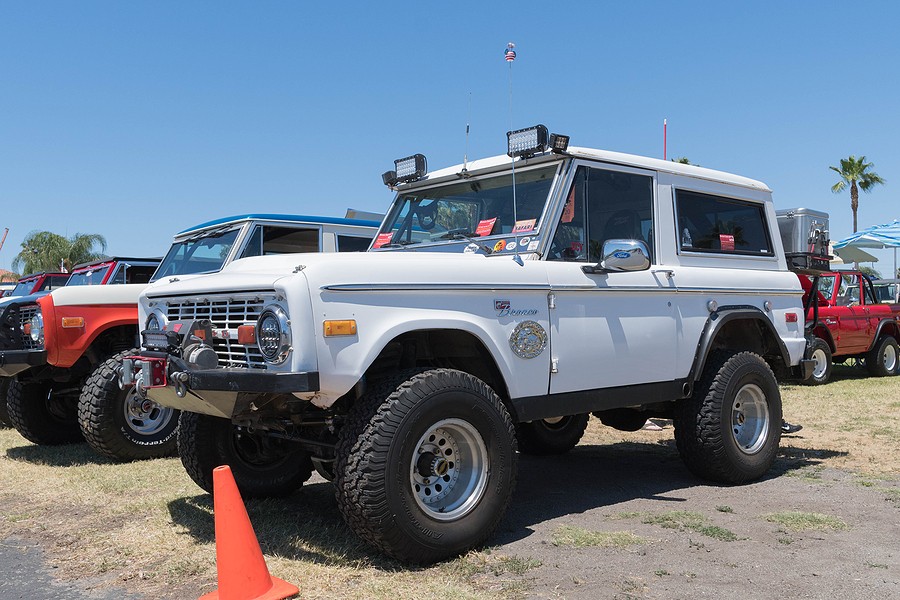 The iconic Ford Bronco is back and with a hip retro styling combined with advanced features and superb off-road capabilities it is set to impress. It was torture-tested in the Johnson Valley desert, known as home for the king of the Hammers. It also took on one of the world’s most grueling off-road endurance races, which is the Baja 1000.

Many off-roading fans have waited for this moment when Ford would finally bring back the Bronco name and it certainly has been worth the wait because they have not only unveiled one but two distinct off-roading SUVs under the legendary nameplate. The same day the 2021 Ford Bronco was unveiled, the Bronco Sport was also introduced. Before any confusion sets in let’s make a detailed comparison of how the two are different so you can decide which one is the right fit for you.

A 10-speed automatic complements two engine options for the Standard Ford Bronco, which are turbocharged 2.3 liter EcoBoost inline-four that yields 270 horsepower and 310 lb-ft of torque and for more oomph a twin-turbo 2.7-liter EcoBoost V6 that generates 310-hp and 400 lb-ft. But critics have been explicit in their praise for the optional seven-speed manual transmission, because of which the absence of a V-8 option, for now, can be easily overlooked.

The manual transmission, however, is only available with the smaller engine. Broncos come standard with a four-wheel-drive system and option for an all-wheel-drive system. And if that is not enough there are also a lot of available equipment enhancements available such as 35-inch mud-terrain tires.

But if you still want an off-road-ready vehicle and don’t exactly need as much performance capability, then the Bronco Sport is the better option. Being the smaller vehicle it comes in with a less powerful turbocharged 1.5-liter four-cylinder engine with 181-hp and 191 lb-ft of torque, and a 2.0-liter four-cylinder engine that generates 275 horses and 275 lb-ft of torque, which is available for the upper-level Badlands and First Edition trims. If you would like more off-roading equipment then go with the Badlands. Bronco Sport is also suitable for a roof-tent camping trip.

Both the 2021 Ford Bronco and Bronco Sport have Ford’s Terrain Management System with G.O.A.T Modes (meaning Goes Over Any type of Terrain), so you can adjust your drive mode to match five standard environments such as: Slippery, Sand, Sport, Eco and Normal, with the standard Bronco Badlands coming in with additional modes such as Mud/Ruts and Rock Crawl. It also substitutes Sports Mode for Baja. There are a total of 8 available modes that varies by trim.

If you want a body-on-frame truck-based SUV with a longitudinally mounted engine, based on the next-generation Ford Ranger pickup truck then go with the standard Bronco but if you want a FWD Based, transverse-engine, unitized body-and-chassis vehicle that is a Ford Escape crossover then the Bronco Sport is the better choice for you.

The standard Bronco has a control-arm front suspension with an optional front anti-roll bar disconnect device for maximum suspension articulation. It has a live axle at the rear located by radius arms or rods and a Panhard rod. The standard Bronco has impeccable off-road options like locking front and rear differentials and the much needed underbody armoring to go along with it. It can easily handle sharp drops and ease to steep inclines of rugged terrains as the standard Bronco has an available best in its class departure angle of 37.2 degree and 29 degree breakover angle. And if that is not enough it has an impressive approach angle of 43.2.

On the other hand, Bronco Sport has fully independent front strut and rear multilink suspension design. With its unibody construction and independent suspension it should be able to deliver a smoother ride and is more suitable for daily commute than the standard Bronco which is set up with more off-road capabilities. The Bronco Sport can also add an off-road suspension and multiple trail modes for where the surface ends.

With the standard Bronco you have a choice of Getrag 7MTI550 seven-speed manual gearbox featuring a super-low “granny gear” first ratio which makes extreme rock crawling possible or opt for Ford's version of the excellent 10-speed automatic, that was co-developed with General Motors. Bronco Sport, on the other hand, has the Ford Escape's eight-speed automatic transmission. With the standard Bronco’s race proven and turbocharged Ecoboost engines with segment-first transmission technology it has the best combination of fuel efficiency, gearing and output to take on the toughest terrains.

When it comes to towing capacity, when properly equipped the Bronco can tow up to 3,500 pounds versus the 2,200 pounds capacity of Bronco Sport.

With Bronco you can choose from  three hard and soft top designs, each of which provides different configurations between fully open and enjoy the “Open-Air Experience,” and  fully closed. All you have to do is snap, push and lift away the roof. The Four-door models also boast of a class executive hardtop panel that can be removed to provide second-row passengers the open air excitement without having to remove the rear cap. If you want unlimited sun and wind and in some instances rain and mud you can simply remove the panel without having to worry about the cleanup with its industry-first waterproof, marine-grade vinyl upholstery and available floor coverings which are rubberlike with integrated drain in each footwell.

The frameless doors that are Class-exclusive are lightweight and easily removable. With four-door models making it easier to store them on board. Its convertible nature, not to mention its two- and four-door body styles along with its superb chassis and drivetrain gives the vehicle a competing chance against the famous Jeep Wrangler.

Bronco Sport on the other hand is like any conventional SUV with permanently attached roof and doors, although there might be an option for a sunroof. Also having the overhangs shortened and suspension hiked up makes it more of an off-roader than the Ford Escape.

Both vehicles have a little more in common when it comes to their interior. Both come standard with an aesthetically pleasing and durable interior that you can choose to upgrade with some leather upholstery.  Both vehicles also share a lot of styling elements inspired by the original Bronco from the ‘60s but the larger Bronco has more similarities with the old Bronco when it comes to design and overall shape. It is however important to note that the similarities to the original SUV are superficial.

The larger Bronco also wears a more modern look. The touchscreen integrated directly in the middle of the dashboard and the switchgear design gives it a more state of the art look. The Bronco also offers more unique interior touches making the off-road adventure more enjoyable with attachment points in the instrument panel to mount cameras or phones.

The smaller Bronco has an interior comparable to any regular compact SUV with a tablet-style touchscreen, a more conventional center console layout, and a rotary knob for the automatic transmission. This SUV has available easy-to-clean cloth upholstery as well as washable rubber flooring, and silicone-sealed control switches. It also has an available storage bin found beneath the second-row passenger-side seat to help passengers keep whatever dirty gear away from the rest of the cabin.

The standard Bronco looks more rugged, chunkier and wider like a true off-roader, while Bronco Sport is the much tamer version and wouldn’t look out of place at any parking lot, perfect for everyday use. It was clearly made and designed to be the more road-friendly model of the two. The Bronco belongs to the wild as a pure off-roader dream vehicle with its chunky fenders, short overhangs and massive tires.

The two Ford models also offer modern infotainment systems that come with in demand features like Apple CarPlay and Android Auto. But the difference is that the standard Bronco features Ford’s latest Sync 4 software, while the Bronco Sport has Ford’s 3 software.

The latest in-dash Sync 4 software powers the standard 8.0- or available 12.0-inch touchscreen option located at the middle of the Bronco's dashboard. The purposely built instrument panel/touchscreen was inspired by the first generation model with controls and gauges that are intuitive and clearly visible. The Sync 4 software includes wireless capable Apple CarPlay and Android Auto, over-the-air updates, and more computing power. And not only that, the Bronco’s navigation system comes with over 1,000 off-road trail maps pre-loaded.

The  older Sync 3 system found in Bronco Sport also comes standard with Apple CarPlay and Android Auto, but without the wireless capability. All models only get an 8.0-inch touchscreen. But Ford has reported that the Bronco Sport will be made available with a long list of driver assist systems that include adaptive cruise control, autonomous emergency braking, automated lane centering, and lane-keep assist. Ford also said the Bronco will be getting some driver-assist features from its Co-Pilot360 suite.

Another feature common to both models is Trail Control that will serve as low-speed and off-road cruise control. But the Bronco also gets Trail Turn Assist using torque vectoring that will narrow the turning radius, and it also gets an off-road one-pedal driving feature.

The bigger and more capable Bronco is obviously the more expensive SUV although the difference with the smaller Bronco may still surprise some. The two-door standard Bronco has a starting price of $29,995 (including destination), while the four-door model has a starting price of $34,695. The Bronco Sport’s price starts at $28,155 and with its most expensive tag at $39,995. The most expensive Bronco is priced at $64,995.

So which Bronco is best suited for you?

The answer is plain and simple. It depends on your main purpose for using the vehicle. If you wish to go off-roading on a regular basis, then the Bronco is the best choice. It’s far more capable than the Bronco Sport as an off-roader on any type of terrains plus it comes with unique features to enjoy the open air. But if you’re only planning to go off-roading occasionally and plan to use your vehicle on a daily basis without totally sacrificing your want for a rugged vehicle you can comfortably take camping every once in a while then Bronco Sport is the perfect fit in the compact SUV class.

PrevPreviousWhat Car Models Does Kia Make
NextWhat is the Point of Getting a Vehicle History Report?Next