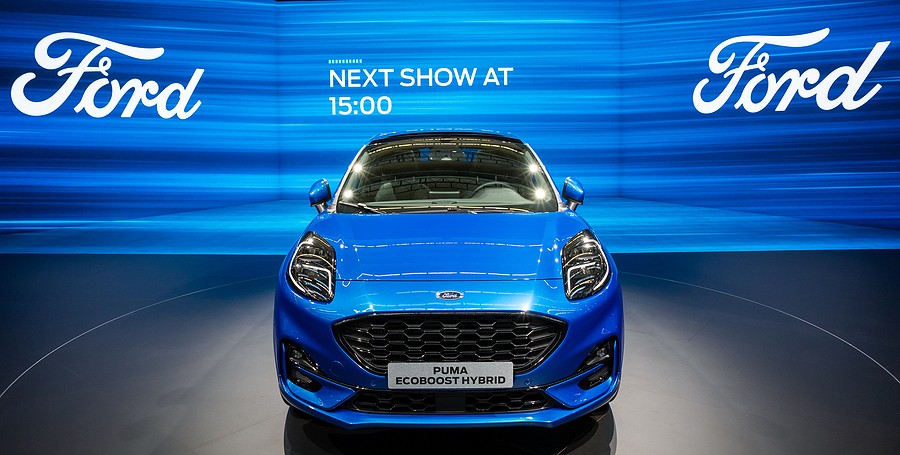 EcoBoost engines are available in many of Ford's most famous vehicles but what does EcoBoost mean? Many Ford cars, vans, trucks and SUVs can be equipped with EcoBoost, which makes Ford a frontrunner in automotive engineering. Exactly how does EcoBoost engines work and what makes them so special? We will explore these in this article

What Does EcoBoost Mean?

Over the last decade or so, the term EcoBoost has become synonymous with Ford engineering. The Ford EcoBoost engine, which was first introduced in 2011, represents a significant development in Ford engine technology. Following the financial crisis in the United States in 2008, and with oil prices approaching all-time highs, Ford devoted their best and brightest to developing the EcoBoost engine in 2009.

EcoBoost, in a nutshell, is a combination of technologies designed to improve engine efficiency for Ford customers. While it seems to be straightforward, there is a lot more to the title than meets the eye.

Ford's EcoBoost gasoline engines are turbocharged, direct-injection engines that are engineered to produce more horsepower and torque while still being more fuel efficient. EcoBoost engines, which were first introduced in 2009, now come in a variety of configurations and power a wide range of Ford vehicles.

EcoBoost engines come in sizes ranging from 1.0 to 3.5 liters. EcoBoost engines are able to balance outstanding ratings in both engine output and fuel efficiency thanks to its particular blend of technologies.

What Does EcoBoost Mean: How the Engine Works

What does EcoBoost mean when it comes to how its engine works? Since EcoBoost engines are turbocharged and use direct injection, they are able to produce such amazing power and efficiency figures. Turbocharged engines drive more air into the engine than a conventional engine would, boosting power output without increasing the engine's capacity. The intact tract component of the fuel injection process is eliminated with direct injection, which increases performance.

EcoBoost engines are engineered to match the power output of much larger naturally aspirated engines. They can produce more horsepower and torque without raising the engine's size. In addition, because of the use of direct injection cutting out the intact tract portion of the fuel injection process, EcoBoost engines have an improved fuel efficiency. Ford takes pride in the fact that EcoBoost engines will improve fuel efficiency by 30 percent while emitting 15 percent less greenhouse gases.

EcoBoost engines, as seen in the 2015 Ford F-150, have unrivaled towing capability while still providing substantial power and acceleration without sacrificing gas mileage. In terms of dependability, Ford regularly produces some of the most dependable engines on the market, and the EcoBoost is no exception.

What does Ecoboost mean when it comes to its different specs? The EcoBoost lineup includes multiple engines, each of which serves a distinct function.

The 1.0 litre version has three cylinders and a single turbocharger, making it ideal for the 2015 Ford Fiesta and 2015 Ford Focus. The 1.0-litre EcoBoost is a quiet but surprisingly perky little boy, with 123 horsepower and 148 lb-ft of torque. The 1.0 litre offers an economical ride with 8.1 L/100km in the city and 5.9 L/100km on the highway, fooling you into thinking you're driving a smaller car.

Ford developed a 2.0-liter EcoBoost engine with Twin Independent Variable Cam Timing for cars like the Focus, Fusion, Taurus, and Escape. This allows the onboard computer to measure ideal valve timings more precisely, allowing the engine to provide power while maintaining fuel economy during aggressive acceleration.

The 2.0-litre engine has four cylinders and produces approximately 245 horsepower. Ford launched the “twin-scroll” turbocharger in 2015, allowing the new 2.0-litre to produce more low-end torque than previous versions and allowing for the first time all-wheel drive.

The 2.3-liter I4 EcoBoost engine with a twin-scroll turbocharger was fitted to the all-new 2015 Ford Mustang, allowing for more power and quicker engine response. The Mustang's 2.3-litre four-cylinder engine produces over 300 horsepower, more than enough to get the job done.

The 2.7-litre twin turbo V6, which debuted with the 2015 F-150, is the final 2-litre EcoBoost option. This engine was designed specifically for truck applications, resulting in excellent fuel economy in both regular driving and hauling and towing. Bringing a whole new different level in answering what does EcoBoost mean.

This beast is equipped with twin water-cooled turbochargers that provide a maximum boost of 12 PSI. It produces comparable torque and power to a conventional 6.0-litre or larger displacement V8, but with at least 15% improved fuel efficiency and lower greenhouse gas emissions. This engine has quickly become a favorite on the 2015 F-150, with a total output of 365 horsepower.

Variations from the previous generation

The inclusion of port fuel injection, while retaining the direct injectors, is the most noticeable improvement. The port fuel injection was introduced mainly to meet the 3.5L HO Raptor engine's fuel output requirements, but it also has some advantages for the 3.5L EcoBoost. It will keep the intake valves clean by preventing buildup and allowing fuel to flow over them.

The high-pressure fuel pump and direct injection system will turn off in certain engine conditions, such as low rpm and low loads, and the engine will only use port fuel injection, minimizing performance losses caused by the HPFP. Both systems would use a cold start to minimize emissions caused by cold cylinder walls and poor fuel atomization in direct injection.

The cam drive system was upgraded from a single primary chain to a two-chain system that drives each cylinder bank separately. The side plates of the chains were thickened in addition to the dual main chains.

To drive the two primary chains, the cam chain drive sprocket on the crankshaft is a double gear configuration. These two modifications were made to enhance harmonics and to make the chain stretch that occurs over time on the first generation 3.5L EcoBoost less noticeable.

The camshafts were hollowed out to save weight, and a roller-finger follower valvetrain was added. From 10.0:1 to 10.5:1, the compression ratio was increased (except on the 3.5L EcoBoost HO for the Raptor, which remains at 10.0:1).

The VCT (phaser) architecture on the camshaft was also modified to improve reliability and reduce the creation of a tapping noise over time. Ford's cylinders have a single piston cooling jet, but the oil volume has been increased. The pistons' undersides were also redesigned to improve heat transfer into the oil.

The engine also has auto start/stop, which reduces pollution during city driving by turning off the engine after long periods of idling. In addition, the engines are 4 lb (1.8 kg) smaller than the previous 3.5L EcoBoost.

What Does EcoBoost Mean: Disadvantages

After a number of owners reported severe issues with their cars overheating, Ford had to issue a recall for the 1.0 and 1.6 EcoBoost engines in 2018. Hundreds of owners had expressed their dissatisfaction with the situation. There have also been records of some 1.6 engines catching fire while being driven. The issue with the 1.6 engine was not the same as the one with the 1.0 engine, but both were resolved.

According to Ford, approximately 45,000 3-cylinder 1.0 EcoBoost engines built between 2011 and 2013 had a nylon coolant pipe that could fail at high temperatures. The 1.6L EcoBoost engine had a problem with localized cylinder head overheating, which could cause the cylinder head to crack, resulting in pressurized oil leaks and the risk of fire.

Exhaust Issues in the 3.5 EcoBoost Engine

Between 2013 and 2015, a range of Ford vehicles equipped with the 3.5 EcoBoost engine were reported to have issues with the exhaust system. The generation of white or blue smoke from the exhaust was a very visible manifestation of this.

The issue stemmed from a potential failure of a positive crankcase ventilation hose valve cover adapter. The locking mechanism on this valve cover adapter was prone to breaking if it was removed for repairs or maintenance, and parts would fall through the open valve port cover. They eventually caught fire, resulting in visible smoke coming from the exhaust.

Fords from the 2011 and 2012 model years had issues with humidity and moisture building up in the intercooler in the form of condensation. Misfires, rough acceleration, jerking and lurching of the engine, and other issues will result. This would only happen on extremely humid or wet days, indicating that this was the source of the issue.

Calibration Issues in the 3.5 EcoBoost Engine

Ford released nine separate tuning changes for the 3.5 EcoBoost engine to address issues that have arisen. These included everything from the vacuum system to ignition issues to changing issues. There will continue to be issues if the calibration changes were not in effect.

The smell of coolant in the exhaust, a lack of heat in the cabin, and overheating engines have also been registered issues of the 2.3 EcoBoost engine. All of this is due to the use of the incorrect cylinder head gasket.

Instead of the Ford Focus RS, the cylinder head gasket was made for the Ford Mustang. Carbon buildup on the back of the inlet valves in the inlet walls was also an issue in the 2.3 EcoBoost engines. This could limit airflow and prevent the valve from closing fully as it should.

The exhaust manifold cracking was one of the most serious issues with the 2.0 EcoBoost engine. A turbocharger control valve also failed, causing problems. The engine can lose power as a result, and your check engine light can illuminate. The 2.0 EcoBoost engine also had issues with a low-pressure fuel pump because the fuel filter could easily get clogged.