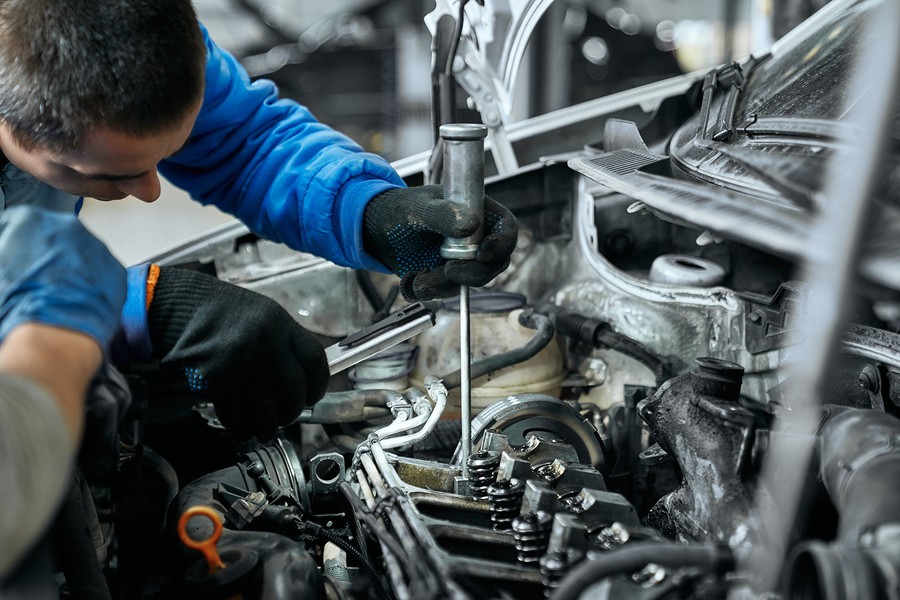 Some of the factors that can cause an engine failure include a contaminated fluid, an electrical short, premature corrosion, and water entering the engine.

A combustion engine and water do not come along. That's why it is not recommended to drive in a flooded road, and if you had to drive very slow. If you heard some sputter in your engine, this is a bad sign of a “hydrolocked engine.”

How Does a Combustion Engine Work?

Before we start discussing the hydrolocked engine meaning, causes, cost, it is crucial to understand what the different component of the combustion engine is and how does it work.

According to How Stuff Works, the central part of the combustion engine is the cylinder, which has an up-and-down moving piston. The pistons' movement cause compression to an air/fuel mixture. Most cars have multi-cylinders drivers.

Here are the main engine parts:

Now, we are familiar with the different parts of the engine; let's talk about how the combustion engine works.

The case is very similar in a diesel engine; however, the only difference is that the piston does not compress fuel/air, it compresses and heats the air, then the fuel is added to cause ignition without a need for a spark.

What Is a Hydrolocked Engine?

Engines are made to compress air/fuel mixture but not water. Water is known to be relatively incompressible. Therefore, introducing water to the cylinder can cause the piston to be “locked” in place and can result in significant engine failures.

Hydrolocked engine is known as the “killer engine.” It naturally happens when a piston tries to compress water instead of fuel/air mixture.

The term hydrolocked engine comes from the technical condition of “Hydrostatic Lock.”

In more detail, the hydrolock happens when a volume of fluid enters the cylinder, and this volume is higher than the combustion chamber when the piston is at the to most of its movement.

Once the piston reaches the water, it can not compress it and causes all cylinders to stop moving, not only this one cylinder.

What Are the Symptoms of a Hydroloceked Engine?

When you drive your car in deep water or a flood, you will first wonder, will a hydrolocked engine turn over?

The answer can be yes for a short period.

If a minimal amount of water entered the cylinder, you might hear a rough engine sound, and this water can leave the engine through the exhaust valve.

However, if there is a large amount of water entered the engine, you will hear screening, crashing, or knocking sound for the only couple of seconds. This sound will be followed by a complete shut off for your engine, and you will be just stuck in the middle of the flood.

What Can a Hydrolocked Engine Damage?

The damage resulting from a hydrolocked engine depended on the engine speed when the hydrolock happened. In general, you can have no damage at all, or you need to change the motor completely. There is no middle ground.

Sometimes, if a small amount of water entered the engine, this water can simply be blown through the exhaust.

What Are the Causes of a Hydrolocked Engine?

As we mentioned before, the hydrolocked engine refers to water entering the combustion cylinder. In other words, for a hydro lock to happen, fluid or water needs to open the bottle. Water can enter the engine in many ways.

If you are driving in flood or deep puddles where the water is more profound than the air intake, there is a high potential that the water could cause a hydrolock. Even if the flood is not very deep, if the driver in front of you produce a big wave, your engine might be hydro locked.

Similarly, driving by the beach can have a potential of water splashing at the car and possibly entering the engine.

Therefore, it is recommended that you keep a reasonable distance when driving on a massive rainy day or a deep puddle road.

The car does not have to be in motion for a hydrolock to happen; for example, a hydrolock can occur if a standing vehicle in flood.

Another cause for a hydrolock can be a damaged gasket in the engine. The gasket is responsible for keeping the coolant fluid or the engine water away from the combustion cylinder. If there is an issue in the gasket, water can cause a hydrolock.

In diesel engines, sometimes, the fuel pump pumps more fuel than needed for the combustion causing the engine to hydrolock.

Finally, a rare cause for a hydrolocked engine is any oil or water leak to the combustion cylinder.

Hydrolocked engine can occur in many types of generators, including:

How Do You Fix Your Hydrolocked Engine?

Many experts mentioned that it is straightforward and easy to have a hydro locked engine; however, it is very complicated to get it fixed because there might be many hidden damages you are not aware of.

Fixing a hydrolocked engine depends on the severity of the damage caused by water. This severity depended on the speed of the motor when the hydrolock occurred.

All fuel and ignition systems should be disabled when performing any fix to the engine.

It is recommended, however, to ask the mechanic to inspect the motor parts in case of unseen damages thoroughly.

In this case, the mechanic will pull the engine out, strip it down, and inspect for parts damages like bent or broken connector, cracked piston, scored bearings, etc.

Besides, the mechanic should perform a pressure test for the cylinder head to confirm there are no damages or cracks that happened to it.

Similarly, your mechanic should check the crankshaft in case damage got to it.

In more severe cases, the mechanic should confirm that other parts in the car did not get affected by the hydrolocked engine, including the starter, the flywheel, the transmission, the engine block, the connecting node, and the pistons in details.

How to Prevent Hydrolock?

By now, you understand that you don't want any water to enter your engine. Therefore, there are many ways to prevent your engine from hydrolock.

If you have a cold air intake connected to the air intake, you might consider replacing it with your stock air intake. With that, you will prevent any water from entering the engine cylinder.

If there is a flooded road, you want to prevent driving through it as much as you can. If the water level gets higher than the level of your air intake, this water can quickly enter the engine cylinders, causing severe engine failure.

Consider inspecting your motor for any leak in case the coolant or other fluids are leaking. If they leak, there is a great potential they can enter your engine cylinder and cause engine failure. A sign for leaking engine coolant can be a green puddle under the car when parking for a quite amount of time.

If you couldn't prevent driving in a flooded road, turn off the engine to prevent water from entering the engine cylinders. If things got worse and the water already came to the driver, never try to restart your car.

If the engine was moving slowly and the damage was not severe, you might need to prepare a couple of hundred dollars plus the labor cost. However, if the engine experienced significant damages, you need to make thousands of dollars.

In general, replacing the engine with the used or new driver can cost between $3,000 to $10,000 in addition to intensive labor.

Deciding no whether it is worth fixing your hydrolocked engine depends on many factors, including the car, make, model, year, value, and condition.

If your car value is not very high and the cost of repair is close or higher than the car value, you probably need to get rid of this car.

You can ask yourself the following questions that can help you decide:

Does Insurance Cover a Hydrolocked Engine?

Insurance covers for a hydrolocked engine not only depends on the type of insurance but also it depends on the policy coverage for specific causes and effects.

If the engine failure was due to water, then you need other insurance than what your regular basic insurance can cover. The primary protection only covers damages due to accidents, and it is the minimum requirement by the state.

Car accidents will not cause a hydrolocked engine unless you can confirm that the accident caused some water to enter the very rare engine.

Usually, comprehensive insurance coverage can help you pay the expenses for fixing your hydrolocked engine. However, you need to confirm that the policy covers this specific type of cause and effect. For example, you need to check if the insurance covers vehicle damages from driving through puddles, natural disasters, and different weather events.

How to Fill a Hydrolocked Engine Insurance Claim?

If for any reason, you had a hydrolocked engine, you need to confirm that your insurance policy covers such damages.

The first thing you need to do after is to call your insurance company and file a claim to inform them that you encountered a hydrolocked engine.

The insurance will assign an inspector to do a full investigation of the level of damage and the causes of the hydrolocked engine.

Once the insurance company collects enough information to confirm that the cause of the hydrolocked engine is events like puddles, floods, weather, etc., they will accept to pay the repairs for you. Of course, you have first to pay any deductibles required by your policy.

If the cause of the hydrolockd engine is coolant water entered the engine, then this does not fall in the category of what the comprehensive coverage can cover.

Finally, comprehensive insurance coverage has some exceptions to cover any unintended damages. This way, innocent owners can apply for exemptions to cover the costs of repairing the hydrolocked engine even if the initial investigations resulted in the company not paying the repairs.

With that in mind, it is imperative to select the proper insurance policy cover for your car. If you got the insurance to cover hydrolocked engine damages, you could save yourself lots of money.

One of the factors that can cause engine failure is water entering the engine.

Combustion engines are made to compress fuel/air mixture and not water. Water is considered incompressible when compared to air.

The combustion engine produces energy by an up-down movement of the piston. The piston compresses the fuel/air mixture along with a spark causing an ignition.

Water in the engine can disturb the function of the piston, causing it to try to compress water instead of air, which can result in significant damages to the driver.

The severity of the hydrolocked engine damage depended on the speed of the engine when water entered. In slow-moving drivers, the problem can be simply fixed by draining the water out of the cylinders. On the other hand, if the engine was moving fast, a complete replacement for the driver is needed.

Similarly, the cost of fixing a hydrolocked engine depends on the severity of the damage to cost either a couple of hundred dollars or up to $10,000

It is recommended to avoid driving in flooded roads, and if you had to, drive as slow as you can.