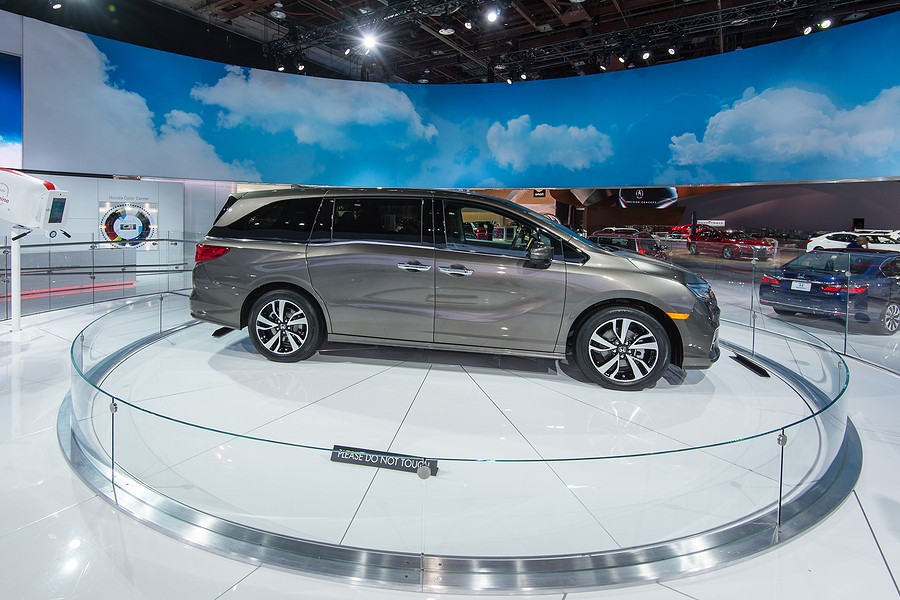 Honda has been making its Odyssey minivan since the 1995 model year. It has consistently been one of Honda's most popular models in their lineup with sales in North America topping 100,000 units every year since the year 2000. It was even Honda's fastest selling new car, breaking the record previously held by the Honda Civic. It has received Car and Drivers five best trucks and was a top pick minivan from Consumer Reports on more than one occasion. It's safe to say that as far as minivans go on the roads of North America, the Odyssey is one of the most recognizable and one of the most reliable.

Even though in surveys nearly 100% of Odyssey drivers have rated the handling of the Odyssey as above average, only about 50% gave it a good rating for the engine. The fact is, the Honda Odyssey has had a few engine problems over the lifetime of the vehicle burning question. As you might expect, any vehicle has been in production for 25 years would have some model years that perform better than others. With that in mind, we can take a look at which model years performed better than others, or what exactly might be going on if the check engine light shows up on the dashboard of your Honda Odyssey.

Few things are more frustrating than seeing the check engine light pop up on your dashboard. It's frustrating insofar as it means that there's something wrong with your Honda Odyssey, but it's also frustrating because it doesn't tell you exactly what the problem is. In fact, a check engine light on your Honda Odyssey dashboard could mean literally dozens of different things. Narrowing it down takes a little bit of effort. Of course, if you have an OBD2 scanner you can use that to determine the source of the check engine light error with much more accuracy, but not everyone has those. If you are interested in the inner workings of your Honda Odyssey at all, it may be worth buying an OBD2 scanner on your own just so you can be more informed about what's going on. You can get affordable ones on Amazon.com for around $30.

When the check engine light appears on your dashboard you have a range of potential problems that could be indicated by this. Let's go over some of the more common ones and see which ones tend to be more common than others in various years of the Honda Odyssey.

Part of your exhaust system, the catalytic converter is a necessary component for turning toxic fumes from the combustion reaction into less toxic fumes. It helps convert carbon monoxide into carbon dioxide, for instance. Sometimes when it fails it's just a matter of getting it cleaned, and sometimes you need to get it replaced. It's going to cost you between $850 and $950 to get a catalytic converter replaced in a Honda Odyssey.

Catalytic converter problems have popped up in a few different model years of the Honda Odyssey. The 2010 Odyssey for instance had a number of issues related to catalytic converter failure causing the check engine light to come on. Average repair costs for this were in the $800 range.

Your O2 sensor is used to measure the amount of oxygen in your car's exhaust that has not been burnt. This allows your computer to properly regulate the air/fuel mixture in the combustion reaction. If the O2 sensor goes off, you're going to end up burning more fuel than you should.

When the O2 sensor fails on your Honda Odyssey it will set off a check engine light. If you need a new one the cost of replacing it and in Odyssey is usually between $400 and $490. Though some owners of Honda Odyssey’s have had problems with their O2 sensor over the years, it's not been a particularly problematic issue in general. In 2005, 2006, and 2014 for instance there were some reports of problems with O2 sensors, but not in great abundance.

Spark plugs are a common part of an engine that most drivers are well aware of. They're also fairly affordable and easy to replace.  As the name suggests, the spark plug is what creates a spark that ignites the fuel and air mixture to create the combustion reaction that powers your entire vehicle. Spark plugs are prone to wearing out fairly commonly and that means they need to be replaced. When one is wearing out or has burned out completely you will get a check engine light warning in your Honda Odyssey. The cost of replacing a spark plug in a Honda Odyssey can range between $150 and $300. The cost of just getting the plug on its own Can be as affordable as around $8 on AutoZone.

Spark plugs go bad in every single vehicle, it's not unique to Honda or the Odyssey in particular. That said, some models of the Honda Odyssey were known to have more problems with their spark plugs causing the check engine light to go off than others. The 2011 Honda Odyssey was reported to have some problems for some drivers as did the 2012 Honda Odyssey and the 2014 Odyssey as well.

Blown spark plugs were a big problem for the 2005 Honda Odyssey, and overall, that was one of the worst years for the Odyssey across the board.

The mass airflow sensor tracks how much air enters the engine and if it's not functioning properly you're going to experience problems like rough idling, bad starts, poor gas mileage and engine stalls. The cost of replacing a mass airflow sensor in a Honda Odyssey is about $150 to $250. The 2003, 2004, 2008 and 2013 models have all had issues reported with their mass airflow sensors, but not in any extreme amount that would make this a stand-up problem for those model years. Still, the mass airflow sensor is subject to failure and we'll set off your check engine light if it is a problem.

The exhaust gas recirculation valve, or EGR valve, reduces toxic nitrogen oxides that are formed in your car's engine when it burns too hot and prevents them from being expelled as part of your exhaust. It does this by redirecting gases like CO2 from your exhaust back into the engine to lower the temperature in the combustion chamber. This valve can either get clogged and require a cleaning or fail out right.  What it does so, you're check engine light will go off. The cost of replacing an EGR valve in a Honda Odyssey is about $215 to $350.

EGR valves have caused issues with a few different model years of the Honda Odyssey including 2015, 2003, 2014 and some others. Again, it's not a super frequent problem but it has come up from time to time.

Your thermostat maintains the proper temperature for your engine. That means allowing coolant in when it gets too warm and cutting the flow of coolant off when it's too cool. If the thermostat gets clogged or damaged in some way, then it can neither get stuck in the open or closed position. That means your engine will be running too hot or too cold is depending on which way it was stuck. The cost of replacing a thermostat in a Honda Odyssey is usually between $120 and $170.

This is definitely not a problem that is exclusive to the Honda Odyssey, but it is also one of the most common reasons for a check engine light to show up on your dashboard. It's just one of those silly things that we sometimes overlook during your day to day driving around town and going to get gas. If you don't seal the gas cap completely until you hear that little click, then it will trigger the sensor that there's something wrong.  It may not seem like a big deal but you do want to make sure that your gas cap is sealed completely so you don't lose any fuel to evaporation, thus saving you some extra cash at the gas pumps.

In terms of engine issues that are likely to cause your check engine light to go off, there are some model years of the Honda Odyssey that stand up more than others. If you're in the market for getting an older Honda Odyssey, you may want to avoid these model years because they had some of the worst problems

This is arguably the worst year for the Honda Odyssey with his engine problems. Many drivers experienced engine mount failure, blown spark plugs, problems with the crankshaft breaking camshaft position sensors, oil leaking issues and more. Any of these problems could have led to the check engine light going off.

This was not a poor year for the Odyssey in general, but it did have more engine problems than many other model years have had. In particular, the problem with the 2010 model year of the Odyssey related to excessive oil consumption. The number of drivers reported problems with engine misfires and also problems with their computer.

This model year was also not too bad on average, but it did have some more engine problems than other model years. In particular, there were problems with excessive oil consumption and also the check engine light was known to come on without an adequate diagnosis for the problem.

In 2008 the Honda Odyssey was known to have problems with excessive oil consumption as other years have, as well as problems with the motor mounts and issues with the crankshaft. This model year had a problem with fuel pump covers that could crack and leak which was subject to a recall but that could also cause the check engine light to go off.

All things being equal this was an okay model year for the Honda Odyssey, but it did have the same problems with excessive oil consumption that other model years had which could have led to the check engine light going off. there is also a smaller issue reported with premature camshaft failure.  The same recall was prevalent in this year as a year before dealing with fuel pump covers that might crack and leak.

Overall, this was not the best year for the Honda Odyssey for a number of reasons, but it also had problems with the Engine That Could set off your check engine light. Misfires were common with this model year and the engine was known to stall every now and then.

As you’ve seen there were numerous potential reasons to set off a check engine light on your Honda Odyssey’s dashboard. Unfortunately, if you don't have an OBD2 scanner handy, then narrowing down which one of these reasons caused the light to go off in the first place is all but impossible unless you go to a mechanic.

Many drivers can be frustrated when they see the check engine light because it's so vague about what the problem is. The one thing that we can see based on all of the potential reasons is that many of them are fairly serious and do need to be dealt with. You don't want to ignore a check engine light for too long because a small problem could snowball into a much larger one and cost you a lot of money in the long run.

The Honda Odyssey is a reliable vehicle for the most part, and aside from the few model years we mentioned as being problematic, you shouldn't expect too many issues if you were to get one. That said, check engine light can go off anytime for any reason, so you always want to make sure you get it checked out as soon as you can to keep yourself safe on the road.