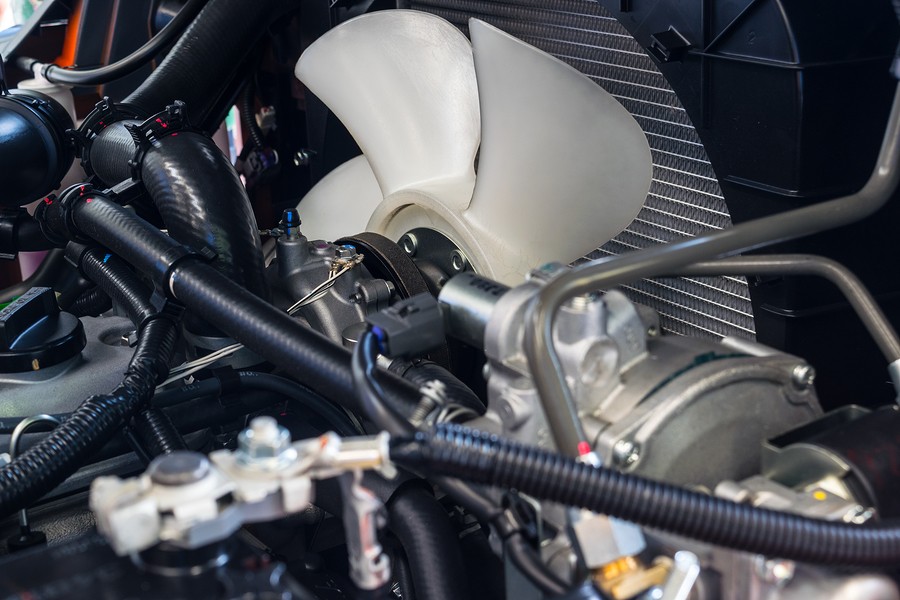 One of the most important parts of a vehicle's cooling system is the radiator fan. A radiator fan is usually directly connected to the engine and mounted in front or behind it, depending on whether it is an air-cooled or water-cooled engine.

The purpose of a radiator fan is to move air through the radiator and coolant fluid when they are hot so that it can be cooled off before being sent back into the engine.

Radiator fans are also known as auxiliary fans. Their primary function is not related to propulsion but rather cooling down fluids to keep them at optimum operating temperatures for better performance.

This article highlights the different types of radiator fans available for you to choose from and protect the cooling system in your vehicle. What is a Radiator Fan, and what does it do?

A radiator fan is part of the engine cooling system, mounted in front or behind the engine block. The purpose of a radiator fan is to move air through the radiator and coolant fluid when they are hot so that it can be cooled off before being sent back into the engine.

Here are the common types of radiator fans you'll find in the automotive market:

An electric fan is a radiator fan powered by the vehicle's battery via a dedicated fuse box in the engine compartment. It is designed so that when the coolant fluid temperature reaches a certain level, it automatically turns on to move fresh air through the radiator and cool it before being sent back to the engine.

Advantages An electric fan can start up faster than an engine-driven fan. This means that your car's engine will be cooled down almost instantaneously when the electric fan turns on. It also uses less power, extending how long your battery can last in idle conditions, such as when parked in your garage or driveway.

Disadvantages An electric fan is not as efficient when it comes to moving large volumes of air through the radiator because its blades are usually slim and short, which prevent it from creating much pressure at all (unlike engine-driven fans, which have longer but fatter blades). It's also more expensive and not as durable as engine-driven fans.

An engine-driven fan can move larger volumes of air, which makes it more efficient than an electric one at cooling down the coolant fluid in your vehicle's cooling system even when it's hot. It also has longer blades, giving them better pressure and durability for heavy-duty situations than electric fans, whose blades are usually short and slim (making them less durable).

An auxiliary fan is part of the engine cooling system but is not directly connected to the engine block. Unlike radiator or electric fans, this type of fan usually serves just one purpose, which is to create airflow around certain parts of your vehicle's coolant fluid system for greater cooling efficiency during heavy-duty operations such as under towage or off-roading scenarios.

They can create more airflow than engine-driven or electric fans, which makes them good at cooling down the coolant fluid in your car's engine faster than either of those types of fans. They are also more efficient than electric ones regarding their size and power usage.

Like a radiator fan, an auxiliary fan is not as efficient in moving large volumes of air because its blades are usually slim and short. It's also not as durable as an engine-driven fan because its components sometimes wear out quickly due to excessive heat from the coolant fluid.

How to choose the right radiator fan for your vehicle?

When choosing the right radiator fan for your vehicle, there are several factors to consider.

The price of a radiator fan usually depends on the type of fan it is. Electric fans, for instance, are more expensive than engine-driven ones because they are smaller and use less power. On the other hand, engine-driven fans cost more than electric ones because their blades are usually longer and have better pressure against air resistance.

A radiator fan's durability also depends on the type of fan. For instance, an engine-driven fan is more durable than an auxiliary one because its components (bearings and a slip ring) can handle high temperatures better than those in an auxiliary unit.

The size and power requirements of a radiator fan also depend on the type of fan it is. Electric fans, for example, need batteries to generate electricity. In contrast, engine-driven ones don't need batteries since they get their power directly from the vehicle's battery or alternator through wiring that connects them to the car's electrical system.

Auxiliary units are usually smaller than electric units but larger than engine-driven units.

The ease of installing radiator fans depends on the type of fan it is. Electric fans are usually easier to install than engine-driven ones because they can be installed almost anywhere in your vehicle.

On the other hand, Auxiliary units are not as easy to install as electric or engine-driven units because they have separate components that need to be mounted together before being connected to your car's electrical system. How do radiator fans work?

A radiator fan works by creating airflow around parts of your vehicle's coolant fluid system, which is beneficial for increasing its cooling efficiency during heavy-duty operations such as under towage or off-roading scenarios. The incoming air travels through the fan's blades, heated up. The hot air continues traveling through the fan's housing to get to its other side, which has cooler incoming air. This cools down the hot airstream enough to be sent back into the engine for more cooling purposes.

Tips on how to maintain your radiator fan

Fortunately, radiator fans tend to be low-maintenance items since they only need occasional cleaning and proper lubrication to keep them working as intended. However, there are some tips you can take note of for your radiator fan: How often should I replace the radiator fan?

Ideally, you should invest in a new radiator fan when your cooling system has deteriorated to such an extent that it would cost much more money and time for repairs than a complete replacement. This is because a major part of the car's cooling system usually involves the radiator fan, so a malfunctioning one can greatly reduce its efficiency.

Before hiring a professional mechanic, you can also take your car to a trusted auto center, where they can run a test on the cooling system for free. This way, it would be easier for you to determine whether your radiator fan needs replacement or not.

How to install a radiator fan?

If you're planning to replace your radiator fan, you can follow these steps: What are the five best radiator fans for vehicles in 2022?

if you're planning to purchase a higher quality radiator fan for your car, consider checking out these five best radiator fans for vehicles in 2022, along with their main pros and cons:

The PASSENGER COOLING FAN BLOWER MOTOR is manufactured by the leading supplier, CAR PARTS. This model features a 220-watt motor that can last up to 100,000 hours of use. In addition, it has a mounting bracket that can be easily fastened to your vehicle's engine compartment, and it also comes with a built-in clutch for easy installation.

The motor is very quiet, so you will not hear any annoying buzzing sound while driving. It operates smoothly and quietly as well, which means you won't have to deal with an inconvenient rattling sound every time you turn the fan on.

The switch becomes loose after some time, which means you will have to tighten it again to keep the fan working properly.

The SPAL 10″ & 12″ Variable Speed Electric Fan has a thermostatic control that lets you monitor the temperature of your car's engine. In addition, it features an adjustable mount to rotate it to direct the airflow where you need more heating or cooling.

The operation is very quiet, so you don't have to worry about annoying rattling sounds while driving. In addition, it's easy to install, which makes it perfect for those who are not too familiar with car mechanics.

The motor fails easily, so you will have to buy a new one if it malfunctions.

The Performance Radiator Fan Assembly is manufactured by the leading radiator fan manufacturer, SPAL. This model comes in three different sizes (6″, 8″ and 10″), so you can choose which one best suits your vehicle's needs. It also comes with adjustable thermostatic control and direct-drive flat motors built to last longer.

The motor works well, so you don't have to deal with annoying rattling sounds every time you turn the fan on. In addition, it's very easy to install, which makes it a good choice for those who are not too familiar with car mechanics.

The blades have a tendency to bend after several months, which means you will have to replace this radiator fan more often than other models on the market.

The SPAL 11″ 255-Watt Dual Fan has two cooling fans that direct airflow to both the front and rear of the engine. In addition, it features a thermostatic control for monitoring the temperature of your car's engine, as well as an adjustable mount for rotating it to where you need more heating or cooling.

The motor is very powerful, providing enough air circulation even during heavy-duty operations. The setup process is also easy, which means you will have this radiator fan up and running in no time.

The switch may stop working after some time, which means you will have to tighten it again to keep the fans working properly. Pros Powerful motor   Easy setup Cons Switch becomes loose View Product On Amazon

The OEM Replacement Radiator Fan Assembly is manufactured by the leading car manufacturer, GMC. This model comes with a direct-drive flat motor that can last up to 50,000 hours of use. It also features adjustable mounting hardware and weatherproof connectors to provide you with easy installation.

The fan works extremely well, so you won't have to deal with annoying rattling sounds every time you turn it on. In addition, you can easily replace this radiator fan without buying another one because of its competitive price range.

There are no dislikes about this radiator fan assembly model whatsoever!

If you're in the market for a new radiator fan, it's important to know the available different types. In this article, we've highlighted the three most common types of radiator fans- electric, engine-driven, and auxiliary. We've also discussed some of the pros and cons of each type so that you can make an informed decision when purchasing one.

If you need help installing or maintaining your radiator fan, don't hesitate to ask an expert for advice. And finally, if your current radiator fan is not working properly, don't wait until it's too late- consider replacing it as soon as possible.