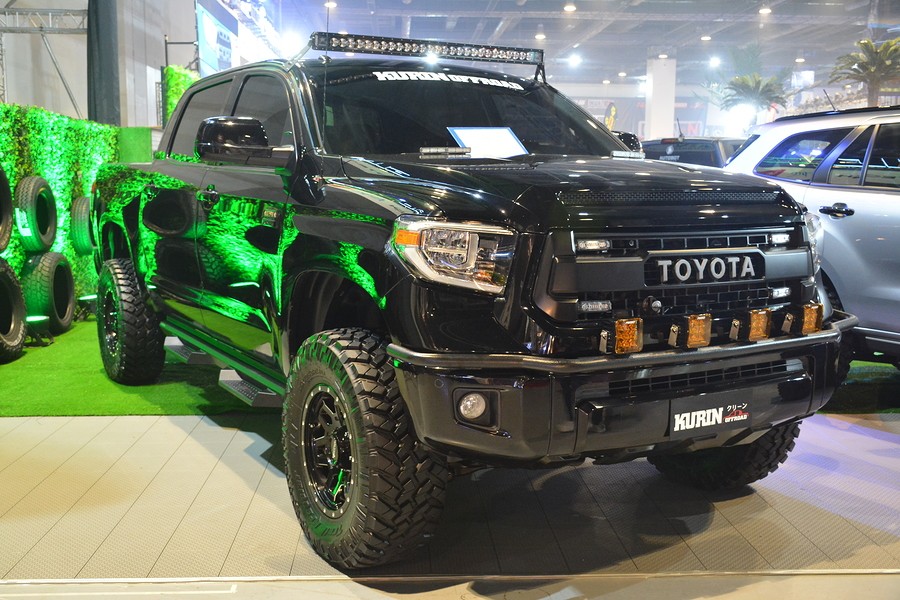 It’s time to pit the Toyota Tundra vs the Ford F-150. Ford sold over 900,000 F-150s in 2019. In fact, the F-150 has been the best-selling pickup truck in America since 1977 and the best-selling vehicle period since 1981. The truck dominates the market. But it’s not the only choice. Some people feel Ford isn’t always up to snuff and Toyota has a history of quality. In a head-to-head battle, which truck comes out on top?

As we mentioned, that's just with the one Ford engine that will give you the best results in terms of towing and payload. You can alter that significantly and with some engines and even get less towing and payload capacity than the Toyota Tundra depending on configuration.

Ford can't help but take the performance medal in this matchup though because of the engine and trim options it offers. Toyota's single engine option just can't hold off against what Ford brings to the table, especially when you look at the Ford F-150 Raptor. The Raptor comes with a 450-horsepower turbocharged V6 engine, improved suspension, all-terrain tires and a 10-speed automatic transmission vs the 6-speed of the Tundra. The F-150 Raptor is better at accelerating and handling rough terrain than the Toyota Tundra.

In the performance battle between these two trucks, the Ford F-150 wins.

Which Truck is More Affordable?

Toyota offers the Tundra in six different trim levels with the cheapest being the Tundra SR that starts at $33,575. Ford offers its popular F-150 with 7 trim packages, several cab options,  and the lowest price option starting at $28,745. It's worth noting also that when you shop for a Ford F-150 you can either pick from the seven available trim packages or, on Ford.com, they let you build your Ford with custom features. This is essentially making your own trim package and they price it accordingly. For that reason, you could argue that Ford actually has an eighth trim package that's unpredictable in its pricing.

Toyota has two of its six trim levels at the same price on the high end of the spectrum. You can get either the Tundra platinum or the Tacoma 1794 edition and both have an MSRP of $48,775.

Based just on sticker prices, the F-150 will start you off at a much better deal than the Toyota Tundra saving you nearly $5,000. However, if you go all in on the features the F-150 ends up being almost $20,000 more expensive than its closest Tundra competitor.

Average repair bills for the Toyota Tundra are the neighbourhood of $606 per year, according to Repairpal.com. The same data shows that the Ford F-150 can expect about $788 in repair bills per year.

The other big expense you can expect with any truck is going to be your fuel costs. That's harder to figure out at first than you might think because Ford actually offers 6 different engine options with an F-150 depending on how you configure it. For 2020, the Toyota Tundra just has one engine, although you can get it as either four-wheel drive or rear wheel drive.

The Tundra comes with a 5.7L V8 engine. It's capable of pulling 381-horsepower and provides 13 miles-per-gallon in the city and 18 miles-per-gallon on the highway for a combined gas mileage of 15 miles-per-gallon. That's actually lagging pretty far behind not just the Ford F-150 but most competition in that class.

When it comes to affordability, though the Ford F-150 is slightly more expensive on your average repair bills, when you compare the potential starting ticket price as well as fuel economy pretty much across-the-board the F-150 we use the Tundra in the dust. Ford F-150 wins.

Which Truck Has Better Features?

It's worth mentioning again here that Ford has six different engine options available compared to the Tundra’s single option. As well, when you're building your truck, Ford will let you have full control over how you put it together rather than just sticking to the available trim packages that they've made available. So, in terms of variety and ability to create the perfect truck for you, the Ford F-150 really excels. There's a reason that the F-150 has been the best-selling pickup truck in America for over 40 years now.

The Toyota Tundra offers you an 8-inch touch screen infotainment system along with Apple Carplay and Android Auto. Ford F-150 offers the same as well as more advanced camera options and a trailer assist system that Toyota doesn't have. Your F-150 also comes with 4G LTE and can be made into a Wi-Fi hotspot if you want it to be. Although neither truck has what you would consider a particularly luxurious interior, the F-150 has definitely been updated with better technology and features that make it look and feel newer and more exciting than the Toyota Tundra.

Higher and the trim levels of the Ford F-150 also come with things like leather interiors, Panoramic sunroof and even massaging seats. Because of the tundra hasn't been updated in about 14 years it's just lagging behind the F-150 in terms of the features that it has in the Creature Comforts that it can offer you behind the wheel. When it comes to the best features for your money, the F-150 wins.

Which Truck is Safer?

When you compare Insurance Institute for Highway Safety crash test ratings between the Ford F-150 and the Toyota Tundra, the Toyota does come out lacking. The Tundra's design is a little bit older these days, which is keeping it behind the times. The driver side crash test ratings score a marginal which is the second worst rating they could receive while the passenger side actually did receive the worst rating in the crash testing.

On the opposite end of the spectrum, the Ford F-150 is a top safety pick and has scored perfectly across the board in crash test ratings. It received a 5-star rating from the National Highway Traffic Safety Administration compared to the four-star for the Tundra as well.

Both the Toyota Tundra and the Ford F-150 come with adaptive cruise control, rear-view camera, automatic emergency braking, collision warning system with pedestrian detection, and the standard array of airbags you’d expect on any modern vehicle. Toyota has more standard safety features than the Ford F-150 Including things like blind-spot monitoring, front and rear parking assist, land departure alerts and more but the overall crash test ratings give Ford the edge on safety in this matchup.

Ford F-150 wins again with the safety match up, but this was arguably the closest one given the wide array of standard safety features that Toyota offers.

Which Truck is the Best Choice?

The Toyota Tundra has not had an update in several years at this point. Ford is always innovating with the F-150 because it is their flagship model. In fact, as of the year 2018, Ford was making $41 billion in annual income just from the F-150. As you can see it's in Ford’s best interest to heavily invest in making sure the F-150 is the best truck on the road. Essentially, it's unfair to expect that Toyota would even really be able to compete on the same level as the Ford F-150. Taking on the best-selling truck in America since 1977 is a tall order.

The Toyota Tundra is a good truck overall and when you compare trim packages, you can end up spending much more on an F-150 depending on how you put it together. Toyota’s Safety Sense is the standard safety package Toyota offers on all of its trucks and, as we said, it includes many more standard features than you'll find in a Ford F-150.

At the end of the day, the sheer variety that Ford offers you with those six different engines, the numerous trim packages, the performance and off-road capabilities of a trim like the F-150 Raptor for instance, and the ability to fully customize your own F-150 from the ground up really make for to stand out. Comfort features, the technology available, the performance and reliability of the Ford F150 just make it too hard to compete with.

Choosing a Toyota Tundra is by no means a bad choice for a truck and especially if you're not looking for a high-powered work vehicle which is a good segment of the F-150 market. At the end of the day it's clear that the best choice overall is the Ford F-150. Ford F-150 wins.