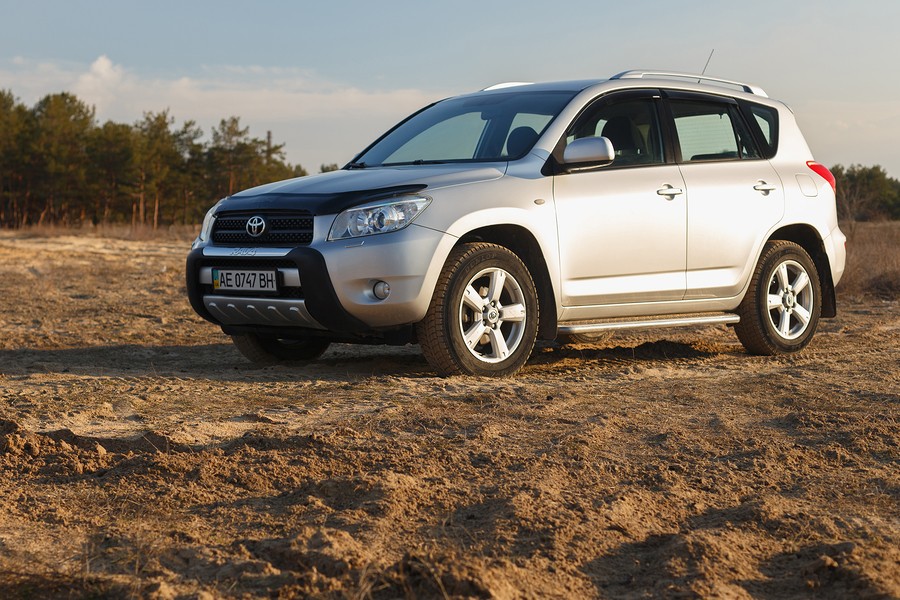 Toyota's RAV4 has been one of the most popular crossover SUVs since it was first introduced in the early 2000s. Still produced to this day they're generally maneuverable, sporty, and fun to drive as well as being relatively fuel efficient and roomy. That's not to say that the Toyota RAV4 doesn't have problems though. Any vehicle that's been produced for nearly 20 years is going to have some issues, and some years models have been much better than others. If you have a Toyota RAV4 or are looking to buy a Toyota RAV4 we can break down all the Toyota RAV4 problems year by year for you.

Let's start off with the 2005 model year of the Rav4. The vehicle has been available since the 1995 model year in North America. Going beyond 15 years to look at a vehicle may prove fruitless in terms of problems as, even if they were good when they debuted, those cars have likely developed other problems by this point due to age and use.

The 2005 model year was relatively problem free compared to some earlier and later models. The main problem in 2005 was excessive oil consumption and it’s worth remembering that as it has been one of the Rav4’s chief problems throughout many production years. Drivers have noted that, often between 75,000 and 150,000 miles the engine burns so much oil due to hard to find leaks that they’ll need to add more oil more than once per month.

The 2007 model year of the Toyota RAV4 was bogged down with massive engine problems reported by many drivers. If you're in the market for an older vehicle this is definitely something you're going to want to avoid outright because the cost of trying to upkeep and repair 2007 RAV4 is probably far in excess of what the vehicle is even worth at this point. Edmunds.com has the 2007 RAV4 listed as being worth just over $6,000.

Plagued by issues including steering problems and excessive oil consumption, a 2007 Toyota RAV4 has a laundry list of issues that you'll have to deal with if this is a vehicle you have or for whatever reason want to get. While the 2006 model had 11 recalls, this year had a whopping 14 which included the worst ones from 2006 plus a new recall about side airbags deploying unexpectedly. Overall, it's best to avoid this one.

According to Carcomplaints.com, the 2008 model year for the Toyota RAV4 is the worst year overall for this vehicle. Even though 2007s have many more problems by the numbers, the cost of repairing the issues in the 2008 model was much greater than 2007. For that reason, this is the model year you want to avoid most if you're looking to pick up a used one.

Fortunately at 12 years old not a lot of people are really going to be in the market for a 2008 model at this point so it is unlikely that you would take the time, effort, or money to invest in a 2008.

Strangely enough, one of the main problems reported with the 2009 Toyota RAV4 was regarding issues with the exterior paint peeling. Excessive oil consumption was reported in some models, but numbers have dropped considerably compared to previous years. The accelerator sticking was a problem that came up for some drivers and as we've seen there was a recall issued in previous years just for that reason.

Speaking of recalls, the 2009 Toyota RAV4 had a total of fifteen different recalls issued for it. For the most part these were the same recalls that have plagued the last few model years with the addition of a problem that caused the windshield wipers to stop working.

The same paint issues that plagued the 2009 RAV4 model year were present in 2010 as well. Several drivers have experienced bubbling and peeling paint on the exterior of their vehicle for no reason. On the more serious side, issues with unwanted acceleration caused by the gas pedal sticking down we're also a problem this year which is why a recall was issued for just that reason.

The 2011 Toyota RAV4 was as relatively problem-free as the 2010 model. This year also had the same body issues caused by paint peeling, bubbling or chipping for seemingly no reason whatsoever. The more serious issues were again fairly few and far between meaning that overall, aside from aesthetic problems this was not a bad year for the RAV4.

Toyota had still not fixed their paint problems with the 2012 model year. paint damaging easily or just coming off was reported by a lot of drivers and this model year also had a small butt significant number of brake issues as well. Some drivers reported that their RAV4 would surge when braking, or that the brakes didn't work at all.

There were only five recalls issued for the 2012 RAV4, a significant drop from the 15 recalls issued just a few years earlier. Some of these recalls were still serious however including the issue with the cut seat belt webbing, windshield wipers that would be inoperative, and a problem with the brakes which we've seen was a complaint for this model year.

Toyota only listed one small recall for the 2013 model year that affected just over a thousand vehicles and was related to the trailer light not working properly. That said the model year still has a lot of complaints from drivers relative to the previous year. The big problem for this model year was a new and unique one related to the navigation display on the dashboard. Many drivers noticed that when driving in peak sunlight the navigation display was almost impossible to see due to the glare from the light.

As with previous model years, many drivers noticed that the paint was still an issue in 2013. Some drivers also complained of transmission problems such as the vehicle shaking uncontrollably once it got to highway speeds. Others noticed that it would shake at low speed as well.

There were more internal accessory issues with the 2014 RAV4.  Several drivers reported issues with either the stereo or the infotainment unit not working properly. All things being equal that's a relatively minor complaint however it doesn't affect the overall safety of the vehicle. There was also a recall for possible loss of power steering for this model year,

The paint job continued to be a problem for some drivers in the 2015 model year of the RAV4. More significant were the complaints relating it to brake issues, such as the brakes clicking, squeaking, or not working at all.

Crash test ratings for the 2015 RAV4 were good overall except for passenger side. There have been several years in a row in which the RAV4 got poor ratings from both the insurance Institute for Highway Safety and the NHTSA for how the front passenger side handled crashes.

The 2016 model year of the Toyota RAV4 was not known to have many problems, although some drivers did complain of erratic cruise control. Brake problems have also been a concern for some drivers. That meant a brake pedal pressure problem for some and for others that meant that the vehicle tended to lurch and jerk oddly when the brakes were applied.

Another minor complaint that is popped up more than once for the 2016 Toyota RAV4 is that the trunk just won't open. Again, this isn't extremely common, but it has happened to more than one owner.

In general, the 2016 model year of the RAV4 was pretty good and relatively problem-free.

The low number of problems continued for the 2017 RAV4 model year. That's not to say that there were no problems, but there were compared to many other similar vehicles making the 2017 a pretty reliable choice. One of the most common problems with the 2017 model year related to steering. Several drivers reported that the vehicle tended to pull to one side or the other while they were driving, which could be a definite safety concern.

The other main concern with the 2017 Toyota RAV4 related to transmission problems. Several drivers noted that the vehicle would slip gears, or it would be difficult to shift gears while driving. There have also been reports of the 2017 RAV4 jumping gears on its own when you didn't want it to do that.

2018 was arguably the best year in recent memory for the Toyota RAV4. There had been very few problems reported this year. Those that were related to things like some internal electrical problems and minor brake issues. These are all statistically insignificant complaints though especially relative to some other years. Any vehicle model is going to have some problems for some drivers. That's an unfortunate reality of owning a vehicle but in general the number of complaints about problems with the 2018 RAV4 has been low.

If you're in the market for a used Toyota RAV4 you probably do well picking up a 2018 model. As with any car purchase, you do want to make sure you have it checked out by a mechanic first just in case

Unfortunately for RAV4 owners the success of the 2018 model year didn't carry over as much to the 2019 Toyota RAV4. Though it's not as bad as things were about a decade previously, the 2019 RAV4 is known to have transmission issues.

Several RAV4 drivers have complained that the 2019 model has a problem with hesitating or lurching at slow speeds, and sometimes slipping out of gear. If this is a serious enough issue with the transmission, having the whole system repaired can cost several thousand dollars. Now this does affect a minority of RAV4s but it's worth knowing that it could be a risk you're facing if this is a model year, you're interested in.

The other big problem with the 2019 Toyota RAV4 deals with the fuel tank. Many drivers have complained that they are unable to fill the fuel tank as the tank will read as full long before it actually is full.

The 2019 Toyota RAV4 has also been subject to four recalls. While some are relatively minor like the one that's about an incorrect load capacity sticker, there's also a major recall for engine coolant leaks.  A coolant leak could lead to a very serious issue in which the engine overheats and your entire car stalls out, so this is one that you need to get looked at. There's also a recall dealing with the backup camera not always functioning properly, which could also be a safety concern.

Is a Toyota RAV4 Worth It?

As you can see going year by year, there are of course problems with the RAV4 that pop up with each model. But you do need to remember that this is going to be true of literally every vehicle on the market. No model year is perfect, and sometimes random problems occur. The RAV4 has proven to be a reliable vehicle, particularly within the last 5 years or so. There are clearly some model years that are less plagued by problems than others so if you're interested in getting a RAV4 just make sure you're doing your homework and making the choice that's best for you and your needs.