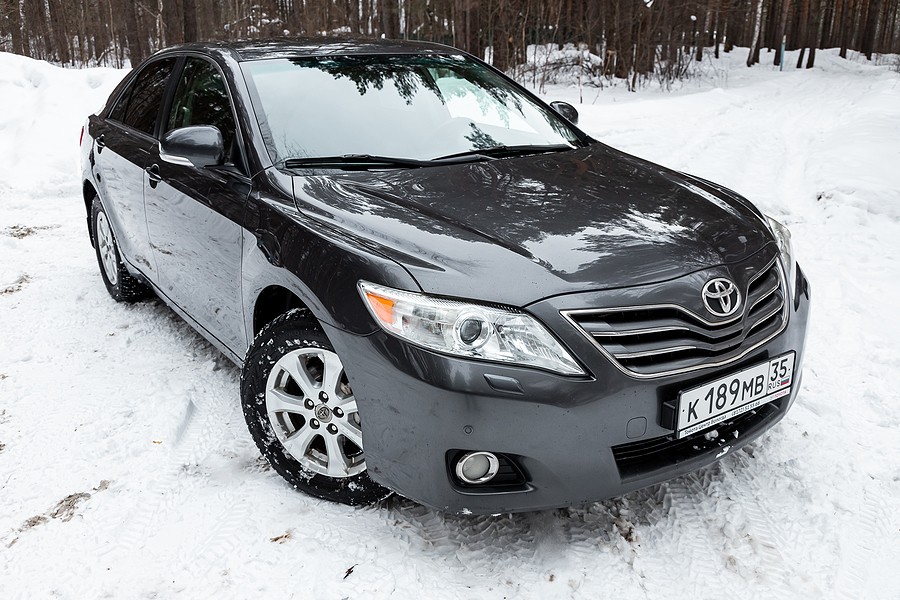 The Toyota Camry has been in production since 1982 and has gone through many changes over the years, even changing size from a compact car to a midsize. The Camry is one of the best-selling cars in automotive history. In fact, it was the best-selling passenger car in the United States from 1997 until 2016. It routinely sells over 400,000 units per year.  Clearly, that means the Camry is a popular car, and if you want to maintain and enjoy yours you need to keep up with scheduled maintenance which includes the timing belt. With that in mind let's check out the timing belt replacement cost for a Toyota Camry.

How Much to Replace a Toyota Camry Timing Belt?

The cost of replacing the timing belt in your Toyota Camry is going to depend on the year of your car as well as where you take it to get the job done. You can expect that you're going to have to pay probably between $440 and $900 to get your timing belt replaced. Obviously, that's a big range, and whether you take it to a mechanic or a dealer to get the job done will definitely have a big impact on this cost. Dealers do tend to charge more for this kind of repair and maintenance work than a mechanic will, and even if you get quotes from three different mechanics you might get three greatly different numbers.

You can head to AutoZone and see that a replacement timing belt for your Toyota Camry can cost you anywhere between $10 and $180. Now the reason the replacement is going to cost so much when you go to a mechanic is because of the labour that's involved in the job. As cheap as the belt itself is, and really a timing belt is just a composite rubber belt with some teeth on the inside, the labour is going to be several hours worth of work.

In order to gain access to the timing belt in your engine a mechanic is going to have to remove several parts. The timing belt is deep in there and it's an intense job to get to it. That's why we don't recommend trying this repair job on your own at home unless you have some extensive experience working on the engine of your Camry. If you're new to home auto repair, and you haven't done many hours under the hood of your car yet, you don't want to start with this one. We feel it's best to leave this to professionals until you've got some more skill doing this kind of repair work.

The timing belt in your Toyota Camry's engine is responsible for ensuring that the precise and synchronized timing of all the parts of your engine is kept in check. If you didn't have a timing belt at all, you simply wouldn't have a functioning engine. And if your timing belt is damaged then it can throw off your engine timing which can result in serious performance issues for your Camry.

The belt itself is very similar to other belts that you'll find in your engine, like the serpentine belt. The big difference between a serpentine belt and a timing belt is the way it looks. A serpentine belt is a long, smooth sided belt. The timing belt however is smooth on one side but has notched rubber teeth on the other side that allow it to grip the gears of your camshaft and your crankshaft.

As the crankshaft rotates and causes the pistons to rise, the camshaft will rotate and allow the valves at the head of your cylinder to open as well. The pistons can rise through the open valves, the fuel and air mixture can be injected into the combustion chamber of your engine, and your spark plug is then able to ignite it causing an explosion that forces the piston back down. This happens in every single cylinder of your engine hundreds of times per minute. That's what allows a combustion engine to produce the power necessary to make your car move.

Does my 2020 Toyota Camry Have a Timing Belt?

When Do I Replace a Toyota Camry Timing Belt?

If you have a Toyota Camry that still has a timing belt, which means it was either made between 1990 to 2001 or it's a V6 that was made up until 2006, then Toyota recommends you have your timing belt changed every 60,000 miles. Obviously at this point in 2021, if you're driving one of these older models your timing belt should probably have been changed several times by now. It's possible that the time to get it changed is coming around again so you definitely want to know the timing belt replacement cost for a Toyota Camry.

When your timing belt is no longer functioning the way that it's supposed to there are a few signs and symptoms that you could be on the lookout for to let you know there's a problem. These will occur sometimes even before the scheduled maintenance deadline has been met. If you notice any of these issues, do yourself a favour and get to a mechanic as soon as you can. The longer you let a bad timing belt go, the greater the risk that you're going to cause serious and extensive damage to your engine.

One of the biggest problems of a poorly functioning timing belt is that it can cause your engine to misfire. If the teeth wear off the belt and it begins to slip from the gears, or it's just stretched out and unable to maintain tension any longer, what happens is the timing of your engine will be thrown off. That can lead to things like the combustion reaction happening at the wrong time or not at all. If that's the case you're going to have an engine misfire. It causes a severe performance drop in your Toyota and could also cause damage to the engine as well.

If the teeth on the inside of your timing belt begin to break off, they can fall down to the oil pan beneath your engine. Over time they're going to end up blocking the oil pan so that oil is not able to flow properly any longer. That can lead to things like your engine overheating and eventually seizing up on you.

Additionally, it's possible that the bolts that hold the timing belt cover in place will come loose and begin leaking oil as well. The oil can contaminate the belt and cause it to slip loose or wear out sooner than it should. You may notice oil leaking into your engine bay, and beneath your car if this is happening.

The sound of a failing timing belt is distinct when compared to other noises that your engine produces. You will notice a ticking sound coming from your engine when the timing belt is failing, and it will increase in pace as you accelerate. The sound is rapid and repetitive and is not unlike the spinning of a roulette wheel.

You may also hear some intermittent squealing sounds if you're having a problem with your timing belt, but these are not as common as the ticking sound. Also, a squealing sound is much more likely to be caused by a faulty serpentine belt than a timing belt so you should definitely check out both if you hear that sound.

If  the gears at the end of your  camshaft and crankshaft get some of the teeth from the timing belt stuck in them, that can cause your engine to jerk and surge. This will cause your vehicle to shake and vibrate even when you're just sitting still in the car with the engine running. This rough idling can cause engine damage over time.