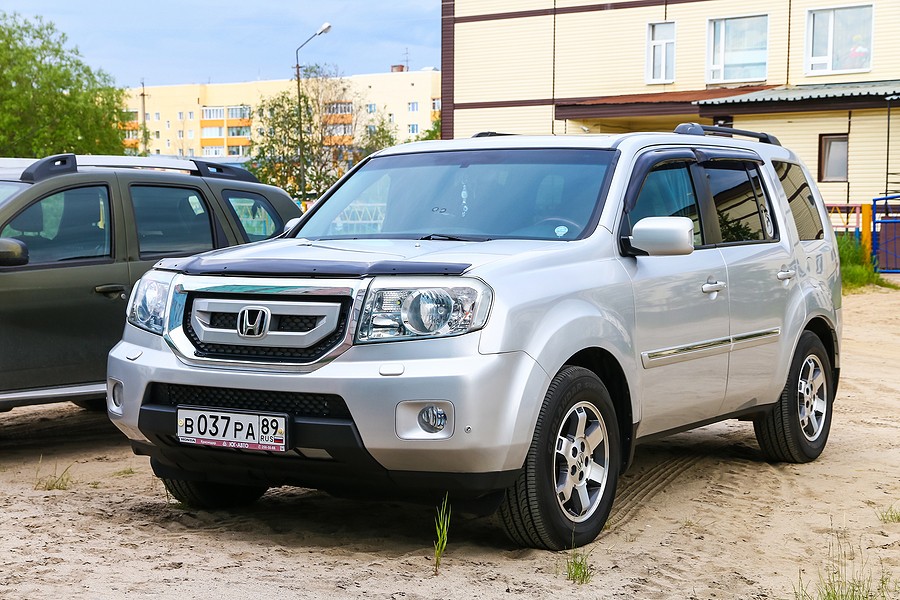 The Honda Pilot is a crossover minivan that Honda has been manufacturing since the year 2002. Kelley Blue Book routinely names the Honda Pilot as one of their Best Buys, and it has also been acknowledged as a top safety pick from the IIHS and others. Part of keeping your Honda Pilot working the way you want it to is making sure you're keeping up with routine maintenance. That includes things like replacing the fuel filter, changing your oil, and following Honda’s guidelines for when you need to replace your timing belt. With that in mind let's take a look at the timing belt replacement cost for your Honda Pilot.

Although many models of Honda vehicles have timing chains, if you have a Honda Pilot then you have a timing belt installed. According to Honda’s schedule for maintenance, you're going to need to get that belt replaced every 105,000 miles or 7 years. The cost of getting your timing belt replaced in the Honda Pilot is going to set you back typically between $700 and about $950.

If you go to a dealer to get your timing belt replaced it's likely to be more expensive and can potentially cost you over $1,000. If you head to AutoZone to get the timing belts on its own, the part will cost you typically between $30 and above $200. The disparity between the cost of the part and the cost of the entire repair job is of course the labour fees associated with it. Getting your timing belt replaced is, unfortunately, a labor-intensive bit of maintenance. It's going to take your mechanic a few hours to get this job done and that's where the excessive cost comes in.

It's always possible that you can handle this repair job on your own at home to save some money, but this is only recommended if you already have some skill doing engine repairs on your Honda Pilot. This is by no means a beginner repair job and if you haven't done a lot of work under the hood of your Pilot, we don't recommend starting with a job like this. It's best to leave it to the professionals to ensure it gets done the right way.

As the crankshaft in your engine turns, the pistons will rise into the cylinders of your engine. That motion causes the camshaft to rotate, allowing the valves to open at the heads of your cylinders. As the pistons rise towards the valves, the fuel and air mixture will be injected into the combustion chamber where your spark plug is able to ignite it. After ignition the small explosion it creates will force the piston back down again. This reaction happens over and over again many hundreds of times a minute in every cylinder of your engine. The pumping of the pistons keeps your crankshaft moving in that motion in turn is translated into the forward motion used by the wheels of your car.

If anything were to go wrong with the timing however, this entire process would be jeopardized. If your timing belt is wearing out because it's stretched or the teeth are falling off, then the camshaft and a crankshaft will no longer be properly synchronized. That means the valves will potentially be closed at the wrong time, and your combustion reaction will be happening incorrectly or not at all. The result of that is engine misfires and if the timing belt breaks completely then the camshaft will cease to rotate but the crankshaft will not.

If the crankshaft continues to rotate when the valves are not able to open because your camshaft isn't moving, then the pistons will crash into the closed valves. This can cause serious damage to the pistons, the valves, and the cylinder heads. It could be severe enough that you may need an entire engine rebuild or replacement which could cost you upwards of $4,000 to $5,000 or more. As you can see, maintaining your timing belt is essential to keeping your Honda Pilot running properly.

Do Honda Pilots Have Problems with Their Timing Belts?

In 2019, Honda issued a timing belt recall for several different models they produce. Among them was the 2018 and 2019 Honda Pilot. According to the recall, about 94,000 vehicles were affected and suffered serious problems with how the timing belt was manufactured. There was a manufacturing error which caused some of the timing belts not to be strengthened properly during the vulcanization process. That meant that the teeth on the inside of the timing belt were weak and had the potential to break away from the belt far more easily than they should have. That led to incorrect timing and belt slipping off the gears. In turn, that could have led to your engine is shutting down and causing an accident or severe engine damage.

Honda was recalling the vehicles for a free inspection and replacement if the belts were found to be incorrectly manufactured. If you have a 2018 or 2019 Honda Pilot and didn't get a notice from the company, you can call them directly and find out if your particular model is subject to the recall. You could also check the website www.recalls.Honda.com to see if your vehicle is affected as well.

Aside from this recall, there have not been any serious problems with timing belts in the Honda Pilot for other model years. Obviously there have been intermittent complaints, the kinds of things that pop up randomly for unlucky drivers, but nothing that rises to the level of a problem across an entire model year that you should be aware of in order to avoid.

It's possible that the timing belt in your Honda Pilot will wear down before scheduled maintenance requires it to be changed. If that does happen there are few symptoms if you can be on the lookout for to let you know you have a problem. That way you can get it changed before it breaks and causes some serious damage while you're driving.

Because there are teeth on the inside of your timing belt, when it starts to wear out, and especially as those teeth get worn flat or even break off, you're going to experience a distinctive ticking noise while you're driving. The pace of the noise will increase as you accelerate in your vehicle. It sounds kind of like someone is spinning a roulette wheel and it will be a constant, uninterrupted noise. This is one of the clearest signs that you have a problem with your timing belt as there is nothing else in your engine that will make the same noise when it goes wrong.

In addition to the ticking sound, you may also hear a squealing noise from time to time. Typically, this is a sound associated with another drive belt wearing out, like your serpentine belt, but it's possible your timing belt can also make this sound. It will not be as frequent as the ticking sound if it happens at all.

When your timing belt isn't functioning properly it's not able to maintain the precise timing of your engine. When that happens your combustion reaction will not be occurring when it needs to, sometimes it won't even happen at all. When that happens, you’ll experience engine misfires. The result of an engine misfire is that the cylinder doesn't fire correctly, and your vehicle loses power. If it happens enough times, especially in more than one cylinder, you're going to end up having the engine stalling out on you. That can potentially lead to accidents.

Rough idling is what you call it when your engine seems to vibrate and shake for no discernible reason, even when you're just sitting still with the engine running. This is a result of those teeth falling off of your timing belt and jamming up the gears, causing the engine to jolt and shake. This can also lead to issues with misfires and engine stalls eventually.

It's possible that oil can start leaking from the bolts that secure the cover over your timing belt over time. This oil can contaminate your engine bay and can also get on the timing belt itself causing it to wear out. In addition, you may suffer problems with bad oil pressure if pieces have broken off your timing belt and fallen into the oil pan. That's going to lead to problems with your engine overheating and seizing up on you if it's allowed to go on for too long.