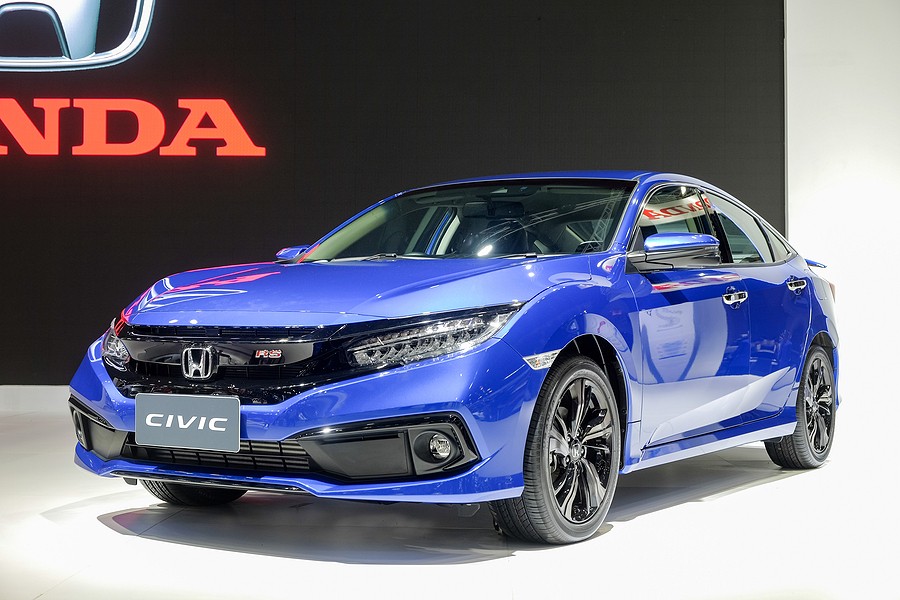 The Honda Civic has been in production since 1972. It's not just one of Honda's most popular models, it's actually the sixth best selling car of all time. It's also the fastest front-wheel drive car in the world, which is why you will see Honda Civics that have been modded out to be street racers quite often. If you want to keep your Honda Civic performing as well as it can you need to make sure you're keeping up with regularly scheduled maintenance. That means things like changing your oil, your fuel filter, and your timing belt. Fortunately, most drivers of a Honda Civic don't have to worry about this. From 2006 onward all Honda Civics have been manufactured with a timing chain instead of a timing belt. However, if you have a 2005 or earlier model of Honda Civic you do have a timing belt and it's going to need to be properly maintained. With that in mind let's take a look at the timing belt replacement cost for a Honda Civic.

According to Honda’s recommendations, if you have a Civic that was made between 2001 and 2005 you need to replace your timing belt every 110,000 miles, which is about seven years worth of driving. If your Civic was made from the 2000 and before then they recommend 105,000 miles. Now that it's 2021, there's a good chance your engine should have gotten to the point where you had the timing belt replaced a couple of times already. It may even be time to do it again.

Unfortunately, getting a timing belt replaced in your Honda Civic is not the cheapest maintenance job that you're going to be paying for. In fact, replacing the timing belt in your Civic could cost you anywhere between about $280 and $780, and even higher if you go to a dealer to get the job done. A mechanic might charge you a little bit less, but it's still going to be a pricey repair.

The reason replacing a timing belt costs so much money is that it is a labor-intensive job. The timing belt itself is not going to be all that expensive. If you head to a site like AutoZone, you can get a timing belt for a Honda Civic for anywhere between about $15 and $100. The rest of the cost is made up in labour because accessing a timing belt takes a few hours of a mechanic's time. It's located deep in the engine and they're going to have to remove several parts to gain access to it.

It's possible that you could replace your own timing belt at home, but you really need to be comfortable working under the hood of your Honda before you try to do this job on your own. If you haven't done many engine repairs in the past, you probably want to leave this one to a professional. It's not a beginner's repair job by any means.

There are numerous moving parts in the engine of your vehicle that have to be exactly synchronized in order for it to function properly. If the timing is off even by a fraction of a second, then your engine may not work at all. Your timing belt is responsible for maintaining the synchronization across many parts of your engine. It's looped over the end of your crankshaft and your camshaft so that as your crankshaft rotates, the camshaft will rotate with it.

The pistons that are attached to your crankshaft will rise into the cylinders of your engine. The camshaft, rotating in synchronization with the crankshaft, will then cause the valves at the heads of your cylinders to open allowing the pistons to pass through. The fuel and air mixture will be injected into the combustion chamber of your engine and your spark plug is going to ignite it. That ignition then causes a small explosion which forces the piston back down again. This happens in every cylinder of your engine over and over again and at an extremely fast pace. This is what keeps your crankshaft turning and that motion is then translated into the forward motion that allows the wheels of your vehicle to move and makes it so you can drive your Honda Civic where you want to go.

If the timing belt is worn out or the teeth on the inside of it aren't able to grip the gears on the camshaft and crankshaft correctly, then the precise timing of your engine is going to be off. That's going to cause serious performance problems, potentially to the point of your engine misfiring or stalling as a result. If your timing belt breaks completely, your engine would cease functioning and the damage it causes could be severe.

When a timing belt breaks, the camshaft stops rotating but the crankshaft will not. The pistons will continue to rise in the cylinders and crash into the valves that are not open. That's going to damage both the pistons and the valves, and potentially the cylinders and cylinder heads as well. If you're driving at highway speed, this could cause a catastrophic engine failure. The resulting repairs could end up costing you $4,000 to $5,000 or even more.

Do Honda Civics Have Problems with Their Timing Belts?

If you own a Honda Civic, you're pretty lucky in terms of how you have to deal with timing belt problems. Since most models now have timing chains which perform the same function as a timing belt but are made of much more durable metal that's meant to last the life of your Civic, they are rarely plagued with issues and don't require the same scheduled maintenance.

If you do have an older model Civic that has a timing belt, then your chief concern is just sticking to the maintenance schedule. If you bought yours used and you're not sure when the timing belt was replaced last, then you should definitely get to a mechanic and have them take a look at the belt for you. If the teeth are wearing down, or there are cracks in the material then you'll probably want to get a new belt just to be safe.

The Honda Civic never reported any serious issues with timing belts, certainly not in a way that made it a standout as an issue for the vehicle. There's always a chance of some isolated problems, but they are certainly not standard for the model.

It's possible that the timing belt in your Honda Civic will fail before the scheduled maintenance time has arrived. If it is starting to go bad on you there are some signs and symptoms you could be on the lookout for to let you know there's a problem. If you are experiencing these, you should get to a mechanic as soon as you can. That way you will save yourself some money by fixing the problem before it causes serious damage to your engine.

If the teeth begin to wear off of the inside of your timing belt and break off, it's possible they're going to fall into the oil pan at the bottom of your engine bay. This can cause problems with your oil pressure as they clog the pan. Poor oil pressure can lead to your engine overheating and potentially seizing up on you.

In addition, oil could start leaking from the bolts that secure the timing belt cover in place. When that happens, the oil may pool under your Honda Civic in the driveway where you park it. Additionally, the oil could get on the timing belt itself and cause it to slip off or wear down much sooner than it should.

A failed timing belt produces a sound that is unlike the noise you’ll get from something like your serpentine belt when it fails. Most belts produce a high pitch squealing sound when they are not working properly. It's possible you may get that sound intermittently from your timing belt when it's not working properly, but the more common noise a timing belt makes is something like a fast-spinning roulette wheel. The ticking sound will become faster as you accelerate your vehicle.

When the timing of your engine is not functioning the way it's supposed to, you can suffer some engine misfires as a result. This happens when your combustion reaction occurs at the wrong time or even not at all. It's going to cause a decrease in performance from your vehicle and can potentially lead to your engine stalling on you as well, not to mention damage to the cylinders and valves.

You may notice that your vehicle is shaking and knocking even when you're sitting at a standstill. This rough idling is caused by your timing belt wearing down and slipping on the gears that it's attached to. If the teeth break off of your timing belt, they may jam up the gears, and cause some serious engine jolting.

PrevPreviousUsing Craigslist To Sell A Car – Check Out Why Cash Is “King” When Selling!
NextTiming Belt Replacement Cost for a Honda Pilot Next