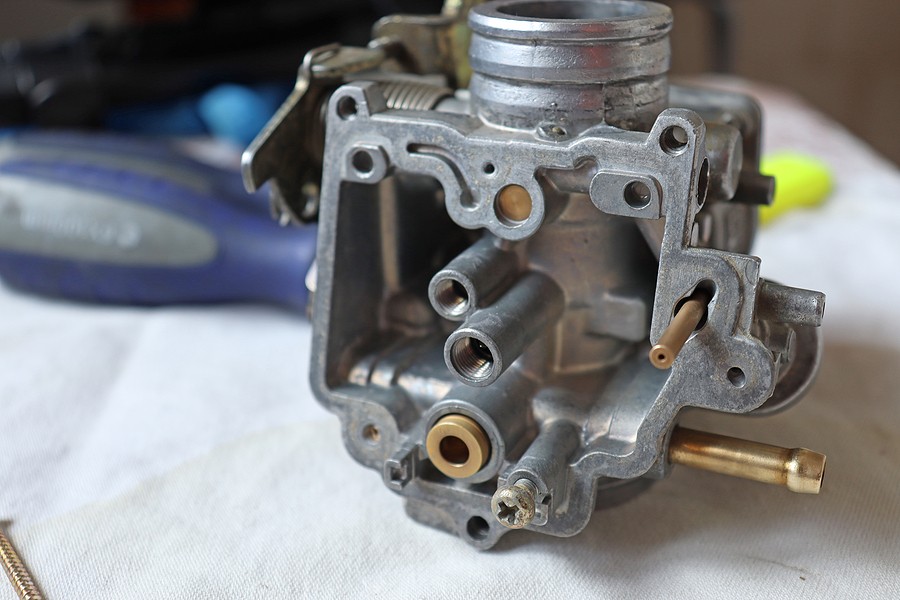 A carburetor is a mechanical device that combines fuel and air together into a perfectly balanced mixture that can be fed into the engine to create an internal combustion. While newer vehicles are no longer equipped with carburetors, they can still be found on many older vehicles. The carburetor is the component directly responsible for providing fuel-air mixture needed for the engine to run. It is one of the most important components on any vehicle equipped with one. Any issue with it can greatly affect the overall performance on the vehicle. Typically, a worn or busted carburetor will show a few symptoms that will serve as warning signs that it is needing attention.

Engine overheating and backfiring are also considered common symptoms of a potential trouble with the carburetor. If the carburetor has some kind of issue that results in it delivering a lean mixture, a fuel-air mixture containing a relatively low proportion of fuel, it may result in engine overheating or backfiring. Not only it causes overheating or backfiring, lean mixtures are bad for engine performance too and in more serious cases can cause serious damage to the engine as well.

One of the early symptoms commonly associated with a bad or failing carburetor is a reduced engine performance. The carburetor is the main component in charge of metering and delivering the air and fuel mixture needed for the engine to run. So when an issue arises, it can mess up the mixture and affect the performance of the engine. A bad carburetor can cause the engine to display sluggish acceleration, and a recognizable power reduction and fuel efficiency.

Another symptom commonly associated with a bad carburetor is hard starting. The carburetor is responsible for blending and metering—maintaining the right air-fuel ratio, which is really important and sensitive during cold starts. If the carburetor encounters any sort of issue that messes up the air-fuel ratio, it may result in hard starting. Depending on the nature of the problem, the vehicle may be hard to start, and get better as the engine warms up, or it may also be hard to start even when warmed up.

Although they are no longer widely used, carburetors can still be found under the hood of many roadworthy cars and trucks, and are very important in securing drivability and performance of the vehicles equipped with them. If your carburetor is showing any symptoms of wear and tear or you are under the impression that your carburetor may be having issues, then have the vehicle checked and properly diagnosed by a professional technician, such as one from your trusted service facility or  repair shop, to determine if your car requires a carburetor service or replacement.

Here is a list of ways on how to diagnose and repair your carburetor problems:

A stubble or misfire that takes place when the engine is under load can be due to a faulty power valve inside the carburetor, is called a hesitation. A carburetor uses an intake vacuum to pull fuel through its metering circuits. When engine load rises and the throttle opens wider, intake vacuum drops. This can decrease the flow of fuel that can result in the fuel-air mixture going lean, so the power valve has a spring-loaded vacuum-sensing diaphragm that opens to shoot up fuel flow when the vacuum drops. If the diaphragm has failed or the valve is obstructed with fuel varnish deposits or with dirt, it must be replaced.

A brand new power valve usually comes with a carburetor rebuild kit. Hesitation or misfiring under load can also be due to a weak ignition coil, or cracks in the coil or disrupted cap, and sometimes due to bad spark plug wires.

If the idle speed is not set high enough, the engine can stall when cold. It may also stall even if it has warmed up if the idle speed is set too low, if the fuel is contaminated with water or too much alcohol, or if there is insufficient fuel pressure to keep the carburetor bowl filled. Adjusting the fast idle, regular idle speeds and idle mixture adjustments can usually fixa hot or cold stalling problem.

A rough idle state is most of the time due to an excessively lean fuel mixture that results in lean misfires. The common cause of idle problems is air leaks between the carburetor and intake manifold, air leaks in vacuum lines or the EGR valve or the PCV system. Other carburetor related causes include an idle mixture adjustment set too lean which can be resolved by backing out the idle mixture adjustment screw one quarter of a turn at a time until the idle quality gets better. Another carburetor related cause is a dirty idle mixture circuit which may need cleaning and rebuilding of the carburetor.

Other possible causes of a rough idle, although not that common, include a malfunctioning charcoal canister purge control valve that is not closing and leaking fuel vapors back into the carburetor. An excessive compression blowby, weak or broken valve springs, or ignition misfiring because of dirty or worn spark plugs, bad plug wires or a weak ignition coil are also considered as causes of a trough idle.

This is a type of idle issue that is usually due to automatic choke. If the choke is only sticking slightly,  and it is not taken care of right away, the dirt can build up until the choke is stuck solid. It is a good idea to check the choke and the choke linkage, and clean or repair as needed.

There is a separate fast idle adjustment screw on the choke linkage that regulates engine speed while the engine is warming up. The tip of the screw rests against a cam that gradually rotates as the choke opens during engine warm up. Turn this screw counterclockwise to lessen the fast idle speed. However, to increase the fast idle speed, just turn the screw clockwise.

This problem is an issue that most of the time the carburetor is at fault but it is not always the case. If dirt goes into the needle valve and prevents it from closing, it may cause the carburetor to flood. If this problem is not fixed as soon as possible, with no way to shut off the flow of fuel, the bowl overflows and spills fuel into the carburetor’s throat or out of the bowl vents. If an engine is flooded, it may not start due to the plugs being wet with fuel.

Flooding can also occur if the float inside the fuel bowl is set excessively high or develops a leak and sinks. In this case, all that is needed is a new float—no need to replace the entire carburetor. Rebuild kits do not include floats, so if new gaskets are also required, a rebuild kit has to be purchased too.

Excessive fuel pressure can also cause flooding since it forces the fuel past the needle valve. In some instances, flooding may also be due to excessive heat. A hotspot under the intake manifold, created by a heat riser on a V6 or V8 engine that is stuck solid, can cause  the fuel in the carburetor bowl to boil over and flood the engine.

Caution: Flooding can be very hazardous since it can create a serious fire problem if the fuel spills out of the carburetor on a very hot engine.

Should You Rebuild Your Carburetor

If you are under the impression that your carburetor needs work, attend to it as soon as possible. It can be rebuilt with a kit or replaced with a new or refurbished carburetor. Replacing a carburetor can be really expensive, and may cost from $200 to $600 or more depending on the type and application of the carburetor.

It is a relatively simple job to clean and rebuild an older single or two barrel carburetor. However, it can be really difficult to clean and rebuild a four-barrel type. More difficult carburetors may require the skills of an expert or even a professional mechanic. Most of the time, it is easier and less risky to replace a more complicated carburetor than to try rebuilding it. If your carburetor is either of these, variable-venturi or electronic feedback controls and tamper-resistant adjustments, might as well consult an expert.

If your carburetor has worn throttle shafts that are leaking air, damaged, or any if not all of the castings are cracked, the carburetor must be replaced since it cannot be rebuilt. If this is the case, the only remedy here is if you have a second carburetor that you can salvage and dismantle for parts to use and repair the first one.

To either rebuild or replace a carburetor, you have to identify it first. Typically, there is a small metal ID tag on the carburetor that will provide you all the details that you need like the exact model number and calibration of the unit to find the correct carburetor kit or the replacement carburetor.

Gather your parts on a clean work bench, metal tray or paper. Take note on how the parts came apart so you know how to reassemble them when you put the carburetor back together. Make sure not to lose the small check balls.

Use carburetor cleaner or solvent that won’t cause any damage to plastic and soft metals. Make sure to wear rubber gloves to prevent skin contact with the solvent or cleaner. Do the cleaning according to instructions and make sure to do it in a well ventilated area to avoid breathing fumes.

Inspect if there is a worn throttle shaft. A throttle shaft hole that is worn allows air to be sucked in past the shaft leaning out the fuel mixture. To fix this issue, remove the throttle shaft, drill out the hole to oversize and then install a steel or brass sleeve to regain normal clearances.

Another issue to check is a bad float inside the fuel bowl. For brass floats, shake to check if there’s liquid inside. A tiny hairline crack in the seam lets fuel penetrate into the float causing it to sink then flooding the engine with too much fuel. For plastic floats, the problem arises when they soak up fuel over time causing the float to ride too low in the fuel bowl and flooding the engine with fuel. Replacing a bad float with a new one would fix the issue.

Before installing a new gasket under the carburetor, clean the mounting surface on the intake manifold (No dirt or gasket debris should get inside the manifold).

Do not reuse the old gasket since it almost always leaks! You can apply a gasket sealer to lessen the chance of air leakage, but never use RTV silicone as it dissolves when it gets in contact with gasoline.

Be cautious not to cross-thread the fittings upon reconnecting the fuel line and any other fittings (EGR, PCV) to the carburetor. Never over-tighten since it can strip the threads in the soft casting.

Have a new fuel filter installed to protect the carburetor from dirt.

Check twice all the vacuum and emission hose connections, fuel line, the throttle linkage and return spring. Start your engine. Recheck again for any other issues or leaks.