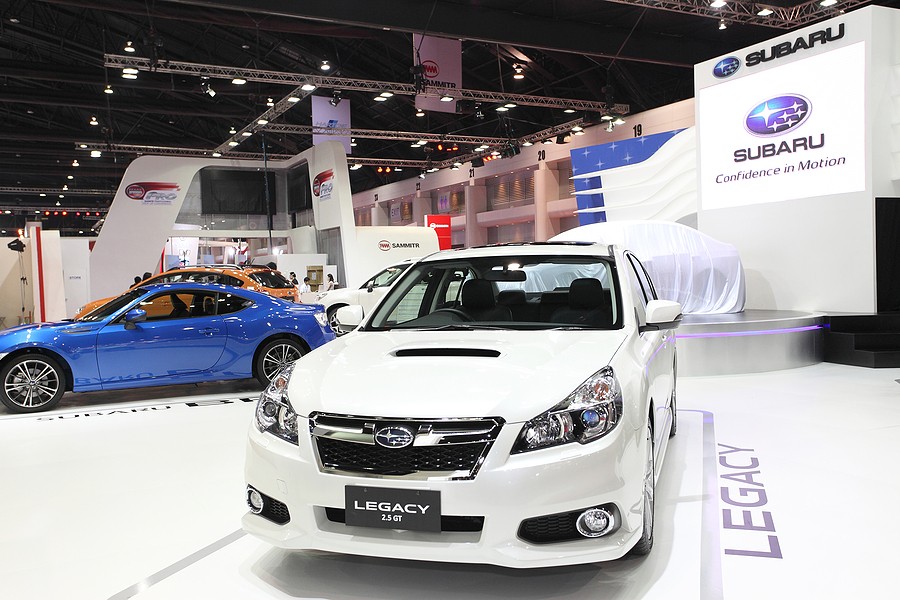 Unlike many auto manufacturers, Subaru chooses to use the boxer engine design for all of its automobiles. This is in direct contrast to engines that you'll find in most vehicles which are transverse and so on. Unlike a typical engine which might have the cylinders and pistons straight up and down or in a V shape, a boxer engine is a flat engine with the pistons and cylinders opposing each other on the sides in a horizontal layout. The Subaru 2.5 engine is one of the most common of the several times the company produces.

How Powerful is the Subaru 2.5 Engine?

Offering a greater displacement than Subarus 2.0 litre engine, the 2.5 L Subaru engine can provide your vehicle with 182 horsepower.

How Reliable is the Subaru 2.5 Engine?

There are different model numbers for Subaru engines that you should be aware of and when it comes to the Subaru 2.5 engine the EJ25 2.5 litre boxer is one that has become somewhat infamous over the years. Early versions of this engine were plagued with some serious problems due to unreliable gasket material. This happened throughout the 1990s, and although Subaru attempted to fix the problem in 1999 by changing the material the gaskets were made of to a multi-layered metal shim gasket, it didn't fully address the problem for many drivers. In fact, from 2001 all the way through 2009 there were still engines that had this problem of leaking head gaskets.

Because of the way a boxer engine is designed, the pistons and cylinders are on a horizontal plane rather than vertical or on an angle. The result of this is that at rest, things like engine oil or coolant are going to be actually resting on the gaskets when your car is parked. The fluids in your engine will pool and if the gasket material is not able to stand up to this, they will degrade over time as engine oil or other fluids are able to wear through them.

In a typical engine, when you turn the vehicle off all the fluid drains down thanks to gravity. This stops any kind of potential damage as a result. Gaskets can be subject to a lot of wear and tear, and anything acidic is going to eat through them over time. That was the problem with the earlier Subaru models and why so many of the gaskets started to wear down on drivers between about 90,000 miles and 150000 miles.

After this amount of time, with gaskets wearing down coolant and oil would start to leak from the engine and cause serious problems. Unfortunately, getting your gaskets replaced is not a simple task for any means that it's also fairly expensive. For parts and labour the cost of getting the gaskets replaced in one of these Subaru models would be somewhere around $1,500.

If you're in the market for buying a used Subaru, then you need to be aware that models from the mid 1990s and even up through 2009 could be subject to these head gasket problems. Especially now that many of these vehicles probably have over 200,000 miles on them. If they haven't had problems yet, they are more prone to having them soon.

Starting with the year 2009, the Subaru el25 engines should have had fewer problems with their head gaskets. This was the year of the multi-layer steel cylinder head gasket replacement.

By the year 2012 Subaru had redesigned its 2.5 litre engine for the Forester and the Outback and had effectively eliminated the problem altogether. That means for the last eight years this has been an insignificant issue, or at least one that has been so rare as to not be a standout from the crowd with any other potential issues that the engine might have.

That said, it's never a bad idea to do your due diligence and check things out. If you are in the market for picking up one of the models that features a 2.5 engine, then check the engine for leaks before you commit to anything. One of the best things you can do is check the oil by pulling out the dipstick and taking a look at the quality. If you notice that the oil is looking milky white, then there is a leak somewhere that is causing coolant to mix with the motor oil. This was traditionally one of the main symptoms of the gaskets failing because coolant and oil can then mix together.

How Can You Extend the Life of a Subaru 2.5 L Engine?

Although newer models of the Subaru 2.5 litre engine have been improved, if you happen to have an older model or are going to get an older model there are some preventive maintenance tricks that you need to keep up with if you want to ensure that the engine is going to work as long as it was designed to and not suffer issues with the gaskets wearing out prematurely.

Oil Changes: The best thing you can do for your engine is follow the routine maintenance schedule that has been set up for you in your owner's manual. That means regular oil changes for your vehicle without letting them go for too long. Too often drivers will let this slide for 1000 miles, 2,000 miles, or even longer after the needs to be done. The longer you let your motor oil sit without giving a change, the more likely it is to grow contaminated and that contamination is going to directly contribute to the wearing down of the head gaskets in your engine. As it picks up debris and other grime that makes it less functional, it will become more acidic as well and that's going to take its toll on the gaskets. Not to mention that it simply can't deal with regular job as well as it should and that's going to cause your engine to wear down sooner as well because it's going to overheat and suffer a lack lubrication.

Coolant Changes:  Just like getting your oil change regularly you need to keep on top of getting your coolant flushed as well. This should be done every couple of years, but your owner's manual again will tell you the exact schedule that should be maintained. Coolant can become contaminated over time and, just like motor oil, it will not only become less efficient, but it could start to wear down gaskets and seals as a result.

Clean your Battery:  This is one that many drivers don't think of but it's something you should keep an eye on. Take a look at your battery terminals and make sure that they haven't developed any kind of build up. If you're noticing a white crust on your batteries, that acidity can actually affect your cooling system by way of electrolysis. Keep your terminals clean and everything will be running a little more smoothly.

Now that you know the timeline of problems with Subaru and its 2.5 litre engines it's worth revisiting the issue as a whole. Although there's no denying that older 2.5 Subaru engines were riddled with problems and many people consider them some of the worst engines ever made, that is no longer true of their current engines.

Current Subaru models, that were made in the last 5 years or so, have definitely proven themselves to be more reliable. The Subaru Legacy, for instance, has almost no complaints lodged with the National Highway Traffic Safety Administration relating to engine problems over the last several years. The Subaru Forester likewise has had minimal issues with its engine over the last few model years as well.

It's also worth noting that the 2.5 litre turbocharged engine that was available in the Subaru WRX STI models had some serious issues as well. In fact, a class action lawsuit was filed alleging that the positive crankcase ventilation system and the pistons were subject to serious overheating in the vehicles.  The lawsuit claimed that there was a connecting rod and main bearing in the engine that failed sooner than they should have. Getting it repaired could have cost you upwards of $6,000.

If you have a Subaru Impreza WRX or an STI with a 2.5 L turbocharged engine from the year 2012 through 2017 then you could have been eligible for part of the settlement that Subaru reached in the lawsuit.

Subaru agreed to settle the engine defect lawsuit without admitting any wrongdoing. Under the terms of the settlement anyone who had a 2012 through 2017 Impreza WRX or STI was entitled to an extended powertrain limited warranty that had an additional eight years or 100,000 miles. Also, Subaru paid out-of-pocket expenses for anyone who had to make repairs related to the defects that were part of the lawsuit. If you went to a Subaru dealer you would get 100% of your money back for any out-of-pocket expenses to repair the problem. If you went to an independent shop to get it repaired, then Subaru was willing to refund anywhere from $3,500 up to $6,500 depending on the nature of the repairs that needed to be conducted. Of course, you had to be a member of the class action lawsuit to be eligible for any of this.

How Many Miles Will a 2.5 Subaru Engine Last?

This is a hard question to answer simply because of how many variables are in place. There's no definite answer from one car to another, or one driver to another. It depends on how you drive your car, how  you maintain your car, the conditions in which you're driving your car and so many more things. All of that said, if you're looking for a ballpark figure on how long a 2.5 Subaru engine is going to last, it's not out of the realm of possibility to expect at least three hundred thousand miles.

If you are very strict about how you maintain your engine and are ensuring that you are getting your oil change exactly on time, your coolant and so on then you should be able to expect that you can get three hundred thousand miles and even more out of your Subaru before anything serious needs to be done to either maintain or replace the engine.

Subaru has had a past with some serious problems in terms of how their 2.5 L engine works. Unfortunately, this happens to many automakers every so often in their histories. A manufacturing problem or defect will spiral out of control and make numerous models unreliable and essentially undrivable. If you're in the market for getting a new Subaru, just make sure you're avoiding those model years that have a history of problems with the 2.5 litre boxer engine in them.

Fortunately, Subaru was able to learn from their mistakes and improve on the design for later models so that you don't have to worry about this problem nearly as much. Still, it never hurts to be cautious when looking to spend your hard-earned money on a new vehicle. If you're in the market for a Subaru or any car for that matter, make sure you are checking it out thoroughly before you commit to buy and make sure you know the history of the vehicle including its maintenance schedule if you're buying one used.