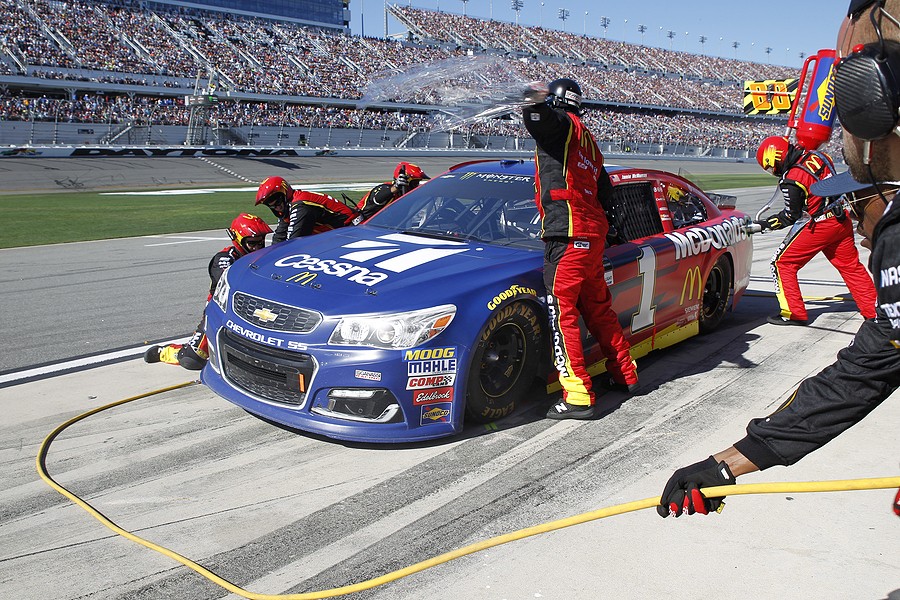 The National Association for Stock Car Auto Racing (NASCAR) is an American auto racing sanctioning and operating body for the sport of stock car racing. It was founded by Bill France Sr in 1948, with son Jim France as CEO since 2018. The privately owned company is headquartered at Daytona Beach Florida.

Stock car racing is a competition between cars that use standard auto bodies instead of cars with specially designed exteriors. The sport had its tremendous rise in popularity during the 1990s, and is now the second most popular televised spectator sport in the United States, next to major league football. Its Winston Cup series draws an overwhelming six million plus fans every year. NASCAR sanctions over 1,500 races at over 100 tracks across 48 US states and they have even branched out to Canada, Mexico, and Europe.

In the earlier years competing teams were provided just little support from the car makers themselves, but there was a turn around in the mid 1960s when teams already started creating partnerships with American car makers to provide factory support. For much of NASCAR’s history Chrysler, Ford and General Motors were the primary competing manufacturers.

For the most part Chrysler, Ford and General Motors were the primary, if not only, competitors for much of NASCAR's history. General Motors had been using four different brands in NASCAR up to 1991, namely: Buick, Oldsmobile, Pontiac and Chevrolet but within three years, Buick and Oldsmobile were no longer represented. Pontiac also survived only until 2004, leaving only Chevrolet as the lone General Motors representative. Chevrolet is also the most successful manufacturer winning 779 races and 39 manufacturer’s championships.

Chevy entered the NASCAR scene in 1955 and earned its first ever win in 1957 with Buck Baker sporting a 1957 Chevrolet 150 “Black Widow.” Chevy dealers became a convenient source for speed parts and with Vince Piggins, a successful engine and car expert hired away from Hudson, providing discrete engineering assistance (eventually transferring to Chevy at the mid 1950s) independent racing teams were able to keep the Chevy flag flying on the stock car scene through the 1960s and 1970s. Chevy continued to dominate the NASCAR scene in the following years.

In 2014 NASCAR decided that for the season they would be starting to mirror the points structure of the Owner's Championships, where the highest finishing driver for each manufacturer would be given the same number of points the representing team earned during the race, and that includes bonus points for wins and laps lead. In the 60 seasons the Championship has been awarded, only nine different manufacturers have won it with Chevrolet as the most successful manufacturer. With their Monster Energy Series, Chevrolet won 38 over 71 seasons. Chevy cars had also won 21 times over the 38 seasons of the Nationwide Series, and 11 over 25 seasons of the Gander outdoor series.

Chevy Cars has indeed dominated NASCAR over the years and it is without surprise that numerous of their cars have graced NASCAR’s Hall of Fame’s Glory Road. Here are a few of them with a snippet of history that helped them make their mark in NASCAR’s history.

1957 Chevrolet 150 “Black Widow” driven by Buck Baker's – Baker bagged the win for the 1957 Premier Series championship sporting his No. 87 Black Widow. He collected 10 wins, 30 top fives and 38 top-10 finishes over 40 races in the process. It was the first ever win for Chevy in the history of NASCAR and stamped their legitimacy in the hearts of passionate car buyers and fans.

1939 Chevrolet Coupe – driven from 1970-1971 by Richie Evans who got his first NASCAR Modified Division championship in 1973 and then won another one in 1978, which started an awesome stretch of seven more titles through 1984.

1973 Chevrolet Chevelle driven by Bobby Allison sponsored by Coca-Cola at the 1973 Daytona 500. He earned a pair of victories and seven-place in the points standings.

1976 Chevrolet Laguna S-3 driven by Cale Yarborough who won his first Cup Series championship in 1976. The unusual sloping urethane nose graced the Laguna model making it the weapon of choice for the Chevy teams. Yarborough drove the same Chevy model for Junior Johnson in 1976 and 1977 and would end up winning 28 races overall and the first two of three consecutive Winston Cup championships.

1976 Chevrolet Monte Carlo driven by Darrell Waltrip. The 3-time NASCAR Cup Series champion who is now a FOX NASCAR analyst got 84 wins in 809 races. In 1976 Gatorade sponsored Waltrip’s No. 88 DiGard Chevrolet, which he drove to a victory in the Virginia 500 at Martinsville Speedway.

1986 Chevrolet Monte Carlo Aerocoupe driven by Darrell Waltrip who garnered 3 championships and 43 victories driving for Junior Johnson in the Cup Series from 1981 to 1986. The current FOX NASCAR analyst drove this Chevy car to what would be his final race for Johnson in November 1986 at Riverside International Raceway in California. Waltrip's NASCAR title win in 1985 for Johnson followed by Dale Earnhardt’s win in '86 and '87 for Richard Childress made it “four for four” in Chevrolet’s history. In the 70s, as mentioned above, Chevy had fashioned the scoop-nosed Laguna to make the car more competitive in NASCAR and then in the early 1980s with the same goal they redesigned both ends of the Monte Carlo. But the designers went beyond and outdid themselves with the 1986 Monte Carlo Aerocoupe. Two hundred were built for NASCAR allowing the adoption of the radical silhouette on Winston Cup Chevys.

1994 Chevrolet Lumina driven by Jeff Gordon during his second full-time NASCAR Cup Series season. It led to his first career win in the Coca-Cola 600 at Charlotte Motor Speedway and earned him his second win in the inaugural Brickyard 400 at Indianapolis Motor Speedway later the same year.

1997 Chevrolet Monte Carlo driven by Jeff Gordon earning him his first Daytona 500 win 1997. Later on he would end up winning 10 races en route to his 2nd Cup title.

1998 Chevrolet Monte Carlo driven by Dale Earnhardt. With this vehicle Earnhard would win the 1998 Daytona 500 Championship after 20 years of trying.

2008 Chevrolet Impala SS driven by Jimmie Johnson. It was year 2008 when Johnson drove a No. 48 Chevy Impala when he became the second driver in NASCAR history to win three consecutive championships, with the first being Cale Yarborough. He bagged 7 wins, 15 top fives and also 22 top-10 finishes that same season.

2008 Chevrolet Impala SS driven by Dale Earnhardt Jr. during his first season with Hendrick Motorsports. Earnhardt began the 2008 season sporting his new ride and winning what was then known as the Budweiser Shootout at Daytona. He then snapped a 76-race winless streak with a win at the Michigan International Speedway later that year.

2011 Chevrolet Impala driven by Tony Stewart. Sporting the No. 14 Stewart’s Chevrolet Impala graced the Glory Road exactly how it was left after he won his 3rd and final Cup Series title in 2011. He beat Carl Edwards at Homestead-Miami Speedway Championship in November of 2011 finishing 1-2 in the season finale. A tiebreaker on wins made way for Stewart to earn his third and final title.

2013 Chevrolet SS driven by Jimmie Johnson who began the 2013 season by bagging his second Daytona 500 in this Generation 6 vehicle. He later earned his 6th NASCAR Cup Series championship.

It’s unfortunate that recently Chevrolet hasn’t been winning Cup races like they used to. As a matter of fact they have not won a cup race in 2019 after already underperforming for the most part of 2018. But because of an overwhelming lead Chevrolet could still easily take off almost the next three full seasons from the NASCAR Monster Energy Cup Series and retain a lead over Ford.

NASCAR remains to be a vital marketing means for Chevrolet for the reason that there are only two other manufacturers in the Cup series, the first one being a longtime rival and the other, Toyota, a manufacturer NASCAR fans still don’t count on after more than a decade because they continue to be seen as foreign.

It became worse for Chevy as Ford rolled out its new Mustang car for Cup competition last year to early success, which is a muscle-car adversary to Camaro. The Chevy Camaro won its first Cup race in 2019 but did not win again until the 22nd race which was already in August. It hasn’t been a particularly spectacular debut for the Camaro

Only a single Chevy driver won a race in 2018, Austin Dillon, who won the Daytona 500. Five Chevy drivers were able to qualify for the 16-driver Chase, but 3 were already eliminated after the first round, and unfortunately no Chevy drivers made it to the four-car title race. Chevrolets’ surprising lack of power has been a surprising story of the later seasons as they endured a losing streak from 2017-2019.

And also out of all the drivers who graced the NASCAR scene only thirty-three different drivers were able to win the Championship, with Richard Petty, Dale Earnhardt, and Jimmie Johnson holding the most titles records, with seven each. Jimmie Johnson has the record for most consecutive Drivers' Championship titles having won five from 2006 to 2010. Richard Petty has driven a Chevy with Earnhardt and Johnson having exclusively driven a Chevy.