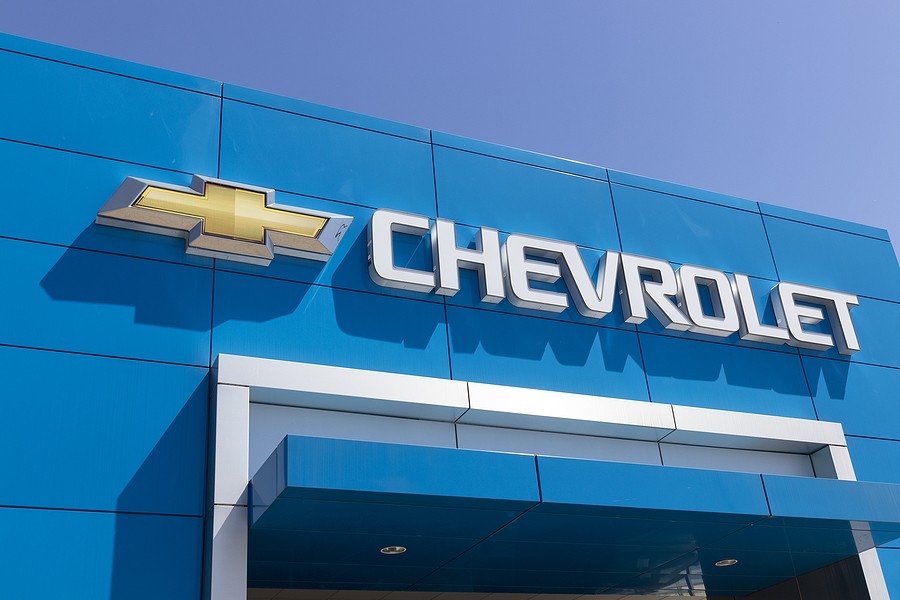 Chevrolet or Chevy as many call it, is an automotive company that was founded on November 3, 1911 Louis Chevrolet, William C. Durant, and other investment partners. Louis Chevrolet was an automotive engineer and a Swiss car racer while William C. Durant started as a salesman and eventually founded multiple companies. He founded the Flint Road Cart Company in 1886 and the Durant-Dort Carriage Company in 1890. He also founded General Motors and assumed control over the then troubled Buick Motor Company. Durant is known today as a leading pioneer of the automobile industry in the United States.

Like most successful brands, Chevy started in humble beginnings before achieving its global success. Now, it is one of the biggest names in the industry that manufactures reliable and superior vehicles. Chevy is best known for its car such as the Camaro, Equinox, Silverado, Corvette, and many others. Kids probably know and love the yellow Camaro more thanks to the Transformers movie hero, Bumblebee. There is another thing that the Chevrolet is famous for – its Bowtie Emblem. The bowtie emblem has become more than just a brand logo and a marketing tool, it clearly has become a symbol of recognition. The symbol that is recognized and associated  with one of the biggest car brands of today.

The Chevrolet bowtie logo was introduced by the Chevy co-founder William C. Durant in 1913 and first appeared on their H Series and L Series vehicles in 1914. There are lots of stories and theories as to how Durant came up with the logo and what inspired him to create the emblem. There are multiple stories or theories that were told about the origin of the famous bowtie emblem.

The Paris theory is the most accepted version among all theories and is the most popular one. It was told by Durant himself. In celebration of Chevrolet's 50th anniversary in 1961, they released an official company publication, The Chevrolet Story.  The author wrote, “It originated in Durant's imagination when, as a world traveler in 1908, he saw the pattern marching off into infinity as a design on wallpaper in a French hotel. He tore off a piece of the wallpaper and kept it to show friends, with the thought that it would make a good nameplate for a car.” However, Durant’s family disagrees with this story.

This version is from Durant’s daughter, Margery, which she narrated in her own memoirs. She published a book entitled The Father in 1929. She wrote, “I think it was between the soup and the fried chicken one night that he sketched out the design that is used on the Chevrolet car to this day,”. Durant loved to sketch and doodle. His daughter said that Durant occasionally doodled designs of nameplates on sheets of paper at their dining table.

In a 1986 issue of Chevrolet Pro Management Magazine that was written based on an old interview with Durant's widow, Catherine, another theory came out. She looked back on the time when her and her husband were on a holiday trip in Hot Springs, Virginia in 1912. She said that Durant came across a design in an ad of a newspaper he was reading in their hotel room. According to her, Durant then exclaimed, “I think this would be a very good emblem for the Chevrolet.” During that time, Catherine didn’t clarify what it was and how it was used. However, that little piece of information drove a historian and an editor of The Chevrolet Review named Ken Kaufmann to do a little digging about the story’s validity. He came across a Nov. 12, 1911 edition of The Constitution newspaper that featured an ad for Coalettes by the Southern Compressed Coal Company. The Coalettes logo surely did have a resemblance to the Chevy emblem with its slanted bowtie form.

This theory explained that the design was inspired by the cross of the Swiss flag to pay homage to the company’s co-founder Louis Chevrolet’s Swiss-heritage. He was born in La Chaux-de-Fonds, Switzerland, Canton of Neuchâtel, to French parents, on December 25, 1878.

The First Vehicle to Use the Bowtie Emblem

With the launch of the bowtie emblem in 1913, the first ever vehicle to receive the emblem was the Chevrolet H-2 Royal Mail Roadster. The roadster had seating for two. It was equipped with an overhead valve inline four cylinder engine, speedometer, horn, spare tire, headlights and came with a 104 in (2,642 mm) wheelbase. It was assembled at the Flint Assembly, Flint, Michigan.

Chevrolet Logo Description and its Evolution

The Chevy logo has only changed a little throughout its history. The colors and design was changed but it always came with the bowtie. It has been used even way before World War II and somehow, it got stuck as a nickname and people even use it as an adjective to describe the car.

Some people call it the cross as it looks like a slanted version of it with its two thick stripes that are overlapping each other, but in most cases, it has always been referred to as a bowtie.. Through the years or century, the logo had its fair share of redesigns and revisions.

The original 1913 logo was with a bowtie and the brand name Chevrolet written across it in the center along with two horizontal lines. It was in a white and light blue colors with gold borders.   Who would have thought that it  was going to be the beginning of an iconic symbol.

The next revision was in 1936 with a slightly different font and background from the original one. The light colors were removed and were replaced with a monochrome layout. The letters were bigger and had a more serious vibe.

The 1947 logo came with a small bowtie inside a winglike symbol and the name Chevrolet was removed. This logo was used on many Chevy models such as the Fleetline, Fleetmaster, and Stylemaster.

Another revision came in 1955 with the bowtie inside an elongated crest shape. This logo was given a classy backdrop. It can be seen on the upscale Bel Air, its mid-range counterparts 210 and 150, and the Nomad models. These models are very popular with collectors until now.

In 1969, they started the Chevy’s modern look logo. Its purple logo was quite interesting. It appeared on the 1969 Chevrolet Camaro models.

In 1974, they revised it again and this time, they used the basic silver cross symbol. The silver logo was seen first on the 1974 Chevrolet Impala.

The 1982 logo was a gold bowtie that had some similarities with today’s logo. This logo was introduced on the 1982 Blazer.

In the year 2004, the gold logo was given more dimension. It was first seen on the 2004 Chevy Malibu model.

And in the year 2013, the logo was given an extra texture along with the celebration of the iconic bowtie’s 100th anniversary. In an official statement, Chevrolet stated that several variations in coloring and detail of the Chevrolet bowtie have come and gone over the decades since its introduction in late 1913, but the essential shape has never changed. It was in the year 2004 that Chevy started to phase in the gold bowtie that serves as the present brand identity for all its vehicles marketed worldwide. The move reinforced the strength of what was already one of the most-recognized automotive emblems in the world.

It is truly a wonder how the Chevy “bowtie” became a symbolic auto emblem design and how it came to hold such an authority.

The Colors of the Chevy Emblems

Today, there are three different versions of the Chevy emblems. One version is the bowtie that has colors of gold and yellow and is decorated with a silver border. It is commonly used on Chevy’s standard and commonly produced vehicles. Its rich colors project enthusiasm and strength. Then there’s the blackout version of the Chevy emblem which are used and equipped on their black or midnight editions. The third one is the newest emblem design. It also looks like the black emblem, but this one is different as it is hollow. It is called a Flowtie and was first introduced on the Z/28 Camaro. This hollow emblem is rather useful as it allows three additional cubic meters of air into the engine per minute that provides better aerodynamic and cooling properties.

Chevrolet has been in business for over a century now. It is a global automotive brand that is famous for manufacturing vehicles that have great fuel economy, safe, and reliable.  The Chevy vehicles are built to impress with its stunning designs, great performance, high-quality build, and value. This global automotive brand has sales of about 4.25 million vehicles in more than 120 countries yearly. For the year 2019, Chevy sold almost 2 million vehicles in the United States and Canada.

The Chevrolet portfolio consists of well-known performance cars like the Corvette and Camaro, heavy-duty and durable pickup trucks and SUVs such as Suburban, Blazer, and Silverado, and the outstanding passenger cars and crossovers such as Spark, Sonic, Malibu, Equinox, Impala, Cruze and Traverse. Chevrolet also offers a variety of hybrid and electric cars such as Cruze Eco and Volt. Most of the vehicles on the Chevy portfolio are equipped with loads of safety features such as the Hands-Free Calling, Automatic Crash Response, Stolen Vehicle Slowdown, Front Pedestrian Braking, Forward Automatic Braking, Adaptive Cruise-Control Camera, Rear Vision Camera, Lane Change Alert with Side Blind Zone Alert, Lane Keep Assist with Lane Departure Warning, Forward Collision Alert, and the Rear Cross Traffic Alert.

Chevrolet surely did come a long way since it was started almost 109 years ago. Chevy created vehicles that are not only reliable, but also award-winning. Here are some of the Chevy vehicles that wore their emblems with pride and the awards they have won over the past 5 years.

Chevrolet’s Plan For The Future

Chevrolet is ready for the future. They are all set to continue the legacy their founders worked hard for. Their plan for the future includes revamping their whole operation to prepare the demands of the growing Electric Vehicles trend. Because of this, Chevy will be producing a new All-Electric Full-Size Truck that is expected to be released in 2022. They are also planning to upgrade their EV vehicles’ batteries to give more mileage in both city and highway driving and will be investing more in Electric Vehicles and Self-Driving Technologies. It is pretty evident that there will be more promising things that Chevrolet is planning to do and accomplish. And as for the iconic emblem, we don’t know yet if Chevy has plans for it or if it will undergo another revision. But one thing is for sure, the Chevy’s Bowtie Emblem is one of the most prominent car logos of all time.