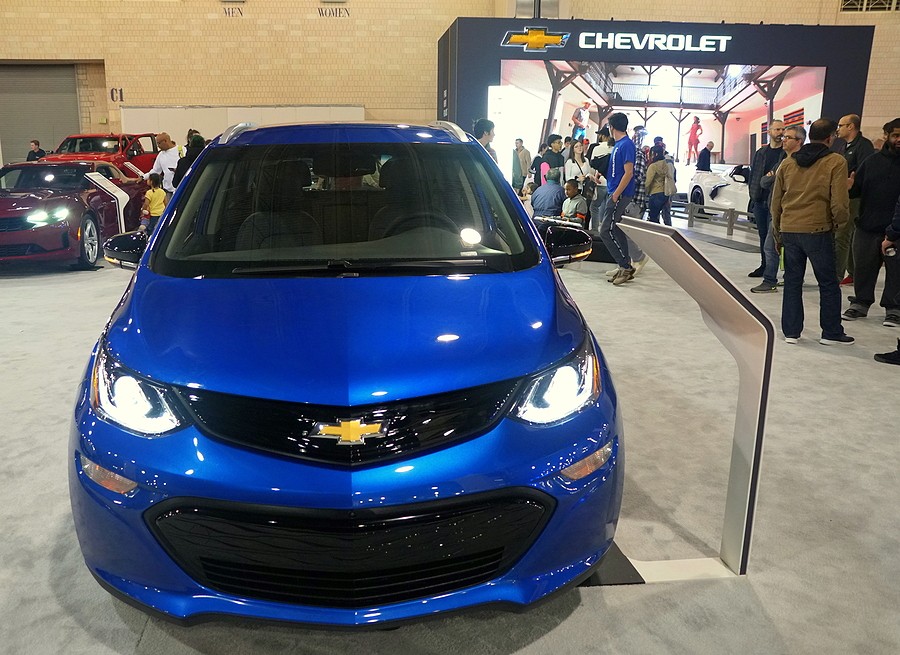 In January of 1996, General Motors announced at an auto show that it would build an electric car called EV1. The EV1 was not completely a new concept since electric vehicles were already present in early days of the car industry.

In late 2003, GM announced it was putting an end on the EV1 program, and would no longer renew any leases. The company cited the high production and maintenance costs as reasons for killing the EV1. However, as The LA Times did say in 2009 that the EV1 started in 1990s as a response to California’s Air Resources Board’s mandate of a zero-emission vehicle, and when GM and other auto companies were able to get California to soften its mandate in 2002, the GM CEO, readily canceled the program.

The Chevrolet S-10 Electric was introduced in 1997, updated the next year, and then discontinued. It was an OEM BEV variant of Chevy’s S-10 pickup truck and was solely powered by electricity. Chevrolet had tried something that was never done before on a pickup. It featured an all-electric drive, S-10 EV could go on a 60-mile trip on a single electric charge and could reach speeds up to 70 miles per hour which is only 10 mph less than the GM EV1.

For the design, GM started with a regular-cab, short-box S-10 pickup, with an entry-level trim package and a half-tonneau cover. Instead of the 4-cylinder or V6 combustion engine, the Electric S-10 EV has an 85-kilowatt (114 horsepower) three-phase, liquid-cooled AC induction motor which is based on the EV1 electric coupe of GM. GM reduced the S-10 EV’s motor to 85-kW from the EV1 which had a 100 kW motor as the added weight and drag of the truck could overstress the batteries.

Aside from the reduced motor size, most of the EV1 power electronics were carried over from the S-10 EV which meant the electric S-10 was going to use a front-wheel-drive configuration which deviated from the rear-wheel-drive setup of the standard S-10, and in the rival, Ford Ranger EV.

The S-10 EV was sold mainly to utility fleet consumers. It was up for sale and not only for lease through restrictive programs. Chevrolet was able to sell off 60 of the S-10 EV trucks to fleet customers which means many of these trucks can still be seen on the road today. The fleet life of several of these pickups ended in 2007 and 2008. Chevrolet ended its S-10 EV for several of the same reasons that GM killed its EV1, thus several of the unsold models were similarly crushed and scrapped. It would be the last commercial electric vehicle from Chevy for almost 20 years. However, that does not mean that the company was slacking off on this electric technology.

Chevrolet launched the Spark EV as a first move toward an all-electric mass-produced vehicle since the S-10 of the mid-90s. It is an all-electric version of the efficient compact Spark for the 2015 model year. This athletic electric car has an impressive 82-mile range on a single charge. When it was launched, it was commended for its seemingly acceleration. It had a 327 lb-ft of torque. The Spark can be fully charged in just 7 hours and comes with an available DC Fast Charging option, allowing you to charge the battery to 80 percent in just 20 minutes at a Fast Charging station.

The Chevy Spark which is initially marketed as the Daewoo Matiz comes in a subcompact hatchback city car manufactured by GM’s subsidiary GM Korea. The first gen of Daewoo Matiz was unveiled in 1998 by GM’s South Korean division which is known before as Daewoo Motors, as replacement of Daewoo Tico. In 2002 GM took control over Daewoo Motors and started increasingly to market it under the Chevy badge.

The second gen model was unveiled in 2005, with the third gen introduced in 2010. A limited-production all-electric version, the Chevy Spark Ev, was made available in the U.S. in chosen markets in Oregon and California in June 2013. The Spark EV was the first all-electric passenger vehicle released by GM since the EV1 was killed in 1999.

After the electric car got killed in the mid-90s, consumers were not buying the all-electric concept. But as gas prices continued to increase, more and more vehicle owners were eyeing hybrid technology to combine the reliability of a gas engine in terms of gas engine with the emission free efficiency of an electric.

For a time, several companies built models that used hybrid drivetrains to balance performance and efficiency. In 2013, Chevy played with hybrid SUVs such as the Tahoe and Silverado, but this move did not result in much sales. Chevrolet had to take a new strategy to finally make it click.

The Chevy Mi-Ray was a concept vehicle designed, branded and made by Chevrolet. It was first introduced at the 2011 Seoul Motor Show that would be a precedent of the way Chevy built the successful hybrid models. The Mi-Ray shows a “mid-electric” concept and has dual front-mounted 15-kW electric motors with a 1.6-kWh lithium-ion battery charged via regenerative braking. It powered its front wheel solely with electric power so that meant that you could drive the Mi-Ray around the city using just front-wheel drive without using a drop of gasoline. This was indeed a revolution in driver-selectable efficiency which made this particular model essentially an on demand electric car or hybrid car.

The Mi-Ray’s exterior is made of carbon fiber and the side has an angled groove that lighted beneath it. It also has a dual port grill and LED headlights. There are retractable flaps at the back which give the car more airflow. The concept comes with 20-inch aluminum-carbon fiber composite front wheels and 21-inch in the back. You can enter the car through scissor doors.

Chevrolet would take the same concept from the Mi-Ray and apply it to succeeding hybrid models and this time it gained notable success. The 2016 Chevrolet Malibu has a hybrid drivetrain that has a 55-mile per hour drive range and after that it will use the gas engine. This has the same system of allowing the electric motor to run solely as long as it is able to before it activates the gas engine for maximum efficiency. You can also not use gas at all if you are only driving short distances.

If the Malibu hybrid is built to maximize the gas engine’s efficiency, its sibling, the 2016 Chevy Volt, is designed to maximize electric range. It can travel up to 53 miles using electric power alone and is built to minimize usage of gas as much as possible and depend mainly on electric.

The Chevrolet Volt was introduced earlier than 2016. The 2011 Volt was available in the US market in mid-December 2010 and was made available to the European and other international markets in 2011. Chevrolet was able to sell 177,000 units of the Volt/Ampera-family by the end of October 2018. The U.S. got the most sales, having 157,054 Volts sold by the end of 2019, next is Canada with 16,653 Volts sold by 2018, and just over 10,000 Opel/Vauxhall Ampera vehicles sold in Europe as of June 2016. The Volt/Ampera family of cars was the all-time best-selling plug-in hybrid vehicle worldwide until December 2018. And as of the end of 2018, the Chevy Volt is listed as the all-time top-selling plug-in hybrid in the U.S. market. Chevy stopped the production of Volt in February 2019.

The 2013/2015 model year Volt has a 61 kilometer-all-electric range with a combined electric mode/gasoline-only rating of 62 mpg under the United States Environmental Protection Agency cycle. The second-gen Volt’s upgraded battery system and drivetrain increased the all-electric range to 85 kilometers, has a combined city and highway fuel economy in all-electric mode to 106 MPG-e which increased from 98 MPG-e. Deliveries to retail U.S. and Canadian retail consumers started in October 2015 as a 2016 model year. The Volt was able to get a number of awards such as the 2009 Green Car Vision Award, 2011 World Green Car, 2011 World Green Car, 2011 North American Car of the Year, 2012 European Car of the Year, and 2016 Green Car of the Year.

And though the hybrids themselves are impressive, Chevrolet did not hesitate ditching gas power altogether.

The Chevy Bolt was first unveiled in 2015. It’s known for its stylish exterior and had an impressive performance that can drive as far as 200 miles on a single charge and the battery can be fully charged in just nine hours. This five-door subcompact hatchback EV boasted unparalleled efficiency while offering luxury at the same time. It is marketed by Chevy, developed and built in partnership with LG Corporation. It has a rebadged European version called Opel Ampera-e which was sold in mainland Europe.

For the 2020 model year, the Chevy Bolt has an EPA all-electric range of 417 kilometers which increased from 383 kilometers for the 2017-2019 versions. It has an EPA fuel economy rating of 119 mpg for combined city and highway driving.

Production for the Chevy Bolt 2017 began in November 2016 and for the European version, it started production in February 2017. It became available in the U.S. market in California in December 2016, with nationwide and Canadian sales started in 2017.

The expected demand did not accurately match prediction which led to GM slow production in July 2017. But the Bolt demand increased quickly in the last months of 2017 and by October of that year, it surpassed any other model of electric vehicle which includes those from Tesla. It ended up being the second best selling plug-in car in the U.S. in 2017 after the Tesla Model S. It even beat Tesla in California having 13,487 units sold compared to Tesla’s 26,500 units. At its introduction, the Chevy Bolt earned the following recognitions: the 2017 Motor Trend 2017 Car of the Year,  Automobile Magazine 2017 All Star and the Motor Trend 2017 North American Car of the Year.

However, the 2018 US sales for the Bolt dropped by 22 percent from the previous year with total sales of 18,019 units. On the other hand, the sales of the Tesla Model 3 in the US, increased significantly. The combined sales of the Bolt and Volt prompted the full $7,500 tax credit phase out in the last quarter of 2018, which then reduced the tax credit to $3,750 in April 2019 and $1,875 in the last quarter of 2019 before disappearing completely by April 2020.

The Bolt was no doubt impressive when it was the only low cost, long-range all electric vehicle in town. But now it has many better rivals like the Soul EV, Niro and of course Tesla’s Model Y.

General Motors gave a glimpse recently of two versions of the Chevy Bolt, the all-electric vehicle that was first introduced in 2017. This all-electric hatchback had a following but still got left behind by the Tesla Model 3 in recent years despite having an improved range.

Now, GM is readying to introduce to market next summer a refreshed version of the first Bolt EV plus an extended crossover variant of the Bolt–the new Bolt EUV. GM reported that these two vehicles will be produced in summer 2021.

What we know so far is that the new Bolt EUV will come equipped with Super Cruise–GM’s hands-free active driver assistance system. This system utilizes a combination of high-precision GPS, lidar map data, cameras, radar sensors and driver attention that can monitor the person behind the wheel to make sure they are paying attention.