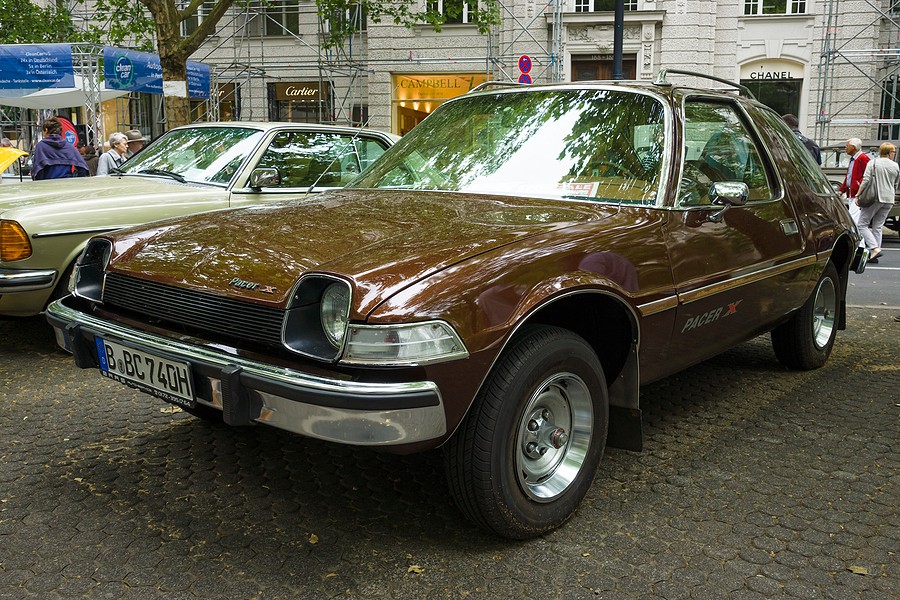 The AMC Pacer is a two-door compact car that has been produced by the American Motors corporation from the 1975 to 1980 model years. With the design work beginning in 1971, the rounded shape and the large glass area were unique and distinctive to the AMC Pacer. The width is equal to full-sized domestic cars, while the length was considered a “small car.”

American Motors Corporation – Who Made the AMC Pacer

The similar competitors to the AMC were the automakers who comprised the BIg Three – Ford, General Motors, and Chrysler. The main production line form AMC focused on small cars, including the Hornet, Gremlin, AMC Pacer, intermediate cars like the Ambassador and the Rebel, and larger muscle cars including the Marlin and AMX.

The creation of American Motors began in early 1954, when Nash Kelvinator began the acquisition of the Hudson Car Company, with the merger hopefully creating a rival to the Big Three, with the 1953-1954 Ford and GM Price war having an extremely negative effect on independent and smaller automakers across the world.

During the 1950s, the first product development and consolidation bega. The American Motors combined the Nash and Hudson product lines in 1955, with the production churning out the fast-selling Rambler model in 1955 and 1956.

The Pacer was created many decades later, with the AMC Pacer being an innovative all-new model that was first introduced in early 1975 and marketed as the first wide small car, being a subcompact that could also provide the comfort of a full-size car.

The stylist who created the AMC Pacer, Dick Teague, first began working on this innovative creation back in 1971, thinking there might be an increased demand from the public for smaller cars that could provide ample comfort. This new car was created to offer the interior room of a bigger car, but provided in a smaller and more aerodynamic package.

The shape was rounded with a huge glass area for plenty of visibility, providing a unique, functional, and unusual look for its time period. Both Car and Driver magazine and Road & Track magazine described this car as bold, functional, fresh, reasonable, and compact.

Development was under the lead of Gerald C Meyer, the former chairman and CEO of the American Motors Corporation. His goal was to create a car that was completely unique, providing hate everything they did was individualistic, different for the competition, and possibly even controversial in the world. He wanted the AMC Pacer to be distinctive from the other cars on the market.

A number of futuristic qualities were considered by the American Motors Corporation, but the automaker did not have the right amount of resources or monetary value to build the components from scratch. However, they used outside suppliers to create the parts and create the AMC Pacer.

With a small car shape but positioned uniquely, the AMC Pacer was as wide as a full size American car, while mating the small interior and length. American Motors created the AMC Pacer to have the wheels pushed to the cornea and the A-pillars moved forward. The A-pillars are the vertical supports of the car’s window area that support the vehicle.

In addition, the windshield design was placed over the engine. With all of these distinctive and unique features, the AMC Pacer was considered the “first wide small car.” The width was also played by the marketing strategy and the advertising done by the American Motors Corporation. Although American drivers had become used to larger vehicles, American Motors played up the fact that the AMC Pacer provided ample comfort for a small car.

Other unique features of the AMC Pacer was the passenger door was longer than the drive’s, making the passenger loading easier and making driving a bit safer for countries that use the curbside and drive on the right side of the road.

Along with the unique passenger door, another approach was used that was unique to the AMC Pacer, including the front suspension and engine mounting. The AMC Pacer was the first car in the United States to use the engine and the suspension system noises completely separate from the passenger compartment, creating a relaxing and comfortable ride. The entire suspension was accompanied by heavy rubber bushings.

Furthermore, the AMC Pacer featured energy absorbing bumper mounts and bases of the pillar behind the doors for extra support. The AMC Pacer was designed to meet the safety specifications of the time period.

Introduced first at the beginning of 1975, the AMC Pacer was designed to attract those who traditionally bought larger cars, targeting this market during a time in history when the gas prices were projected to rise dramatically. In the first year of AMC Pacer production, the car sold well, with selling nearly 145,530 units. However, there was little competition, as many other American companies had it been prepared for the impending oil crisis.

However, despite the initial success, the AMC Pacer sales decreased after the first two years, although the car continued to be produced and sold throughout the 1980 model year. Similar to the mid-year introduction, the AMC Pacer production ended in Wisconsin at the very end of 1979.

The total number of AMC Pacers ever built came out to 280,000 cars, and were hampered by the competition from the Big Three automakers and the shift to other imported cars and companies in the late 1970s decade. Since the AMC Pacer could not match foreign cars, like those from Germany or Japan, they stopped being produced.

In addition, another reason for the lack of success was the unconventional and unique styling of the AMC Pacer. Other concerns along with the distinctive styling is the lack of cargo space when the car is completely full. The cargo space can be increased by folding down the back of the rear seat, but still could not hold passenger gear for every single person.

In addition, the car did not have a high performance or power from the engine, especially since the AMC Pacer was heavy for a small car. The car was already quoted at nearly 3000 pounds, but the car actually increased to nearly 3,500 pounds when they added the air conditioning, automatic transmission, power steering, and other parts that were not initially counted.

The specific models and variants of the AMC Pacer depend on the year of production, with the AMC Pacer First starting out as an economy car, and eventually turning into a small luxury car in later model years.

X Package – Available as the AMC Pacer X from 1975-1978, the version was renamed the Sport in 1978 and then only lasted one year after that. Consisting of vinyl bucket seats, the sports steering wheel, and custom trim, the car contained exterior chrome features and styled road wheels.

D/L Package – a more upscale edition than the original AMC Pacer, the D/L was available for the entirety and every single generation of the AMC Pacer and became the base model in 1978. The package included woodgrain instrument panels, optional interior features, and exterior chrome accents.

Limited Package –  Available in just two years from 1979-1980, the Limited featured leather seats, sound proofing, and deep carpet, available with other amenities including an AM radio, power door locks, power windows, and a tilt steering wheel for the AMC Pacer.

Sundowner – Available through AMC dealers for the 1975 model year only, this type of AMC Pacer was nearly $3,600 and included coordinated trim on the door panels, remote control exterior mirrors, rear window washers and wipers, and a roof rack.

Levi’s Package – Introduced during the 1977 model year, this type of AMC Pacer capitalized on the Hornet, and featured a Levis’ logo sticker to each front fender, denim upholstery, and door panel trim, but did, unfortunately, it do well on the market and was only produced for one year.

AM Van – the 1977 AM Van was a specific type of AMC Pacer that was based on an existing platform, but had proposed features of four wheel drive, turbo decal on the double side opening rear doors, and was used primarily as a concept car during the auto show circuit tour.

Some types of AMC Pacers were converted to plug in electric vehicles, vehicles that could be recharged from an external source of electricity, like sockets, and stored in rechargeable battery packs that contribute to the wheels. The Electric Vehicle Associates created the Change of Pace model – an adaptation of the AMC Pacer that was priced originally at $12,360 and produced nearly 100 units.

First available in the sedan version, power originally was produced through the eighteen 6-volt lead acid batteries to the DC motor with the three speed automatic transmission. The Change of Pace sedan weighed nearly 4,000 pounds and reached nearly 60 miles per hour with a 53-mile range in the AMC Pacer.

Later on in the production of the AMC Pacer electric version, the wagon version had twenty VARTA batteries that were housed in two packs with a 26 kW motor. The electric Pacer of the AMC Pacer was one of the most expensive cars coming in at around $14,000.

According to the critics, there have been varying accounts of the reliability, performance, and user views of the AMC Pacer over the years. Back in 1975 in an issue of Car and Driver, the author noted that the AMC Pacer was the “first real urban transporter” and had “high priority on comfortable and effective travel.”

In the same year, Road and Track road tested the AMC Pacer, with the magazine not sign the outward appearance was “bold, clean and unique”, but the engine and transmission of the performance were lackluster and unsafe, causing “the AMC Pacer to screech, skid, and demand expert attention at the wheel.”

In Popular Mechanics, the author wrote that the ride was smoother than most short-wheelbase cars, the rack and pinion steering gave a more precise steering feel, the cornering was predictable and safe, the turning radius allowed for ease while parking in tight corners, and the steering wheel was big and easy to use. In addition, he noted the “very modern styling, ample power, and generous interior” of the AMC Pacer.

Consumer Reports described the Pacer as doing as well in terms of performance as competitors like the Dodge Dart, Plymouth Valiant, and Chevrolet Nova, with the AMC Pacer scoring better than “domestic subcompacts like the Ford Pinto, the Chevrolet Vega, and AMC’s own Gremlin.”

Later on, in 2005, Hemmings Classic Car magazine stated that the AMC Pacer was stylish, sleek, audacious, and looked like a futuristic car. In addition, Motor Trend magazine said the car was “the most creative and most people oriented auto bor in the US in 15 years.”