Symptoms of a Blown Head Gasket: Why You Shouldn’t Ignore It! 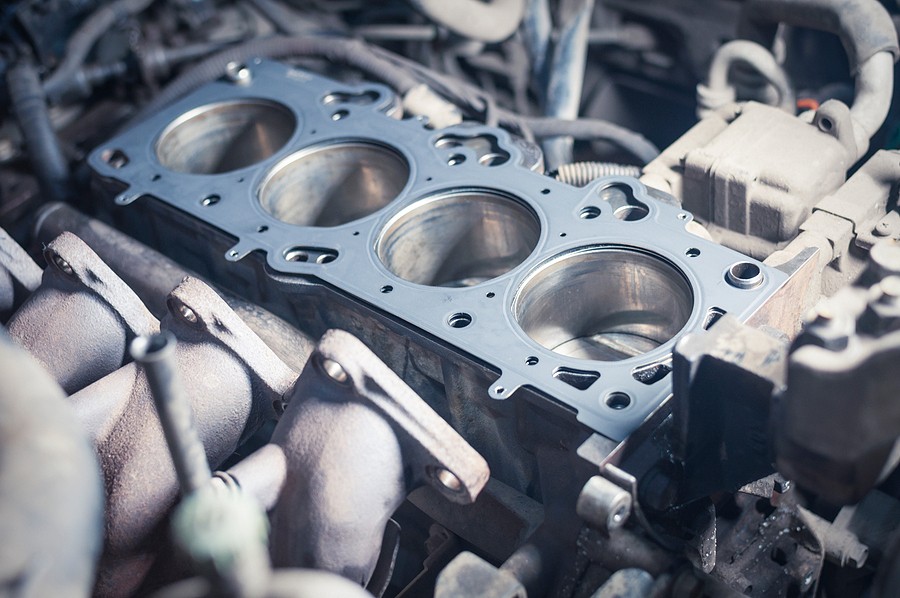 The car’s head gasket is known to be a critical seal. It acts as a seal between the engine block and the cylinder head which are two of the most crucial parts of the engine. The head gasket should be able to seal and prevent leakage between the two during the compression process. However, the head gasket is susceptible to wear and other damages since it is exposed to a number of car elements like oil, water, fuel, and exhaust gases. You will know if it is failing if you notice any symptoms of a blown head gasket such as bubbles in the radiator, engine power loss, milky build up under the oil cap, blue smoke, white exhaust smoke, or engine overheating.

If you notice that your car has or is experiencing any of the symptoms of a blown head gasket, do not ignore it. If you ignore it and leave it too long, it could cause severe damages to your car and you’ll end up paying more than just the head gasket repair or replacement cost. A blown head gasket can damage your engine and catalytic converter which are two of the most expensive car parts to repair. We’re pretty sure that you don’t want to deal with that. If you want to know more, read on! We’ll tell you everything you need to know!

Symptoms of a Blown Head Gasket:  How Can You Tell If You Have a Bad Head Gasket?

The role of the head gasket is to seal the internal combustion process and prevent any fluids from leaking and mixing. This can help your engine from overheating or catching fire since it keeps the oil and coolant from leaking into the cylinders. Plus, it is important that the two fluids, the coolant and oil, do not leak or mix at some area in your engine block and cylinder head since it can affect the operation of the engine.

The head gasket also seals the combustion chamber of the engine to allow the car to build the proper compression which is needed to maintain the power of the engine. It makes sure that the compression created by the air and fuel mixture ignition will stay inside the combustion chamber. Basically, the head gasket works by stopping the leaks while maintaining the pressure.

When the head gasket fails between the combustion chamber and the cooling system, you will notice some overheating issues. The overheating problem can be a hassle since it usually occurs in fits and starts. You can be driving somewhere and suddenly it overheats all of a sudden after driving for some distance.

It can also happen when you are driving for a short trip at a low speed. Even though you may not feel your car overheat like it would when you are driving on a highway speed, the overheating problem can still happen and simmer inside the engine which can cause damage to some components. It is for this reason why you need to look out for the early symptoms of a blown head gasket so you can address the problem before it gets too severe.

A blown head gasket can cause overheating since its sealing capability is already compromised. It will allow hot exhaust gas to leak into the cooling system and the coolant can also leak into the cylinders and be burned as steam, both of which can lead to an engine overheating. If you keep on driving a car with an overheating engine, it can cause problems such as alloy cylinder head warping or a damaged catalytic converter.

This is known as one of the most common symptoms of a blown head gasket. The oil can become milky when the coolant and the oil mix and it is a big problem. Coolant and oil should never mix since the coolant and oil can no longer do their jobs and it can cause severe problems to the engine.

This can be a problem since a contaminated oil won’t be able to protect your engine from extreme heat and friction. The coolant will no longer be able to do its job too. The moment that you notice this symptom, have your car checked right away and correct the problem. A head gasket replacement might be the only solution for this problem.

Keep in mind that if you only use your car to drive for a short distance, you may see the contaminated oil under the oil cap even if the head gasket is still good. It is normal since there may be some condensation collected while your car is parked overnight that has not completely burned up during short drives due to the engine not fully warming up. This condensation or moisture are completely burned up when your car is used on longer drives. If you use your car only for short trips, checking your oil cap for some milky build up might not help you determine if you have a faulty head gasket.

Bubbles forming in the radiator can also be one of the symptoms of a blown head gasket. The engine cooling system in your car is supposed to be a closed system, created with air pockets located at the top of the radiator or overflow tank and not anywhere else. This means that bubbles should never be formed in the radiator. If you noticed any, then it indicates a problem. It indicates that air has entered the system from somewhere and it is not supposed to be there.

This can happen when the coolant enters the combustion chamber and the internal head gasket allows exhaust gases into the coolant. This is what causes the bubbles to form in the radiator or coolant reservoir. It may seem that it is boiling even if the fluid is cold. It is an indication there are exhaust gases present in the cooling system during the combustion process and it can be caused by a blown head gasket.

Since the head gasket helps make sure that coolant will properly flow through the engine’s coolant channels, if it fails, it can result in coolant seeping into the combustion chamber where it will be burned up along with the fuel. When the coolant is burned there, it will make a sweet smelling white or grayish smoke that will come out from the car’s tailpipe. Although many cars produce white smoke when they are being warmed up on a cold day, a car that is always emitting white smoke, and not just during warm ups, most likely has a blown head gasket.  It is best that you have your car checked immediately to avoid other severe problems.

While thick white smoke is an indication of a burning coolant caused by a blown head gasket, a blue smoke coming out from your exhaust can also indicate the same thing but instead of coolant, it is burning engine oil. This symptom of a blown head gasket can happen when a gasket leak allows the engine oil to escape from the lubricating pistons and seeps into the combustion chamber. If you notice a blue smoke coming from your car, do not ignore the symptom. Have your car checked by a professional so it can be fixed immediately.

Any kind of leaks indicate a problem and external leaks can be one of the symptoms of a blown head gasket. You may notice a coolant leak below the intake or exhaust manifold when the engine is warmed up. You will know if the leak is caused by a blown head gasket when you see that there are no other cooling passages or hose installed near the gasket.

A blown head gasket between the coolant and oil passage and outside of the engine can trigger a leak. A leak might seem a small issue, but it can quickly become something too severe when the coolant level drops too low. It can cause severe engine problems. If the oil drops too low as well, it can reach on the hot exhaust which can cause a pungent smell or possibly fire.

If you drive your car and it feels fine at first but somewhere along the way, it seems that it suddenly loses its power, it can be one of the symptoms of a blown head gasket. You may also feel it happen even when you are just starting your car one morning on your way to work.

This problem can occur when the head gasket fails between the cylinders, allowing the compressed air and fuel to escape. This causes the compression of the affected cylinder to reduce. Since it won’t have the proper compression to create power with, it can lead to a loss of power. This problem can also be caused by the coolant or oil entering into the cylinder which can hinder the combustion. The compression loss can lead to a number of engine performance issues such as a rough running engine and a significant power engine reduction.

Like mentioned earlier, the head gasket functions as a seal between two of the most critical components of a car. If it fails, or becomes blown as most people call it, you will feel a sudden loss of pressure in your engine which translates to a significant loss of power in the engine.  Leaks can also start to occur and coolant will mix with the engine oil which can lead to your engine’s part not properly lubricated. And you know what happens when there is no proper lubrication in the system. It causes serious damages to the engine’s moving parts that may warrant a replacement. Something that you don’t want to deal with since the parts and the labor costs are not cheap.

While it is possible to drive a car with a blown head gasket, experts do not recommend it. You should not attempt to drive it, unless you are willing to pay thousands of dollars for repairs and part replacements. If you ignore the symptoms of a blown head gasket and continue to drive your car, you might need to replace or rebuild your engine. Your catalytic converter can become damaged too.

The moment you notice any of the symptoms of a blown head gasket, it is best that you have your car checked by a mechanic immediately. This way, you can catch the problem early enough and have it repaired without needing a full replacement. Knowing the symptoms of a blown head gasket can only be helpful if you act on it immediately and not wait before the problem becomes worse.

PrevPreviousU Joints Noise: What’s Causing It and How to Fix It
NextWhat to do with a car that needs a new engine? Next