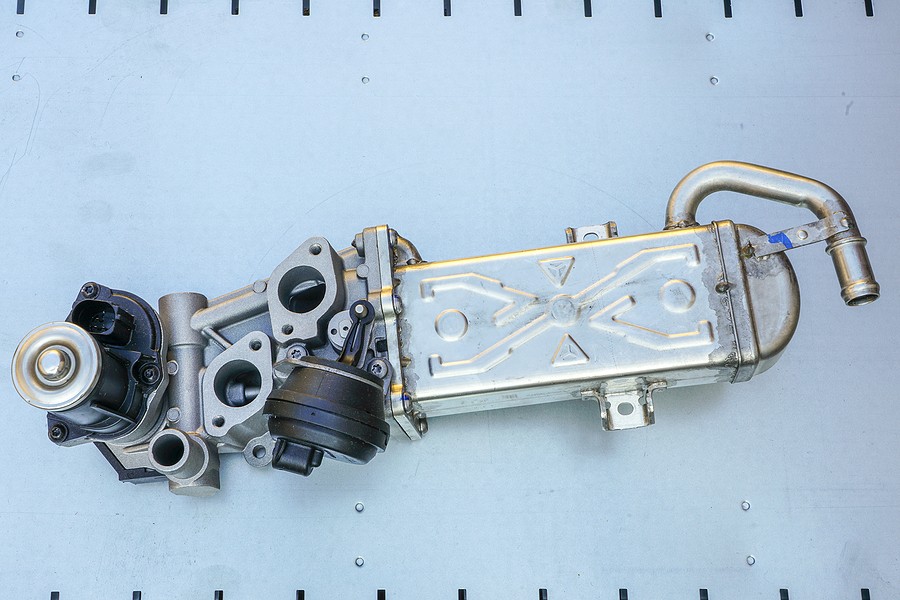 Symptoms of a bad EGR valve include check engine light illuminating, reduction in the engine's performance, spark knock, difficulty starting, and increase in the tailpipe emissions.

The EGR valve is one of the most crucial components of any exhaust system. It is responsible for reducing NOx emissions and preventing them from reaching the environment.

The EGR valve should last for a long time because it's one of the most durables components in your vehicle. However, you might get to a point where the EGR valve goes bad.

When the EGR goes bad, many complications can happen to the engine, and some might trigger the check engine light.

As a driver, you need to keep an eye for any symptom of a bad EGR valve to prevent paying thousands of dollars on more complicated repairs.

This article provides you with the top reported bad EGR valve symptoms and a rough estimate about how much it will cost you to replace the EGR valve.

What is the EGR valve, and what does it do?

The EGR valve, or what's known as the exhaust gas recirculation, is one of the most critical components in your vehicle's exhaust system. It's responsible for taking care of any NOx emissions which are considered very harmful to the environment.

While the process sounds very straightforward and easy, it must be done and must happen at the right time. The EGR cannot simply Recirculate gases at any time here when the engine must be ready to receive these gases. Otherwise, you will start dealing with complications with the engine's performance.

Regarding the EGR location, it is usually located around the engine's intake manifold, which is a perfect location 2 recirculate any guesses and send them back to the combustion system. When the engine is ready, the EGR valve can open and send any locked gases resulted from the previous combustion process and allow it to enter the cylinders in preparation for the next combustion.

The EGR operates differently depending on the vehicle's type. For instance, older vehicles used to rely on the engine's exhaust backpressure and vacuum to control the flow of these gases. In more recent vehicles, there are what's referred to as the electronically controlled solenoids responsible for monitoring and controlling the flow of these gases to the engine. These solenoids are then connected to the vehicle's computer through a long list of sensors app that directly communicates with engine if there's anything wrong with the EGR valve.

What are the common symptoms of a bad EGR valve?

Once understanding how the EGR valve works in what the other components affect the EGR valve, it can be much easier for you to expect the different symptoms of a bad EGR valve.

Let's take a closer look at some of these symptoms:

As we indicated before, in some modern vehicles, the EGR valve is connected to certain solenoids that transfer the signal to your vehicle's internal computer whenever there is an issue with the EGR valve.

Thus, about EGR valve can trigger the check engine light.

Check engine lights can happen due to plenty of other reasons. Therefore, before deciding to replace the EGR valve, you need to confirm the culprit by performing a thorough internal inspection or using an OBD2 scanner to scan the engine error.

In some scenarios, when the EGR valve is stuck closed, the engine's performance can be affected significantly, and one of the comments issues is what's referred to as spark knock.

When the EGR valve does not allow the gases to re-enter the engine, the high pressure can be applied to the engine block, resulting in severe damages if not taken care of immediately.

About EGR valve can also prevent your vehicle from starting if the problem is severe. Keep in mind that difficulty starting is another issue that might be linked to other faulty components. Thus, you need to check for any other more obvious symptoms indicating that the EGR valve is going bad.

Since the primary drop-off of the EGR valve is to reduce the amount of NOx emissions, the emissions will not be controlled when this valve goes bad.

Depending on the severity of the damage, your vehicle might not be able to pass the emission test. It is also a matter of ethical beliefs because if you know that your vehicle is emitting many bad gases to the environment that might kill a lot of people, it is definitely not a good idea to keep driving a car with a bad EGR valve for a long time.

How much does it cost to replace an EGR valve?

EGR valve replacement costs range from as low as $150 to as high as $700. Keep in mind that labor costs can be a big component in replacing your EGR valve, which means deciding where to replace this valve can determine the final bill.

One of the top locations that automotive experts suggest for replacing your EGR valve is AutoZone. According to AutoZone, buying a new EGR valve ranges from $40 to $500 on parts only.

In general, most DIYs do not work the first time. If you are experiencing a modern vehicle, you need to think about the different outcomes and evaluate your vehicle's risk.

One thing to consider is your extended warranty or your internist policy. Sometimes the warranty can cover damages in certain components like the EGR valve. Thus, do not forget and skip this step by jumping ahead and replacing the EGR valve.

Another thing to consider is reviewing your automaker's releases because certain damages are associated with some mechanical components that have to do with how the vehicle was manufactured. Thus, keep an eye for any reported releases or technical bulletins for certain vehicles, especially driving a modern car.

How often should I replace the EGR valve?

In general, the EGR valve should last up to 10 years, if not more, depending on the level of maintenance you perform.

Of course, if you notice any of the mentioned symptoms of a bad EGR, you should not rely on the ten-year threshold, and you should take immediate action to fix it to prevent further complications.

Can I drive my car if it has a bad EGR valve?

A bad EGR valve should not prevent you from driving your vehicle because it doesn't cause any disturbance to the engine's performance to shut it down. However, it will cause a difference in your vehicle's performance.

There are situations where the EGR valve can get stuck opened. If that's the case, your vehicle will suffer from severe stalling, and in some scenarios, you might not be able to start the car.

This situation does not happen frequently, and according to automotive experts, it might happen once every five years.

Whatever the situation has, since the EGR valve is responsible for monitoring any harmful gases from reaching the environment, it is your responsibility to make sure that this part is replaced immediately to eliminate harming yourself and the people around you.

What happens if you unplug your EGR valve?

There is a common misconception that unplugging your EGR valve should help reduce its damage is. However, that's not the case.

When you unplug the EGR valve, this does not mean that you're eliminating the hot gases from affecting the valve. Thus, hot gases can't easily melt the surrounding sealing around the EGR valve, further deteriorating it.

How to inspect the EGR valve?

Since most symptoms of a bad EGR valve can be linked to other faulty components, it is crucial for you to 1st perform a thorough inspection of this part.

Here are simple steps you can follow to diagnose your EGR valve:

How long does it take to change an EGR valve?

The timeline depends heavily on your vehicle type and the location where you get the job done. For example, if you decided to go to a small repair shop, the job should be completed within only one hour.

However, some tightly built models require certain intensive labor efforts to complete the job within two to 3 hours.

On the other hand, if you decided to replace your vehicle's EGR valve by yourself, the process might be longer or faster depending on your mechanical skill set level. For instance, if you are experienced with replacing the EGR valve, you can get the job done fast because you're focused on your vehicle without any other distractions in other vehicles.

If this is your first time replacing the EGR valve, it will take you much longer to learn how to do the job while preventing causing any major troubles to the surrounding components.

You must ensure that you have the right skill sets to replace the EGR valve because DIY does not work the first time, as we indicated previously.

The EGR valve is responsible for reducing the number of harmful emissions from reaching the environment. Over time of use, the EGR valve might suffer some complications which affect the engine in many different ways.

While the EGR valve will not prevent you from driving your car, you need to fix it as soon as you can to avoid dealing with undesirable complications.

If your vehicle suffers from other major problems aside from the EGR issue, it might be the right time now to evaluate the situation and think about whether it's worth fixing this car or not.

One might ask home accepts vehicles with major damages.

Luckily, Cash Cars Buyer is one of the fewest companies that accept your vehicle even if it has measured complications not only in the EGR valve but also in the engine itself.

We will pay the top dollars along with free towing despite your living location around the United States.

The process is very straightforward and involves three main steps: