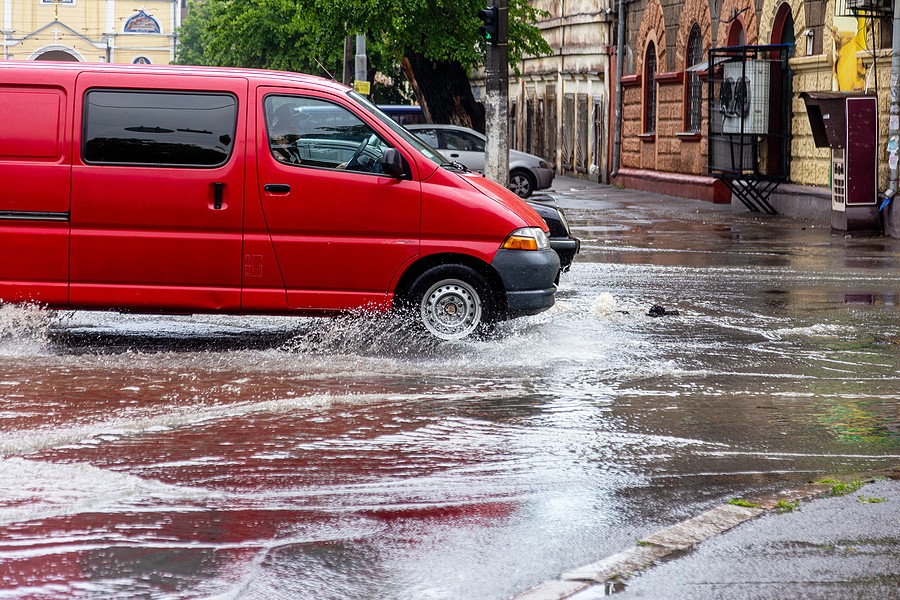 The rainy season is not totally avoidable and so is one of every car owner’s worst enemies — flooding. Unless your car is an SUV or a pick-up that can safely cruise through the flood, you don’t want getting that car submerged as flood water damage is not only very time consuming to fix but it can also be very expensive.

A parade of problems may present itself after the car has been immersed in flood so best to simply avoid it but in some cases cars still get flooded despite precautions when stuck in traffic or parked in flood prone areas. As a car owner it is important to look out for signs if your car has incurred significant damage.

Just the same with buying a second hand car, it is very important to pinpoint if the car has been damaged by flood water for not all car sellers can be open about it. Although you may not be as good as a professional mechanic, it would be helpful to at least know the tell-tale signs of a flood water damaged car so you can avoid being left with a lemon.

Here are the most common signs to watch out for in cars with flood water damage:

The most obvious sign of a vehicle affected by flood water damage has the smell of dampness. A common smell anyone has already come across from not properly drying clothes or from soaked furniture, the distinct musty smell simply cannot be dismissed. Check for the upholstery, carpet as well as door and trim panels, if they smell damp that is a clear sign that it has been wet at some point and has not been properly and quickly dried. Feel every inch of the car seats – even every nooks and crannies and you might even feel the dampness.

Unfortunately, most of the time you can not simply let the carpet and other interiors dry after flood water damage because it would most likely still grow mildew. Even with thorough cleaning it would be hard to get rid of the smell. It simply cannot be masked by air fresheners. So trust your nose. It can lead you into finding out that a car has been damaged by flood water quite easily.  Removing the carpets and putting it back in the same professional way is a task very few can do. So when you bought a car and noticed that the carpets or any other removable part have been replaced haphazardly it could tell you that the car has been water damaged or has some sort of repair previously done. Apart from the smell, mildew also poses health risks to anyone riding the car, such as developing respiratory diseases like asthma and other allergies. So in case of a car being submerged in flood water quickly put towels on the car matting and carpeting to soak up water. Don't let the water sit for long.

While older vehicles' windows and windshield fog easily the same is not true for newer models. Modern vehicles are now made waterproof. It would take a lot of moisture to cause a window and windshield fog so if you're buying a newer model vehicle and see signs of fogging better look for another car to buy. The only possible reasons for a newer car model to accumulate fog are going through some serious rain or heavy flooding.

A car’s electronics and electrical parts are always affected after flooding. The moisture can cause a short circuit in the electrical system that could result in damage of its critical components. The areas to look out for are the following:

Headlights, turn signals, brake lights and other lights – check for fog or condensation

Dashboard – reach under the dashboard and check the wirings for signs of hardened or fragile wires. This could be a sign that it has come in contact with water.

Electrical Control Unit – if the ECU got soaked have it inspected immediately by a professional mechanic.

Always remember to check if the engine is safe to start before turning on electrical parts for checking. All the switches, plugs and relays must be properly dried out before turning anything on. Make sure the battery is disconnected before you start working on your vehicle. Remove all standing water from your vehicle by using a bucket or a cup to get as much water out as possible at the beginning and then try to use a wet or dry vacuum to suck out the water from inside of your car. If there is any malfunction after checking things out that’s a clear sign of an electrical issue that must be addressed as all these electrical components are very important to drive safely, efficiently and comfortably.

There are certain metal car components designed to resist rust/corrosion as it is inevitable for rain or water to splash on them a little time and again but when they come in contact with deep flood water and become dampened by water overtime rust/corrosion can form overtime. So rust/corrosion is one of the most telling signs of flood water damage. The door panels inside a car usually are not affected by rust by a little water or when being splashed during car wash but when the car was submerged in deep flood for a long period even these car components will surely begin to corrode.

When not fixed rusts/corrosion can gradually weaken your vehicle components and affect its important functions such as shifting gears and braking. So at first signs of rust after a car has been flooded seek help immediately to remove the rust before it spreads out.

Check the engine oil, brake fluid and transmission fluid dipsticks and differential plug. If you find droplets of water on the dipstick, you will surely know that the vehicle was affected by flood water. You can even check the colour of the oil and if it looks pale, diluted, milky or mustier than its regular colour, it is probably a sign of flood water contamination. Check if the oil feels sticky to the touch rather than smooth. In that case water has probably gotten into the tank and has mixed with the oil. As we all know water in them may present damage for the internal components of the car requiring extensive overhaul and repairs.

Like for instance when water is mixed with the power steering, brake and transmission fluid and coolant reservoirs can cause rust and eventually undermine your car’s performance. If water gets into the fuel injectors, spark plugs the engine will get seriously damaged.

It is however important to take note that some synthetic differential fluids may present originally milky so when in doubt seek a professional automotive technician to make the evaluation if the fluid was really contaminated. Other areas to check are fluids in your vehicle’s fuel filter and tank and clutch.

Step on the brake pedal a couple of times before driving on and if it feels slippery it can be a sign of flood water damage. After being submerged in floodwater, brakes will most likely lose grip because of the loss of contact between the wet brake rotors and brake pads.

Check the bumpers, undercarriage, radiator area, frame and hard-to-clean areas like wheels, brakes, engine compartment, underbody and gaps under the hood. Flood water may lodge mud, dirt, grass and other debris in them. If any of these pollutants are present in the car it must be washed and cleaned immediately. Have your car professionally detailed to ensure that even the hard-to-reach areas are all cleared. The debris lodged on these areas may compromise the performance of each specific part overtime.

So is a flood-damaged car worth fixing?

The answer is dependent on how much you are willing to pay both time and money. But the rule of thumb is that if the flood water went past the floorboards of the vehicle and has managed to reach the areas where the electronics of the car are situated, then it may no longer be worth all the hassle. In reality, even car insurance companies are known to avoid spending money on flood-damaged cars. Cars are complex machines and flood water or any water in general reaching places it’s not meant to reach, is harmful to all the newer cars’ systems. As mentioned earlier, mildew and rust, short-circuiting electronics and water-logged transmissions are just a few potential results of water damage. All of them can result in a car being totalled.

When vehicles get hit by river flooding or storm surge they may not be recovered immediately and may sit for days or weeks while water saturates every of its components. This can devastatingly compromise the car’s interior, its electronics and powertrain. And even light flooding when salt water is involved does the worst damage to cars and for this many car experts agree that a salt water flooded modern car is unrepairable at any level.

Fresh water flood damage however still has some repair options available as fresh water is not as corrosive as salt water. But the options are correlated to the extent of the flooding, like its depth and duration of submersion.

If you inevitably drove into flood waters and your engine died you still might be able to repair the damages but take note of the following to avoid further damage to the car:

PrevPreviousCar Cranks but Won’t Start – 13 Problems to Watch Out For
NextPotholes or Pay: Some Warning Signs of Damage to Look Out For After Hitting a PotholeNext