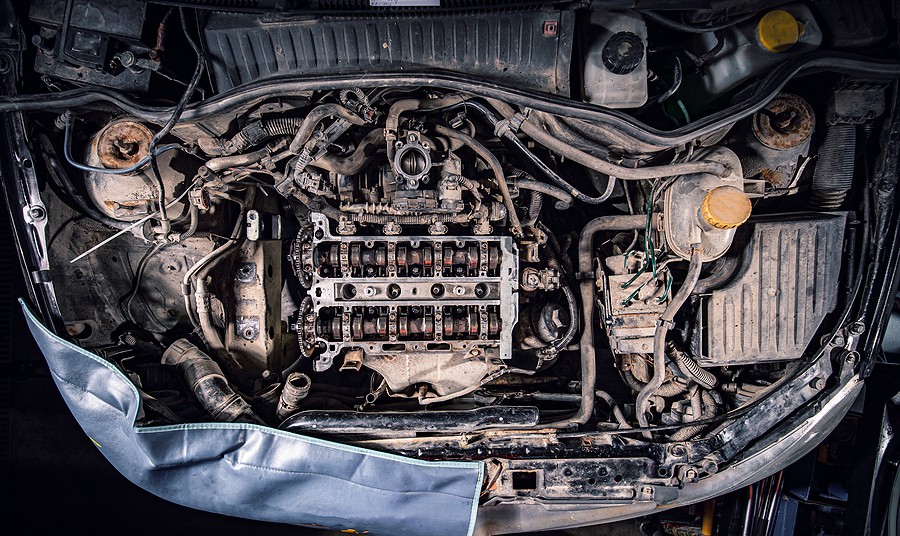 What Causes a Bad Engine?

In a few moments, we’re going to talk about some of the signs of a bad engine. But before we get into that, we want to take the chance to talk a little bit about what can cause some of the signs to show up. You should do whatever it takes to stop engine problems from affecting your car, and one good way to do this is by educating yourself with regards to what can cause issues in the first place.

If you don’t change the oil in your car often enough, that’s one of the top things that will cause you to see some of the signs of a bad engine appear. You need to keep enough oil in your car at all times, and that oil shouldn’t be any older than it has to be. It’ll keep your engine and all the parts inside of it humming along and firing on all cylinders.

But it’s not just a lack of fresh oil that can cause the signs of a bad engine to pop up. There are also other things that may cause problems with your car’s engine. Here are a few of them:

The last thing you want to deal with is a bad engine in your car. So you should do your best to prevent these kinds of problems from rearing their ugly heads. It’ll help you avoid seeing any of the signs of a bad engine.

What Are the Most Common Signs of a Bad Engine?

Now that you know what causes a bad engine, it’s time to move into talking about the many signs of a bad engine. There are so many signs that you might see while driving around in your car that will indicate an issue with your engine. You should keep your eyes peeled all the time and take notice of these signs if they appear. They’ll let you know that you need to get your car to a mechanic ASAP to have your engine serviced. Here are some of the most common signs of a bad engine.

Your engine performs a lot of different tasks within the context of your car. But its main job is to produce the power that your car needs to move forward. With this in mind, it shouldn’t come as a huge shock to hear that one of the biggest signs of a bad engine is a loss of power. If your car shuts down on you and won’t come back on, it could indicate that you need to have something repaired within your engine.

Of all the different signs of a bad engine listed here, this one might just be the most obvious of the bunch. You don’t need to be a rocket scientist to figure out that there’s something wrong with your engine when it’s not delivering the power that your car needs. You’re going to have to tow it to an auto repair shop so that they can diagnose the specific problem with your engine and talk to you about fixing it.

3. Engine Stalls Out All the Time

An engine will usually lose power completely in a worst-case scenario when there is something wrong with it. But in many other instances, your car might not cut off altogether when you have a bad engine. It’ll simply stall out on you early and often when you’re out on the road. This occurs a lot when your car’s engine isn’t able to get the right mixture of air and fuel.

When your car starts to stall out on a regular basis, it can be very embarrassing when you’re out on the road. You’re going to be stalling out at red lights and in parking lights all the time. It can also be very dangerous to drive around in a car that stalls out way more than it should. You could potentially get into an accident if you stall out and another driver isn’t expecting it. It’s why you shouldn’t ever ignore this sign of a bad engine.

Does it feel like you have to fill up your car’s gas tank every few days just to keep it up and running? If you’re driving around a lot each day, this might be normal. But if you’re blowing through way more gas than you used to, it could suggest that there’s an issue with your engine. For one reason or another, your car is using up more fuel than it should have to in order to get you around.

There could be a bunch of different things that cause this. If, for example, you don’t have enough air in your tires, that could result in your fuel economy taking a hit. Your fuel economy could also take a hit if you’re always driving around faster than usual. But an engine problem could also be at the heart of the problem. You’ll have to get your car inspected by a mechanic to bring your fuel economy back up to where it should be.

When you step on the gas pedal in your car while you’re behind the wheel, you should hear your engine roar. What you should not hear is your engine knocking, hissing, popping, or backfiring. If you hear any of these sounds coming from your engine, they’re all going to be signs of a bad engine. They’ll highlight the fact that one or more parts in your engine aren’t doing their jobs the way they’re supposed to.

At first, you may be tempted to turn up the radio to drown out these sounds. You might also hope that they just go away on their own. But oftentimes, these sounds will get worse over time and eventually lead to other sounds. Rather than ignoring these signs of a bad engine, you should take your car to a mechanic to have it checked out for engine problems.

A bad engine will sometimes produce more than just strange sounds. It might also create foul odors and send them both out into the atmosphere and into the interior of your car. These odors are going to make it almost impossible for you to drive your car around in peace. They could disrupt your ability to drive and possibly even be harmful to your health in some instances.

If you smell any noxious odors coming from the direction of your engine, it’ll often mean that the internal combustion process in your engine isn’t playing out as planned. You’re going to need to call a mechanic and have them get a whiff of your engine so that they can see what’s going wrong with it.

7. Engine Continues to Run When Car Is Turned Off

When you turn your car off and take your car key out of your ignition, what do you expect to happen? You expect for your car to turn off, of course. But that won’t always happen when you have a bad engine. You might have a failing solenoid in your engine or an issue with your carburetor that causes your engine to stay on even though you’ve tried to turn your car off.

This can put you into a tricky predicament. What in the world are you supposed to do when you’ve tried to turn your car off but it won’t turn off? You should chalk it up as one of the signs of a bad engine and bring your car to a mechanic right away. They’ll be able to turn your car off for the time being before figuring out what’s causing it to stay on longer than it should.

There are going to be times when something just won’t seem right with your car’s engine. It’ll run rougher than it usually does, either when you’re driving or when you’re idling in place. It’s going to let you know that there is something wrong with your engine. You might have spark plugs that need to be replaced, or you might have some kinds of clogs in your engine system. Either way, an engine that’s running rough isn’t going to clear up on its own. You should take this as a sign of a bad engine and have your engine evaluated by a mechanic sooner rather than later.

How Much Will Engine Repairs Cost?

When people see the signs of a bad engine while driving around in their car, the first thing they usually do is panic. They do this because they’re worried about what it’s going to cost them to fix whatever is causing their engine problems. In certain cases, this might be justified. If you need to have, say, a timing belt replaced to repair your engine, you could be looking at paying upwards of $700 for it on average. But there are also some engine-related repairs, like spark plug replacement, that are only going to cost you a couple hundred dollars.

All of the being said, it’s going to be difficult to determine what engine repair will cost you until you figure out what the problem is. And the only way to do that will be to work with a mechanic you trust to get to the bottom of it. They’ll be able to let you know what the issue is with your bad engine and what it’s going to cost you to repair it.

Is It Worth Repairing a Bad Engine?

If you fall into either of these categories and you’ve seen the signs of a bad engine, you may want to consider giving junk car buyers a call to get an offer for your car. They’ll pay you cash for your car and help you avoid having to make any engine repairs to it. Cash Cars Buyer is one great example of a company that will give you top dollar for your car. Contact us today if you’re experiencing engine problems with your car and want to sell it rather than fixing it.