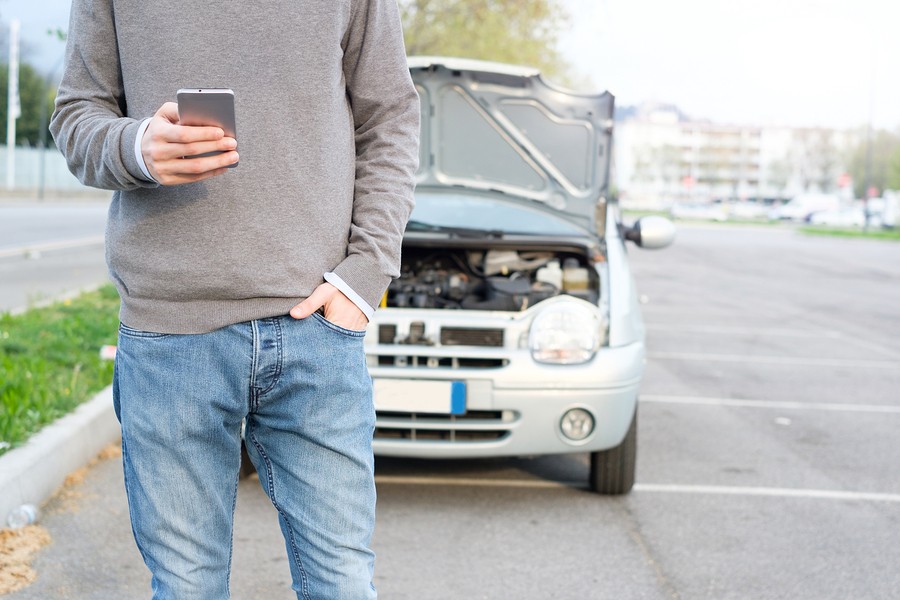 Realizing that your car has a seized engine can be incredibly stressful and frustrating. You do not know whether it can be fixed or whether you will be able to afford the necessary repairs. You need to decide what makes the best sense for your situation, given the high costs of engine repairs.

Sometimes, repairs will be relatively affordable, but it is more likely that they will be expensive. If you cannot afford the repairs or simply do not want to pay for them, you could sell your car as-is instead. This way, you get cash in your hands that you can put toward buying a new or used car that runs. Before you can decide what to do about your engine, you need to be sure that you are experiencing engine seized symptoms. A mechanic can easily confirm that this is the problem. Your engine may also be locked for other reasons, so you need to rule them out.

Most of the time, if you start your car only to hear a loud clunking noise unexpectedly, then the car turns off and will not go back on, despite the battery being in good shape and the tank being full, you have a seized engine. How to check if the engine is seized or how to tell if your engine is seized usually comes from trying to turn the car on and it refusing to do so.

Get an Offer for Your Car in Cash and Stop Worrying About Your Seized Engine!

Before you can learn how to fix a seized engine or if the repairs are worth it, you need to understand what does seized engine mean. Engines seize from mechanical failure.

In most cases, this comes from a lack of oil. The oil may not be circulating properly or you may have no oil. When this happens, there is no internal lubrication, so the metal parts create friction as they rub against each other. In extreme cases, this can even lead to various bearings welding against other parts.

This type of problem can occur if you let your engine run out of oil or if you do not take care of oil changes regularly. It is also possible to experience a no oil seized engine due to sudden interior failures of the engine or issues with the engine oil pump. In addition to situations where no oil seized up engines, this can also happen due to low oil. It will have a similar cause.

Engine Seized Due to Lack of Oil? We’ll Buy It Anyway!

It is also possible that your engine will seize when it has enough oil. In this case, it would be because you did not run the auto enough. That particular cause occurs when rust “freezes” the piston rings onto the cylinder walls. You can prevent that cause of a seized engine by running your car occasionally.

You may also be dealing with a hydrolocked engine. This happens if water enters the combustion chamber of the engine. This makes the piston unable to make the top of the combustion stroke since the water does not compress in the same way that the air-fuel mixture is designed to.

If your engine is hydrolocked, it will likely stop working suddenly. If you get lucky and this happens at a lower speed, you may have minimal damage to the engine. However, if the RPMs are greater when it occurs, expect damaged pistons or bent connecting rods at the very least. Hydrolocked engines usually happen when water enters the engine via the air intake. That is most common if you accidentally drove through high water.

Want to Avoid Expensive Engine Repairs? Get a Quote and We’ll Buy Your Car As-Is for Cash!

Your engine may also be vapor locked. When this happens, the engine will not start due to an issue with the fuel system. This problem is more common in older vehicles that have low-pressure fuel systems. The gas in your fuel pump or fuel lines converts to gas from liquid, but this takes fuel from the engine, starving it. You can recognize a vapor lock by the engine sputtering and losing power before turning off and refusing to turn back on.

Vapor locked engines almost always occur because of extreme heat. The fuel temperature rises, causing it to turn into vapor. Since your fuel pump is not designed to move fuel vapor, it stops working.

Engine Seized? No Matter the Cause, We’ll Offer You a Fair Price for Your Car!

Overheating would be the cause of the vapor locked engine and it can be due to a number of causes, including a bad water pump, a thermostat that is stuck close, low coolant level, or a leaking hose.

Although less common, your engine may also seize if the timing chain or belt breaks as you drive. In this case, expect the seized engine sound to be a loud knock, followed by a sudden stop.

Seized Engine Not Worth Fixing? We Buy Your Car for Cash, With or Without a Seized Engine!

How to Free Up a Seized Engine – Your First Steps

If your engine seized up and you diagnosed the seized engine symptoms, it is time to learn how to free a seized engine.

You may get lucky and be able to fix it yourself right away. Switch your transmission to neutral and get to a safe spot if you are not already. Just try to turn the engine over one or two times. Make sure you do not keep trying past that, especially if it will not crank. You could cause more damage and end up needing to do more than repair a seized engine.

Can’t Afford to Fix the Seized Engine? We Will Buy Your Auto for Cash Anyway!

What About a Locked Engine?

You will need to figure out what caused your motor to lock before you can resolve the issue. If your engine seized while driving, then you are in for some expensive repairs and will need to consult a mechanic. How to fix a seized engine no oil may be as simple as using the best penetrating oil for seized engines.

If your engine seized from sitting, start by removing the spark plugs from the cylinders. Fill each cylinder with engine oil and wait several days. You can then try to turn over the engine with a breaker bar. The results of that attempt will determine if you need to rebuild or replace the engine or can just repair it.

See If Your Seized Engine Is Worth Fixing or If You Should Sell It to Us for a Fair Price.

In the case of hydrolocked engines, remove the spark plugs immediately and crank your engine. This should pump the water from the cylinders. You may get lucky and have a low seized engine repair cost, assuming no interior damage occurred.

In the case of vapor-locked engines, let your car cool off so the fuel vapor gets cold enough to condense. You can either just wait or splash ice or cold water onto the fuel pump as well as the lines.

Seized Engine Needs to Be Replaced? Get Cash for It Instead and Buy a New Auto.

Can You Fix a Seized Engine?

In addition to knowing how to tell if an engine is seized, there is some confusion about whether there is a seized engine fix. Some people will say that you cannot fix a seized engine, but it actually depends on the situation.

It will depend on the cause of the problem. An engine seized due to a lack of oil where you catch the problem early may be able to fix it. The same may be true of a bad starter or seized engine. However, if the same problems occur and you do not take care of them right away, they may cause damage to other parts of the engine. If a Briggs and Stratton engine seized no oil, the damage may be too great for repairs.

Every case is different and while you can learn how to break loose a seized engine, it is not possible to know how to unlock a seized engine in every case. Sometimes, it is just impossible, even for experts. Generally, if the answer to what does a seized engine sound like is louder and more noticeable, this will indicate more extreme damage that is harder to repair.

Get a Cash Value Offer for Your Vehicle to Decide If It Is Worth Fixing.

Freeing a Seized Engine – What Does It Cost? Knowing why a seized engine occurs is one thing, but you also need to know how much it will cost to repair. Unsurprisingly, the cost varies based on the cause and the extent of the damage. If you are lucky with a problem from a hydrolocked engine, you must have to pay for an oil change and some new spark plugs. Or you may have to pay thousands to replace your engine or rebuild it. If the problem was due to the fuel pump overheating, you will probably have to replace it, which can cost between $500 and $1500.

Is Rebuilding an Option?

You might be able to rebuild to fix a no oil seized engine, but that would be expensive and may not be possible. The mechanic would have to carefully examine your auto and take it apart, then spend hours of labor rebuilding it. Even if the mechanic cannot rebuild the engine, it will likely take them hours of labor to determine that this is the case.

Don’t Want to Wait for an Engine Rebuild? We’ll Buy Your Car With Its Seized Engine.

When You Need to Replace the Engine

In the case of an engine that must be rebuilt or replaced, expect it to cost you at least several thousand dollars, $3,000 at a minimum. The cost will depend on the make and model, as well as the labor involved and whether you choose a new or rebuilt engine.

Prevention Is Better Than Repairs

Ideally, you want to do what you can to prevent your engine from seizing. The most important step to do so is to follow your manufacturer’s service schedule. This includes the schedule for oil and coolant checks and changes and timing belts. You should also check out any odd noises right away.

Your Engine Seized Despite Preventative Maintenance? Accept Our Cash Value Offer for Your Car.

Or Sell Your Car to Cash Cars Buyer If you do not want to take care of repairing your seized engine or worrying whether it is even fixable, consider selling your vehicle. Cash Cars Buyer makes it simple to sell your car, saving you the time and effort you would have to put in if you were to do so privately. We accept vehicles regardless of their condition, so you do not need to make any repairs before you sell to us, like you would with a private buyer.

Just request a quote for your car, SUV, or truck with its as-is condition. We offer you a fair price based on the condition of your vehicle and some basic information regarding it. You can choose whether to accept our offer, with no strings attached. We not only give you cash for your auto, but we also go pick it up for you without any hidden fees. This way, you get your non-functional vehicle off your driveway or out of your garage and get cash in hand.

Whether you cannot afford repairs for a seized engine, the repairs cost more than your car is worth, or you simply do not want to deal with repairs, we will gladly buy your ca