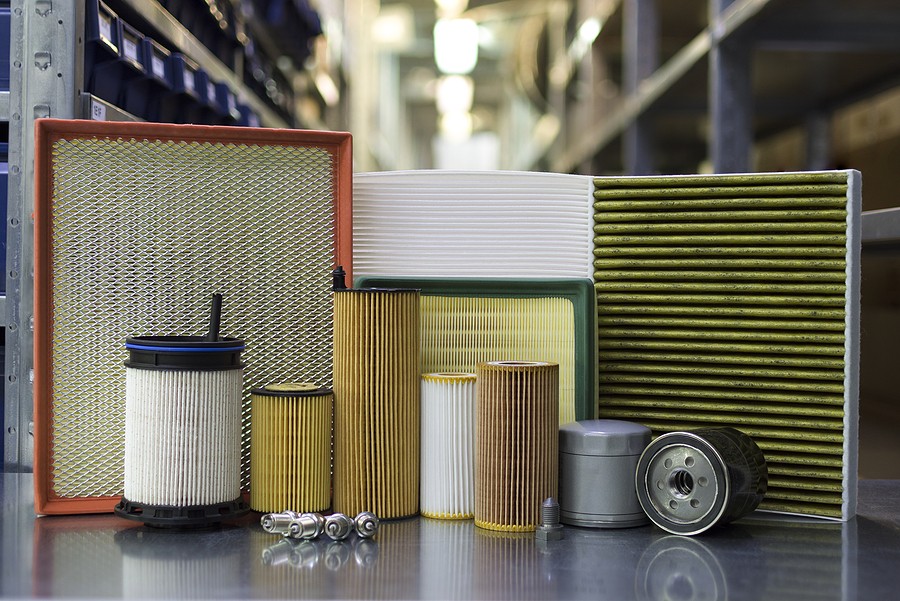 Fuel filters are an often-overlooked part of a car that most of us don't consider. Everyone knows that oil filters need to be changed on a routine basis, but your fuel filter does as well. Fuel filters, as the name suggests, help filter out dirt, debris, and many other contaminants that may be in your gasoline on their way from the fuel tank to your engine. Since you definitely don't want to be burning contaminated fuel, they provide an invaluable service. Not to mention the fact that contaminated fuel would clog your injectors and potentially gum up your engine which could lead to serious repair bills down the road.

Because a fuel filter's job is to collect gunk and grime, eventually it is going to become too clogged to function. That means you need to get it replaced. It's a part of routine maintenance, but it's one that many drivers do forget about. If you haven't changed your fuel filter in a few years, or ever, here's everything you need to know about getting your fuel filter changed.

How Much Does It Cost to Replace a Fuel Filter?

If you need to take your car to a mechanic to get a fuel filter replaced it is not going to be a super expensive job, but it's still going to set you back about $100 to $150. That's for parts and labor. If you're interested in handling the job on your own you will save some cash because you can head to a site like AutoZone and get a new fuel filter for anywhere between $5 on the cheap side to $50 on the more expensive end. It’s worth remembering though that you can't just use any fuel filter on any vehicle, you have to get the exact right one that goes with your car.

What Are the Symptoms of a Bad Fuel Filter?

Since it's your fuel filter's job to help remove debris and contamination from the fuel lines before the fuel gets to your engine, it is going to get clogged eventually and that will decrease its functionality. If the filter isn't swapped out soon enough, it will become so clogged that your car won't work. The average lifespan of a fuel filter is around 30,000 miles to 50,000 miles. That works out to maybe two to five years worth of driving, depending on how you drive your car. Before this happens, there are some other symptoms that you could be on the lookout for to let you know that your fuel filter is in need of a change.

If it's become a consistent issue to get your car started every time you get into it it's possible that you have a clogged fuel filter preventing the proper flow of gasoline. When it is partially clogged then you'll still have issues getting gas to the injectors in a timely manner which will cause your engine to struggle before it gets started every time.

When you put your foot on the gas you are increasing the demand for fuel to get to your engine. Normally your fuel pump works harder and the fuel flows more quickly to the engine to accommodate the increase in demand as you're accelerating. Of course, if you find that your vehicle is very slow to accelerate then it's possible that your fuel filter is inhibiting the flow of gasoline so it can’t meet the demands that you're putting on it.

If your car starts sputtering when you're driving at low speeds, then this is likely caused by a clog in your fuel filter. It won't be so bad that it shuts your engine down, but you will notice it struggling and sounding like it's having a hard time keeping it moving.

When the clog in your fuel filter gets bad enough then you are going to graduate from just having a sputtering engine to an engine that actually shuts down on you. Often this means you'll get it started and you'll be able to start driving, but if you come to a stop at a corner or a stoplight the engine will shut down on you again.

Misfires occur when you're not able to have the precise combustion reaction of one of your cylinders when you're supposed to. The air and fuel mixture is off or the spark happens at the wrong time, but the cylinder will not fire in sequence. When your fuel filter is clogged up then it won’t be able to transmit the right amount of fuel to the injectors which in turn can cause a misfire by preventing the spark from igniting the fuel mix at the right time. If this happens frequently then it's a good sign you're not getting the proper amount of fuel sent to your engine so you might want to check the filter to see if that's the issue or not.

How Long Does It Take to Change a Fuel Filter?

If you've opted to try your hand at changing the fuel filter yourself at home, then you'll be happy to know that this is not a very in-depth job by any means. In fact, although it is somewhat difficult to get to, it should only take you between 10 and 20 minutes to get your fuel filter out and replace it with a new one. The only real concern you have when removing this is that you relieve the pressure first before you get the job done.

How to Change Your Fuel Filter

Before you go about changing the fuel filter on a car that has fuel injection, which should be any vehicle made since the 1980s, you need to make sure that you're disabling your fuel pump first. This is important for relieving the pressure on the fuel lines. If you don't relieve the pressure that pressurize fuel is going to spray out at you and that's definitely not something you want to experience.

Step 1:  You have to start by relieving the pressure on your fuel line. Turn your engine off and remove the fuel pump fuse from the fuse box. You can find the location of this in your owner's manual. The fuse can be popped out easily enough with a pair of needle-nose pliers.

Step 3:  Turn the engine off again.   Now that your fuel pump is disabled you are able to start removing the filter.  You can also put the fuse for your fuel pump back in place now just so you don't forget about it. Since you won't be starting your vehicle again, it won't matter in terms of how you remove your fuel filter.

Step 4:  Now you can disconnect your battery. Remove the cable from the negative terminal first, that's the black one. This is just a safety precaution to ensure that no one accidentally starts the car on you. It may not seem like a necessary step, but it's never a bad idea to be as safe as you can.

Step 5: It may take a little work to discover where your fuel filter is if you don't already know. They're not in a standard position from one car to another, which shouldn't be a surprise. Not every single part is standard from one vehicle to another after all. There are a few common locations for fuel filters however, so expect to find it either along the fuel line under your vehicle or possibly in the engine bay of your vehicle. There are other locations that it may pop up as well, so again refer to your owner's manual or Google the make and model of your vehicle to find out for sure.

Step 6: If necessary, now is a good time to get your car up on jack stands if you need to get underneath it. You also need a container to catch fuel run off. Remember that certain kinds of plastic will melt when they come in contact with gasoline so be sure you've got something that is suited to hold it.

Step 7: Your fuel filter is held in place by several clips. The filter itself will look like a small metal cylinder, not unlike an unlabeled can of soda.  You can use a flat head screwdriver to remove the clips, just be careful when you do so because they are very delicate and there's a good chance you might break them. Fortunately, if you've bought a new fuel filter you can buy replacement clips along with it and you can use those as backups. Just make sure you have them handy because the possibility of breaking them is not too unbelievable.

Step 8: You should be able to remove the fuel line from your fuel filter now. Hold the line away from the filter and then pull it off on either end to fully release the filter. As you remove each line, direct them carefully towards your container to take any excess gasoline.  You want to have gloves and goggles on to do this job, especially if you're under the car just to avoid splash back in your face.

Step 10: Put your oil filter aside and install the new filter. As long as you're sure it's exactly the same as the old filter, it needs to be precisely the same shape and size as the one that got removed or it won't work. If it's the right one, slide it in the same way you removed the old one.

Step 11: With the new filter in place, reconnect the fuel lines at either end. Now you can use the clips that you removed to secure it in place. If they broke, use your replacement clips. That's as much work as is necessary to change your oil filter out and put the new one in.

Step 12: Reconnect your battery at this point and you can safely start your vehicle again. Remember that you depressurized the fuel lines before so when you try to start it now it may sputter a moment as it tries to build up the pressure in the fuel lines once again. It should only take a couple of minutes tops though and then you should be good to go. If you can't get your vehicle started again, then something went wrong in the replacement and you'll need to go take a look to make sure everything's been reattached probably.

Fuel filter replacement may sound intimidating if you've never had to go through this kind of job before, as you have seen the whole process is not that difficult. It is something that most drivers should be able to handle on their own at home. If you don't want to take on responsibility yourself, a professional should be able to do it fairly quickly and cheaply as well. In order to maintain the proper functioning of your car you definitely want to make sure you're getting this job done on a scheduled basis. If you let it go for too long, you risk causing some serious problems with your car that could leave you stranded on the side of the road if your engine shuts down because of the poor fuel flow.

If you're suffering from any of the symptoms we mentioned, make sure you consider your fuel filter as a possible reason for the troubles you're having and if you haven't had it replaced in a few years or 30,000 to 50,000 miles, then consider having your fuel filter replaced.