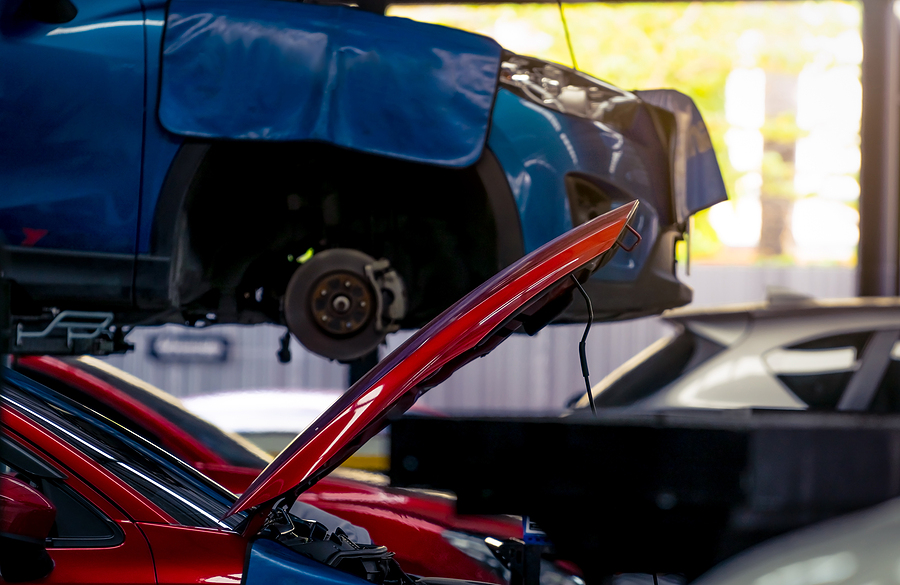 If you notice your car is misfiring in idol, presenting poorer MPG, or flashing the check engine light, the PCV valve may be to blame. This valve controls the flow of emissions, helping take care of the engine and the environment. If the valve breaks or becomes clogged, it will cost up to $85 to replace.

Across Chicagoland, drivers go for routine oil changes every day. They also go emissions tests due to Illinois state regulations. How are these two occurrences related? They both might require giving your car engine’s PCV valve some thought.

In basic terms, the device prevents fumes created from the combustion from hanging out in the crankcase with the engine oil. The mix of oil and fumes creates a muck that damages the engine. If pressure builds, gaskets and seals are also at risk of failure.

In other words, it’s an important little part!

PCV is short for positive crankcase ventilation. PCV valves came into the car world in the 1950s. In 1964, it became a requirement to have a PCV valve in a car so that waste gasses were abated. Today, the piece is considered an important way of control emissions (pollution from auto exhaust).

Older cars in particular may have PCV valve concerns, but the piece can bust in any vehicle at any time due to manufacturer defaults, excessive wear, failure to check the part during routine maintenance, or just bad luck.

Nowadays, the part can bring frustration as many people don’t know what it is until the mechanic says it needs to be replaced.

Learning about the part’s use, symptoms of failure, and the associated costs will empower drivers to take better care of the vehicles.

What Does the PCV System Do?

The car’s PCV Valve and associated PCV Valve System are fairly straightforward. There are gasses that make their way through piston rings (blowby gasses). This air cannot build up or the pressure in the crankcase will cause major issues!

Before the addition of PCV valves to cars, a tube allowed the gasses to escape. It was an efficient way of solving the pressure problem, but as time went on, people were annoyed by the dripping oil that also fell from the tube.

As time went on, engineers began to find ways to reduce emissions and oil leaks altogether by using the PCV valve.

The modern day PCV Valve takes the crankcase gasses and cycles them back into the engine. This reduces loss, emissions, and the risk of dripping oil in the process.

How does the PCV Valve Break?

If your check engine light pops on, it could be a simple fix – it could be the PCV Valve.

The PCV valve is in fact a valve, so it opens and closes. It can get stuck in the open or closed position, causing different types of problems.

When the system breaks down, the blowby pressure adds up fast, causing the seals to bust. From there, the air filter collects oil until the pressure flows in the opposite direction toward the inlet filter.

Either way, the part will be replaced (price tag: about $85).

How Often should the PCV Valve Replaced?

The PCV valve doesn’t break as often as one might think. In fact, in some cars, the PCV valve never goes bad. That being said, you should have checked it out during oil changes, tune ups, and if symptoms of a broken PCV valve begin to pop up on your commute.

What are the Signs of a Bad PCV Valve?

Here are some signs that your PCV Valve may be no good:

To know if the PCV valve is good, you can try to find it in your engine on a hose. It looks like a little straw with a bend.

It’s a valve, so imagine something that lets air out. Mechanics say if you can locate it, and give it a little shake, you’ll know how it’s doing. If there’s rattling, it’s probably okay.

A closed or blocked valve won’t make noise when stirred. That’s because the gunk inside has stopped the piece from functioning correctly.

It’s a small part, but it can cause some big problems. If the mechanic says the PCV valve is bad, and nothing else, you can thank your lucky stars the problem was caught early enough to avoid major headaches and pricey repair bills.

The part itself is fairly affordable at only $10 or $15. With labor, drivers can expect to pay up to $85 for the replacement.

What is the Engine Code for a PCV Valve that Needs Repair?

One of the most common indications that the PCV Valve needs to be replaced is that the check engine light is on.

In Illinois, this might catch the eye of the emissions inspector who will then require the car to be repaired by a mechanic to pass the emissions test.

It isn’t always clear that the PCV valve is to blame for the ails, so a quick read at the auto parts store may not do the driver justice on this one. Avoid the DIY route, and visit a mechanic.

Is it Worth It to Repair PCV Valve in an Older Vehicle?

The PCV Valve alone isn’t actually that bad of a problem to have in an older car. Many people find out they need it replaced when they notice car engine noise, having problems starting the car, see an oil leak, or identify sludge under the hood.

Others only find out about the problem when their car fails an Illinois emissions test or the check engine line comes on.

Either way, at only $85, the repair doesn’t break the bank.

In Illinois, by the way, some cars are exempt from the emissions test (older than 20 years old, for example). However, the PCV valve is a repair that cannot be skipped. As engine sludge builds, you could ruin your entire vehicle.

Just because you think you can ignore the problem doesn’t mean you should.

Driving an old car can be a lot of fun. There’s usually not a car payment. It’s an interesting possession as many people give up on retro rides fairly quickly. Sometimes the cars are iconic in their own right, and that makes getting from point A to point B all the more fun.

Then again, old cars can be a disaster. If you buy a lemon, you could find yourself shelling out thousands of dollars repair after repair. The high costs start to make the driver wonder if the old car is worth it. It may not be!

If the value of the car is lower than the cost of the repairs, and you have no special reason to keep driving the car (only option, sentimental, classic car, family heirloom, etc.), then no, the repair costs are not worth it.

If it’s just the PCV valve, and you can find the part, go ahead with the repair.

The bill won’t be more than $100 in most cases. However, if the PCV valve has been bad for a while, and there’s significant sludge or blown gaskets and seals, the costs will rise substantially.

If you find yourself in this boat, get a new car- or at least get rid of the one you have right now. There are better options.

For example, you could send the old car to a junkyard. In doing so, you enter a win-win situation. The car is taken off your hands, and the junkyard pays you cash for the old vehicle. The money might be put toward a new car, gym shoes, or a bus pass.

The most important advice regarding the PCV Valve and associated repairs is don’t wait on it.

If you see that check engine light on, visit the mechanic as soon as possible. Other symptoms of a bad PCV valve are noticeable sludge in the engine, an oil leak, a whistling sound, and blown gaskets and seals.

Many of these signals reveal not only that the PCV valve needs to be replaced but also that a greater amount of damage has already been done. Be prepared for a high repair bill.

If it’s just the PCV valve, and it’s caught early, the repair is quick and affordable at about $85 total.

The modern car has included the PCV valve now for decades. It’s a piece that protects the driveway and the air we breathe.