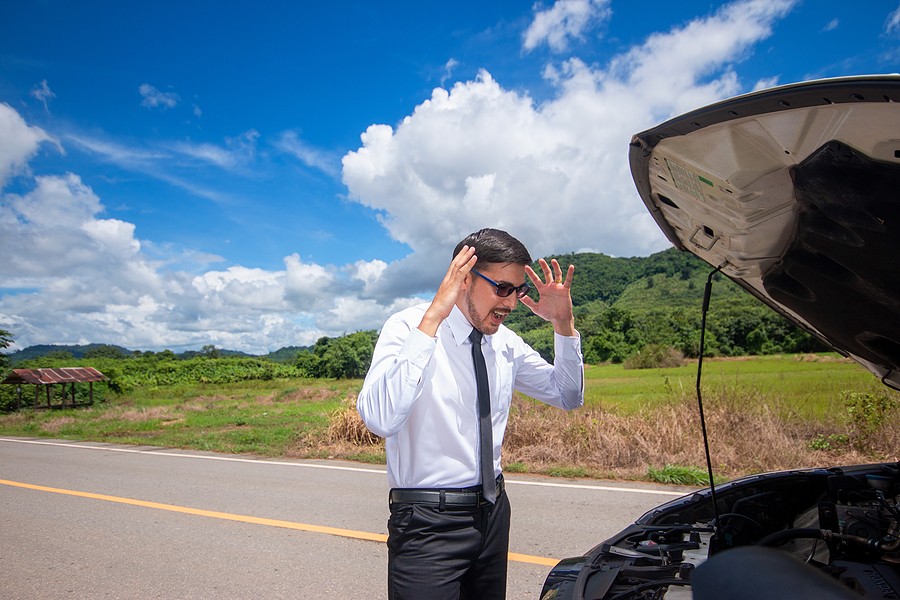 While most engines are designed to run within a normal temperature range, which is usually around 195 to 220 degrees Fahrenheit, it can happen that the engines run hotter than normal due to some issues. This should not be the case since engines need to run at their constant operating temperature so your car can provide good fuel economy, proper emissions control, and best performance. An overheating engine is caused by issues such as low coolant level, broken water pump, cooling system leaks, radiator problems, faulty thermostat, belts and hoses problems, and broken radiator fan.

An overheating engine is caused by these problems but in general, it is caused by heat not being able to exit the engine compartment due to issues within the cooling system. But, no matter what caused an overheating engine, you need to have it fixed immediately since failing to do so can cause serious, if not permanent, damage to the engine. Depending on what caused it to overheat, fixing this issue may require you to have a coolant flush, oil change, topping up oil or coolant, thermostat replacement, radiator fan replacement, water pump replacement, or a coolant hose replacement.

Overheating Engine: What Happens if the Engine Overheats??

What happens if the engine overheats? How will you know that you have an overheating engine? When your engine overheats you may experience any, if not all, of these signs.

One of the signs of an overheating engine is when you see coolant leaking under your car. It can happen since when your engine has overheated, it could boil the coolant within the radiator, causing the excess liquid to be released by the overflow tank. This is done to relieve the high pressure that has been created. Plus, a leak in the cooling system means there is no sufficient amount of flowing coolant in the engine which makes it more susceptible to overheating.

When you hear ticking noises while you are driving, it can be an indication that you have an overheating engine. The ticking noises can occur when oil in your system can no longer lubricate the engine’s moving parts properly. When the engine’s temperature is too high, its mechanical parts will be clanking against each other and you will be able to hear it. When this happens, expect that these components will wear at a much faster rate.

Engines usually become hot when they are running, but you should be able to place your hands on the hood for about 10 seconds without burning them. However, if your car’s hood is so hot that you won’t be able to touch it, then it is an indication that you have an overheating engine.

When the temperature of your engine increases, enough to start burning oil, it will emit a distinct odor which is referred to as a “hot smell”. This can be caused by plastic valves, rubber seals, and portions of resin holding the entire engine together starting to melt as the engine temperature continues to increase. When these components start to melt it will release this distinct smell. When you notice this smell, it is best to pull over, stop your car, and call for help.

If your car has an overheating engine and the valve becomes stuck, the coolant trapped in the engine block will become extremely hot. Thumping or knocking noises can be heard in the engine area when the cold coolant comes into contact with the overheated coolant. To correct this problem, you may have to replace the faulty thermostat.

If you notice steam coming out from your car’s hood, it is a sure indication that you have an overheating engine. It is important that when you notice this, you should pull over and turn off your car immediately. The steam is created when the coolant in your system has reached its boiling point and it has converted into steam, building pressure within your car’s cooling system. You will spot the steam coming out from your hood’s sides and front when it escapes from the radiator cap or coolant reservoir.

When the engine overheats, it can no longer supply sufficient power to keep your car running at the rate you want it to run. If you notice that your engine is not providing enough power like it normally would, and you notice other signs such as unusual noises or smells, then it is likely that you have an overheating engine.

An overheating engine is caused by a number of issues, but in general, it is caused by problems within the cooling system and heat not being able to leave the engine compartment. What causes engines to overheat? It can be caused by any of the following problems:

Coolants are responsible for keeping the engine cool. It absorbs excess engine heat as it circulates through the system. If the coolant is too low or is contaminated, it can cause your engine to overheat. That is why it is important to check your coolant level regularly and top it off when needed.

When the water pump’s impeller vanes are severely damaged due to corrosion or have come loose from the shaft, it can lead to an overheating engine. A broken water pump with an impeller that doesn’t spin can cause overheating since there will be a limited, or no circulation at all, of coolant through the engine.

Using or installing the wrong pump on your car can also cause overheating. This is because there are some engines that have serpentine drive belts that need a special water pump that turns in the opposite direction of the ones used on the same engine with standard V-belts.

Internal coolant leaks can happen and it is usually caused by a cracked engine block, faulty head gasket, or cracked cylinder head. When this happens, it can cause cross contamination between the coolant and oil inside the engine, resulting in a fluid intermix. The coolant can also find its way into the combustion chamber of the engine where it will be burned and used. This can cause a low coolant level and an overheating engine.

A radiator is part of the engine’s cooling system and it is responsible for eliminating excess heat from the engine. If the airflow through the radiator has been blocked with dirt, insects, and other debris, its ability to dissipate heat will be reduced. When deposits accumulate and there is internal corrosion, it can also block the coolant flow.

If your radiator is clogged, you need to have it removed and cleaned. If the radiator is extremely damaged, you may have to replace it. However, if it can still be cleaned, you can backflush your cooling system or use chemical cleaners to remove rust and hard water scale from it. Also, if you are refilling your cooling system, you need to make sure that it will be completely full to make sure that there will be no air pockets. Air pockets in the heater core heads, and below the thermostat may interfere or block circulation of the coolant.

A faulty thermostat that is stuck in a closed position can prevent the coolant from circulating from the engine to the radiator. This should not be the case since the thermostat is the one responsible for keeping the engine within its normal operating range. If it fails to open, the flow of coolant will be blocked and it will result in an overheating engine.

A loose belt may slip and this can keep the water pump from circulating coolant at an appropriate rate and it might prevent the fan from turning fast to allow proper cooling. When this happens, your engine will most likely overheat.

When the radiator hose is pinched or the lower hose is collapsing or blocking the flow of coolant when the engine is operating, it can also lead to an overheating engine. This is because the lower house often has a metal reinforcing wire inside it, which looks like a large spring, helping prevent the hose from collapsing when the water is pulled through the hose. If the said wire has failed or is missing, the hose will collapse and it may cause leaks which can lead to an overheating engine.

If you notice that you have an overheating engine only when you are sitting in traffic, and your temperature gauge gives normal temperature readings when you speed up, then it is an indication that the problem is caused by a faulty radiator fan. This can happen since normal airflow can cool down the coolant in the radiator while you are driving and when you are driving slowly or just sitting idle, the fan will keep the air moving which cools down your coolant. If the radiator fan fails to function at all, it won’t be able to cool your coolant down when you are sitting idle or driving slowly.

Overheating Engine: How Do You Fix a Car That Overheats?

Fixing an overheating engine means you need to fix the problems that caused your engine to overheat. You may have to do a coolant flush, top off the fluids in your car, repair or replace the faulty water pump, radiator, radiator fan, thermostat, coolant hose, and belt, and correct cooling system leaks.

If you are driving and you notice signs of an overheating engine, how do you fix it? What should you do when this happens?

The moment you notice signs of an overheating engine, turn off your car’s AC so it won’t add more stress on the engine. Then crank the heat up to maximum since this can help pull the heat away from the engine, keeping it from overheating and giving you enough time until you can safely pull over.

Find a safe spot to pull over and turn off your car. Wait for about 15 minutes or more and allow your engine to cool down. Pay attention to your temperature gauge and wait for it to go back to its normal range. While waiting for your engine to cool down, you can think of ways on how to get your engine checked or how you can get out of the area in case your car can’t be driven again. You can either call a friend or call a tow truck.

If the engine has cooled down, check your coolant level. If it is low, you can top it off, if you have any coolant with  you, to help protect your engine and keep it from overheating just until you can have your engine checked and the problem fixed. But if the overheating engine is caused by a broken radiator fan or a blocked hose, adding coolant won’t help.

If your car can still be driven and does not need any towing, you can turn your engine again and take your car to the nearest car repair shop. Always pay attention to the temperature gauge in your dashboard while driving. Pull over safely and allow your engine to cool down again when you notice that the temperature rises again.