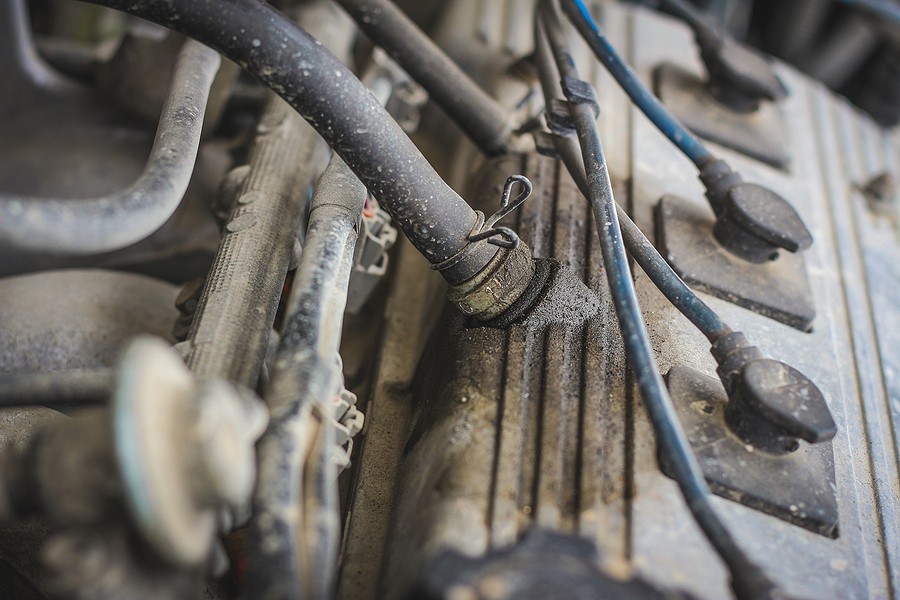 Engines have to be lubricated to lower friction and allow smooth operation. That lubrication is made possible by oil passing through them. Oil prevents your engine from getting damaged. To keep that oil in the lubricating system vehicles have an oil pan and it's important that it doesn't leak out. Underneath the engine, you'll find the oil pan. It acts as a reservoir for the oil as it circulates through the engine's passageways and runs through the various components. An oil gasket or oil pan gasket is located between the engine block and the oil pan. The gasket acts as a seal, keeping the oil in place when it cycles from the oil pan to the engine block and back.

Your vehicle's engine is a closed system, which means that all of the oil and coolant in it is recirculated and reused, and it should not escape its bounds. Your engine has gaskets and seals to keep oil and coolant from seeping out because it has so many metal pieces connected together. Gaskets are the final line of defense against leaks in your engine.

Oil would seep out of the pan if there was no oil pan gasket, and oil would not be able to circulate correctly to the engine. However, because oil is always flowing, no vehicle is immune to oil leaks. Oil leaks are frequently caused by a worn oil gasket or the oil pan itself.

What causes an oil gasket to leak?

The oil pan gasket or oil gasket, like most vehicle components, will go through normal wear and tear as your vehicle adds on the miles. The gasket becomes so worn out that it can no longer seal the oil in. Extreme weather, the speed you're driving, and the state of the oil are all factors that might put strain on the oil pan and gasket. You might drive over a few potholes and kick up debris into your oil pan. All of this wear and tear, as well as the heat and passage of time, can take their toll. As a result, the gasket can simply wear out and leak over time.

Gaskets are required to perform their duties inside your engine, which is a harsh environment to function in. Even the best gasket or seal will develop leaks after prolonged exposure to high temperatures, high pressures, vibrations, and contact with hot fluids.

Gasket leaks, with the exception of very rare occurrences of catastrophic failure, begin as little drops that you may initially detect as spots under your car. If not addressed, these may cause unattractive stains to emerge on your parking place, which may ultimately grow more widespread if not addressed.

There's a natural desire to discount the significance of minor oil spills and put them on the back burner for later – but don't do it. If little leaks are neglected, they can lead to significant costs in the future. What appears to be a little issue can soon escalate into a significant problem. Even a minor leak can quickly lead to the loss of a quart of oil.

Over time the oil gasket begins to dry and crack, just like any other rubber component, stopping them from performing their function. An oil leak will be your biggest signal if the oil pan is deformed and the gasket has failed. But you may also notice the following:

Oil leaks are notoriously difficult to spot, making a leak from the oil pan gasket nearly impossible to detect. An oil level that is lower than usual is a solid symptom of an oil leak. The oil light on your car may also illuminate, warning you of low oil levels.

Riding with a low or no oil level is a recipe for costly repairs. Many drivers are unaware that driving with a low oil level might result in excessive engine heat. Higher engine temperatures will degrade the remaining oil's lubricating capabilities, causing damage to pistons, piston rings, valve lifters, and engine bearings as well as excessive wear. High engine temperatures may aggravate gasket leaking, resulting in a cascade of events that may drain your pocketbook with a costly repair price.

Motor oil, like coolant, aids in keeping the engine cool by minimizing friction and heat. If oil levels fall below a certain level, the engine will struggle to prevent heat from being generated by friction, resulting in an overheated engine. If the engine overheats for too long, it will be damaged unless the gasket that is likely causing the leak is replaced.

Oil Puddles Under the Vehicle

Puddles under the car, for whatever reason, are always a source of worry. While oil might leak for a variety of causes, it's possible that this is due to a faulty oil pan gasket. Because of its rubber composition, it breaks down with age and persistent heat exposure, causing it to leak. If you detect a small puddle of dark brown or black fluid underneath your engine you should investigate further to discover if the leak is coming from the oil pan or somewhere else.

Black smoke rising from under the hood is the most common symptom that the oil pan gasket has failed. This could come as a result of oil seeping onto the very hot exhaust manifold. Allowing this situation to persist may result in components such as oxygen sensors or other components becoming damaged as a result of being drenched in oil, causing sensors and gaskets to fail.

Can you drive with an oil gasket leak?

It's usually best not to drive if your vehicle has an oil leak, although short distance drives (less than 10 miles) are less risky when it comes to dangerously low oil levels. Driving with an oil leak can be risky because it can create a fire. If the leak isn't fixed right away, the engine will wear out prematurely, causing bigger difficulties.

Driving with an oil leak adds to your vehicle's wear and tear as well as the risk of engine damage. Don't lose time if you have an oil leak; go to the mechanic right away. He or she will know what causes an oil leak, what to look for, and how to repair it.

Can I fix an oil pan leak myself?

You can learn how to fix an oil leak before taking your car to the mechanic for a high repair charge. You can handle any oil leak problem on your vehicle with a little know-how and a lot of patience. To figure out how to fix an oil leak, you must first determine what caused the leak. It's pointless to cure an issue just for it to resurface. A deteriorated engine gasket is the most prevalent cause of an oil leak.

An engine gasket is a seal that keeps lubricants from leaking out. You will begin to lose vehicle fluids if the gasket breaks. You will most likely spill motor oil. An oil pan leak, oil seals, or poor connections are some of the less prevalent reasons for oil leaks. You'll want to look at these four areas to figure out what's causing the leak.

Now that you know what could be causing your car to leak oil, it's time to get beneath it and figure out what's causing the problem. You'll want to start by inspecting the oil pan seals. You should also inspect the oil pan plug. After you've checked the oil pan, move on to the timing cover seal and valve cover gaskets. The oil pressure sensor, the oil filter, and the oil cap are all areas to look for a suspected leak. It's likely that you have many oil leaks if you have an older vehicle with a lot of damaged parts.

Using a stop leak additive or a high mileage oil blend is one of the simplest ways to remedy the leak yourself. Such treatments can soften and condition your car's rubber seals, thereby stopping and preventing further leaks. It could take many hundred miles of driving to completely seal the leak.

It's not always as difficult as you would think to fix an oil pan leak using tools. Only a few hand tools, a torque wrench, and a car jack with stands or ramps are required. First, jack up the automobile so you can get to the oil pan safely. Check the oil pan for any loose bolts now.

These bolts might loosen over time, and loose bolts leak. Proceed to the timing belt cover and valve covers after tightening all of the bolts on the oil pan. Keep in mind that certain automobile models need tightening nuts in a specific pattern to a specific tolerance level. For further information, consult a service manual or repair guide.

It's time to put everything to the test once you think you've solved the problem. Fill up your oil tank with around a quart of oil. After that, you'll want to start the car with the hood up. While the automobile is running, inspect the top of the engine. You may discover that oil is leaking from the gasket or the oil cap, and the engine may begin to smoke as a result of the oil burning. It's critical to understand what causes oil leaks in all areas of your car.

After a few minutes of driving, park the car in another area and examine the driveway for any oil leaks that have developed. If you still see an oil puddle, double-check that your bolts are properly tightened. Make that everything is in working order, from the oil pan to the gaskets and the oil cap. After you've completed the repair, double-check to ensure that the leak is no longer present.

How much does it cost to replace oil gasket?

The good news is that the oil gasket is rather affordable. The cost will vary depending on whether your car requires a liquid gasket or a pre-formed rubber gasket. The kind and model of car might have a big impact on the installation. Some oil pans are easily accessible, and labor will cost around $100.

To obtain access to other pans, the exhaust and suspension components must be removed. In these cases, labor costs might range from $300 to $400, with some German models costing even more. Keep in mind that prices will vary depending on your region and the brand and model of your vehicle.

Check your oil levels frequently to verify they are normal, as low oil levels indicate that something is amiss. Do it once a week, especially if your car has traveled a long distance. Running your engine with insufficient oil can result in serious engine damage. Always take your car to a trusted automotive technician if your engine shows signs of trouble.

Oil gasket issues might not be a repair that will leave you on the side of the road. At the very least, if it isn't ignored indefinitely. Taking care of small leaks, on the other hand, can help extend engine life if you plan to drive your car for many years and cover a lot of miles. If you're adding more than a quart of oil every now and then, plan the repair before the leak gets to the point where the oil level is critically low.

Make an appointment with a good mechanic who specializes in engine repair. The majority of oil pan gaskets may be replaced the same day, however there are a few exceptions that require additional time. A good technician will tell us how long the repair will take and how long we will be without our automobile.

Allowing your engine to smoke as a result of a leak can cause extra damage to oxygen sensors and other components due to oil saturation, which can lead to the failure of sensors, gaskets, and other critical components. Furthermore, overheated engines can result in major and permanent engine damage, and you might have to deal with expensive replacement or extensive repairs.