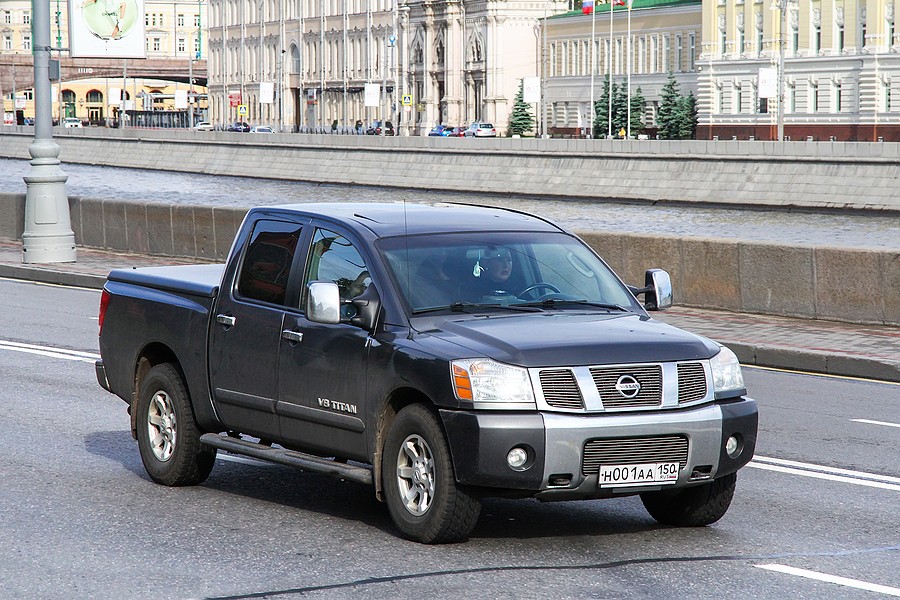 Regarding the most severe problems for the entire production of the Nissan Titan, there were a few key problems that really stood out amongst all model years.

Drivetrain – One of the worst problems regarding the Titan is the powertrain, which had the most issues in the 2004 edition, and is considered the worst model year for the titan due to the severity and number of complaints. Drivers experienced various issues like leaks in the rear components, failing rear and front differentials, and a heavy clunking noise.

Faulty Brakes – Another issue with the same model year is the brake malfunctions that can cause safety issues, with the brake pedals feeling too soft, a loud grinding noise being heard, and the necessity to replace the brakes multiple times. In addition, other owners reported that their front brake rotors warped over time, causing excessive vibration.

Rear Differential Failure – One of the biggest problems in the 2004 model year drivetrain was the rear differential, with it most commonly occurring with the 5.6-liter V8 engine. Drivers often heard a loud clunking noise or explosion before the rear wheels completely lock up while driving.

Rear axle failure – The worst problem for all models of the Titan involve the rear axle failure in the 2005 Titan, with the average cost to fix coming out to around $3,100 and happening at around 78,000 miles. Drivers experienced no warning before the axle failures occurred, and they had to pay for the repairs since Nissan never issued any recalls.

Regarding the first year of the Nissan Titan, this was also one of the worst with the most user complaints out of all generations, the 2004 is only beaten out by the worst model year by the 2005. Let’s see why.

The main user concerns for the 2014 Nissan include the drivetrain and the cooling system, while the NHTSA lodged nearly 450 complaints regarding the drivetrain. The drivetrain issues for users involve the rear differential failing, the front differential failing, the rear wheel seals leaking, the clunking noise occurring when in reverse, and the cooling system getting damaged over time. The typical repair cost to fix the rear differential alone is almost $3,000 and occurs at around 95,000 miles, with users stating that the wheels can lock up during use and cause a dangerous situation.

The main issues with the 2005 Nissan Titan also involve the drivetrain, but are followed up by the electrical system. The drivetrain concerns are similar to the previous year, with users stating that there was rear axle failure, the seals leak, the differential can fail, and the front differential can fail and leak. The typical repair cost for these issues is around $3,100 and occurs around 78,000 miles.

The other category of concern for the 205 Titan was the electrical system, with users stating that the 4×4 does not work, the car shuts down while driving, the BCM can fail, the cruise control switch failed, and the wiring harness had issues. The typical repair occurs at around 73,000 miles and users state that the 4×4 lights come on and the ABS can quit working while in use.

The 2006 Titan dealt with similar drivetrain problems,although had about half the number of complaints as previous years, showing that Nissan was making a serious effort to reduce the differential and powertrain issues. The second category of complaints regarding the NHTSA dealt with the engine.

The NHTSA cited over 60 complaints for the engine, the engine cooling, the vehicle speed control, and the cooling mechanisms. These issues have resulted in 1 fire and occur at around 86,000 miles, with users stating that the check engine light turns on, smoke is pouring out of the exhaust, and the transition is sluggish during use.

The 2008 Titan had some more issues than the previous year, but these instead dealt with separate categories instead of the drivetrain. The main user concerns focused on the transmission and the suspension, with the NHTSA lodging the most complaints about the drivetrain and engine.

The transmission issues for the user dealt with the gear shifter locking up, the coolant leaking into the transmission, the car going into failure during reverse, and the transmission cooler line breaking. The repair for these issues generally occurs at around 101,000 miles and deals with the shifter not being able to move from the park position.

The user issues with the suspension deal with the ball joints failing, the outer tie rod failing, the premature swing arm bushing failing, and the upper control arm failing, with the typical repair cost coming out to around $450 and occurring at around 130,000 miles.

The 2009 had very few problems compared to the previous years, with the only concerns being for relatively minor issues with the users citing the most complaints regarding the AC, heater, interior accessories, and the body and paint. The users complained about the clear coat peeling off, the AC and heater not being able to shut off, and the ceiling entertainment system falling.

The 2010 Nissan Titan had the most problems with similar categories, with the most complaints being about minor cosmetic issues, focusing on the AC and heater, the windows and windshield, and the body and paint problems. The main complaints about the AC and heater dealt with the blower not working properly, the car making a clicking noise, the fan speed fluctuating, the heater blowing cold air, and the car not having any cabin filters, with the problems generally happening at around 110,000 miles.

The concerns about the windows and windshield only dealt with water noise at the top of the windshield, with the problems occurring very early on at just about 12,000 miles, with users stating that they might have to replace the entire windshield.

The main concerns regarding the Nissan Titan are different from the previous years, with the users stating that the suspension had issues and the AC and heater had minor problems. The suspension problems dealt with the premature shock failure and the tires wearing thin after use, with the typical repair cost coming out ato around $500 and occurring at around 48,000 miles, with the most common solution being to replace the shock.

The 2012-2015 model years were 4 years of very few problems, especially in comparison to the first two years of production. The categories all had very few user complaints and NHTSA issues. The main category of complaints for the 2012 dealt with the body and paint concerns, which focused on relatively minor issues of users stating that the car can rust prematurely.

The 2013 Nissan Titan had the most user complaints with the brakes and the exhaust, with users stating that the brakes underwent premature wear and can occur very early on at just below 30,000 miles. The following year of Titan saw the highest number of complaints regarding the electrical system, with users stating that the dashboard warning lights all turned on during use.

The 2015 was the last year of very few complaints during this stretch, with users having minimal complaints regarding the interior accessories and the drivetrain, with owners stating that the door panel could warp after prolonged use, occurring very early on at around 5,000 miles.

For the user complaints of the transmission, owners stated that the car shifts very hard and lurches during acceleration, and the car can stop moving while driving, with the typical repair occurring at just below 10,000 miles.

Regarding the early Nissan Titan, there were various recalls that need to be addressed for the earliest production models. One of the earliest recalls happened in 2004, with the subject being the seat belt anchorage. An area on the rear pillar where the rear seat belt upper anchor might not be strong enough to absorb the right amount of energy in the event of a crash.

Another early recall was the wire harness recall in 2006, where the wires for the seat belts and speaker wires break and make contact, possibly causing a pre-tensioner to deploy. If this happens when the seat belt is retracted, it will make it not possible for the driver to use the seat belt. If one of the wires on the harness breaks, the chance of an injury severely increases.

The 2020 Nissan Titan earned the #5 spot in the Full Size Pickup Trucks category, with the car also earning a 7.4 out of 10. The Car US News Scorecard showed the Titan earned a critics’ rating of 7.2, the performance rating of 7.3 out of 10, interior rating of 7.2, and the JD Power Reliability to earn 3 out of 5 stars. The Titan, unfortunately, placed near the bottom in terms of the full size pickup truck class due to the low hauling and towing capacity and some lack of style in the interior of the cab.

The pros of the Nissan Titan involve the long list of standard infotainment and safety features, the high warranty, and the maximum payload for the class of the car. The cons of the Nissan Titan involve the car only having one powertrain choice, the crew cab not being as spacious as the competition, the lower towing capacity, and the unimpressive interior quality and design.