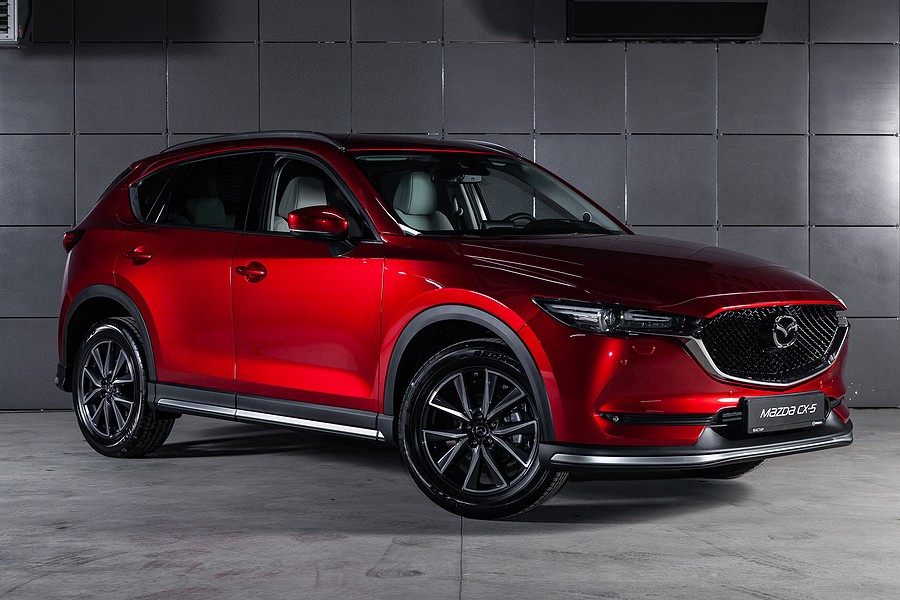 The Mazda CX5 is a compact crossover produced and manufactured by Mazda, a Japanese multinational automaker, since the 2013 model year. The first car ever featuring the new Soul of Motion design language, this car shares a similar platform with both the Mazda3 and the Mazda6.

With the first generation debuting for the 2013 model year and ending in 2017, the second generation has been produced on the market since 2017 and still remains a top seller on the market today. However, despite being well liked, there are numerous Mazda CX5 problems that you need to pay attention to.

Regarding every single model year and issue for this type of car, there are three that stand out as the worst. The third worst issue regarding the Mazda CX5 is the windshield easily breaking in the 2016 CX5, with the average cost to fix being around $400 and the average mileage of the issue being 19,000 miles.

The second worst issue for this type of car is the windshield easily cracking in the 2015 CX5 model, with the average cost to fix this issue coming in at around $700 and occurring at an average mileage of 26,000 miles.

The worst Mazda CX5 problem is the daytime running LED light causing the electrical system to fail in the 2016 CX5. This problem costs around $1,100 to fix and occurs usually at around 43,000 miles.

The top categories of concern regarding the Mazda CX5 in the 2013 model year was the engine system, the brake system, the interior accessories, and the windows and windshield. Along with the owner's concerns, the NHTSA also cited numerous complaints for the engines, brakes, and the electrical system.

To fix the losing power while driving, the typical repair cost comes out to around $500 to replace the engine ignition coils at around 34,000 miles, with most users stating that the ignition coil has become damaged very early on. To fix the issue of the engine hesitation, this problem occurs at around 7,000 miles, and has users stating that the car hesitates at different speeds on the highway. Any Mazda CX5 problems that deal directly with the engine are very important to the overall lifespan of the car.

In addition to the engine issues, the braking system has various complaints from owners, who have stated that the rotors and pads have worn out, there is a grinding sound from the brakes, and the pedal goes to the floor while trying to stop the car on time. The best fix for the rotors and pads wearing out is to replace all pads and rotors for an average repair cost of around $420 at 24,000 miles. To fix the grinding sound from brakes, the most common solution is to replace the pads and rotors for around $310 at an average mileage of a35,000 miles.

The main concerns regarding the interior accessories in the Mazda CX5 problems includes the blind spot monitoring not working, the amplifier stopping working, the dash warning lights coming on, the GPS not working correctly, the power seat adjust operating unintentionally, premature wear of cloth on the armrest, and warning lights staying on long after idle or the problem has been fixed. Although not severe issues, these Mazda CX5 problems are annoying and hard to fix.

The top categories of concern regarding the following year of the Mazda CX5 problems include the electrical system, which also had nearly 100 NHTSA complaints, the engine category, and the interior accessories.

Regarding the electrical system and the Mazda CX5 problems, the main concerns focused on the car not being able to completely shut down, the electrical shutting down unintentionally, the car not starting, the “key not found” alert occurring randomly, and multiple dashboard lights turning on during use. To fix the issue of the car not being able to shut down, the typical repair cost comes out to just under $300 and occurs at nearly 55,000 miles, with the most common solutions being to put the car in park, replace the shift sensor, or fix the relay problem.

The main issues about the engine in the Mazda CX5 problems involve the engine revving when stopped before making a loud thunk and turning into gear, the car lurching forward during a complete stop, the car losing acceleration power, the check engine light turning on, the engine not being able to totally shut off after use, excessive oil consumption, and ignition coil failure.

The last category of concern focuses on the interior accessories when dealing with the common Mazda CX5 problems. The main issues are the USB media playback not working correctly, backup camera not working, the blind spot monitor system not showing accurate pictures, premature seat wear, rattling sound while driving, seat heating up and switching off, and the uncomfortable seats.

Unlike the previous two model years, the 2015 did fairly well in terms of it reduced the prevalence and severity of the Mazda CX5 problems. The main categories of concern were fairly minor, focusing on the windows and windshield, interior accessories, and the brakes.

The window and windshield concerns mainly focus on the visibility of the windshield, the windshield easily cracking, sunroof exploding, and the power devices and controls not working correctly. The windshield cracking can be repaired by paying nearly $800 to replace the entire windshield, generally occurring at an average mileage of 26,500 miles.

To remedy the Mazda CX5 problems in the interior accessories category, owners have to deal with a USB not being updated, the Bluetooth connections not staying set, the Bose sound system being faulty and scratchy, and the door actuators squeaking during use. Fortunately for the Mazda owners, all of these issues are fairly inexpensive and easy to fix.

Regarding the braking system and the Mazda CX5 problems, the main concerns focus on the brakes not working properly, the city brake engaging for no reason, the electronic park brake not working, and sudden acceleration while you try to break your car. To fix your brakes not working correctly the most common repair cost is around $400 to replace the brakes at nearly 16,000 miles.

Unfortunately for the Mazda company, the Mazda CX5 problems skyrocketed in 2016. Worse than the 2013 and 2014 model year, the 2016 has a high number of both user and NHTSA complaints. Both complained about the lights in the car, with the NHTSA citing over 100 complaints, while the users had numerous issues with the windows and windshield, the brakes, and the interior accessories.

The last category of complaints focused on the interior accessories, with the top issues being the infotainment system not booting up, the Bluetooth not working, correctly the clock malfunctioning, the digital radio skipping, the GPS not working well, the issues with the USB port, the noisy door lock actuators, and the rear view camera only working intermittently. The typical repair cost for the infotainment system not working comes to around $1,700 and occurs at around 54,000 miles.

Fortunately for the car company, the Mazda CX5 problems significantly declined in the following model year, with there being very few NHTSA complaints, and the user complaints mainly focusing on the transmission and the braking system.

The main Mazda CX5 problems regarding the transmission focus on the vibration during cold weather and temperatures, the car jerking into second gear when cold, and the car being stuck in gear. To fix the vibrations, this generally has to happen at around 5,000 miles on average.

The pros of the 2019 Mazda CX5 is the agile and easy to use handling, the cushioned and comfortable ride, a wide variety of engine choices to suit your needs, and a high end and luxurious cabin space. However, the negatives of the Mazda CX5 and the Mazda CX5 problems with this model year is the below average cargo capacity, subpar predicted reliability and safety rating, and the tough to use infotainment system.

Despite this car earning an 8.1 out of 10 overall in the Car US News Scorecard ranking, the 2019 Mazda CX5 problems caused it to only earn a 2.5 out of 5 stars for the JD Power reliability ranking, which is sub par compared to other similar cars.

Along with these high rankings, the car US News scorecard gave this car a 9.8 out of 10 in the critics’ rating, 8.6 in the performance category, 8.0 in the interior category, 9.9 out of 10 for safety, and earned 3 out of 5 for the JD Power reliability ranking.

In addition to the high score on the scorecard, this Mazda CX5 has numerous pros and positive features, like terrific and agile handling, good gas mileage, an upscale and comfortable interior and user friendly tech features that make the car easy to use. However, the Mazda CX5 problems in this car include an above average price compared to other options and an out of date infotainment system that is behind the times.